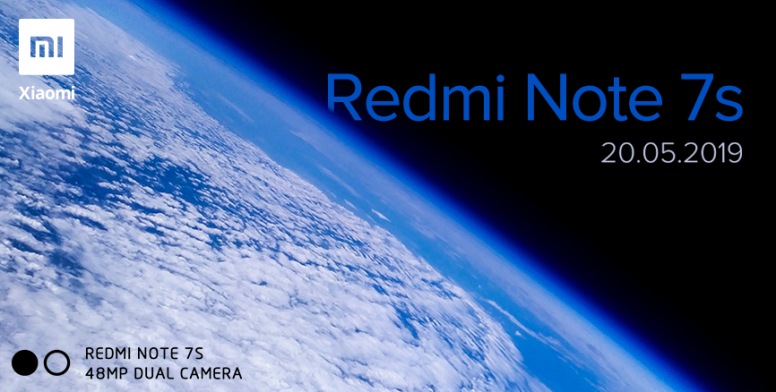 Xiaomi Redmi Note 7 and Redmi Note 7 Pro sales crossed 2 million units recently and alongside that news, Xiaomi also announced that an all-new 48MP camera phone is coming soon. Today, Xiaomi has officially confirmed that the Redmi Note 7S with a 48MP camera is launching in India next week.

Redmi India posted a tweet today that said ‘This is the #RedmiNote you’ve been waiting for! 👀 #RedmiNote7S with a Super #48MP camera is coming on 20th May!’. This confirms that the Redmi Note 7S is launching in India on 20th May 2019.

This is the #RedmiNote you’ve been waiting for! 👀#RedmiNote7S with a Super #48MP camera is coming on 20th May!

There are no details on the specification of the Redmi Note 7S expect the information that will sport a 48MP rear camera. According to the image posted by Xiaomi, it will be a Dual camera setup on the Note 7S and is expected to be a 48MP + 5MP combination.

As Xiaomi teased this smartphone with the tagline ’48MP for everyone’, it might carry the same camera setup as seen on the Redmi Note 7 Pro. To recall, Redmi Note 7 Pro sports a 48-megapixel rear camera with 1/2″ Sony IMX586 sensor with f/1.79 aperture. It offers 12MP output by default using super pixel tech, but you can enable 48MP output in Pro mode. It has a 5-megapixel secondary camera for portrait shots and also comes with AI features such as steady handheld night photography. There is a 13-megapixel camera on the front with AI beautify and AI portrait features, as well as AI face unlock.

We should know more details once the smartphone launches on Monday.