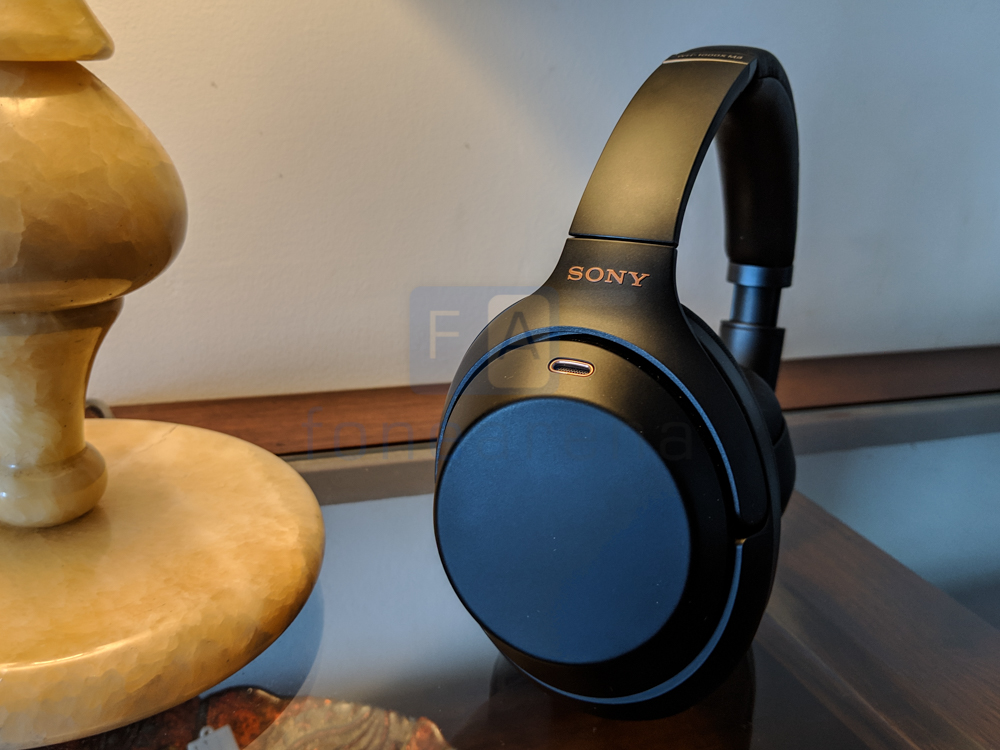 There are few products that manage to take a giant step forward with every successive iteration. Sony’s 1000XM line of headphones is one such product that not only excels on their own but has taken the competition head-on.  The XM2 doubled battery but generally played it safe. With the WH-1000XM3 though, Sony has gone back to the drawing board and is making massive changes all around. What does it mean for the lineup? Find out in our review. 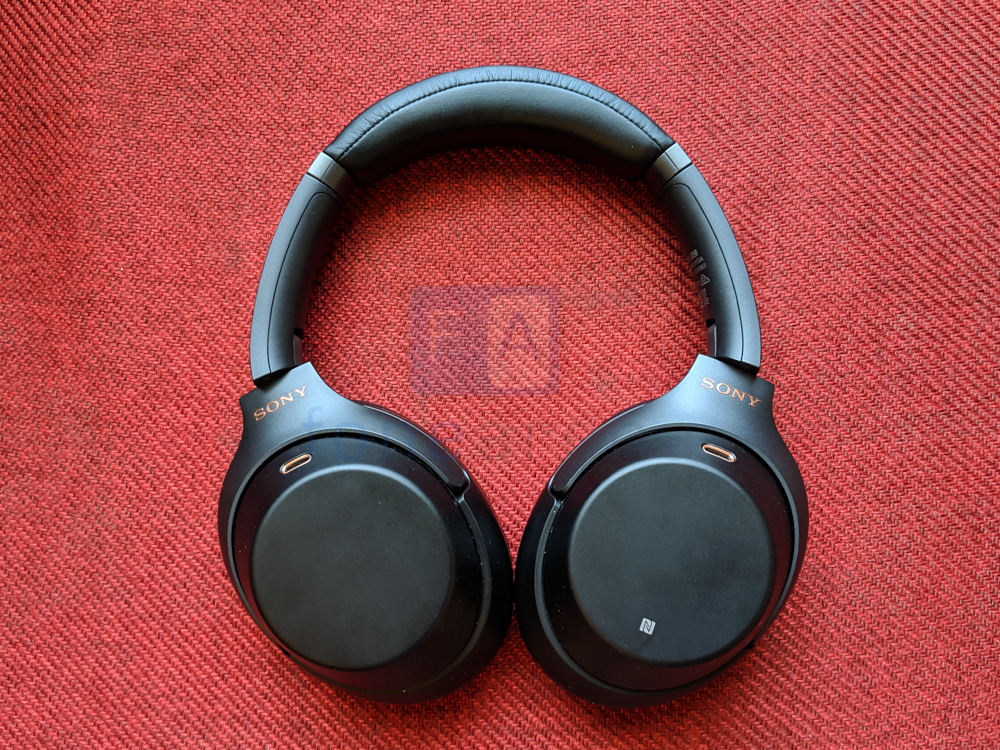 In terms of design, Sony has completely re-engineered the headphone and the changes are almost universally positive. The headphone is flat out more comfortable to wear. From the pillowy faux-leather ear pads to the overall weight reduction, you can wear the MDR-1000XM3 for hours on end without any fatigue. During my testing period, I wore the headphone on flights, long bus rides and occasionally even when trying to sleep. There’s more padding at the top which helps reduce pressure and Sony has reworked the design of the ear cups giving it a longer, more oval shape. The entire headphone now sits closer to the ears, which generally makes them more compact to carry around as well. Of course, like all the previous models, the headphone is fully collapsible which makes them easy enough to stash away in the corner of a bag. 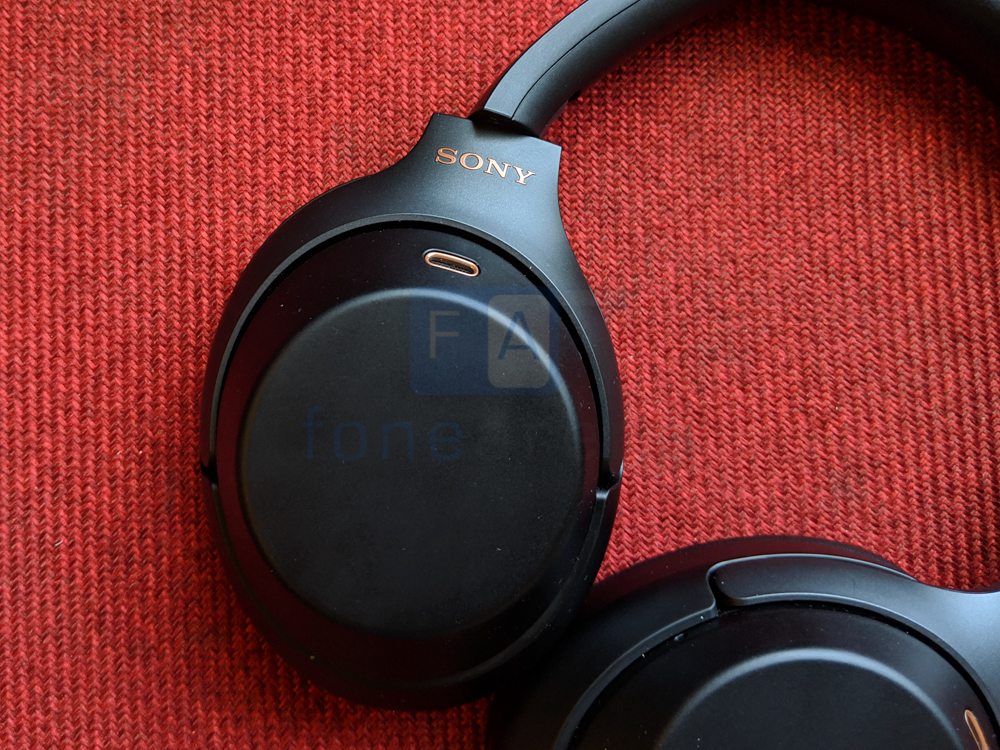 Worth a mention are the new rose gold highlights which look really classy and a certain chic to the design. Sony has gotten rid of the textured leather-like pattern from the ear cups and has opted for a smooth, hard plastic finish. The more subdued design looks great and is in line with current fashion trends. 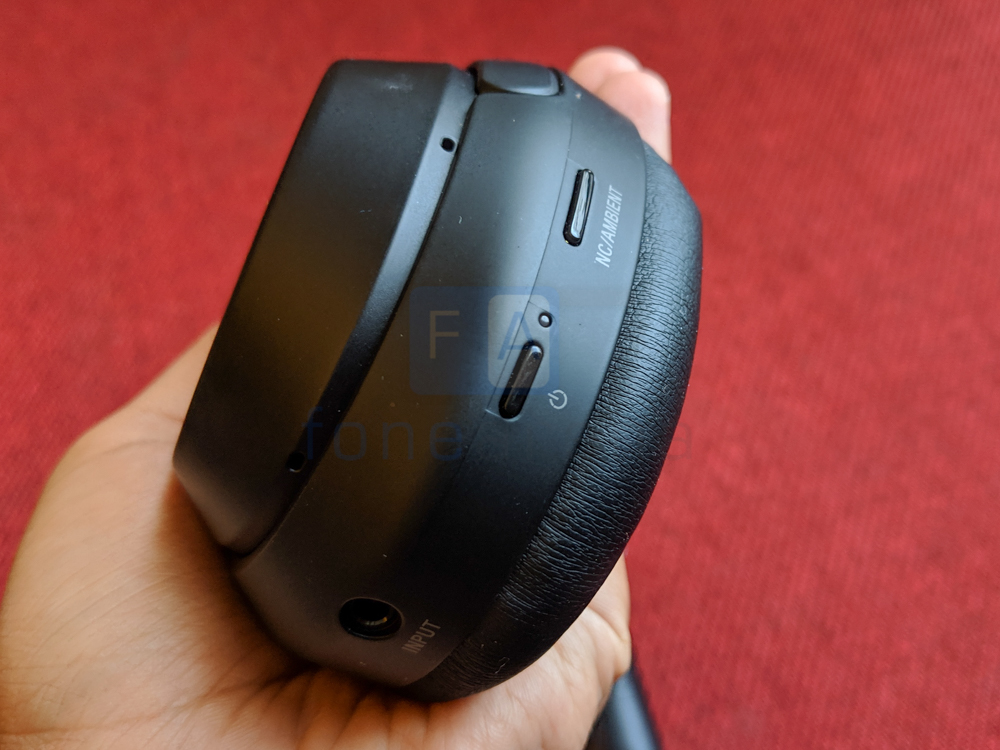 The control scheme remains similar to the 1000XM2 and the 1000XM before it. Buttons on left ear cup control power, pairing as well as the ambient noise, noise cancellation options. You’ll also find a USB Type C charging port and a 3.5mm audio jack. The right side ear cup meanwhile includes touch controls as well as the nifty gesture for letting in ambient sound. More on that in a bit. Back to the touch controls, the MDR 1000XM3 relies on a series of taps and swipes to change tracks, volume levels and more. Unfortunately, this works better in theory than practice. There’s a certain latency in swiping up and down for volume controls and the time that it takes to react. The same goes for swiping forward and backwards for track controls.

Let me put it like this, the noise cancellation on the MDR-1000XM3 not only puts other headphones to shame but literally blows away the competition. Putting these on is liking bringing down a veil of silence wrapped up in a soft cushion that gently caresses your ear. 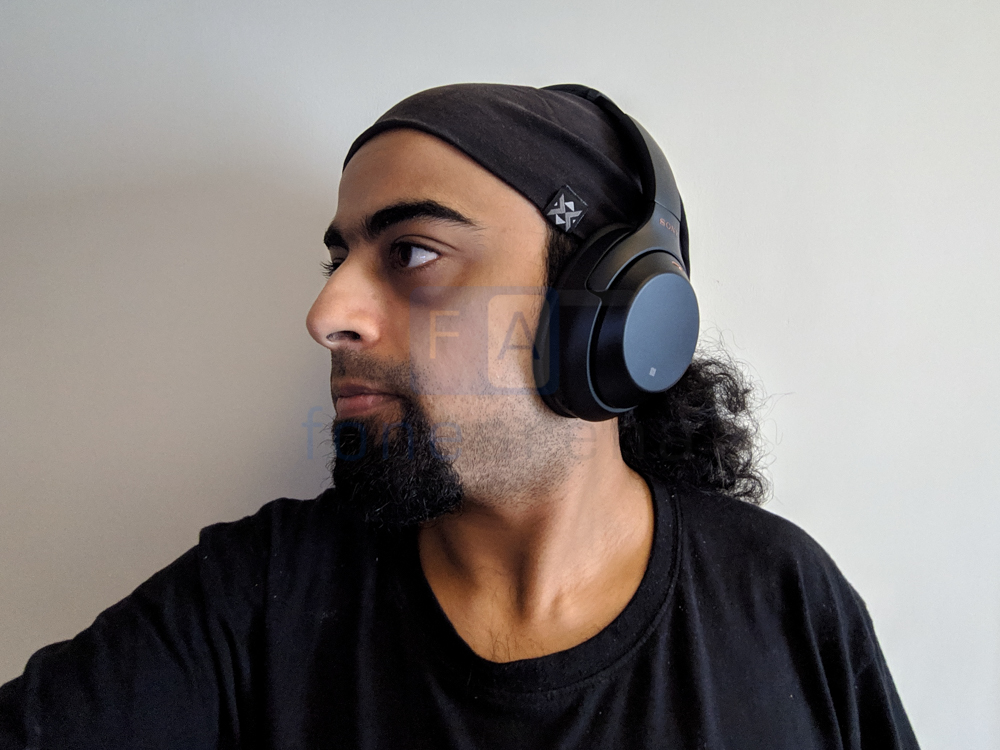 I’ve tried the Bose QC35, the B&W PX, Sennheiser HD4.50 and other noise cancelling headphones and while some might get close, none of them can match what Sony is pulling off with the XM3. The company has built a dedicated chip to process noise cancellation and the results are astounding. Year on year, the XM3 has a significantly lower white noise floor, something I’m particularly sensitive to. 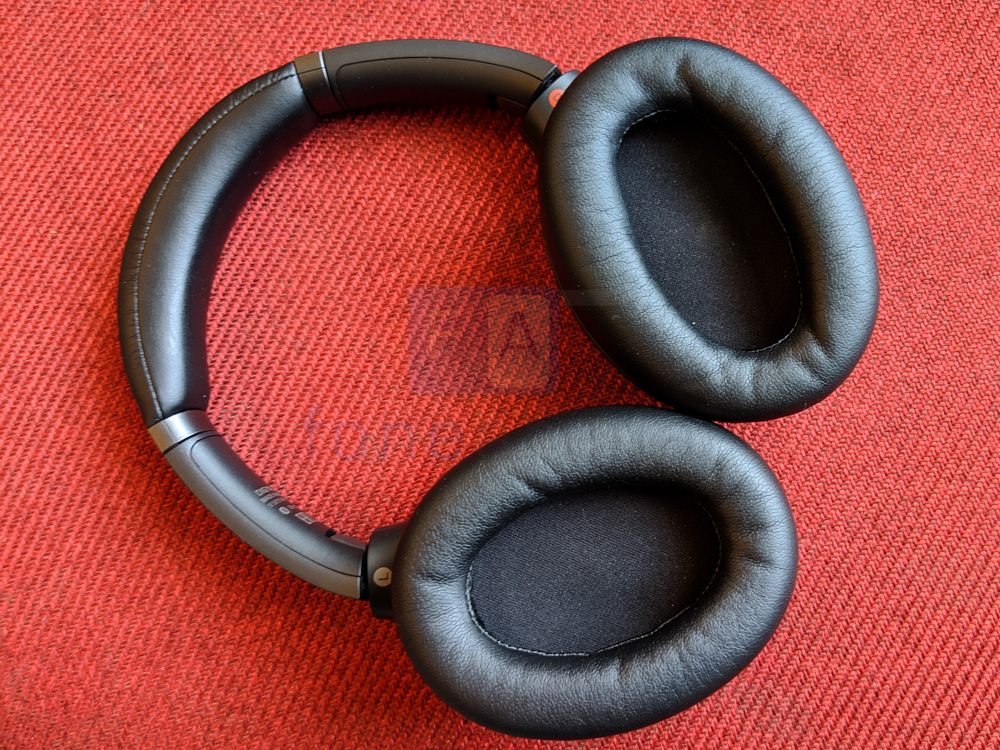 Noise cancellation obviously doesn’t mean that you won’t hear anything at all. People talking loudly near you will continue to be audible albeit at a hushed down level. Loud droning noise from vehicles, jet engines, fans, air conditioners is what the XM3 excels at cutting out. Furthermore, there are multiple ambient noise modes that you can adjust via the app. These modes will let you pipe in a preferred amount of ambient noise in case you like to be a bit more aware of your surroundings. There’s also the ability to focus on voice which is quite nifty. With the appropriate settings, you’ll be able to reduce ambient noise while still being able to hold a conversation.

Even more useful is the ability to hold down on the right side earcup which completely cuts off noise cancellation and activates the ambient mode. You’ll look funny talking to someone with your hand on your head but it works great if you’re just trying to listen to airport announcements or to the cashier at a store.

Despite Sony’s audio pedigree, the company has struggled in the past to find the right mix of sound signature for the 1000X series. The XM3 takes a big step forward in finding the right balance. Now, let it be clear, these are not audiophile grade headphones and the sound is anything but clinical and flat. There’s a very pronounced bass boost but the lush, warm sound lends itself to general consumer preferences. 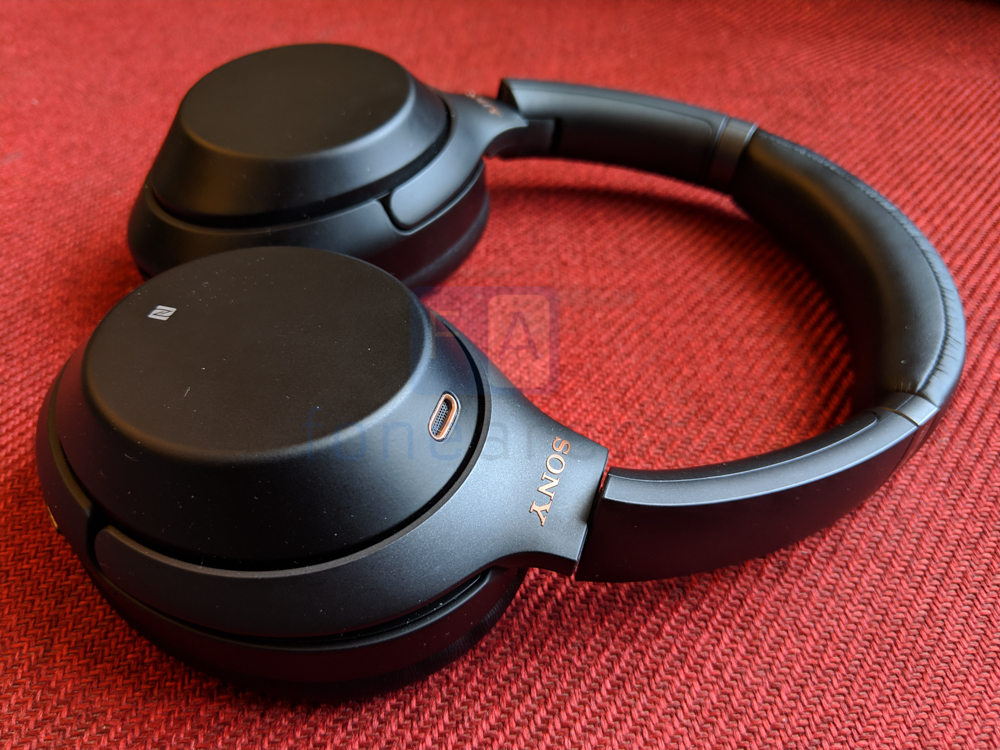 The headphones do a good job of resolving highs without them becoming fatiguing. The mids are present but don’t stand out much. Bass on the 1000XM3 is big on volume but comes across as bloated. Technically, there’s a lot that is wrong with the sound signature but, you know what, there are enough headphones out there that offer accurate sound. The XM3 makes music enjoyable to listen to when you’re on the go and that’s what the vast majority really cares about. In case sheer audio quality is what you care for, the Beyerdynamic Aventho and Audeze Mobius will certainly be better options.

The 1000XM3 supports all the latest codecs for wireless audio transfer including LDAC, AptX HD, AptX, AAC and SBC. Unfortunately, there is a caveat here. While you can certainly use LDAC to get near lossless quality music from your phone, using the app to make any adjustments to the sound quality requires you to drop down to SBC. On a high-end headphone like the MDR1000XM3, the limitations of a low bandwidth codec like SBC are definitely audible and it is far from an ideal way to listen to music. I would’ve loved the ability to use the equalizer to tone down the bass a bit in AptX or AptX HD mode in case LDAC had bandwidth related limits. Perhaps with next year’s revision.

I’m not entirely sure if it is a bug but answering calls using the XM3 often triggered the ambient noise microphones and I could hear my own voice amplified. This was fairly disconcerting and others could not hear my voice all that clearly. Meanwhile, the headphone supports Google Assistant and Siri. You can configure the ambient noise button to act as a way to invoke your smart assistant of choice. It works but like the touch controls, there’s just a bit of latency which breaks the seamlessness of the experience. I also did not find it very useful to call out for simple things like changing tracks, a task that is better accomplished by simply pulling out your phone.

Sony claims AND delivers a solid 30 hours of usage. With the volume set to a medium level and you really don’t need to go higher than that, the headphone easily clocked close to 30 hours. If I had to make a guess, I’d say that the headphone might actually last a bit more since I still haven’t felt the need to charge the XM3 in over a week of extended use. 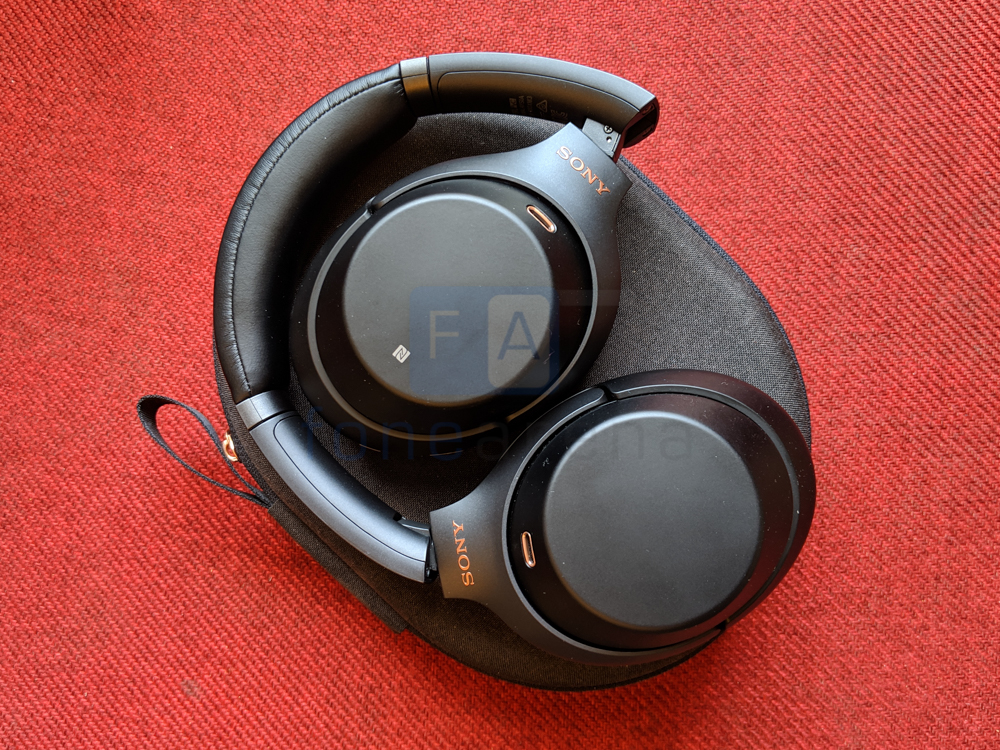 If you compulsively troll audiophile forums, the Sony WH-1000XM3 is definitely not meant for you. It needs you to step back from the technicalities of audio reproduction and just give in to the warm embrace of the sound of music. Close your eyes and let the noise cancellation work its magic as it wraps you in a cocoon where it is just you and the music. Add to that the reliable wireless capability and solid battery life and this is close to the best wireless headphone right now for the general consumer. It’s not perfect and I’ve detailed the issues with the app and microphone but I’d be nitpicking if I called these out as deal breakers. The Sony WH-1000XM3 are priced at Rs. 29,990 and are worth every Rupee you spend on them. You can get it from Amazon.in.