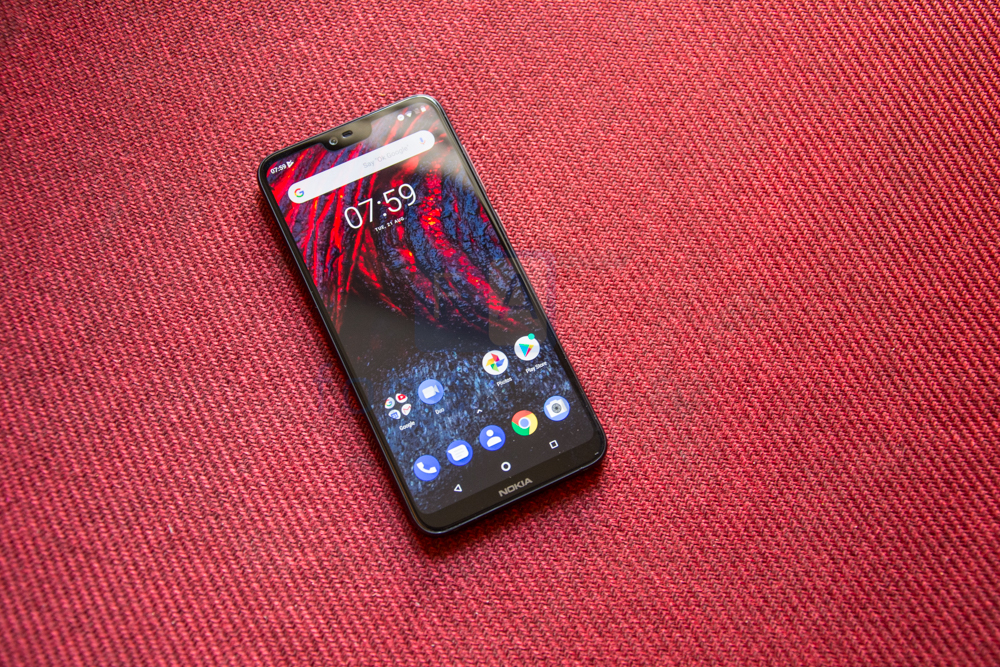 For a company as young as HMD Global, they’ve sure have come a long way. Be it the lineup itself or the pace at which the products have improved. We found the Nokia 8 Sirocco and the 7 Plus both to be rather excellent products with a focus on build quality, design and stock Android of course. With the Nokia 6.1 Plus, we’re noticing the same level of refinement at an even more affordable price point. Follow along as we check out the Nokia 6.1 Plus in our full review.

Remember the glass sandwich design of the Nokia 8 Sirocco edition? Well, the company has followed the same design guidelines on the 6.1 Plus. Built around a blacked out central aluminium frame, the front and the back are made of toughened Gorilla Glass 3. The central frame pillows out ever so slightly, making the phone fit that much better in your hands. 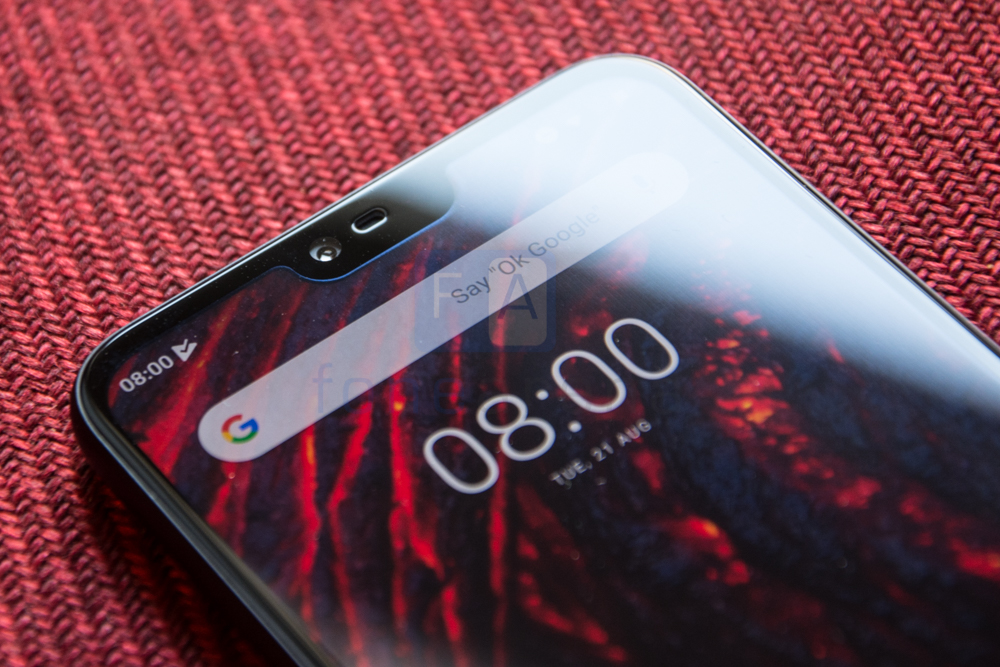 The front is essentially an all screen device with a 5.8″ panel finding centre stage within the frame. Yes, the phone has a notch at the top and a small chin at the bottom. We found the branding on the lower layer a bit superfluous. The bezels at the sides are satisfactorily minimal. In fact our favourite part aspect of the phone has to be its ergonomics. The phone is exceedingly comfortable to hold. For better or worse, the compact dimensions and general density of the hardware brings to mind the iPhone X. 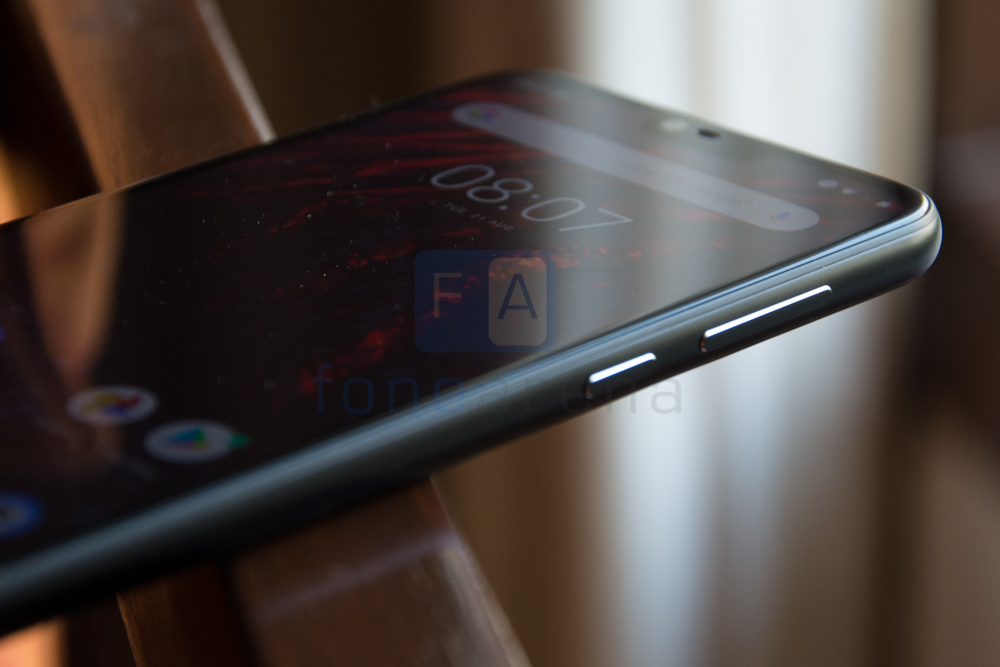 The right side has the volume rocker and power button. In typical Nokia fashion, the buttons have excellent tactile feedback. Its the little things like tolerance levels on buttons that really differentiate the build quality of a high end phone from a midrange model. Much larger companies have failed on this in the past and HMD is due credit for upholding the same standards that the classic Nokia lineup was known for. Along the bottom edge is the USB Type C port alongside the speaker grille. The left side has a hybrid SIM slot while at the top you’ll find the 3.5mm audio jack. 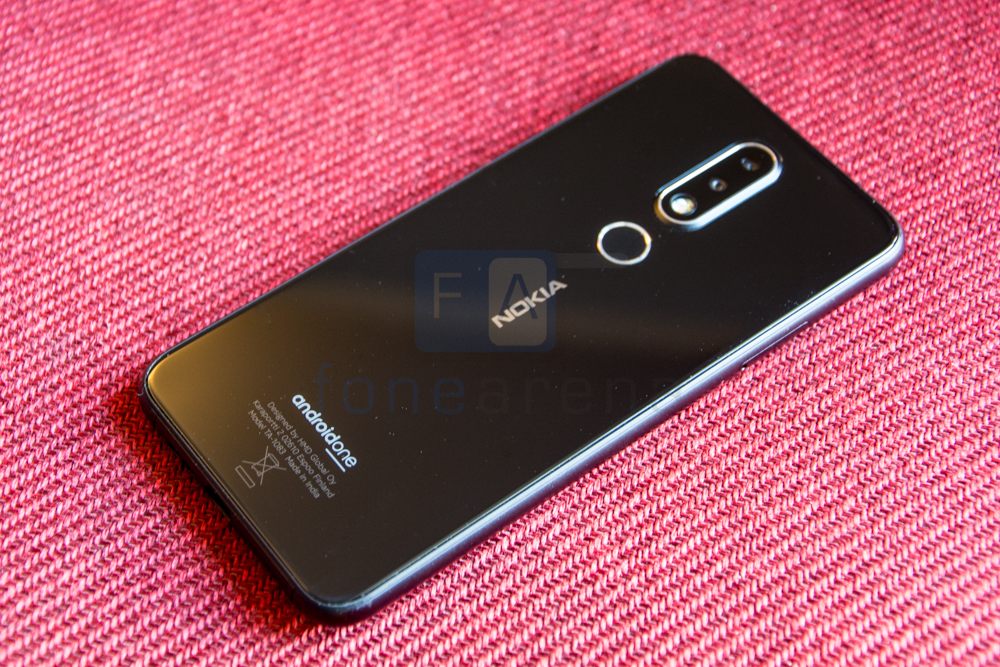 Flip over to the back and you’ll find a centrally mounted dual camera array. The array sits proud of the rear panel but there’s an ever so slight metal rim around it protecting the camera lens from scratches. Below it is the fingerprint scanner. We found the fingerprint scanner to be a bit hard to reach because of the reduced dimensions of the hardware. You’ll have to bend your finger ever so slightly to be able to reach the fingerprint reader. Smartphone design can often be a dual edged sword and we’re glad that the company opted for more comfortable overall dimensions. All in all, the Nokia 6.1 Plus is a beautifully designed phone that fits exceptionally well in the hand. The glass, at least the black version, doesn’t attract too many fingerprints and can be easily wiped clean. The rear glass was grippy enough that we never felt unsure about the phone slipping out.

On the software front, Nokia’s been touting their pure and secure build of Android since the first crop of devices were launched. That continues on the Nokia 6.1 Plus. Part of the Android One initiative, this is as clean as it gets. The only preinstalled apps are Google’s own basic suite consisting of Google Photos, Tez, Drive and more. The camera app is a bit more robust but does not include the Pro Camera interface.

The Nokia 6.1 Plus is powered by a Snapdragon 636 chipset which is the same as on the Redmi Note 5 Pro. Paired with 4GB of RAM, the internals are perfectly matched for a mid-range handset. The Snapdragon 636 chipset is known to perform well for the price bracket and thanks to the clean build of Android, that’s all the more true here. In day to day use we didn’t face any slow downs or lags at all. The Nokia 6.1 Plus performed admirably and could run pretty much anything we threw at it. GPU performance isn’t spectacular and with games like PUBG, you will have to turn down the graphics. With the graphics set to low though we got a pretty consistent frame rate. Playing PUBG for half an hour or so did warm up the phone a little bit around the camera but it wasn’t particularly uncomfortable. Overall, the phone isn’t quite a gaming beast but at this price point it is quite hard to find a phone that really excels at gaming. For regular use, the Nokia 6.1 Plus and the Snapdragon 636 chipset is more than enough. 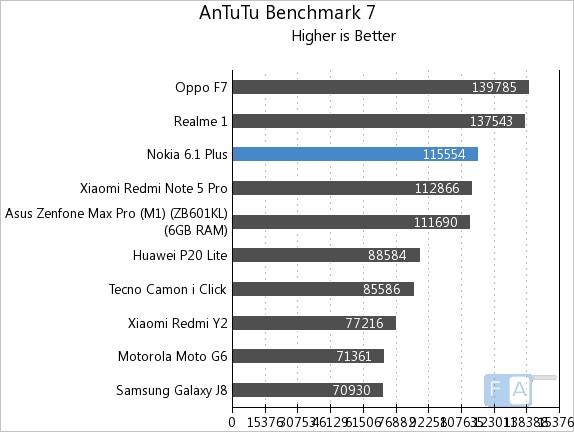 In the AnTuTu 7 Benchmark, the phone scored 115554 points which placed it just ahead of the category leader, the Redmi Note 5 Pro. 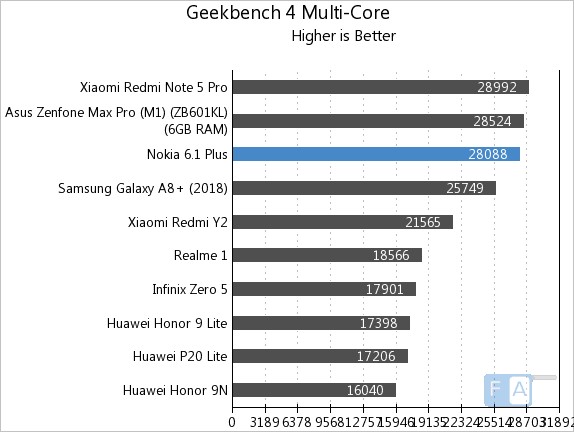 In the Geekbench 4 Multi Core benchmark, the phone scored 28088 points placing it amongst the top three. 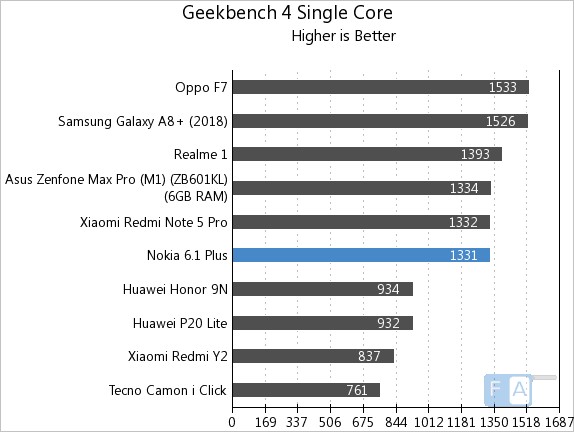 In Geekbench 4 Single Core, the Nokia 6.1 Plus scored 1331 points which placed it in the middle of our test bench.

The Nokia 6.1 Plus has a 5.8-inch Full HD+ display with a notch. Yes, there is a notch and you can disable it too. Nokia has paid attention to the little things and hiding the notch results in symmetric rounded off edges. Exactly the same as the physical curve of the screen. Since this is an IPS LCD panel, you’ll still see a slight gray area on hiding the notch. Then again, you’re not going to get an OLED screen at this price point, not yet anyway. 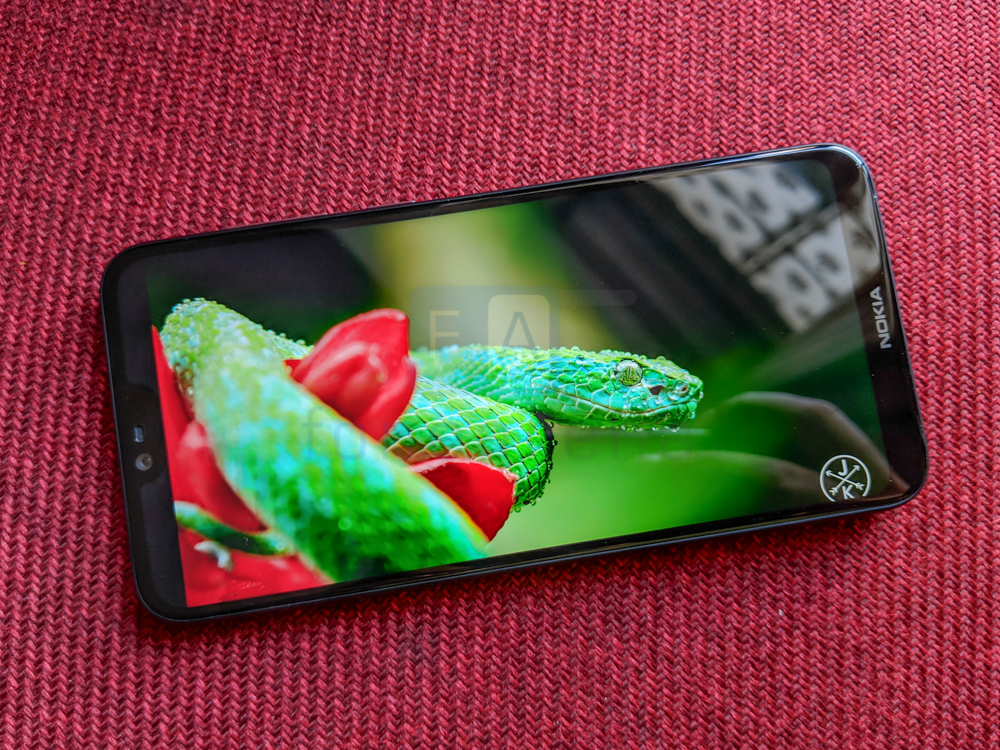 Coming back to the screen itself, the IPS panel looks great. In fact, it’s definitely better than the one on the Redmi Note 5 Pro. Viewing angles are excellent and there’s practically no color shift even at extreme angles. Brightness levels don’t reach the retina burning levels of some phones but were good enough for outdoor usage as well. On especially sunny days, the maximum brightness might not be enough to overcome the glare caused by the glossy screen.

The phone pairs a 16MP rear camera with a 5MP secondary monochrome module that is used for depth sensing. The camera combines images from both the modules to improve picture quality, especially in the bokeh mode. 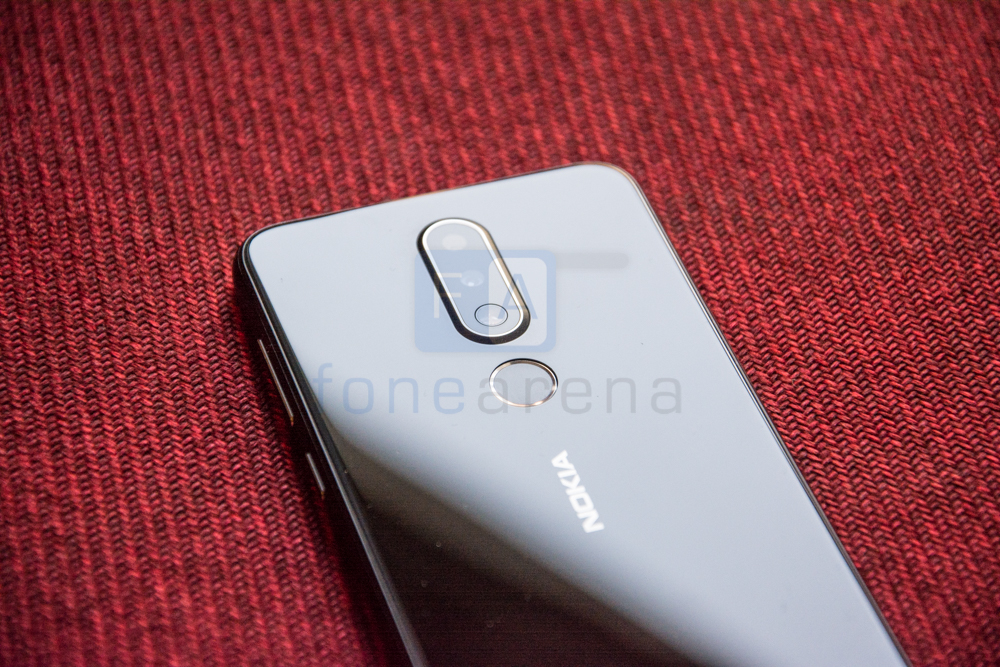 The camera on the Nokia 6.1 Plus takes rather good photos, provided you can hold your hand still. There’s no stabilization on board and taking photos in less than ideal light gave blurry results. 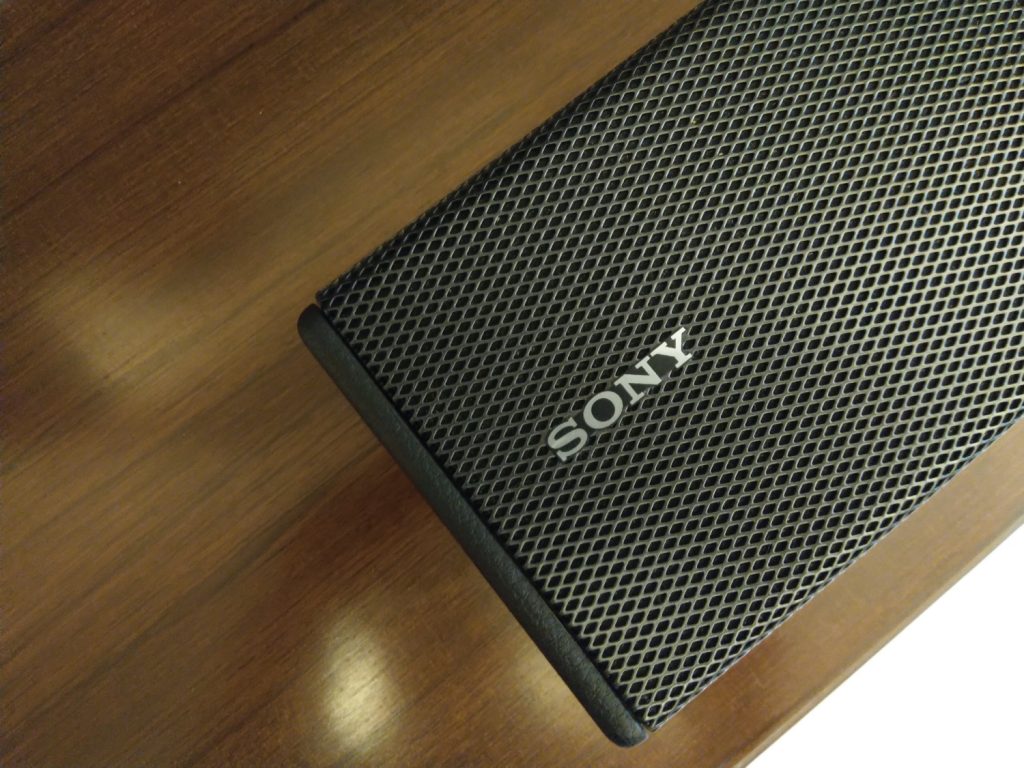 Despite being shot in a dimly lit room, the phone managed a sharp image with very limited noise. You’ll notice that it burnt out the background though indicating limited dynamic range.

In the first and second image, we can see the phone exhibiting remarkably low noise levels for indoor, low-light shots. It is rare to see a smartphone in this category that can deliver the goods in less than ideal conditions. The Nokia 6.1 Plus clearly does well at that. The image with the flower however does point out the very limited dynamic range. By focussing on the foreground, the phone has completely burnt out the highlights in the sky. The last shot which was taken moments later gives you a better idea of the color of the sky at the moment. Dynamic range aside, we had little to complain about the camera on the Nokia 6.1 Plus. On the video side of things, the phone can capture up to 4K video but there’s no stabilisation at all. You can also broadcast directly to Facebook and YouTube directly from the camera app.

Connectivity options on the phone include dual SIM card support as well as dual 4G VoLTE. There’s Wi-Fi 802.11 ac/b/g/n, Bluetooth 5.0 and of course, GPS and GLONASS too. The SIM slot is of the hybrid variant and you can use a memory card if you choose to augment the built in 64GB of storage. Approximately 52GB is available at launch.

The Nokia 6.1 Plus packs a 3000mAh battery. Now, this isn’t quite the largest battery around but paired with the frugal chipset, it gave us a full day of usage. We felt the need to top up the phone every night but unless we pushed real hard by playing PUBG or with extended YouTube & Netflix use, getting through the day wasn’t much of a challenge. It also has Qualcomm Quick Charge 3.0 fast charging.

The Nokia 6.1 Plus is a damn fine smartphone. The design & alone makes it a winner and it is hard to imagine this as a device priced at Rs. 15,999 . The stock build of Android and Nokia’s proven commitment to fast upgrades too help make a case for the phone. The specs aren’t anything special, but they’re sufficient to keep pace with the competition. A larger battery and slightly better camera is all that the phone needs to really become the hands down recommendation in its class of hardware.

It will be available exclusively from Flipkart as well as Nokia.com/phones starting from August 30th.