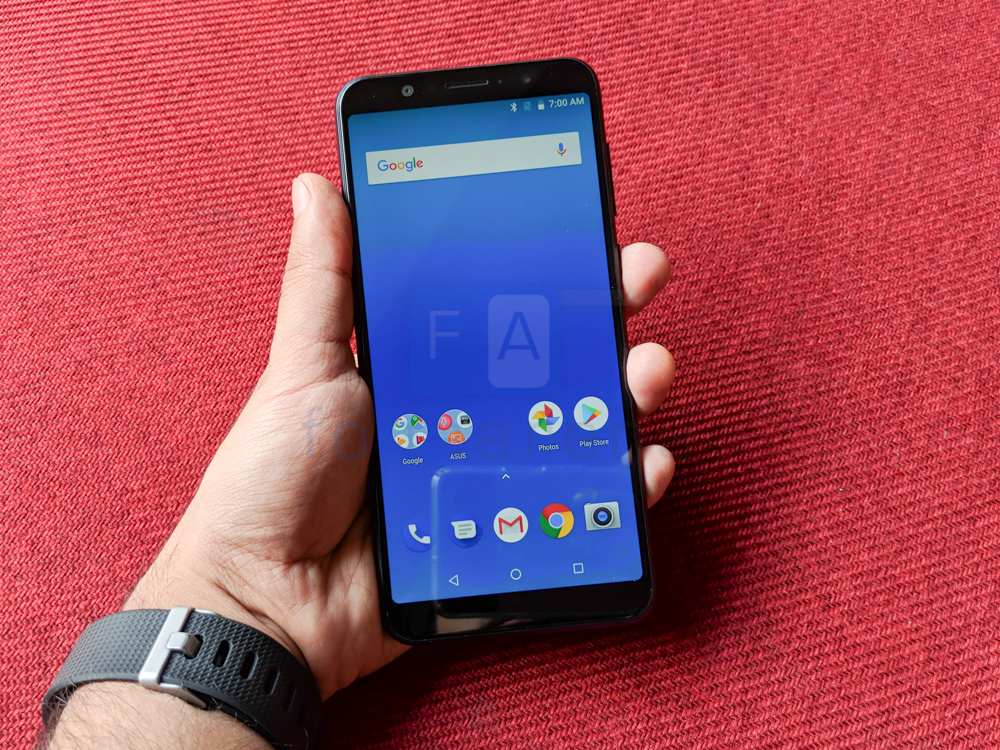 The ZenFone series of devices have had a rollercoaster-like existence in India. From the soaring success of the first generation ZenFone to the hit or miss attempt at making it a high end product, the company hasn’t shied away from experiments either. The ZenFone series became a catch all of sorts with interesting devices like the ZenFone Zoom and ZenFone AR also falling under the same branding. As it goes though, it is the value segment that rules the roost in India. Asus went back to the drawing board and has created a brand new device specifically for India and our initial impressions put it as rather impressive. Let’s dive in for a closer review of the Asus ZenFone Max Pro M1.

The Asus ZenFone Max Pro M1 was built straight up for India to target the value segment competition and as such, the design reflects this. The ZenFone Max Pro M1 is a smart looking phone that can easily hold its own against competitors like the Xiaomi Redmi Note 5. The front has an 18:9 screen which has fast become the new normal. 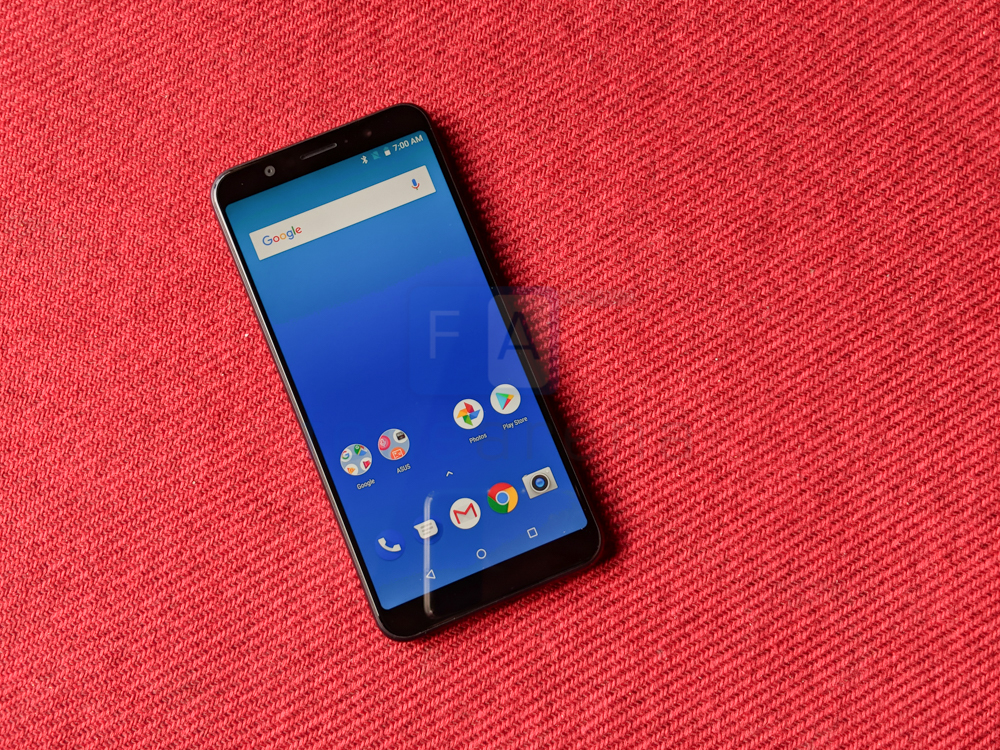 The all screen front with narrow bezels on either side and just slightly larger ones at the top and bottom go a long way in making it rather attractive to look at. There’s no word on the kind of glass used here other than Asus claiming a form of protective glass. Up top, you’ll find an 8MP camera, a selfie flash as well as the usual array of sensors. 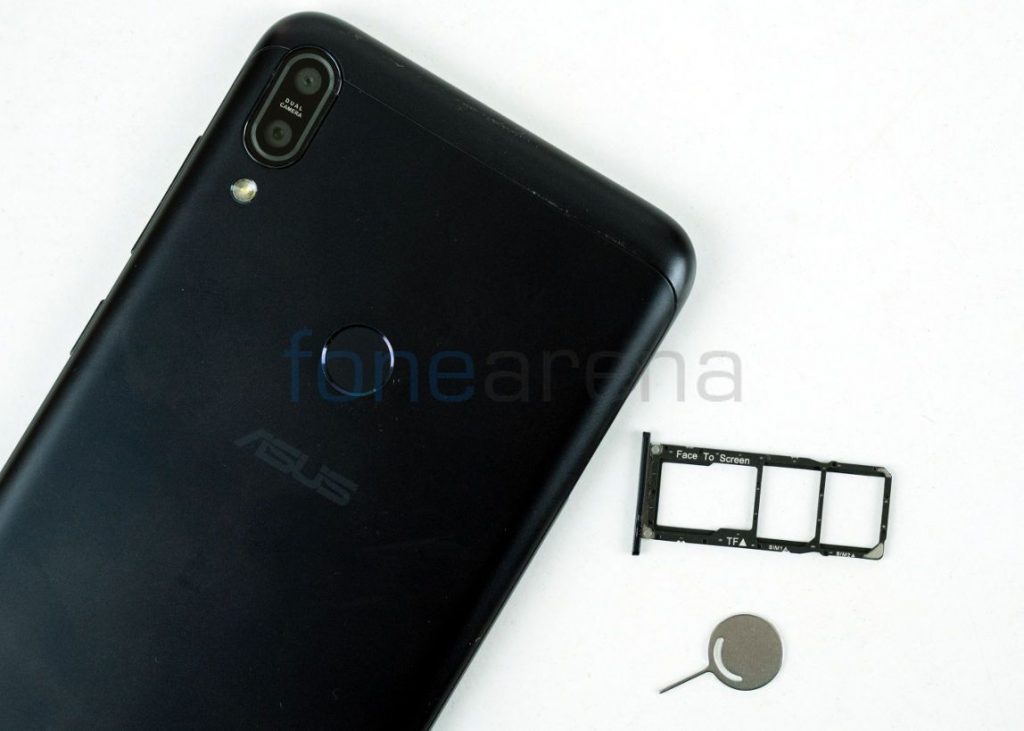 The right side of the phone sports the volume rocker and power button, both of which have excellent feedback. There’s just the right amount of give and you’ll notice that it is easy to find and press down on the keys even if you have the device in your pocket. The left has a single tray that houses two SIM card slots as well as a microSD card slot. 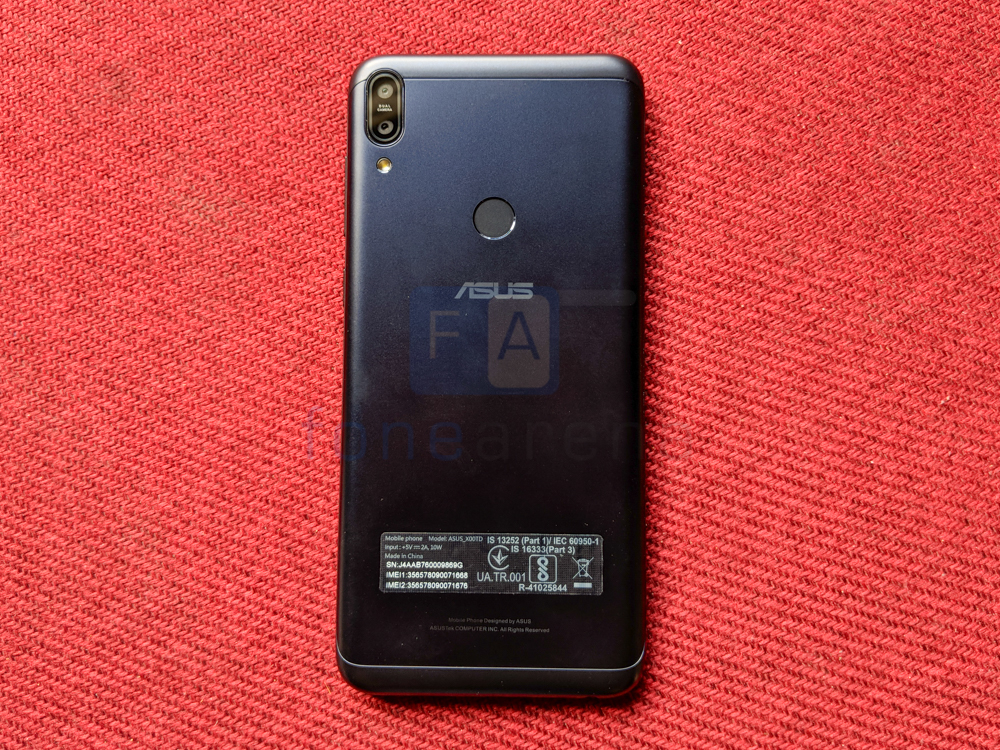 The entire shell swells up in a pillow like manner from the sides and gently curves towards the back. This feels great in the hand and despite the slightly larger dimensions, the phone sits wonderfully well in your palm. The back of the phone is made of aluminum of course with plastic end caps at the top and bottom. While the aluminum casing obviously provides structural rigidity and strength to the hardware, we found it to attract a lot of fingerprints. Up at the top left corner is a dual camera array alongside a single LED flash. Towards the middle is a fingerprint scanner. The scanner is pretty fast but is a bit small in size due to which on occasion you might have to scan twice.

Along the bottom edge of the phone is a microUSB port, quite unfortunate but understandable given the market positioning. Overall, the phone is marginally thicker and heavier than the competition. You’ve got the extra-large battery to blame for that. At 180 grams, you’ll likely feel the weight of the hardware in your pocket but there’s a certain rigidity here and it makes the phone feel extra solid.

Stock Android 8.1 is the operating system of choice here and for a whole lot of users, this is going to be a big win. This makes the ZenFone Max Pro M1 one of the very few devices to ship with stock Android in the sub Rs. 15,000 segment.  The company plans to deliver two major updates to the hardware. That said, the phone is not a part of the Android One initiative.

Despite being a stock Android device, there still is a very slight amount of bloat onboard. While some users might appreciate the presence of the Facebook, Instagram and Messenger apps, the Go2Pay payment wallet is a different story altogether. Neither of these can be removed. Other apps like the Calculator, Sound Recorder and FM Radio are core applications that don’t really count as bloat. 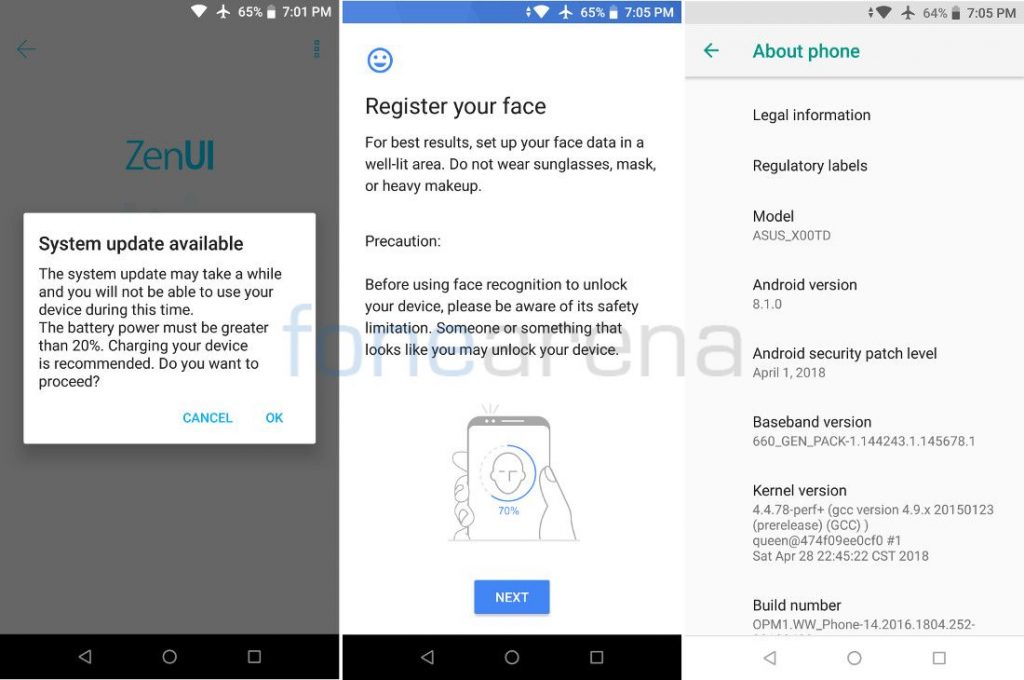 Asus recently added Face Unlock in an update, which worked most of the times without any issues. The update also brought April security patch and some improvements. Even though the company’s product manager said that the phone doesn’t have Treble support, the Treble check app says it has the support. At the launch Asus also promised to offer update to Android P in coming months, and said that it will try to update it to Android Q.

One of the biggest selling points of the ZenFone Max Pro M1 is the fast Snapdragon 636 chipset powering the show here. This is the same as on the Pro variant of the Xiaomi Redmi Note 5. Paired with 3GB of RAM, the specs are some of the best you’re going to get in this price band. Games, multitasking, all the apps you can throw at it, the phone still managed to remain rock solid. We’ve been using the phone for the last ten days or so and observed no noticeable slowdowns or lags anywhere. The phone heats up very slightly while gaming but not to a degree that would cause discomfort. We’ve put the phone through a series of benchmarks to give you a comparison against the competition. 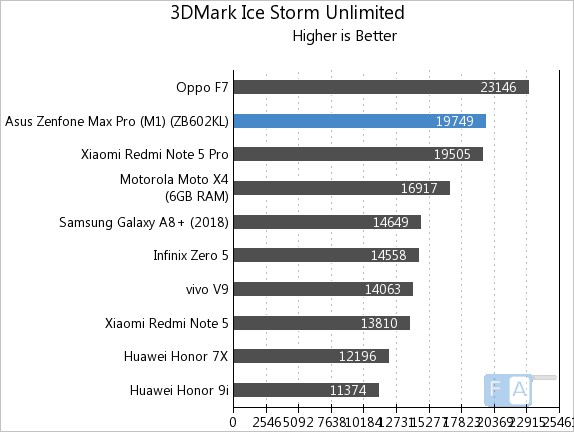 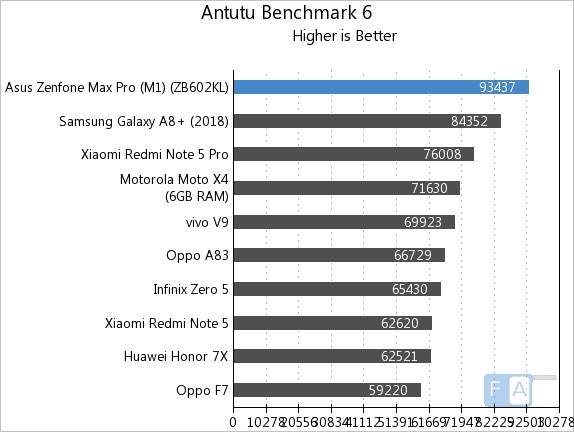 In AnTuTu 6, the phone scored 93437 points placing it at the top of our list. 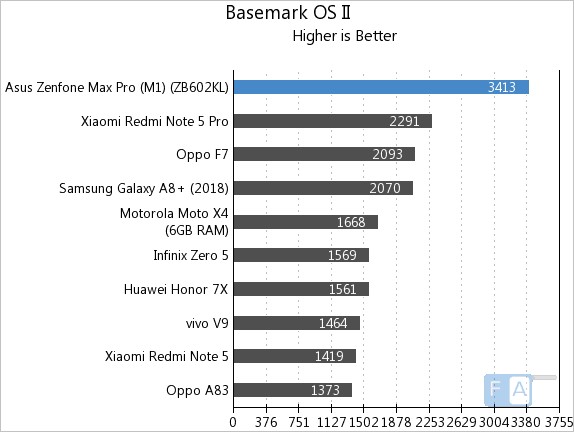 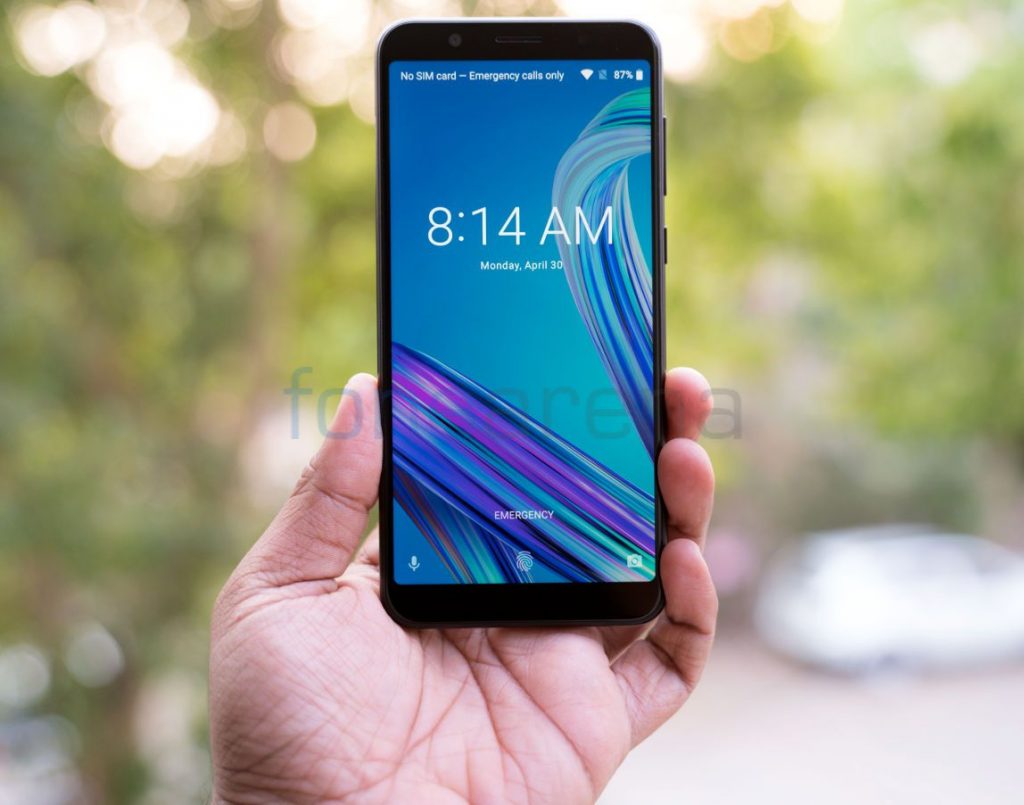 The 5.99 inch 18:9 screen is pretty comfortable to hold. The resolution on offer is FHD+ which translates to 1080 x 2160 pixels. Asus claims that the screen has a contrast ratio of 1500:1 and 450 nits of brightness. In real usage, we found the screen to be well saturated and an improvement over the one on the Redmi Note 5 / Pro. In fact the viewing angles are definitely better here and the screen is bright and vibrant, just the way that most people like it. Brightness levels are good enough for outdoor use and the screen remained visible even in the bright summer sun. Brightness levels go as high as 450 nits.

Given that the camera is usually the Achilles heel on mid-range devices, we were excited to test out the Asus ZenFone Max Pro M1. The dual camera array includes a 13MP sensor paired with a secondary 5MP camera for depth sensing. Starting off with the controls, the app has a lot of options but isn’t the most intuitive around. 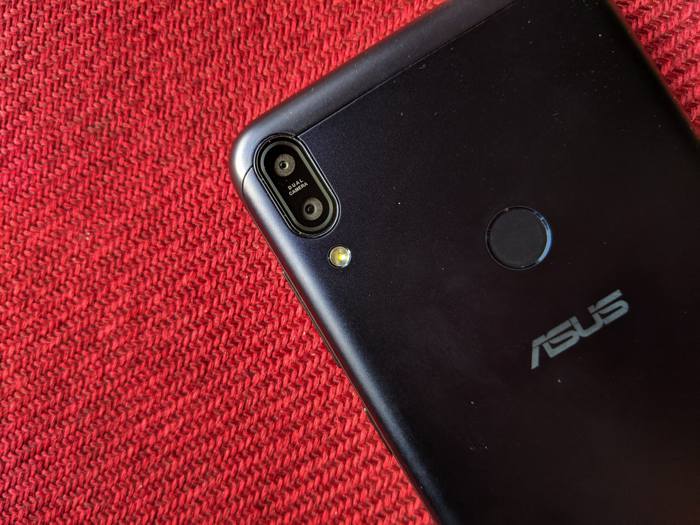 Basics like flash adjustment are hidden away under a menu instead of being a single tap. Portrait mode isn’t well labeled out either where the “Depth Mode” works as bokeh mode and Portrait mode changes exposure and metering values accordingly. For the sake of testing, we’ve kept all the options on auto mode. 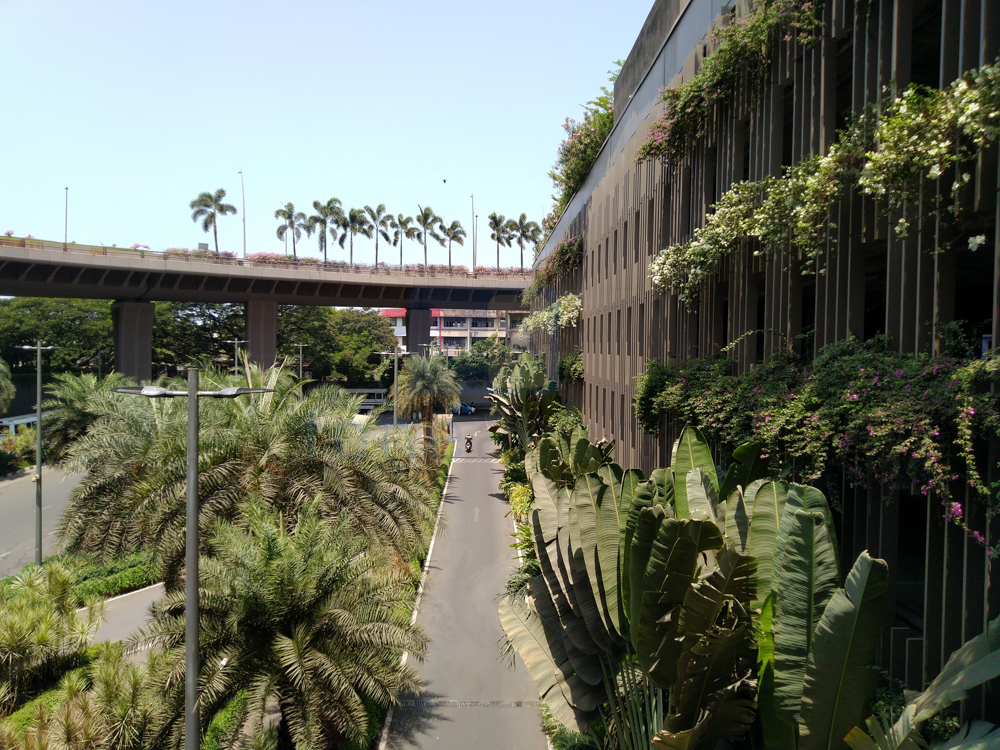 Regular day to day shots look about as good as you’d expect. We felt that the white balance was slightly off with the image having a warmer than real life look. The blues too weren’t entirely accurate.

The HDR Mode isn’t too effective and detail retrieval from dark areas isn’t that great. Additionally, shooting in HDR mode has a perceptible lag. Admittedly this is less than a second but when shooting in less than ideal light, this results in blurred shots which isn’t something we expect in the latest generation smartphones.

Without the flash activated, you’ll probably want to switch off HDR when shooting in low light scenarios because it is borderline impossible to get a stable shot. The unfortunate side effect here is that images end up rather dark with a severe loss of details in shadow regions. 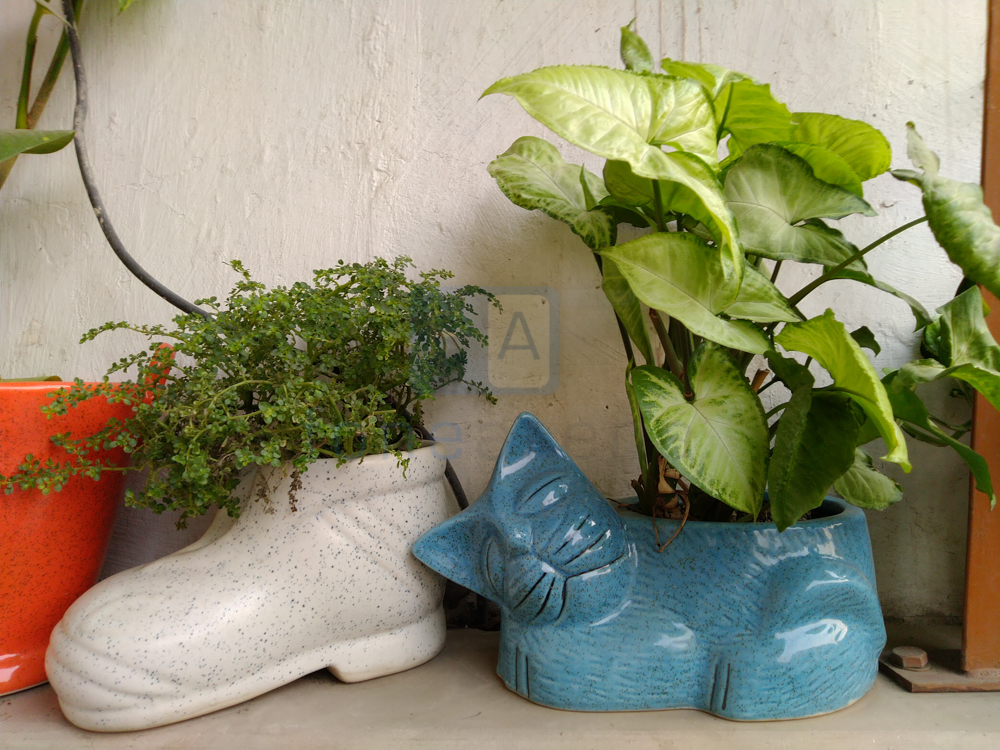 In good lighting, the phone of course manages to retain a large amount of details with well controlled noise levels. 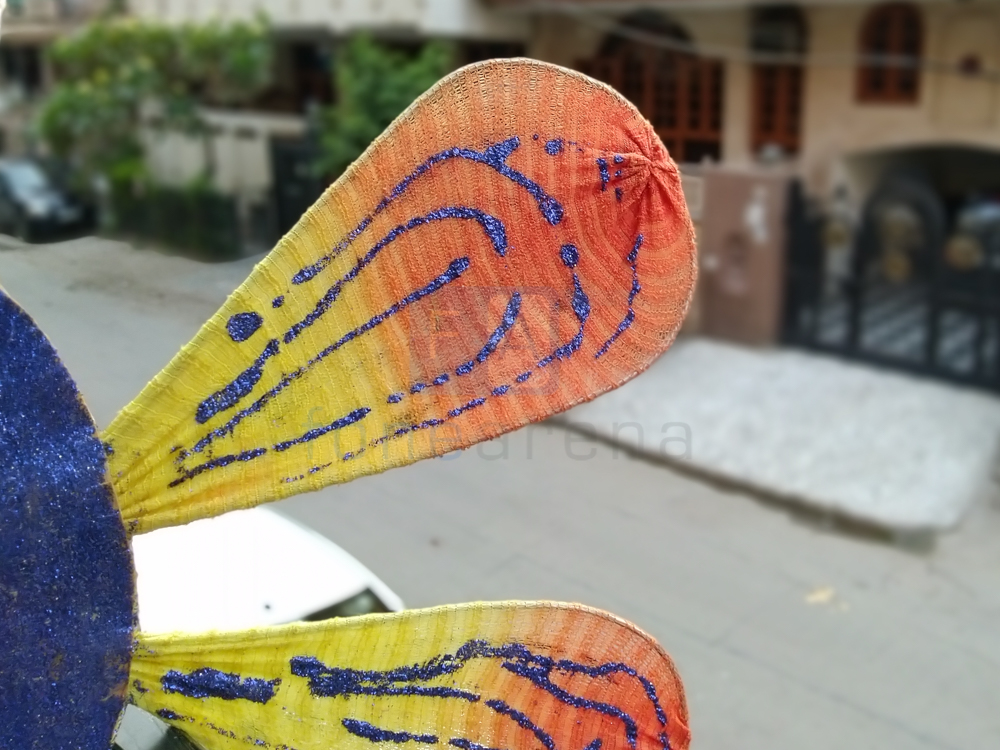 Depth Mode works better than we’d expected and the phone does a good job of edge detection. The blur effect is subtle and looks quite natural. Talking about video recording, the phone can record as high as 4K UHD but does not support stabilisation of any kind. Check out more samples here.

The Asus ZenFone Max Pro M1 supports Dual 4G VoLTE, Wi-Fi 802.11 b/g/n (2.4GHz), Bluetooth 4.2 as well as GPS + GLONASS in terms of connectivity. The phone supports AptX, AptX HD as well as LDAC for high quality wireless audio playback. The phone also has an NXP Smart Amp. If you’ve got a decent pair of earphones or headphones, expect to see a bump up in sound quality. On our end we observed that the sound profile was flat, balanced with a low noise floor. The 32GB variant we tested had about 21GB available. You can expand storage via a dedicated microSD card slot. 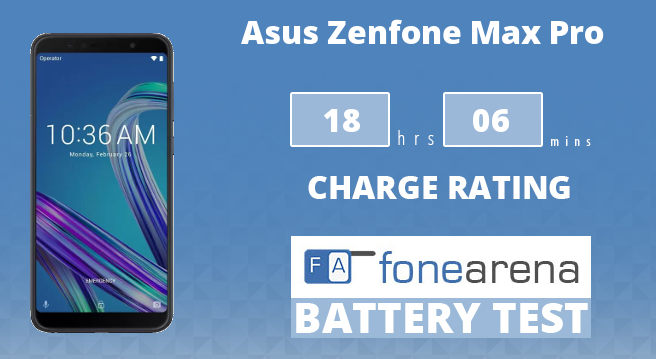 Talking about battery life, with a 5000 mAh battery built into the phone, you would expect the device to last forever. Unfortunately that wasn’t quite the case. The phone managed 18 hours and 6 minutes in our standardised test which is pretty good on its own. However, the Redmi Note 5 manages longer battery life with a 1000 mAh smaller battery due to better optimisation. We hope this is something that’ll be worked on with software updates. Generally speaking, the phone will easily last you a full day of use with enough juice left over to get you through a fair bit of the next day of use. It takes about 2 hours and 50 minutes to charge the phone from 0 to 100%

The Asus ZenFone Max Pro M1 is a very aggressively positioned device. With the device, Asus has taken practically every step possible to counter the competition. The price is lower, the specs match and exceed the best in the business and the execution is indeed very good. 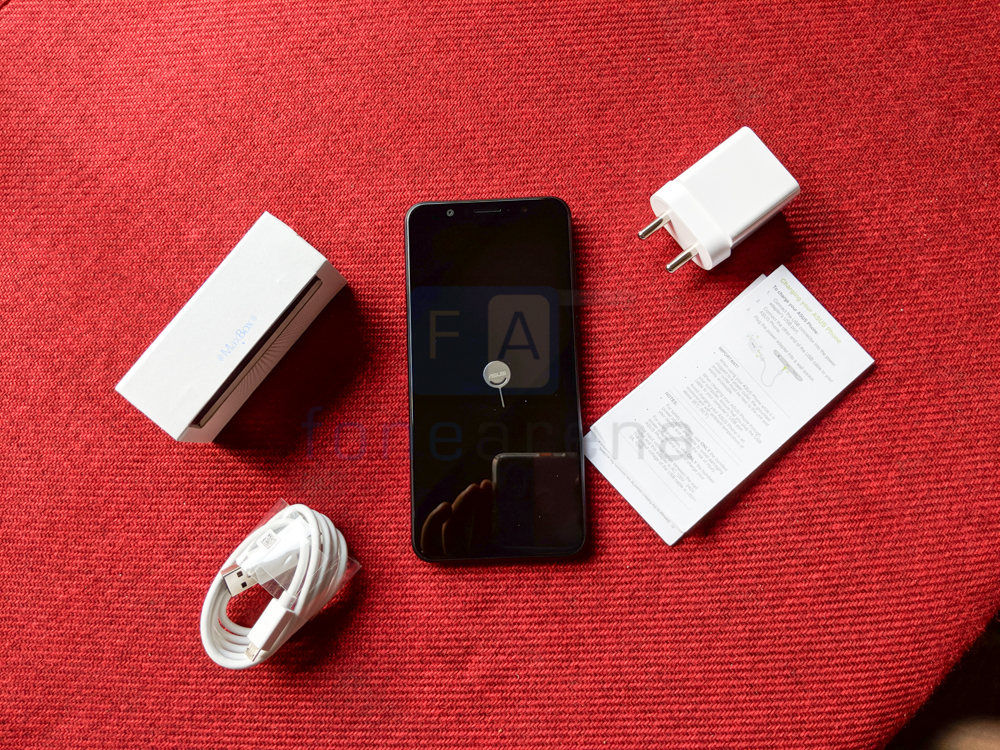 Of course, no smartphone is perfect and we feel that there is room for improvement in the camera and battery optimisation department but what you cannot deny is the sheer value on offer here. The Asus ZenFone Max Pro M1 isn’t just holding its own but is taking the fight to the competition. The Asus ZenFone Max Pro M1 is priced at Rs. 10,999 for the 3GB RAM and 32GB variant that we tested out. It goes on sale exclusively on Flipkart  every week.