The Nokia E71 was (and still is, in many person’s opinions) the king of candybar QWERTYs from Nokia & Symbian. But the E71 is now 2 years old and has been replaced by a new iteration, the Nokia E72, and surprisingly another design, the E5. From the looks of it, the E5 is to the E72 what the E63 was to the E71 (no, this isn’t an IQ test question), a cheaper version that compromises on some aspects while still trying to retain the charming points of the original. 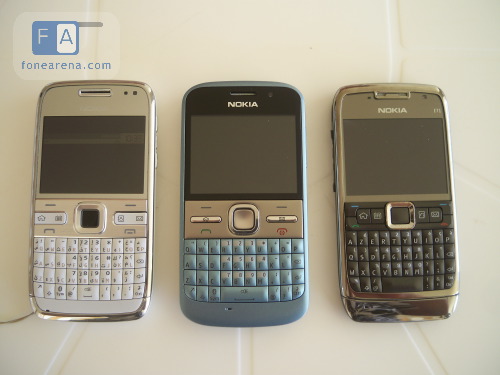 Below, is a point-by-point table comparison à-la-Steve Litchfield, between the E72 & E5, with the godfather of the two, the E71, thrown in for good measure. You can click on the image to access a slightly larger version.

As you can probably spot, the result is quite staggering. While the E5 is introduced as mid-range Eseries and the E72 is top of the line Eseries, the E5 fairs surprisingly well. Mainly, on the software side, the E5 has an improved software version which adds a Contacts Bar homescreen, Microsoft Communicator, brings back the much hyped Podcasting which was weirdly taken off the E72, adds a dedicated Facebook app that integrates with the Contacts phonebook. It also has a whopping 256MB or RAM, compared to the E72’s measly 128MB, which makes it run like an excited mouse on a happy wheel. And while it has a smaller 1200 mAh battery compared to a 1500 mAh battery on the E72, it features power optimization that helps it endure a full day of heavy usage without dropping below 3bars, from a personal experience.

The E72 still wins on a few other fronts though, mainly hardware-related with a smaller footprint, hot-swappable microSDHC with an 8GB card in the box, a better camera, an accelerometer and compass, and more shortcut buttons. On the software front, it brings encryption and a few more pre-installed apps.

As for the E71? Well it shows its age. It’s still the king in terms of build quality especially compared to the E72’s loose battery cover & space bar bugs, it comes close on many fronts, but falls short on a lot of others. Still, if you own an E71 or can’t afford the new devices, there’s not much to do to bring it to current standards, by installing a new theme, a few apps, getting a 2.5mm to 3.5mm converter, and trying hard to get good lights when taking a picture.

Here is a small gallery comparing the Nokia E5, E71 and E72. You’ll notice the E5’s massive volume compared to the other two, and the lack of a memory card door on the E5’s outside (it’s hidden under the battery). And here is a more extensive comparison gallery between the Nokia E5 and E71. Personally, I believe that if you own an E71 and want to switch to a newer device, both the E72 & E5 hold their spots as contenders. If you’re a massive multitasker, the E5 should win it thanks to its oodles of free RAM, cheaper price, and social aspect. If you don’t care about those, but need a hot-swappable memory card, a better camera, and want to try out some accelerometer-based games/apps or virtual reality location apps like Wikitude, then the E72 is your best bet. On the other hand, if you do currently own an E72, apart from the RAM issue, I don’t see any reason you might want to change to an E5.

Note: in this post, we mention that the E5 does NOT offer data encryption. It does, but the Encryption icon is hidden in the menus to the point where even we didn’t find it at first.But that’s me. What do you think of these three handsets, in light of each other? Do you still believe the E71 is the king of the Eseries? Or are the E72 or E5 capable of dethroning the king?