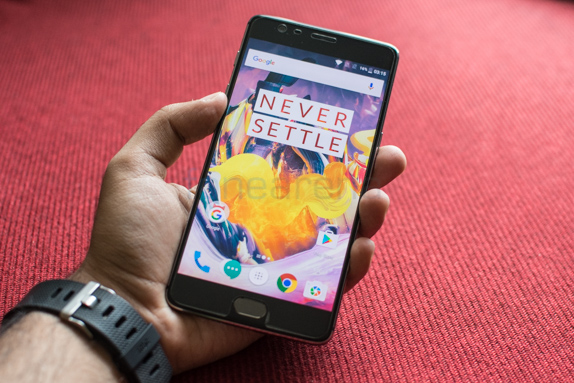 Alongside Xiaomi, if there’s one other smartphone startup that has really caught the public eye, it has to be OnePlus. Spearheaded by the young and affable Carl Pei, the company has delivered a series of mostly hit products that aim to deliver on their promise of never having to settle. Sure, it isn’t the hardest thing in the world to create a top notch product but to do this with a certain degree of refinement and more importantly, at half the the price of the competition, takes a lot more effort. Merely months after the launch of the OnePlus 3, the company has introduced it’s next device. A somewhat iterative update on the OnePlus 3, the OnePlus 3T kicks things up a notch. Here’s what we thought about it.

The design of the OnePlus 3T is nigh identical to the regular OnePlus 3. Crafted out of space grade aluminium, the phone feels fantastic to the touch. Amidst a sea of me-too designs, the OnePlus 3T like the 3, manages to look unique and rather good at that. The phone measures 152.7×74.7×7.35 mm which makes it handy enough while still packing enough depth to not feel delicate. The fact that the company managed to slip in a larger battery within the same frame size is rather impressive but we’ll talk about that later down in the review. 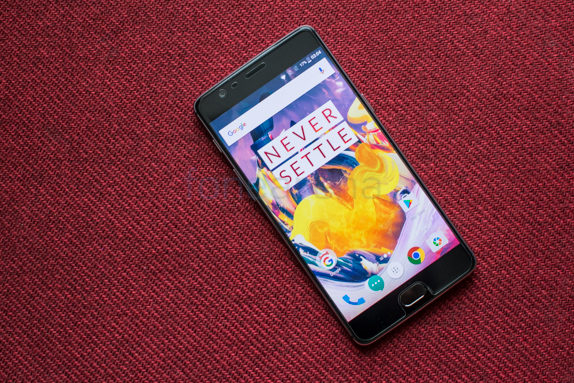 Up front is a 5.5 inch Full HD Optic AMOLED display which blends in well with the surrounding bezels. On the gunmetal variant of the phone which has a black front fascia, the entire face appears like a black slab when the screen is switched off. It might not be the most beautiful device around but you can hardly call it ugly. 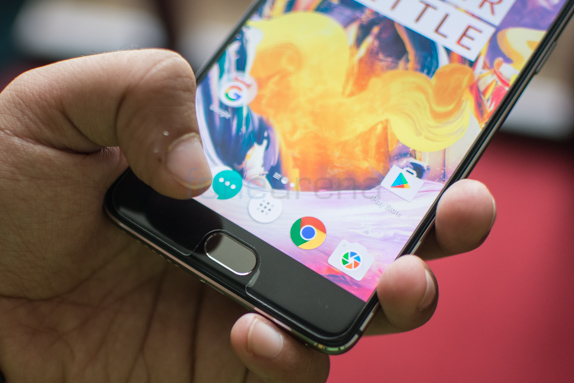 Below the screen lies a capacitive button that doubles up as a fingerprint reader. The fingerprint reader is always on so you can simply tap on it to activate your phone. Since this is not a physical button, there’s not much of a physical feedback. That said, a gentle vibration hints to a button press and it works well though nowhere close to the astonishing feedback obtained via the Taptic Engine on Apple’s iPhones. On either side are capacitive keys that remain completely hidden away till you reach out to them. Oxygen OS in it’s infinite customisability allows you to switch these off in lieu of on-screen controls or even switch functionality depending on your preference.

The right hand side is where you’ll observe the power button. Built out of the same machined aluminum, the button offers good feedback and is within easy reach. The dual SIM card slots can also be found here. The phone takes two nano SIM cards and no, these are not hybrid SIM slots. Over on the left lies the volume rocker as well as a very unique feature. Called the Alert Slider, it let’s you toggle between ringing profiles. As is expected with the Android build, you can customise this to a degree. The bottom is where you’ll find a USB Type C connector alongside a 3.5mm audio jack. The speaker grille for the single speaker is also placed along the bottom edge. 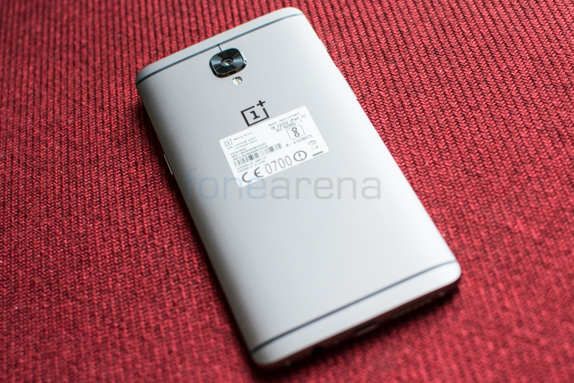 Finally, moving over to the back we observe that while the design is practically the same, there are some enhancements. Antenna lines run at the top and bottom with a prominent camera bump up top. This time around though, the camera has a sapphire crystal layer on top to prevent scratches. 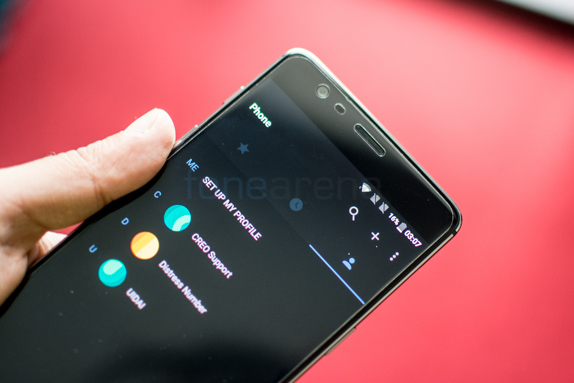 All in all, the OnePlus 3T continues the design tradition started by the OnePlus 3. The changes are limited but that’s fine given the mid cycle upgrade, the all metal build still feels solid and fantastic. With a weight of 158 grams, the phone doesn’t feel heavy especially for the size and will not weigh down in your hand or pocket.

It’s been a while since OnePlus ditched CyanogenMod for Oxygen OS. Based on Android 6.0.1, the phone is running Oxygen OS version 3.5.3. There’s a reason why the OnePlus series of phones are so popular. Yes, value for money hardware is one of them but the software too plays a big role. For the avid ROM tweaker, the OnePlus phones offer a veritable playground. Oxygen OS brings with it a whole host of functionality and customisation options while still giving users a vanilla Android interface. The software looks more or less like stock Android, adds a number of features and remains one of the fastest ROMS around; what’s not to like?

The first thing you’ll notice every time you switch on the device is the lockscreen. A time widget sits up at the top while you can view notifications below. Shortcuts sit along the bottom edge that allow you to activate the Google Now voice assistant or dive straight into the camera. Touch the always-on fingerprint reader and you’ll head on to the homescreen which is a regular grid of apps and widgets. Placed to the absolute leftmost screen panel is a feature called the shelf. The Shelf allows you to place widgets in addition to certain other custom shortcuts and is quite nifty though a bit drab in terms of visual appeal. A Memo widget placed here lets you store important tidbits of information. Other widgets include recent apps, recent contacts and the ability to spot vitals like available data, storage and battery at one glance. 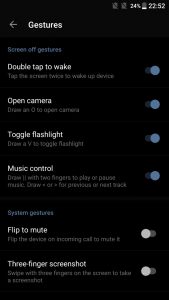 In terms of customisation, the phone offers a lot for the discerning user. This starts with the screen and gyroscope based gestures. If switched on, you can double tap the screen to turn on the display. You can also draw an O or a V to jump into the camera or toggle flashlight directly. Moving one step further, you can also draw music playback gestures to perform functions that correspond to those gestures. Of course, the phone also supports the usual screen flip gestures too.

As we mentioned earlier, you can adjust the functionality of the side mounted slider. Additionally, you can switch the functionality of the capacitive keys or switch them off altogether in lieu of on-screen controls. Visually, you get a dark mode theme built in which should boost up your battery life further. It is also possible to change fonts, icon sizes and install icon packs.

The OnePlus 3 was a very fast phone. The OnePlus 3T is faster still. We could draw a line on the performance section of our review here and call it a day but let’s go ahead and take a deeper look. The phone is powered by a 2.35GHz Quad-Core Snapdragon 821 64-bit processor with Adreno 530 GPU. This is paired with 6GB of LPDDR4 RAM. The device is clocked higher compared to the OnePlus 3 and this shows up in real usage. No, the difference isn’t huge but is certainly noticeable once you spend enough time with the phone. On that note, spend enough time with the phone and you’ll start finding most other devices nigh unusable. The OnePlus 3T is a blazing fast phone with excellent performance and no lags, slowdowns or glitches. That the phone doesn’t heat up much while crunching through intensive apps is creditable. We’ve included a range of benchmarks below that showcase the comparative performance of the hardware and also displays how the phone manages to beat the regular OnePlus 3. 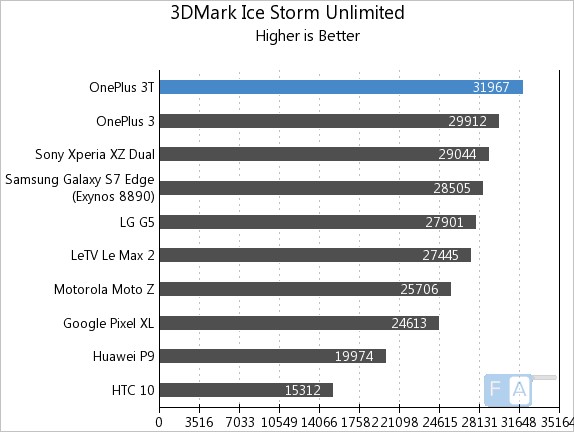 In the 3DMark Ice Storm Unlimited benchmark, the phone scores 31967 points compared to 29912 on the regular OnePlus 3. 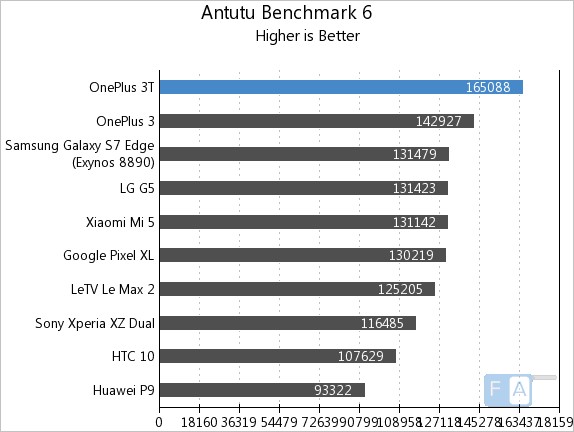 On AnTuTu, the OnePlus 3T scored 165088 which is well ahead of most phones on the benchmark list. 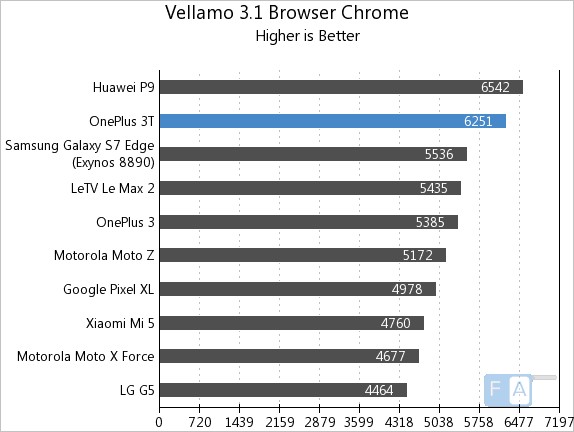 Coming to Vellamo 3.1, in the browser benchmark the phone scores 6251 points which is a bit behind the Huawei P9. 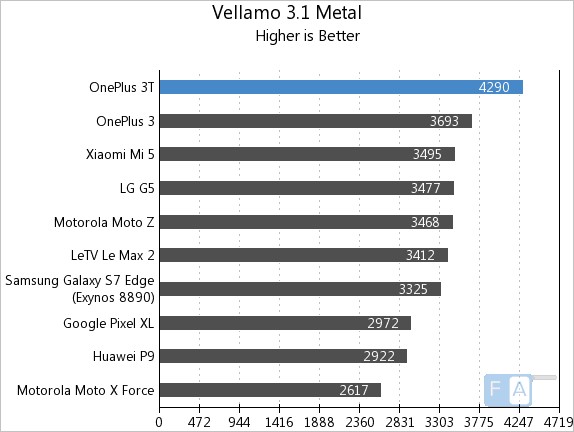 In the Vellamo 3.1 Metal benchmark, the OnePlus 3T scores 4290 points.

The Optic AMOLED display on the OnePlus 3T packs a 1080p resolution. Spread across 5.5 inches, this results in a pixel density of 401 ppi. There’s an argument to be made about how the lack of a Quad HD panel puts the device behind the competition but for all practical purposes, the resolution is good enough for all. The lower resolution means that the OnePlus 3T isn’t the most ideal device for VR gaming but then again, VR on Android is far from going mainstream. 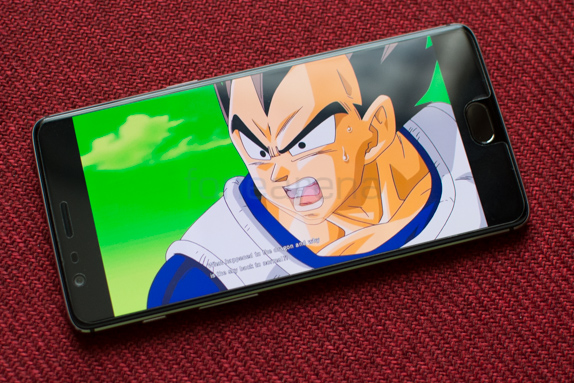 Next up, let’s talk about sunlight visibility. The brightness levels go well beyond 430 nits which proves more than sufficient. Outdoors, even in bright sunlight, the phone continues to be visible. The viewing angles too are fantastic given the AMOLED display technology used. To get around the oversaturated colors associated with AMOLED hardware, the OnePlus 3T integrates an sRGB mode which delivers highly accurate, neutral colors. However if you prefer your display to be a bit more high on contrast, there’s a built-in software option to manipulate the color rendition.

Moving on to the camera department, we find the OnePlus 3T to be competitive but not quite the best. In fact, this is the first area where we observe the result of building a device to a cost. First up, the hardware specs. The rear camera module has a 16-megapixel Sony IMX298 sensor with LED flash. You’ll also find OIS onboard and the phone can shoot 4K video at 30FPS. While the rear sensor remains the same as on the OnePlus 3, the front module gets an upgrade to a 16MP Samsung 3P8SP sensor. While the interface may seem simplistic, the camera app on the OnePlus 3T is full featured and advanced settings are all hidden away under the settings menu. 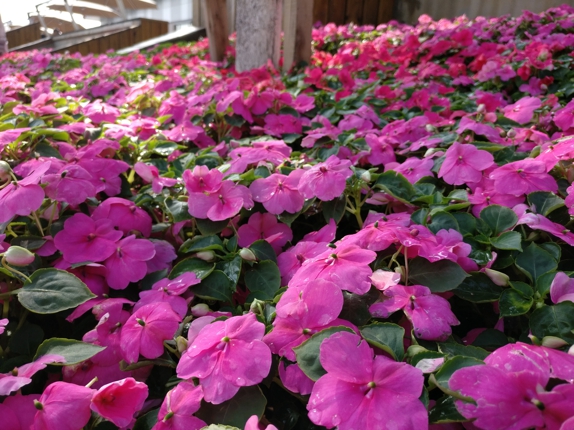 Coming to the actual image quality, the camera continues to impress especially for the price. While the hardware hasn’t changed, it appears that there IS a difference in how the software processing functions. Noise reduction has been reduced to a degree but the level of detail captured in the shots has gone up.

Dynamic range isn’t quite the best as you tend to lose details in the shadow regions, similarly the highlights tend to blow out a bit. Still, the camera is pretty awesome by all measures and only lags behind handsets like the Google Pixel and the iPhone 7 which are priced much higher.

Connectivity & Battery Life
Connectivity options on the phone includes 4G LTE with VoLTE, WiFi 802.11ac dual-band (MIMO), Bluetooth 4.2, GPS + GLONASS as well as NFC. The phone interfaces over USB Type C but unfortunately data transfer speeds are restricted to USB 2.0. The phone supports dual Nano SIM card slots but unfortunately there’s no support for microSD cards. This time around, the phone ships in a 128GB variant as well which should make things much more tolerable for heavy media consumers and producers.
Talking about the battery performance, there’s a 3400 mAh unit onboard. This represents a solid bump up from the battery on the OnePlus 3 and is particularly impressive given the lack of change in dimensions. Battery life is absolutely fantastic and you can easily get well over a full day of use. In the off chance, you do manage to deplete your battery, the phone supports the proprietary Dash charge technology too. Dash charge enables you to reliably charge your phone by 60% within 30 minutes. Not only does this work surprisingly well in real life, it does this without heating up the phone. Frankly, the Dash charge technology is really impressive and represents the kind of innovation we don’t expect to see from a price conscious startup.
Conclusion
The OnePlus 3T is one of those few devices where a mid-cycle refresh did make sense. For a little more money, OnePlus is now delivering a handset that is even better. With fantastic performance, incredibly smooth and stock like Android build, excellent hardware, you’ll find little to complain about here. 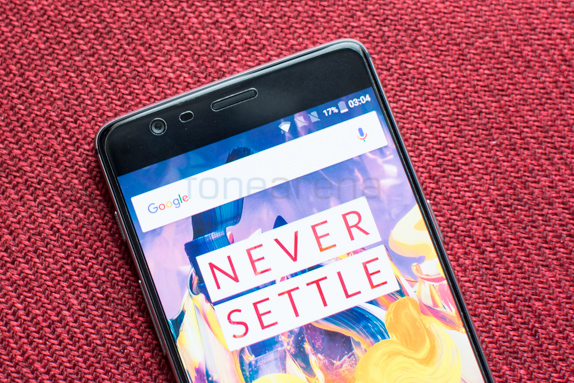 For it’s price, the OnePlus 3T is arguably one of the best devices out there. That said, you’ll struggle to find a more well rounded smartphone at any price point. The OnePlus 3T is priced at Rs. 29,999 for the 64GB version and Rs. 34,999 for the 128GB variant.