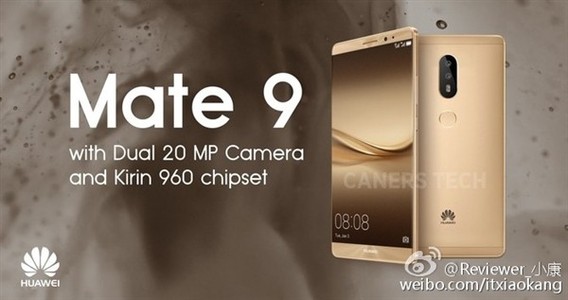 Huawei seems to be taking its dual camera game very seriously and that can be seen in the Mate 9 teaser image that has just been leaked.

The Mate 8 was one of the most powerful and best all round performers from last year but it wasn’t as widely available as many would have liked. It wasn’t launched in India either.

The teaser image showcases a design which is quite similar to the predecessor up front but with even smaller bezels which seems hard to believe considering that the Mate 8 had a class leading screen to body ratio of 78% with its 6 inch display in a body that has a smaller footprint than most smartphones with a 5.7 inch or even 5.5 inch displays.

This time around too, the display should be 6 inches in terms of size but we aren’t sure whether Huawei has gone for a 1440p display time time around. The design looks identical at the back too except for the camera unit which has now been changed to a dual 20 Megapixel unit with dual-tone LED flash.

The fingerprint scanner has also been moved a bit lower to make space for the new camera unit. Aside from that, the teaser also reveals that the smartphone will be powered by an all new Kirin 960 chipset which should be one of the most powerful processors on the market judging by what the Mate 8 offered last year with the Kirin 955.

Although the Mate 8 camera with a microUSB port, we could expect to see a Type-C port on the Mate 9 since most of their recent phones have changed to the new standard. Additionally, we could expect a battery capacity of 4000 mAh or higher as well.