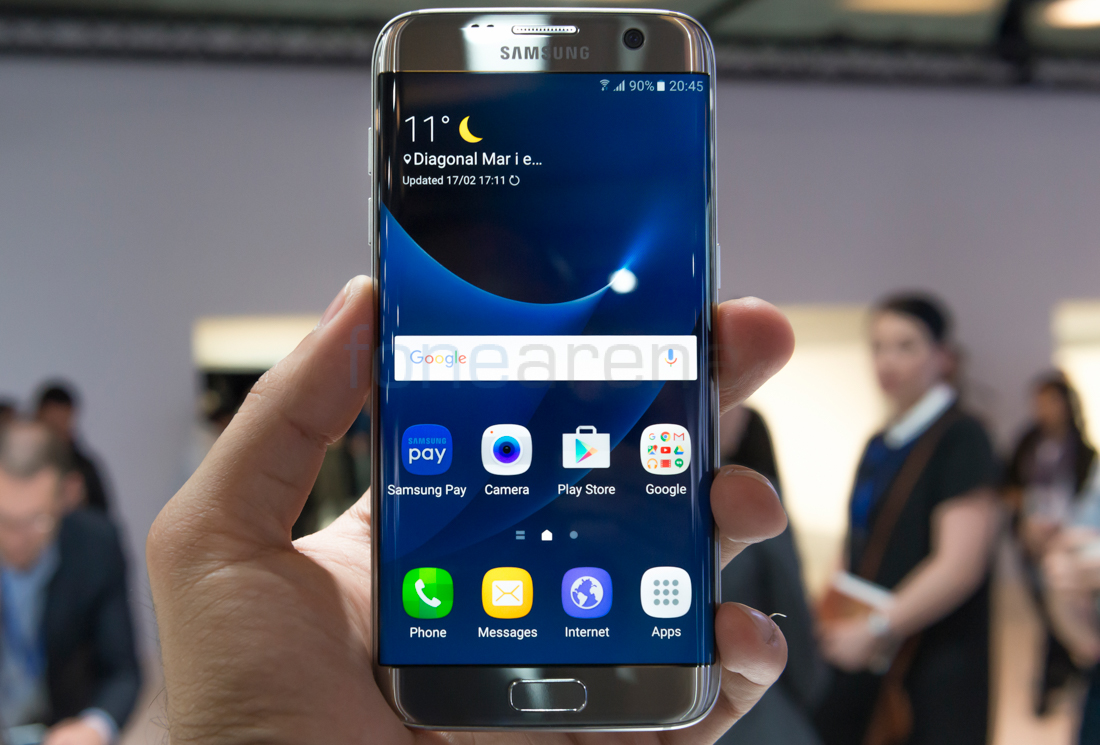 Samsung alongside flagship Galaxy S7 announcement at Unpacked 2016 event in Barcelona unveiled the curved edge variant and the successor of Galaxy S6 edge dubbed the Galaxy S7 edge. Check our first impressions of the Samsung Galaxy S7 edge, and a closer look in images and hands on video.

The Galaxy S7 edge (Left) has a dual curved 5.5-inch Quad-HD (1440 x 2560 pixels) Super AMOLED display which is bigger than the predecessor Galaxy S6 Edge with 5.1-inch screen and smaller than 5.7-inch S6 Edge+ (Right). Other than that it is same always-on 3D glass display as the Galaxy S7. 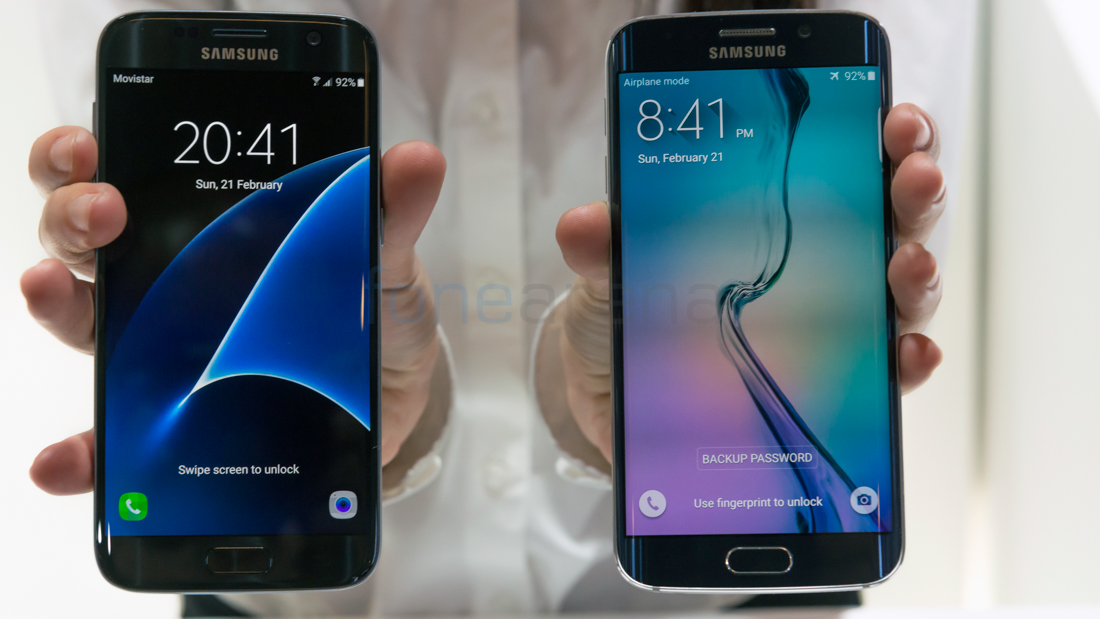 Samsung says that the Edge UX is now even more functional with more personalisation abilities. It adds a new Tasks edge for additional shortcuts for important tasks, as well as tools like a ruler, compass and flashlight. 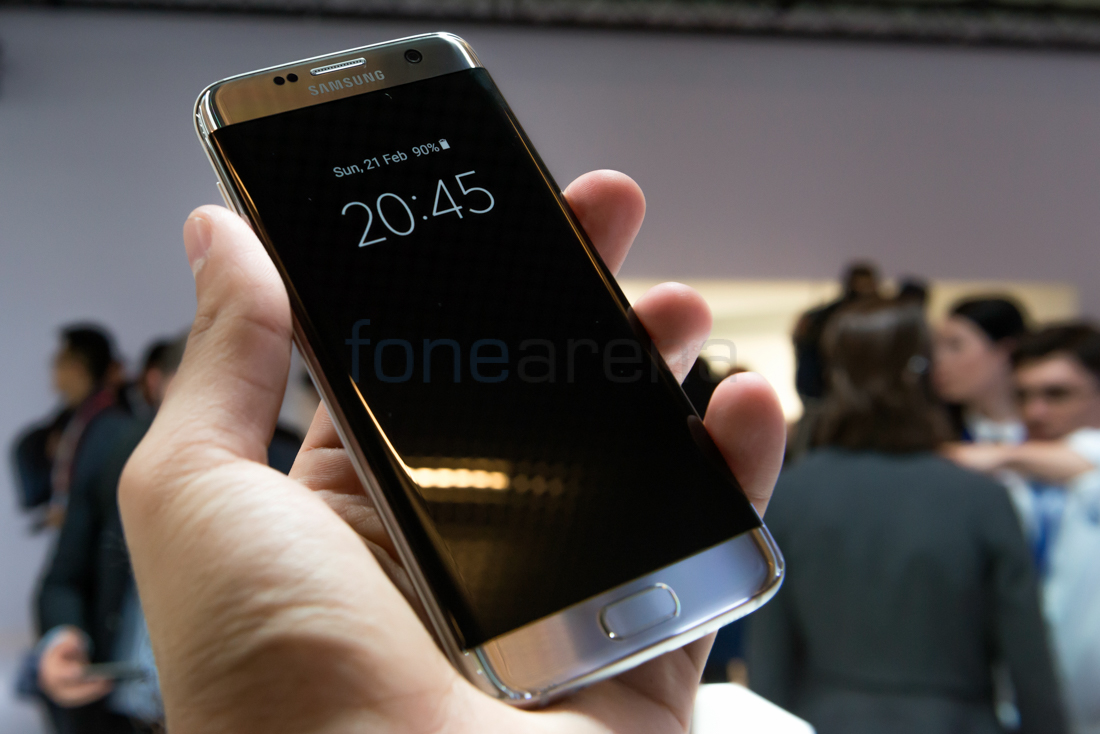 Internally, the S7 edge will have similar processors as the S7. Samsung will either ship it with a Quad-Core Snapdragon 820 SoC or Its own Exynos 8 Octa 8890 (2.3GHz Quad + 1.6GHz Quad) powered variant coupled with 4GB LPDDR4 RAM, depending upon the market. 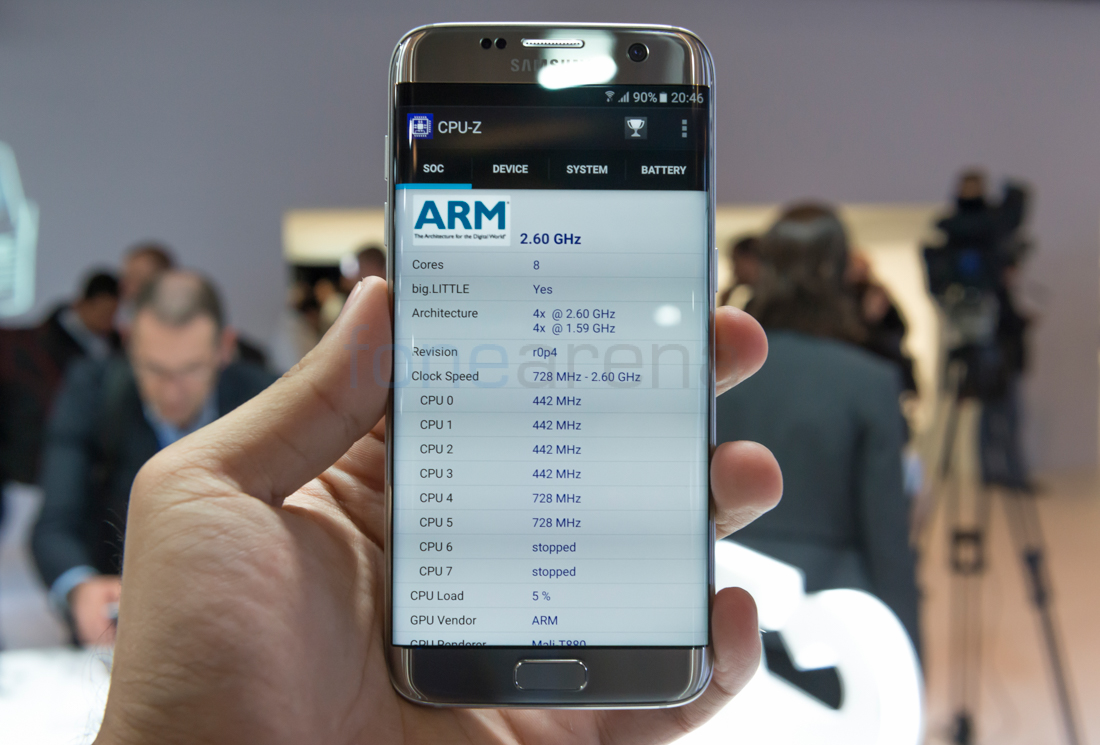 The S7 edge also comes in 32GB and 64GB internal storage variants, which can be further expanded via microSD card (up to 200GB). It runs Android 6.0 (Marshmallow) with custom Touch Wiz UI skinned on top.

The Samsung Galaxy S7 edge and the Galaxy S7 has same cameras – a front 5-megapixel selfie camera and a 12-megapixel (f/1.7 aperture) primary rear camera with Dual Pixel sensor. According to Samsung, there are a lot of improvements in the rear camera and it can reproduce brighter and sharper images than the iPhone 6S Plus with better autofocus performance. We haven’t had a chance to check the claims made by the company, so until we bring you full review, you can check more details here. 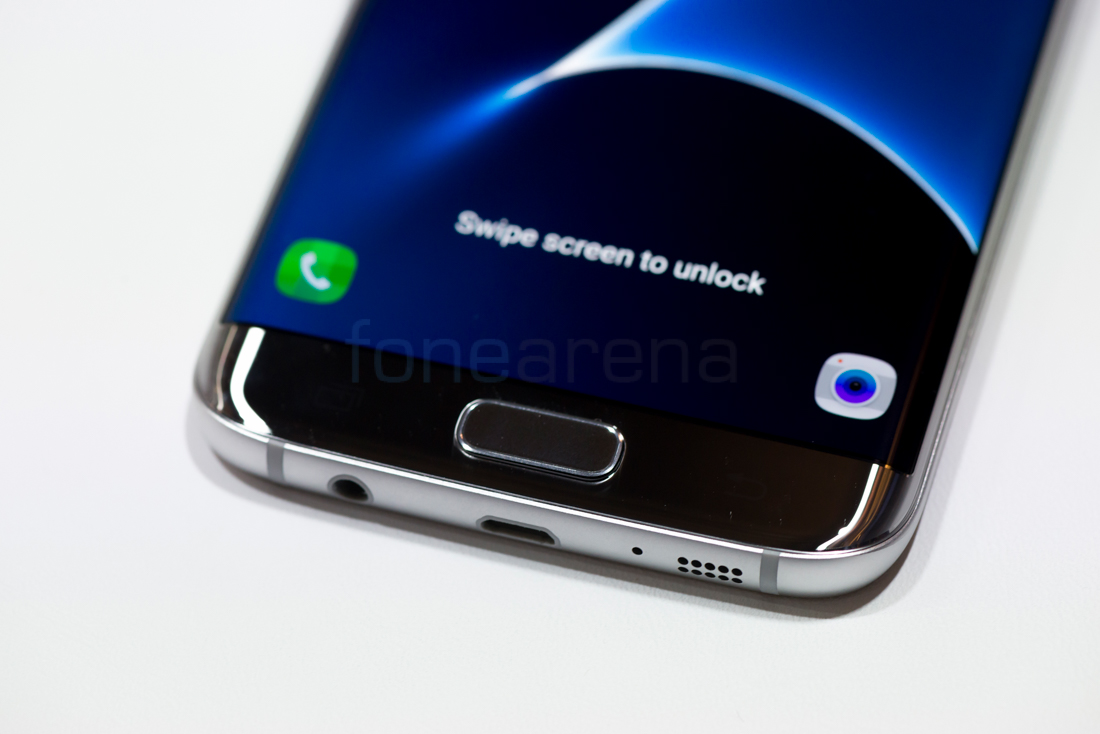 Other aesthetics are same as S7, such as the fingerprint scanner is on the physical home button sandwiched between backlit capacitive-touch Recent and Back keys below the display. The top edge of the handset has SIM card / microSD tray along with secondary noise cancellation mic. The bottom edges mounts 3.5mm audio jack, Micro-USB charging / data port, primary mic and the speaker grill. The left side has volume rocker and right has power /lock key.

The back sports a curved glass which provides a better grip, but it is fingerprint magnet at the same time. The handset measures 150.9 x 72.6 x 7.7mm and weighs 157 grams. It is water and dust resistant with IP68 ratings. 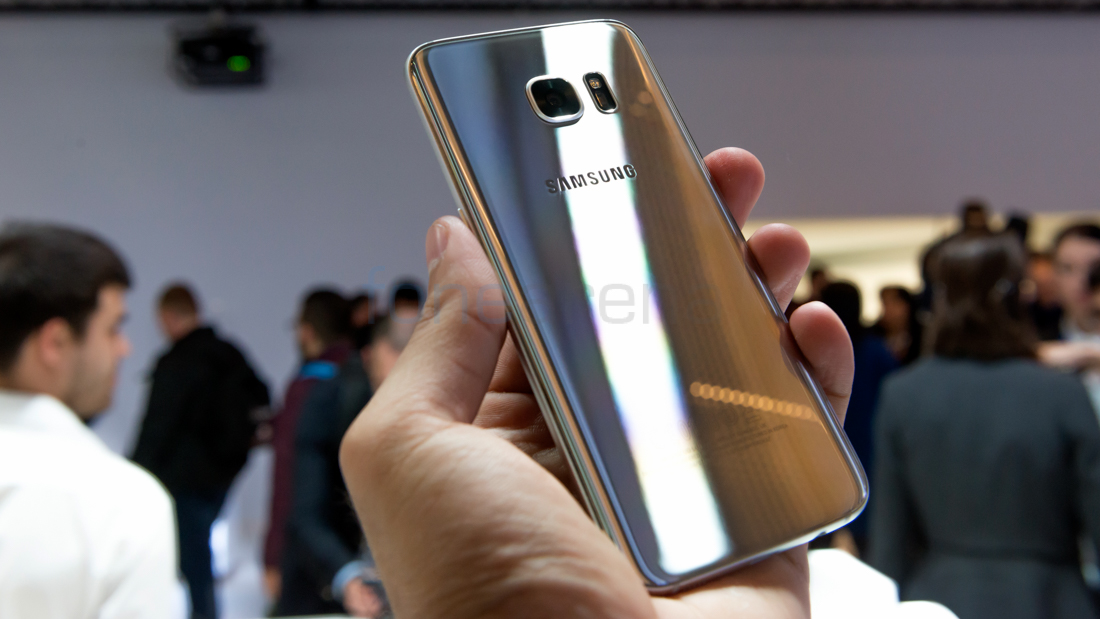 The Galaxy S7 edge is a now a hybrid dual-SIM (nano + nano / microSD) device, which was not the case with predecessor, although the battery is still non-removable. The S7 edge packs a bigger 3600mAh battery than the S7. The handset also supports fast charging for both charging type – wired Micro-USB 2.0 and wireless (WPC and PMA) charging. Other connectivity options include 4G LTE, Wi-Fi 802.11ac, Bluetooth 4.2 LE, GPS with GLONASS, and NFC. 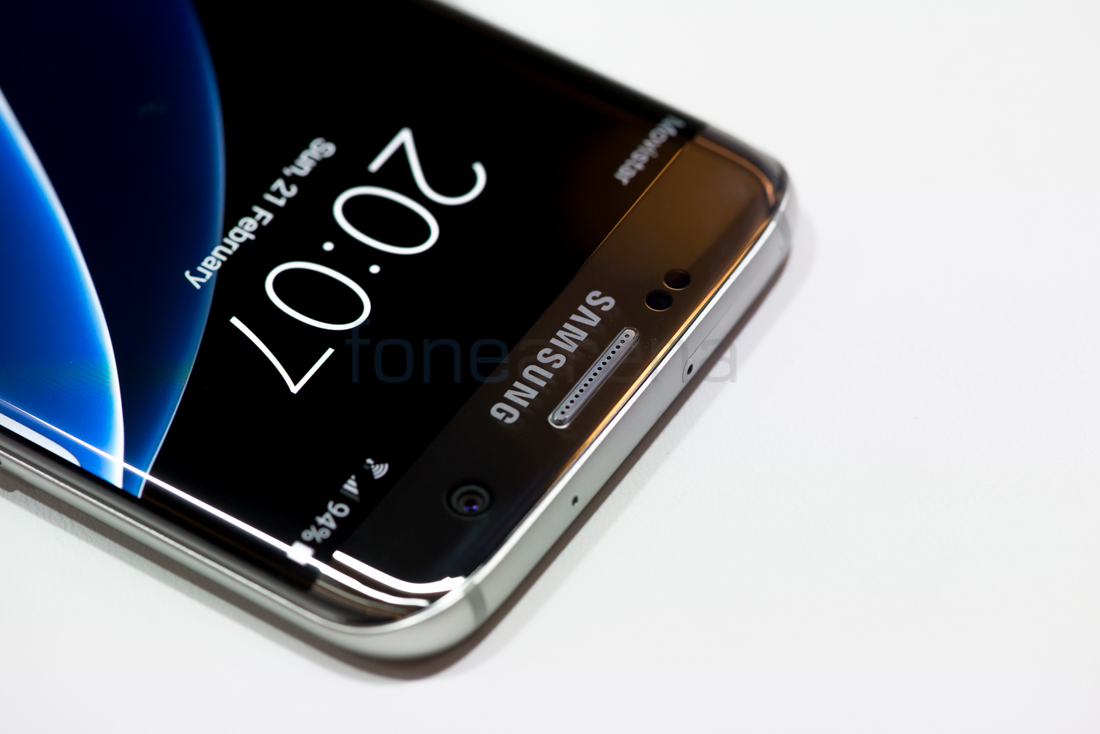 Images and inputs by Sandeep Sarma