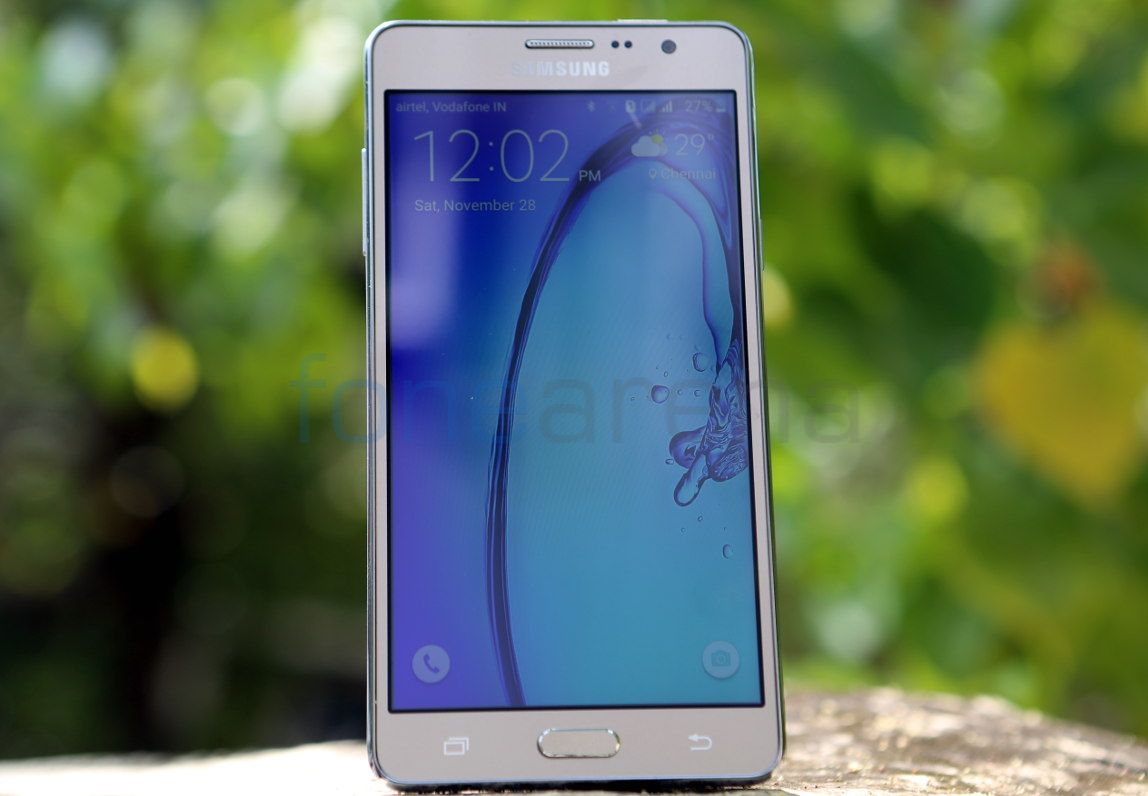 Samsung launched the new ‘Galaxy On’ series of smartphones, Galaxy On5 and Galaxy On7 in India with 4G support earlier this month. These smartphones are cheaper than the Galaxy J5 and Galaxy J7 that were launched in India back in July. The Galaxy On7 is the top-end model of the two, which comes with a large 5.5-inch display. Is the Galaxy On7 worth the price? Let us find out in the complete review. 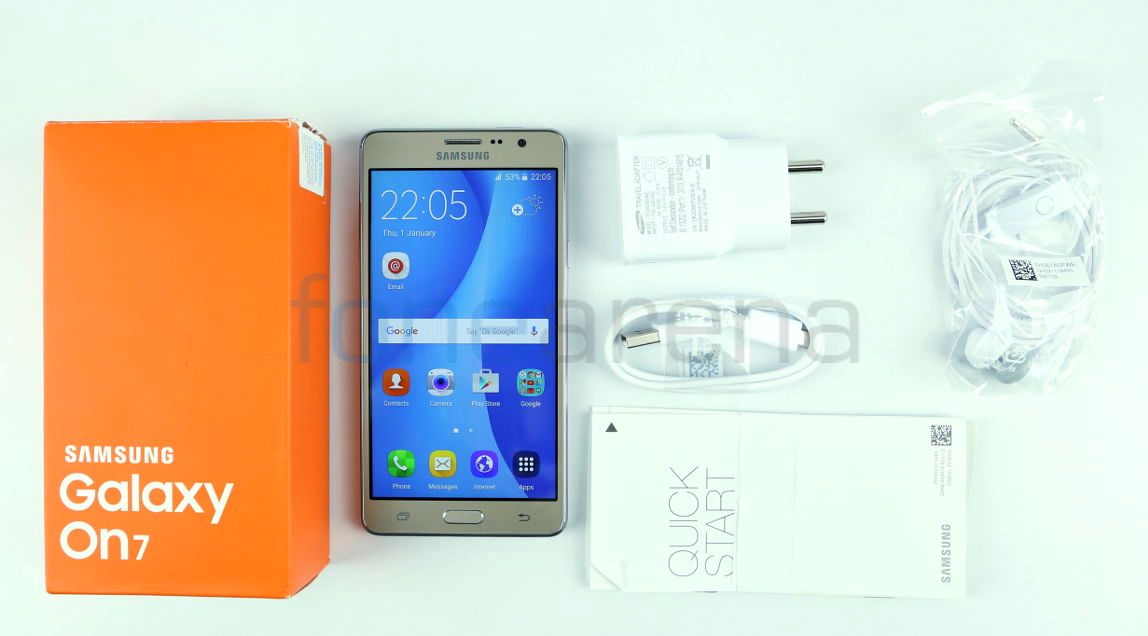 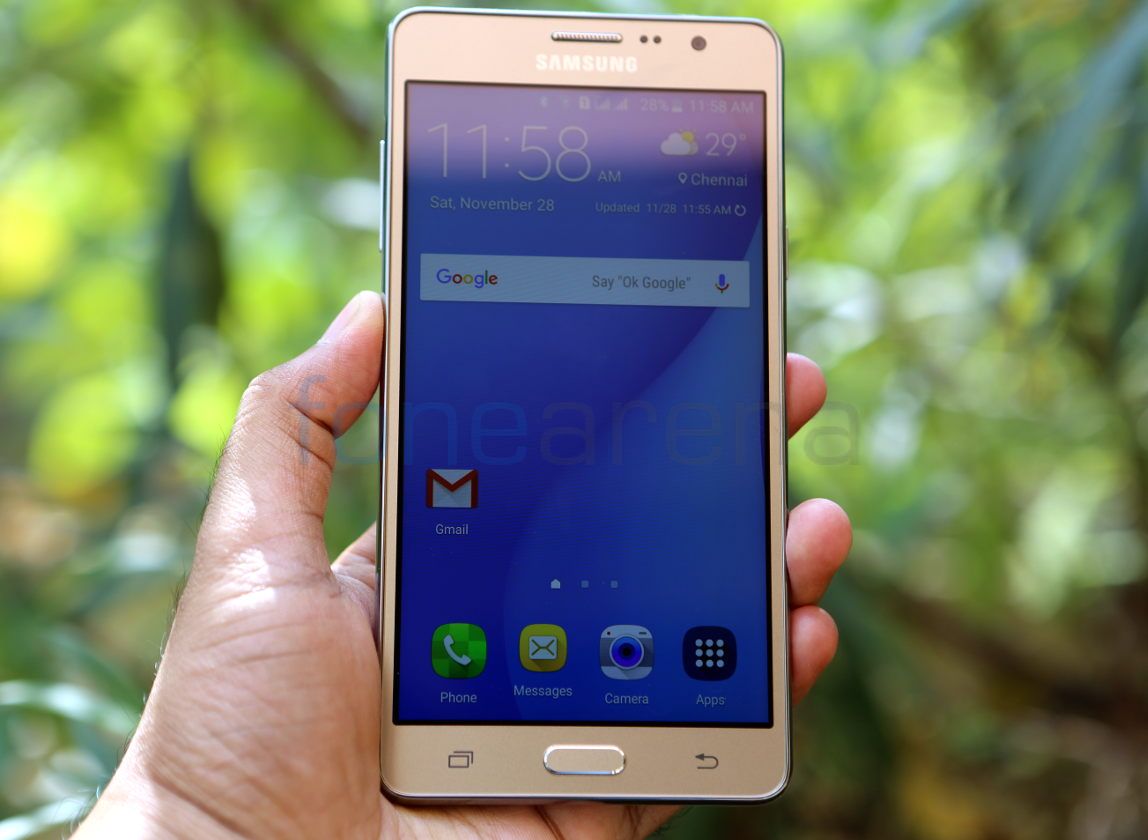 The Galaxy On7 has a 5.5-inch TFT display with a pixel resolution of 1280 x 720 pixels and a pixel density of around 267 PPI. The display is bright, has decent viewing angles, offers vibrant color output and the sunlight visibility is also good. The display is not as good as the Super AMOLED display on the Galaxy J7, but this is just fine. Samsung doesn’t say if the phone has scratch resistant glass. The smartphone is 77.5mm wide and 151.8mm tall, slightly smaller than the Galaxy J7 that also has a 5.5-inch display, but this weights 171 grams, similar to the Galaxy J7, mainly due to the huge battery. 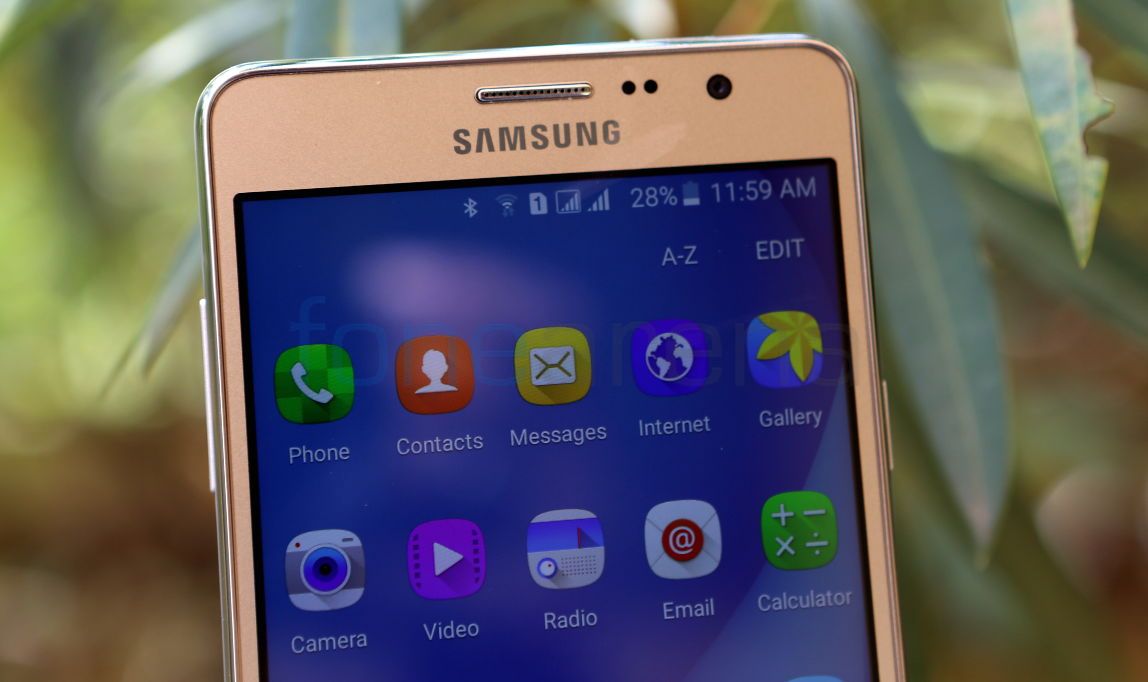 On the top there is a 5-megapixel camera with f/2.2 aperture has wide-selfie that captures 120-degree wide panorama to accommodate more people. Images from the front camera have a lot noise if the lightning is poor and doesn’t have much details. It has a proximity sensor next to the earpiece, but the smartphone lacks an ambient light sensor, even though there is a cutout for it. It also lacks notification LED that is present on most mid-range smartphones.

Since it doesn’t have an ambient light sensor you have to adjust the brightness manually using the slider depending on the conditions. There is an outdoor mode option that increases the brightness for 15 minutes or until the screen is turned off. 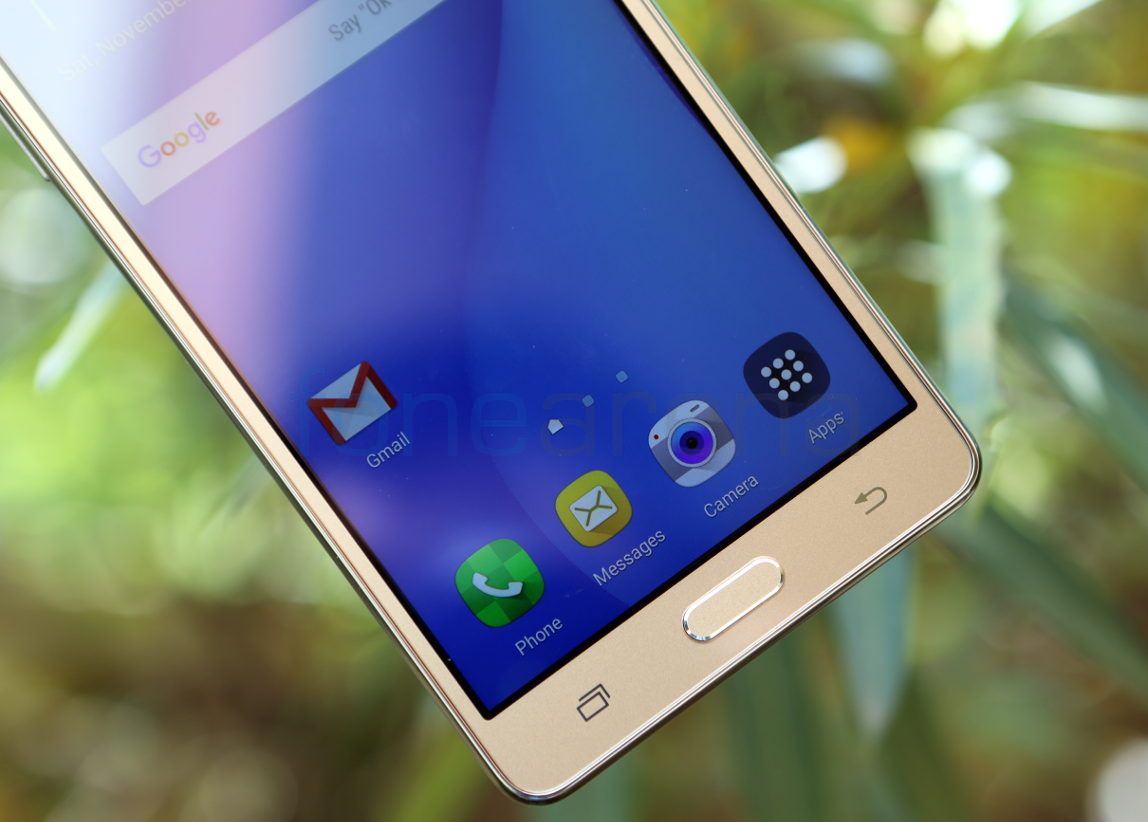 There is Samsung’s signature home button below the display that has a metal finish around it. The capacitive touch buttons for menu and back are present on both the sides. These are not backlit, neither offer haptic feedback when pressed. 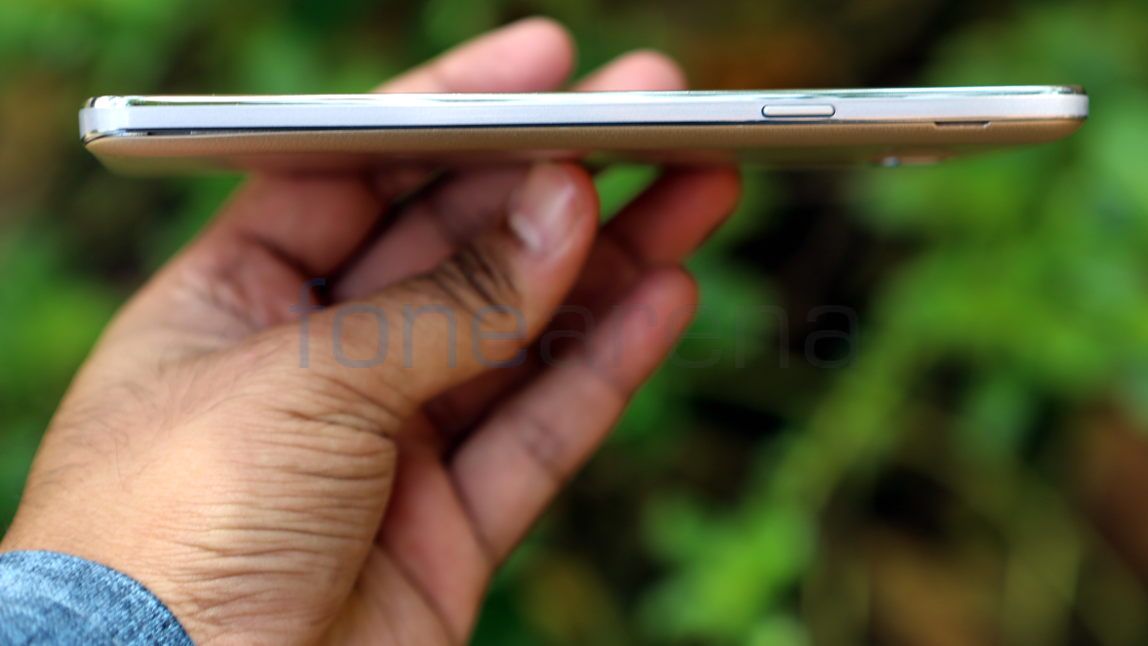 The power button is present on the right side, you can also see a small ridge on the side to open the back cover. The phone has a chrome finish on the side and the smartphone is 8.2mm thick, but it is thicker than the Galaxy J7 and the Galaxy E7 smartphone. 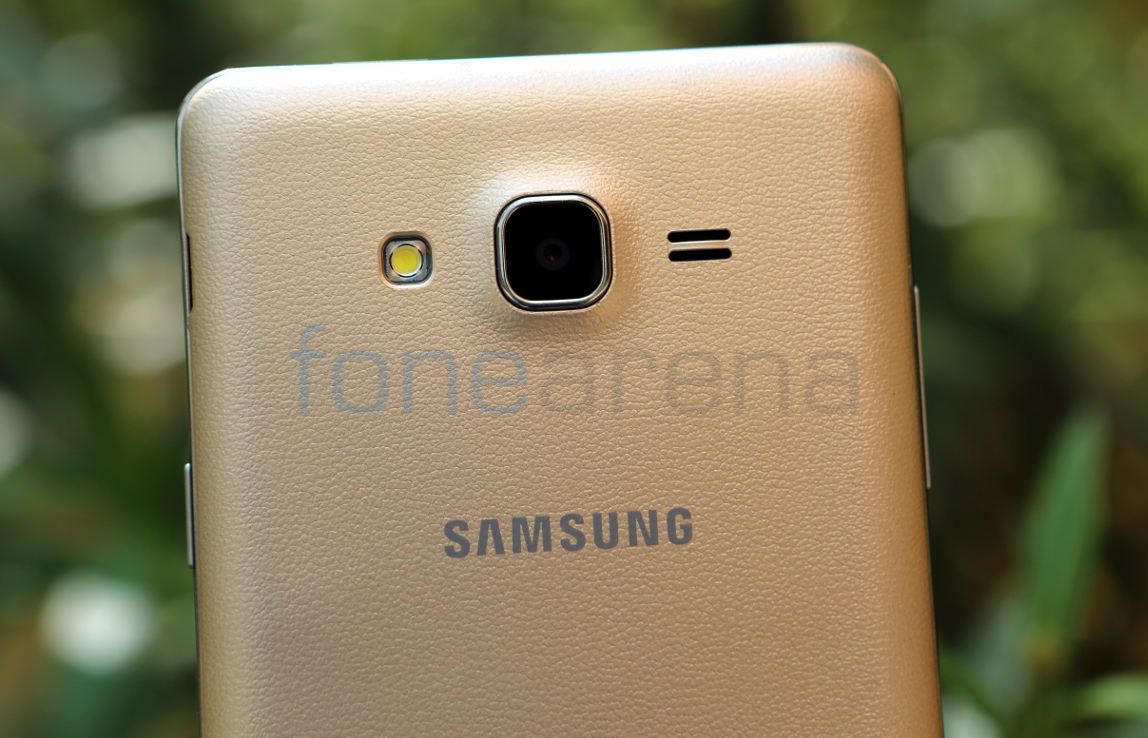 The Galaxy On7 has a 13-megapixel auto focus camera on the back with f/2.1 aperture and single LED flash. The speaker grill is present next to it. 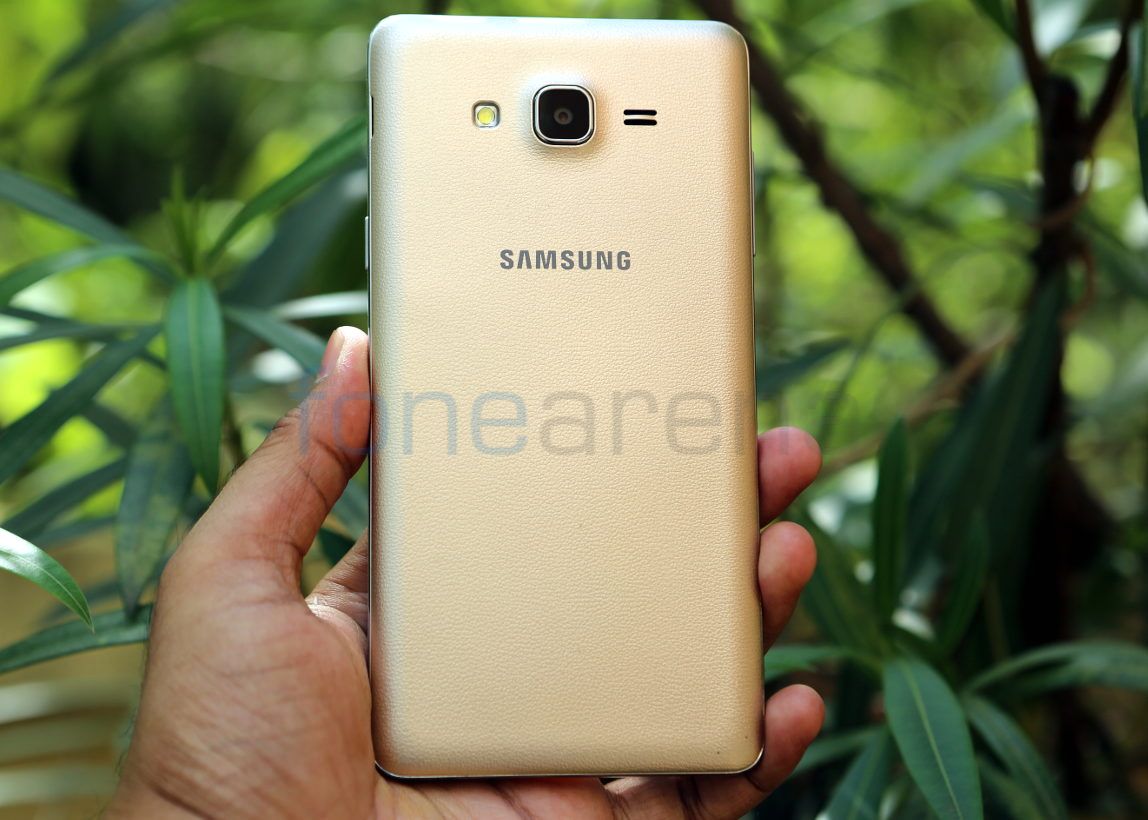 The back cover has smooth, leather-like finish and the phone has sturdy build quality offering a nice grip when holding it. We have the golden colored variant and the smartphone also comes in black color. 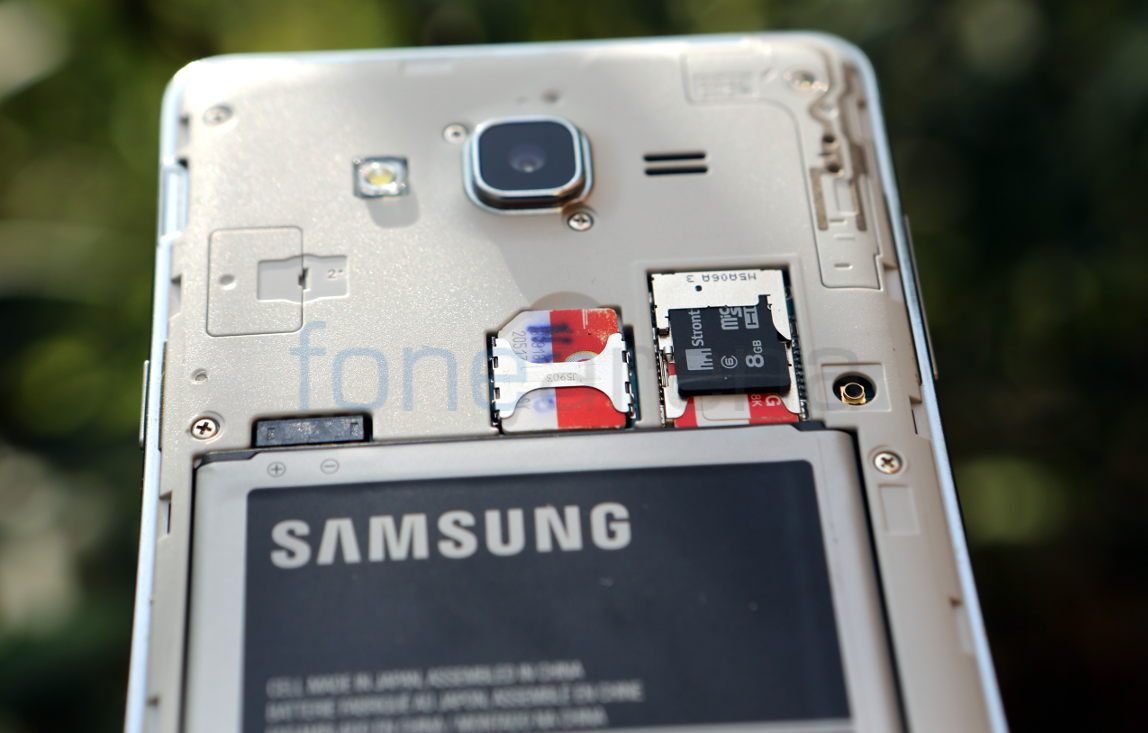 It has two dedicated micro SIM slots and a microSD card slot (expandable up to 128 GB) under the back cover. Both these slots support 4G. 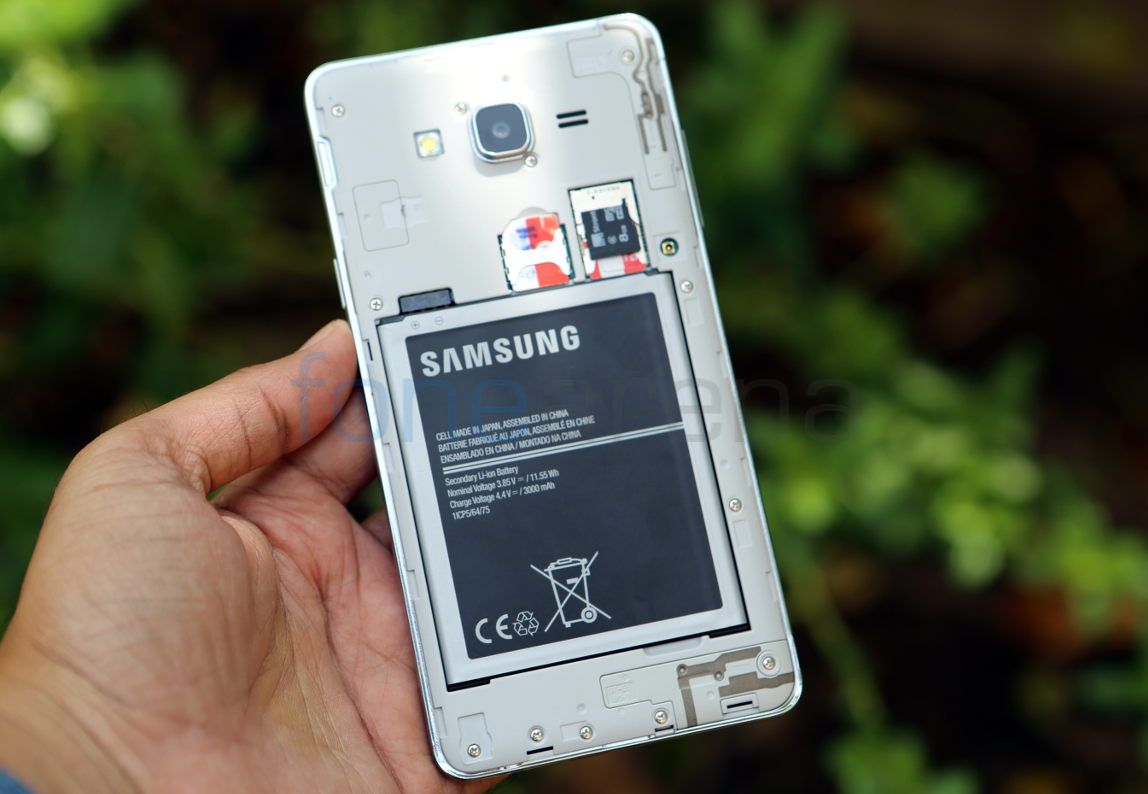 It also has a 3000mAh removable battery so that you can replace it easily. Even though the smartphone doesn’t look premium, the build quality is good. 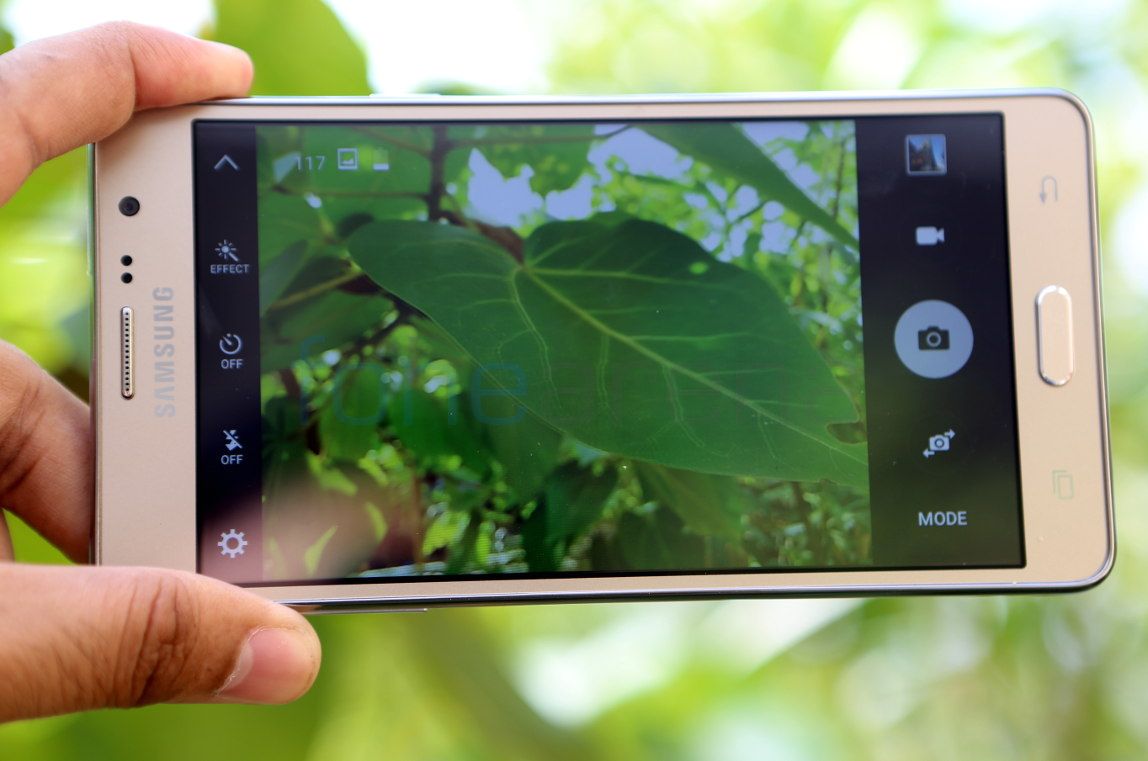 Coming to the camera, the 13-megapixel auto focus rear camera with f/2.1 aperture is good. The camera UI is similar to other Samsung smartphones running Android Lollipop. It has several modes (Auto, Pro (lets you adjust white balance, ISO and exposure manually), Panorama, Continuous shot and Beauty face), Effects ( Grey-scale, Sepia, Negative), and timer ( 2, 5 or 10 seconds). You can also press the home button twice to launch the camera, even when the screen is off and use the volume rockers as camera shutter. Sadly it doesn’t have HDR mode.

Coming to the image quality, daylight shots are good with vibrant colors and details. Macro shots are good, offering nice bokeh effect, thanks to f/2.1 aperture, but it takes a lot of time to focus. Low-light shots have some noise as usual, but the images are not too bad. Images with flash are good since the flash offers an ample amount of light and is not over powering. 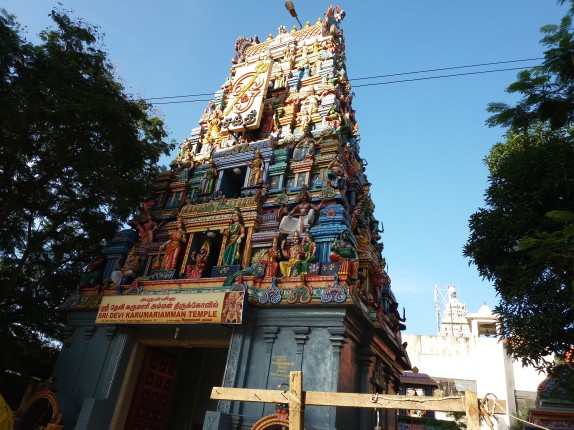 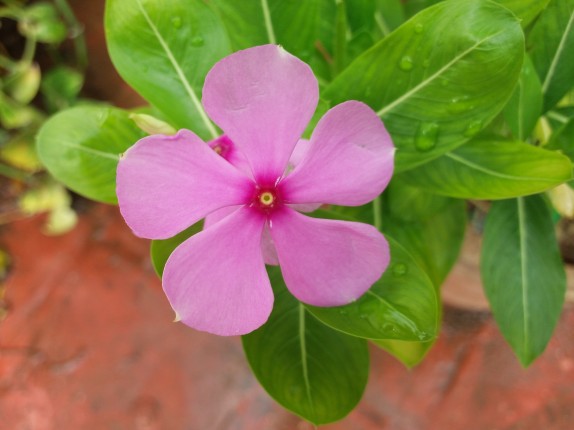 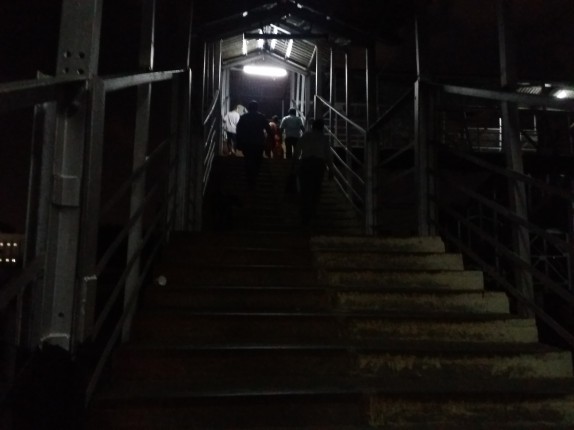 Check out the complete set of Samsung Galaxy On7 camera samples here.

It can record videos at 1080p full HD resolution at 30fps. Video quality is good offering vibrant colors and it is sharp, but the audio is not crisp since it doesn’t have a secondary microphone. Check out the video sample below. 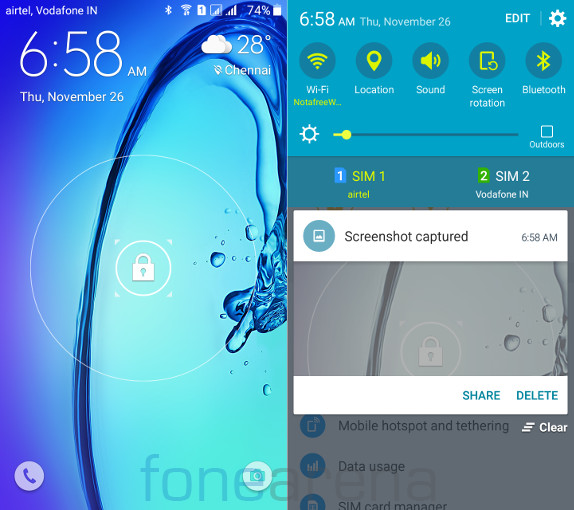 Coming to the software, it runs on Android 5.1.1 (Lollipop) with Samsung’s own UI on top, similar to most of the latest Samsung smartphones. The lockscreen shows weather info and lets you launch the dialer and camera easily. The drop-down notification bar has several toggles and lets you customize the row accordingly. It also has brightness slider with a toggle for outdoor mode and an option to switch either SIMs as primary. 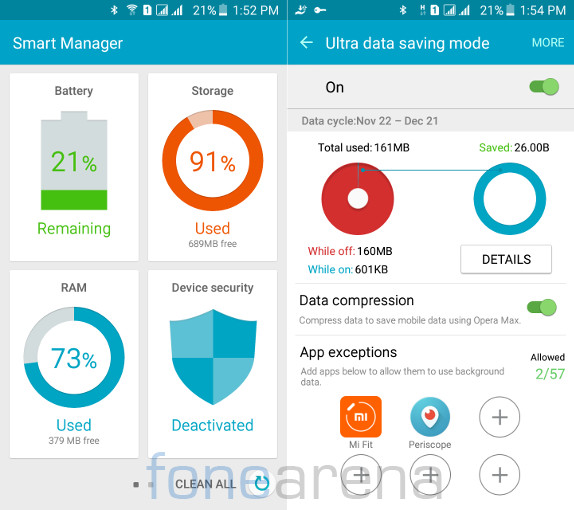 It has a Smart Manager app lets you manage your device’s battery life, storage, RAM usage, and security all in one place. The Ultra data saving mode powered by Opera Max compresses cellular data across all contents such as videos, photos, media, almost all apps and websites. It compresses and reroutes data to the data-savings cloud using a Virtual Private Network (VPN). You can also add app exceptions if you don’t want data from an app to be compressed. It offers timeline of app usage and how much data is saved in a day or month. You can also check out data savings by individual app as well. Built-in data compression on a smartphone is a useful feature for a country like India where data packs are costly. 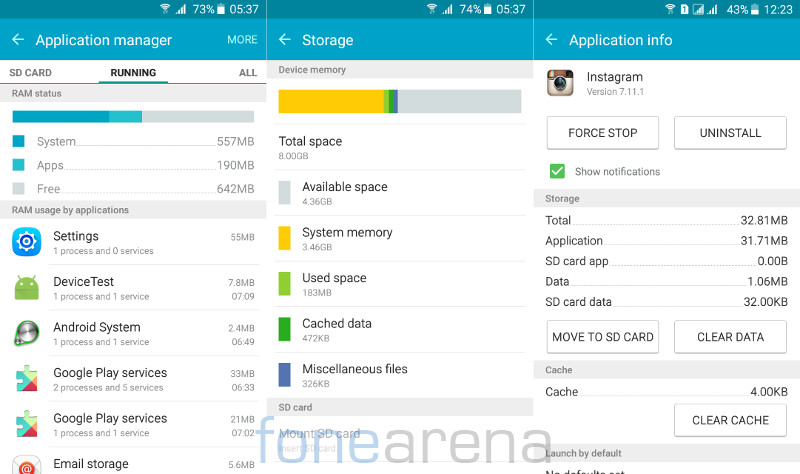 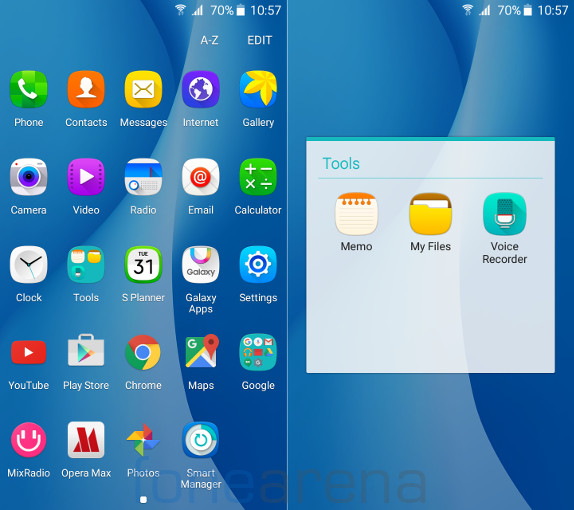 Apart from the usual set of utility apps and Google Apps, the smartphone comes with MixRadio, which is available for all the Samsung phones through exclusive partnership with MixRadio and Opera Max, which powers the Ultra data saving mode. It doesn’t have any other bloatware or additional games. 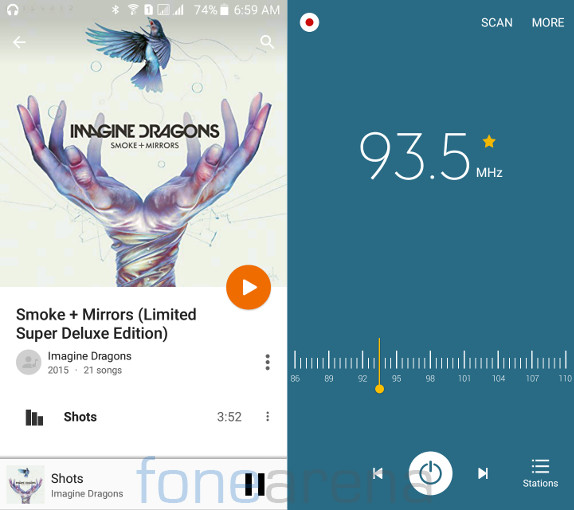 It doesn’t have a dedicated music player, so you have to rely on Google Play Music. It also doesn’t have equalizer, but it has SoundAlive+ and Tube Amp sound effects that can be enabled from the settings. This improves the audio when listening through earphones. That said, audio through earphones is good, but the loudspeaker output is just average, and could have been better. It has FM Radio with auto scanning and recording, which lets you store the recorded files in phone memory or SD card. 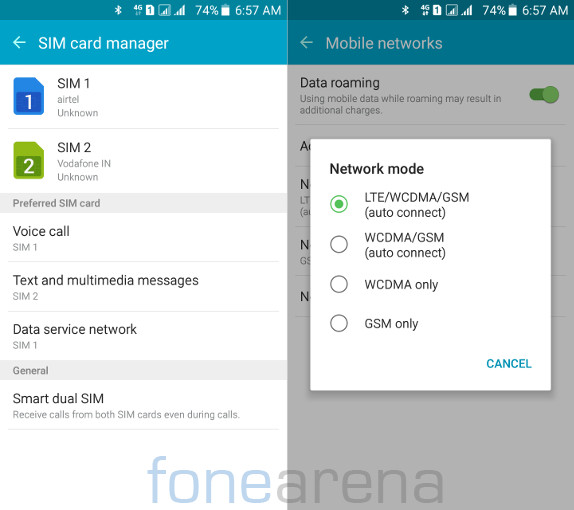 It has the usual set of connectivity features such as WiFi 802.11 b/g/n, Bluetooth 4.0 and GPS. It has 4G connectivity with support for TD-LTE 2300MHz (Band 40) and FDD-LTE 1800MHz (Band 3) for India. Both the SIMs support 4G, but you can enable 4G only in one SIM at a time, while the other goes to 2G. As usual it has Smart Dual SIM feature, similar to other latest Samsung Dual SIM smartphones. This automatically forwards calls from the phone number on SIM 2, even if a user is on the phone with SIM 1’s number. It also has USB on-the-go (OTG) support so that you can connect OTG drives easily. 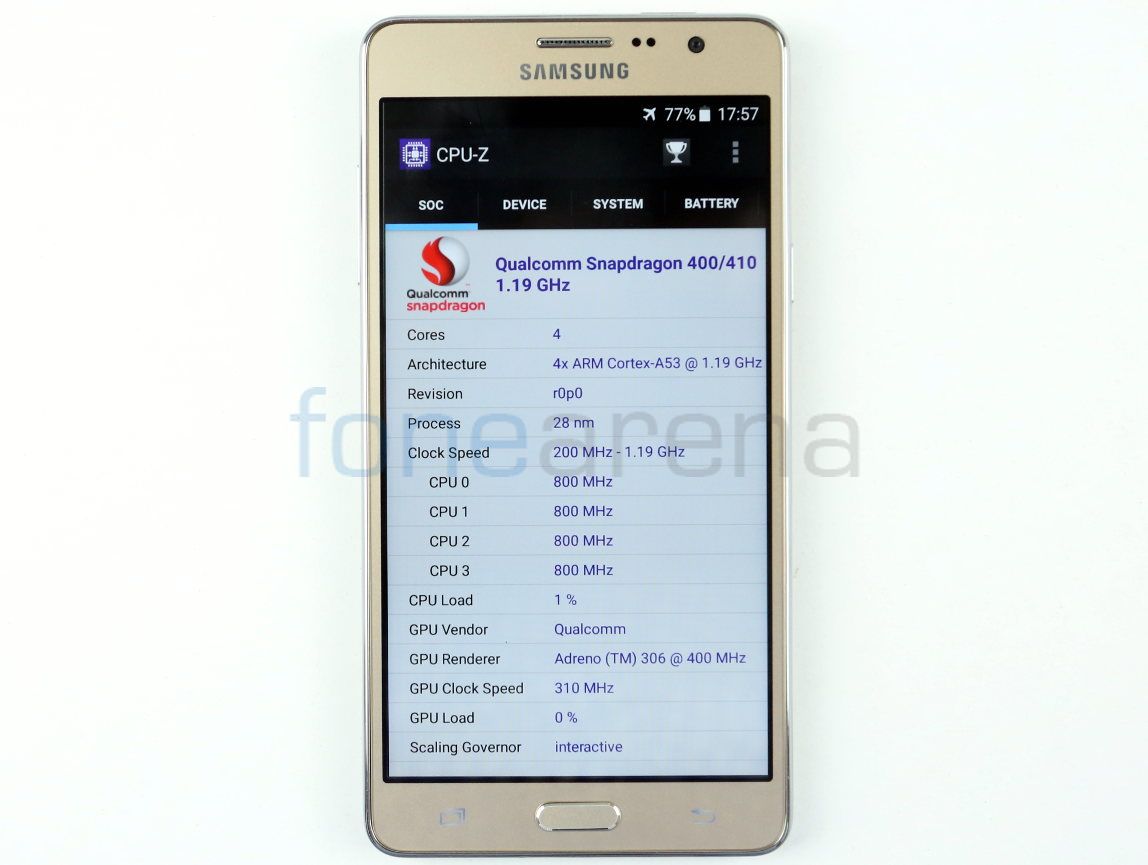 Coming to the performance, the smartphone has a quad-core Snapdragon 410 (MSM8916) 64-bit SoC with four ARM Cortex-A53 CPUs clocked at 1.19 GHz per core, similar to the Galaxy A5. The performance is good without any lags. 1.5GB RAM is enough to run several apps in the background, but the TouchWiz UI uses more RAM, so it would have been better if it had 2GB of RAM. Most smartphones in this price range offer 2GB of RAM. It doesn’t get heated on 3G/4G use. Check out some synthetic benchmark scores.
Quadrant Benchmark 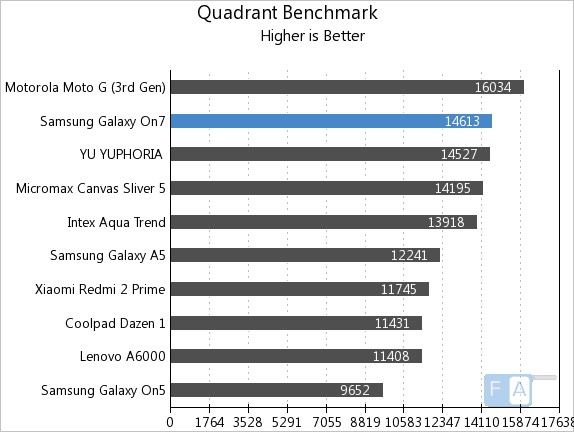 It scored 14613 points in the Quadrant Benchmark and grabs the second spot, behind the Moto G 3rd Gen. 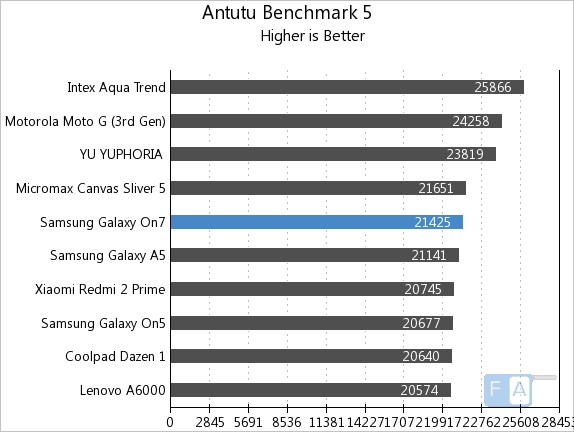 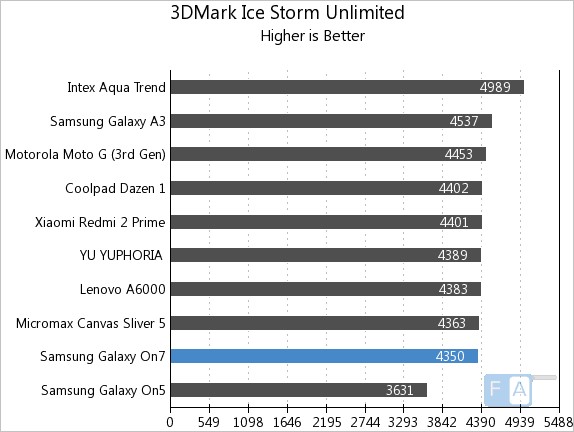 It managed to score 4350 points in the 3DMark Ice Storm Unlimited GPU benchmark. 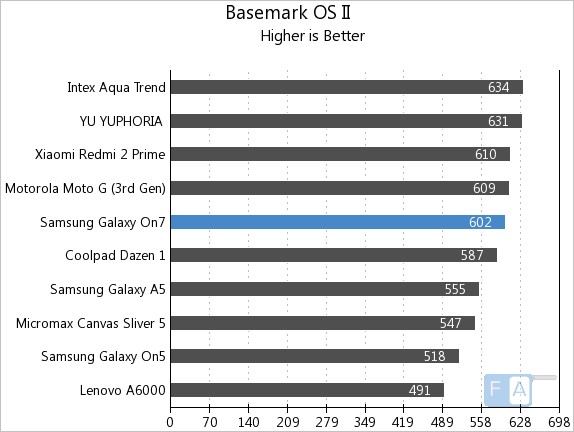 It clocked 602 points in the Basemark OS II benchmark. Check out the complete set of Samsung Galaxy On7 Benchmarks here.

We tried several games. Most games were smooth and the graphics was good too. It supports both USB or PS3 controllers via USB. It scored 4/5 stars in our gaming review. Check out the gaming review to know more about the gaming performance of the smartphone in detail. 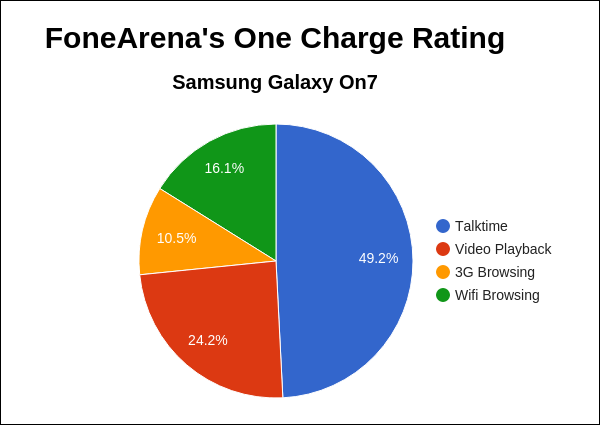 Coming to battery life, the 3000mAh battery lasts for the whole day from average to heavy use such as 4G LTE with both the SIM cards, similar to the Galaxy J7. With minimal use, it lasts for more than a day. The power saving mode and ultra power saving mode lets you extend the battery life. The smartphone also has a removable battery, so you can swap it easily when required.

In our battery test the smartphone achieved a One Charge Rating of 12 hours and 42 minutes, which is less than Galaxy J7’s rating of 15 hours and 1 minute, but this is still good compared to other mid-range smartphones. Check out the complete set of Galaxy On7 battery life test results here.

The Galaxy On7 is a good mid-range smartphone for the price from Samsung. It has a good display, camera and battery life, but Samsung has missed out the ambient light sensor for auto brightness adjustment yet again. The Galaxy J7 has 16GB of storage, but 8GB of storage on the ‘On series’ smartphones is not enough since only 4.3GB is usable. Samsung should also increase the RAM to at least 2GB, since most of their mid-range smartphones have only 1.5GB of RAM. Those things aside, Samsung has priced the Galaxy On7 at Rs. 10,990, which is decent compared to its earlier smartphones in the price range. It is exclusive to Flipkart, but it is not sold through flash sales, so you can get it easily. To summarize, here are the pros and cons of the smartphone.