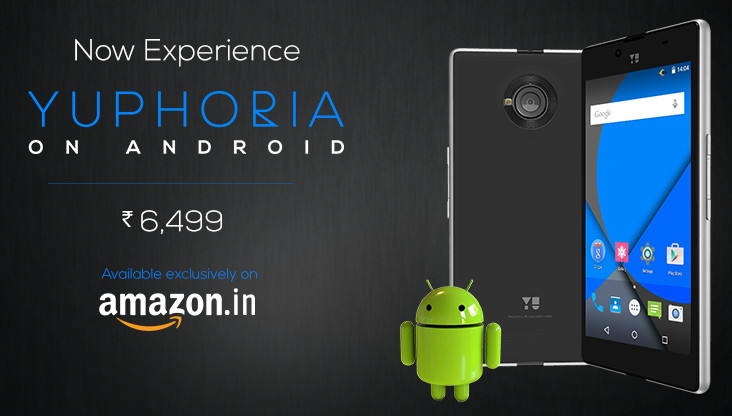 YU launched the YUPHORIA smartphone back in May for Rs. 6,999, which went on sale on exclusively on Amazon at the end of May. Today the company has announced a Rs. 500 price cut for the smartphone, which now comes with stock Android 5.1.1 (Lollipop) instead of Cyanogen OS 12 based on Android 5.0 (Lollipop).

To remind you, the YUPHORIA packs a 5-inch (1280 x 720 pixels) IPS display, is powered by a Quad-Core 64-bit Qualcomm Snapdragon 410 processor, has a 8-megapixel auto focus rear camera with LED Flash, 5-megapixel front-facing camera, packs 2GB of RAM, 16GB of internal storage with expansion slot and a 2230mAh battery. It also has 4G LTE support, including support for 4G LTE bands (TDD B40 2300MHz and FDD B3 1800MHz) for India. It also has Cirrus Logic Wolfson Stereo DAC chipset.

The YU YUPHORIA Buffed Steel model running stock Android Lollipop is available from Amazon.in for Rs. 6,499. The YUREKA PLUS smartphone that got a price cut to Rs. 8,999 in August is also available from Amazon.in running stock Android 5.0 (Lollipop). YU recently announced that most expected Cyanogen OS 12.1 update based on Android 5.1.1 (Lollipop) for current devices running on Cyanogen OS 12 will release soon.