Xiaomi Mi 4c which is said to be an advanced version of the Mi 4i was spotted at AnTuTu benchmark listing last month and was also certified at TENAA. Today, a leaked image of a packaged retail box of the phone is showing all the specs of the phone. 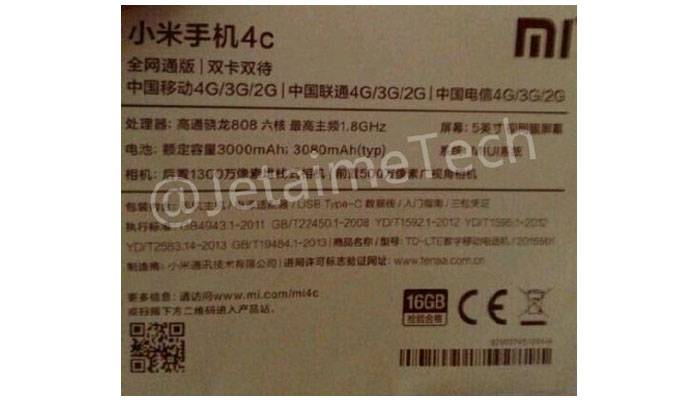 The specification on the retail pack reveals that the Mi 4c will sport a reversible USB- Type C port. It will be powered by a Snapdragon 808 processor which features two high power Cortex-A57 CPU cores, four lower power A53 cores and an Adreno 418 GPU. Earlier leaks had stated that the phone will have a 5-inch screen with a 1080 x 1920 resolution, and a 441ppi pixel density.

Other details mentioned on the box includes 2GB RAM and 16GB internal memory and  a 3,080mAh battery. It is said that a 32GB model is also in the works. Moving on, the leak also suggests LTE support, 13 mega-pixel main and a 5 mega-pixel front camera. The Xiaomi Mi 4c will be unveiled September 24th and will go on sale October 3rd. It is expected that the phone will be priced at around 1,299 Yuan. Also, it is said that Xiaomi is planning to offer only 1 lakh units of the the Mi 4C.