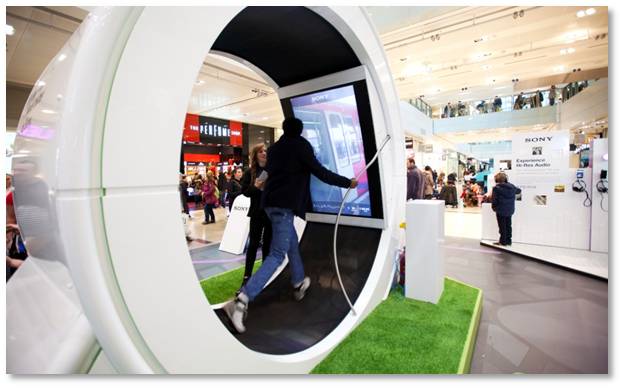 Rather than introduce a new smartphone every six months, Sony has adopted a yearly cycle for updates and as part of this, is increasing the marketing activity around its current flagship, the Xperia Z3. One of the impressive devices introduced last year, the Xperia Z3 is being dubbed as the ultimate fitness companion and now Sony’s taken this one step further with a high-tech hamster wheel.

Sony is calling the contraption a “high-tech, interactive fitness wheel” that is designed to “show consumers how to enhance their everyday experiences with SmartWear and Xperia Z3”. The Sony Wheel was launched at Westfield Stratford in London over the weekend and will soon be touring other major shopping centres around the UK.

The 3.2m high wheel is designed to introduce Sony’s suite of applications and services – from the waterproof technology to the low light photography of the Xperia Z3 to the fitness abilities of the SmartBand Talk and SmartWatch 3 – to the British public and incorporates first-person narrative to simulate every day scenarios. Such scenarios include going for a run in the rain, tracking your walk to work or seeing a complete breakdown of your daily activities with Sony’s Lifelog application.

Check out the Sony Wheel at Westfield Stratford until March 16th after which it will go on tour visiting the UK’s biggest shopping centres including the Bullring Birmingham, Manchester Arndale Shopping Centre and Eldon Square Shopping Centre in Newcastle.