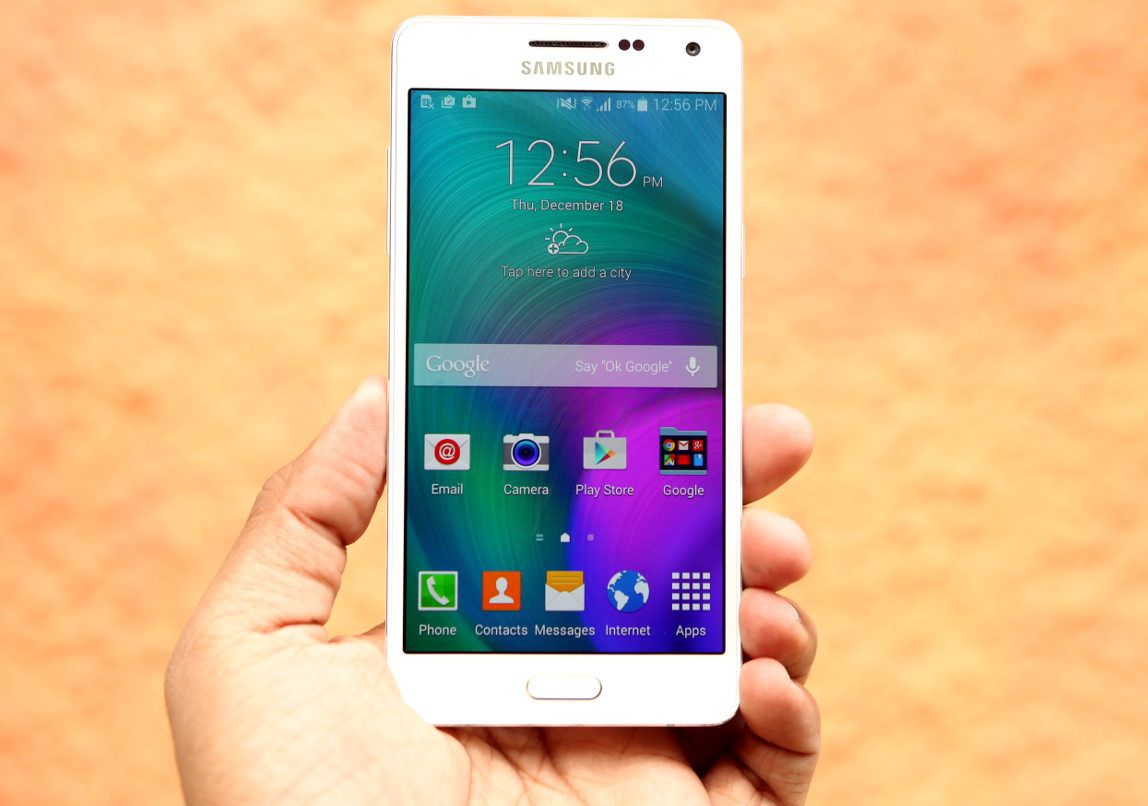 Samsung started changing its track from polycarbonate build, changed its usual design language and finally launched the Galaxy Alpha smartphone with metal chassis, but it still had a plastic back panel. It finally came up with the A series at the end of last year with all metal unibody design The Galaxy A3 and Galaxy A5 were launched in India last month. The Galaxy A5 is the top-end model in the A series that is currently available in India. Samsung even introduced the Galaxy A7 with a larger 1080p display, but it is not available in India yet. All metal body gives it a premium look. What about the other aspects of the smartphone? Is the Galaxy A5 worth the price of Rs. 25,500? Let us find out in the complete review. 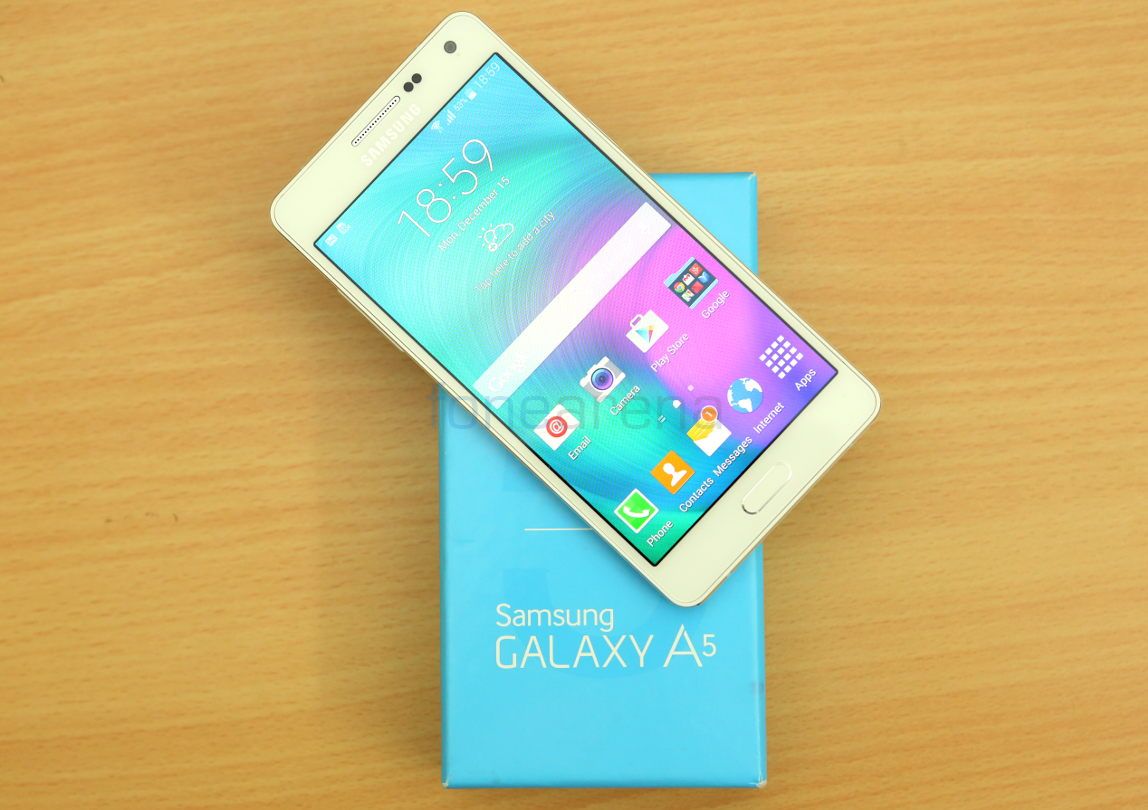 We unboxed the Galaxy A5 smartphone few months back before it launched in India. Check out the unboxing. 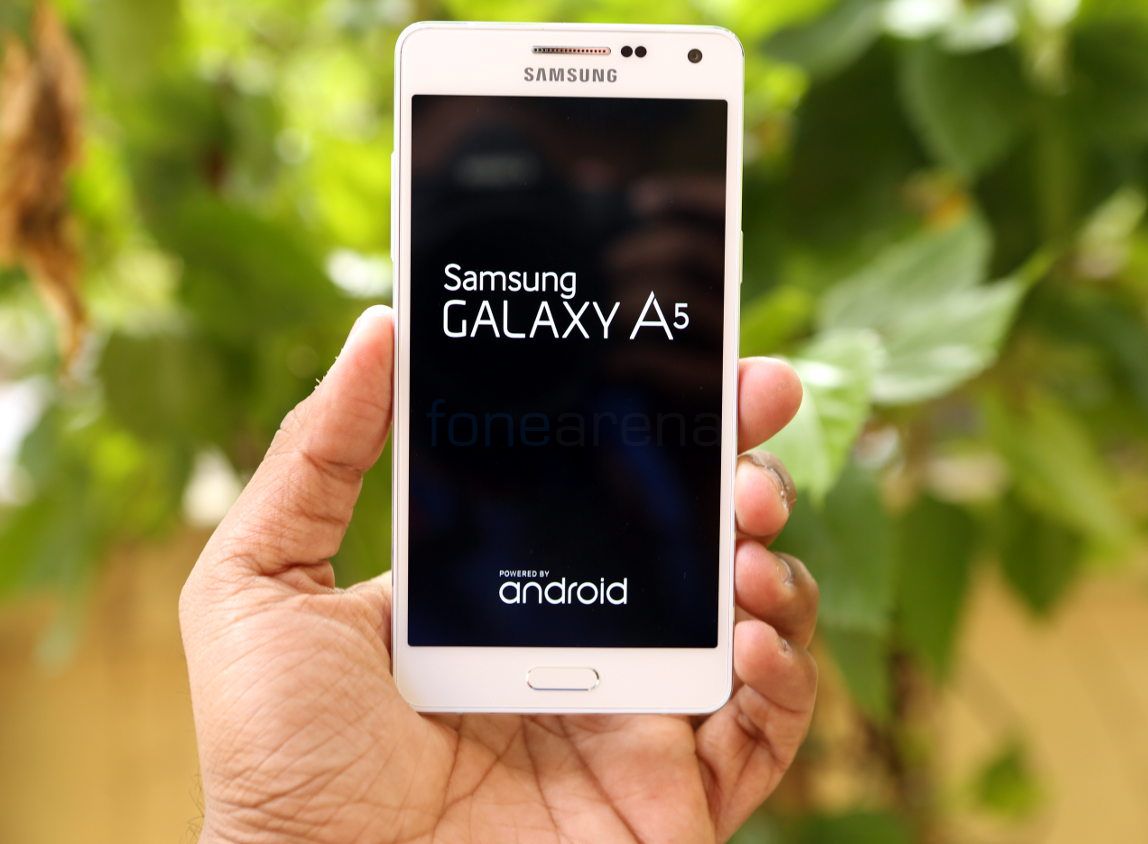 The Galaxy A5 has a 5-inch Super AMOLED display with a pixel resolution of 1280 x 720 pixels and a pixel density of around 294 PPI. The display is bright, has great viewing angles and the text is sharp. Blacks are perfectly black, thanks to the AMOLED panel. The sunlight visibility is also good. This is definitely one of the best HD displays on a 5-inch smartphone. It even has a Corning Gorilla Glass 4 protection, similar to the Galaxy Alpha.

The 5-megapixel front-facing camera is pretty good for selfies. There are the usual set of proximity and ambient light sensors on the top of the display, but it lacks a notification LED light. 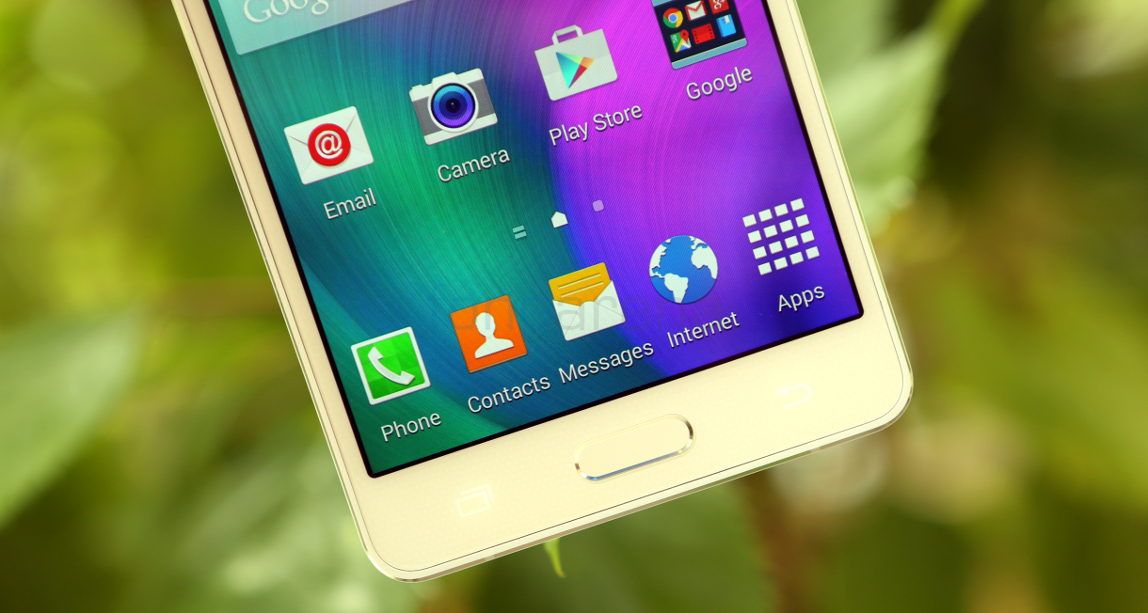 It has Samsung’s signature home button that has a metal finish around it. The capacitive touch buttons are present on both the sides. These are backlit and offer haptic feedback when pressed. Even though these buttons are not clearly visible in day, these are bright enough in the dark. 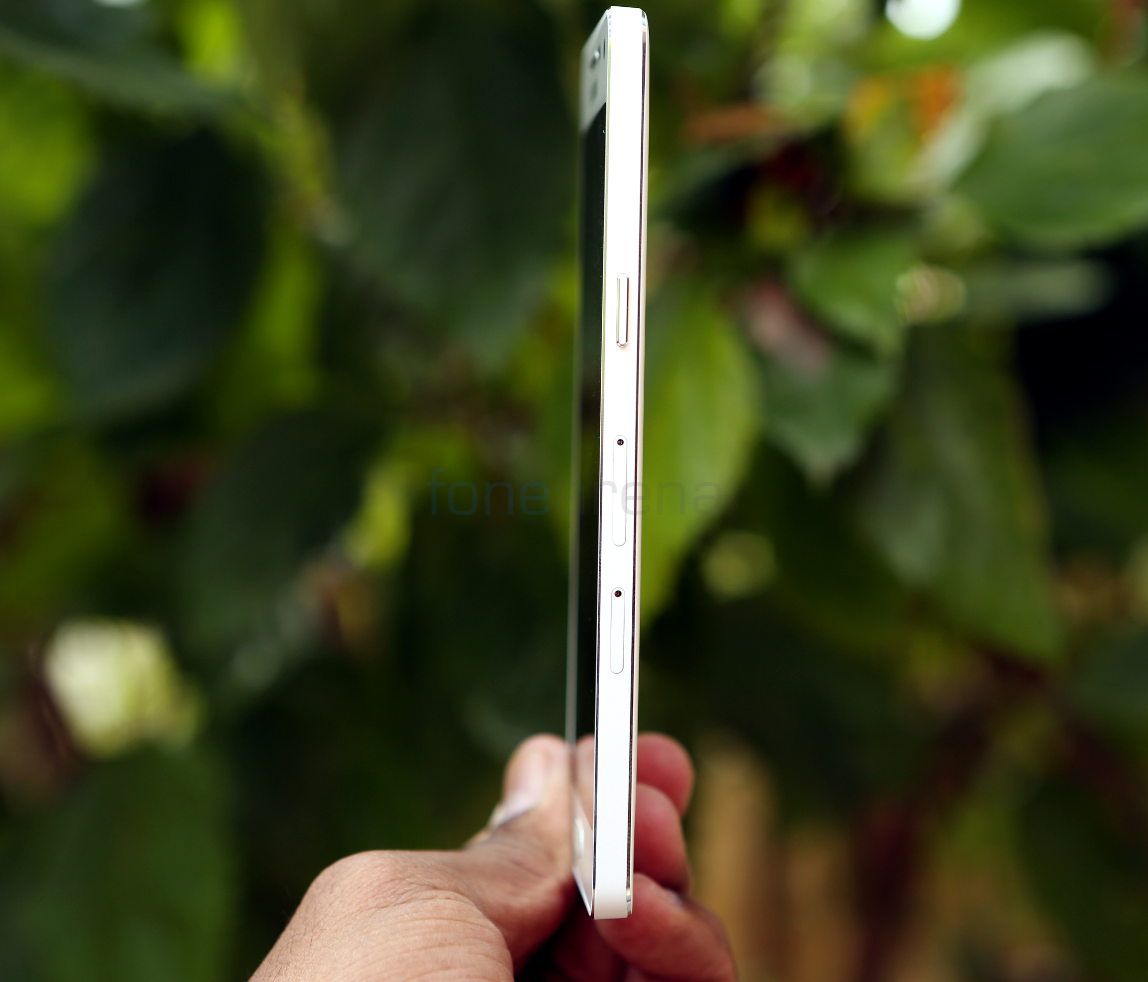 The Galaxy A5 is 6.7mm thick, same as the Galaxy Alpha. The sides too have brushed aluminium finish, hence it is not slippery. There is a primary nano SIM slot, a hybrid SIM / microSD card slot and a power button on the right side. It has chamfered edges and an aluminium frame for a premium look and a solid feel. 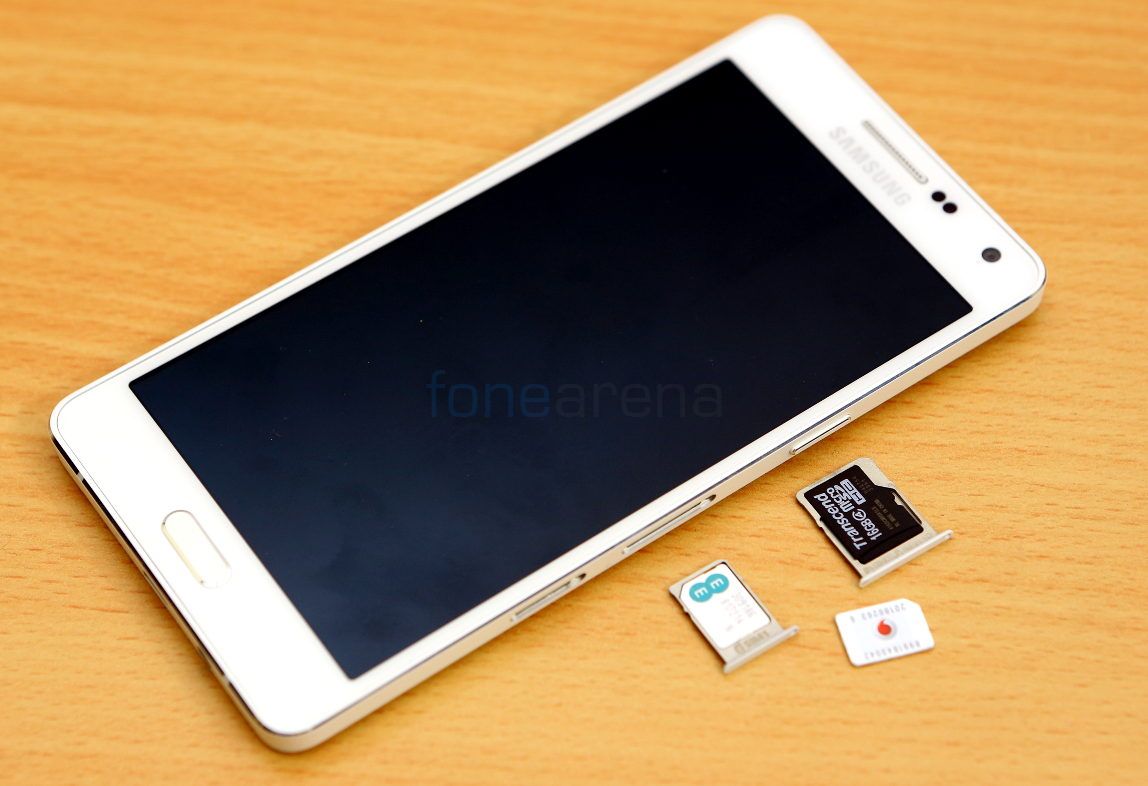 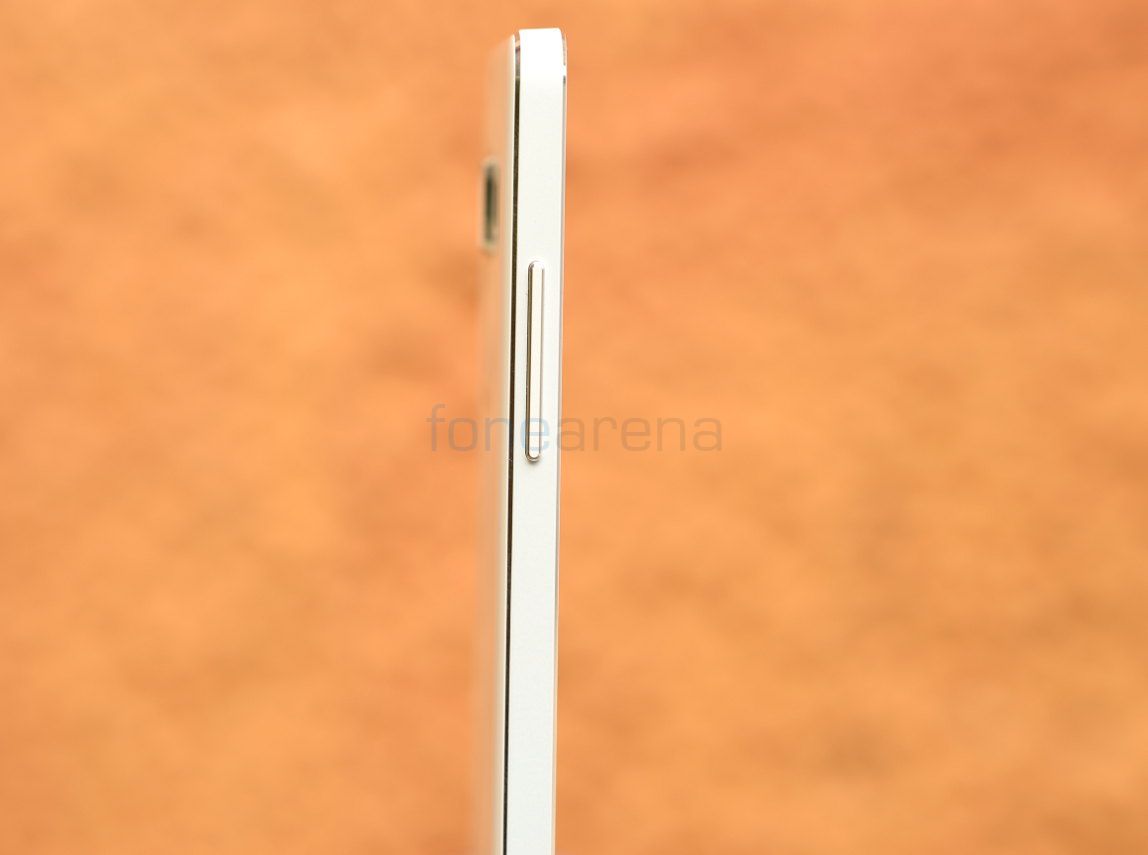 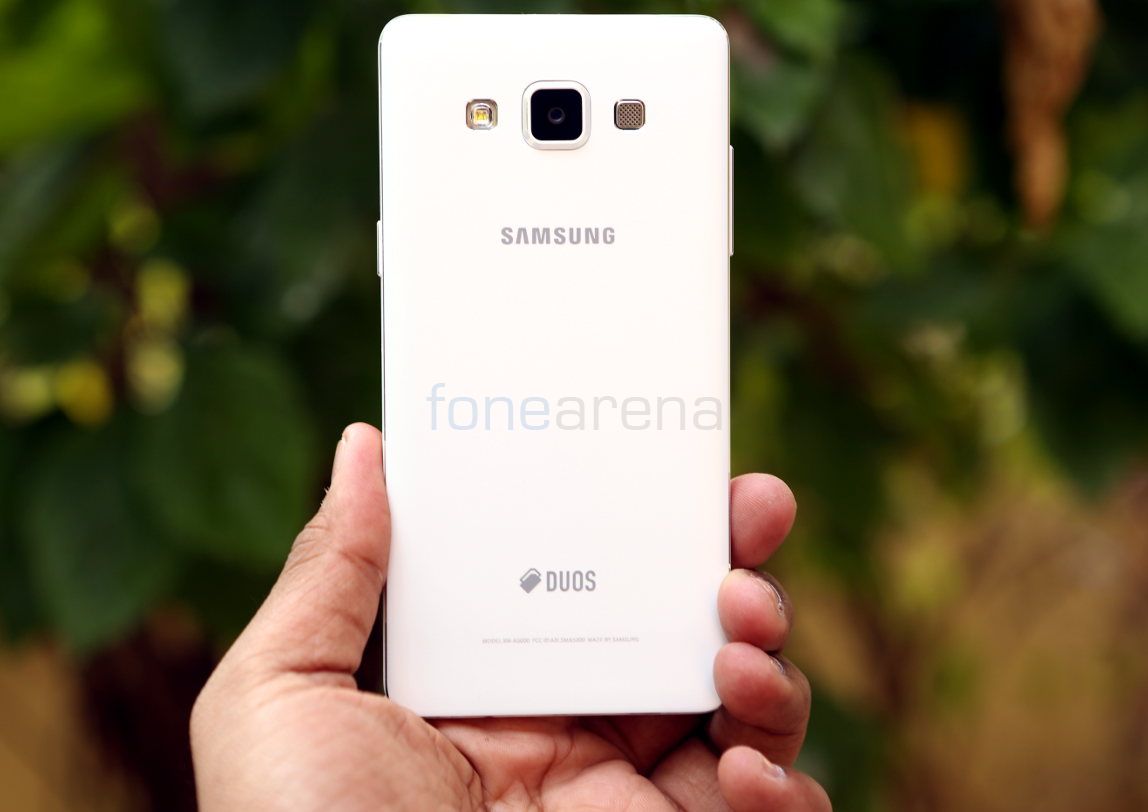 The brushed metal back gives a great feel while holding in your hand and doesn’t slip out easily. Overall the build quality of the smartphone is brilliant. There is a 13-megapixel camera on the back along with a single LED flash next to it and a loudspeaker grill on the other side of the camera. There is a Samsung and Duos branding on the back. The metal back is prone to scratches, so it is not recommended to keep your phone along with metal items such as keys in your pocket. Samsung should release a clear for protecting the smartphone without spoiling its looks. 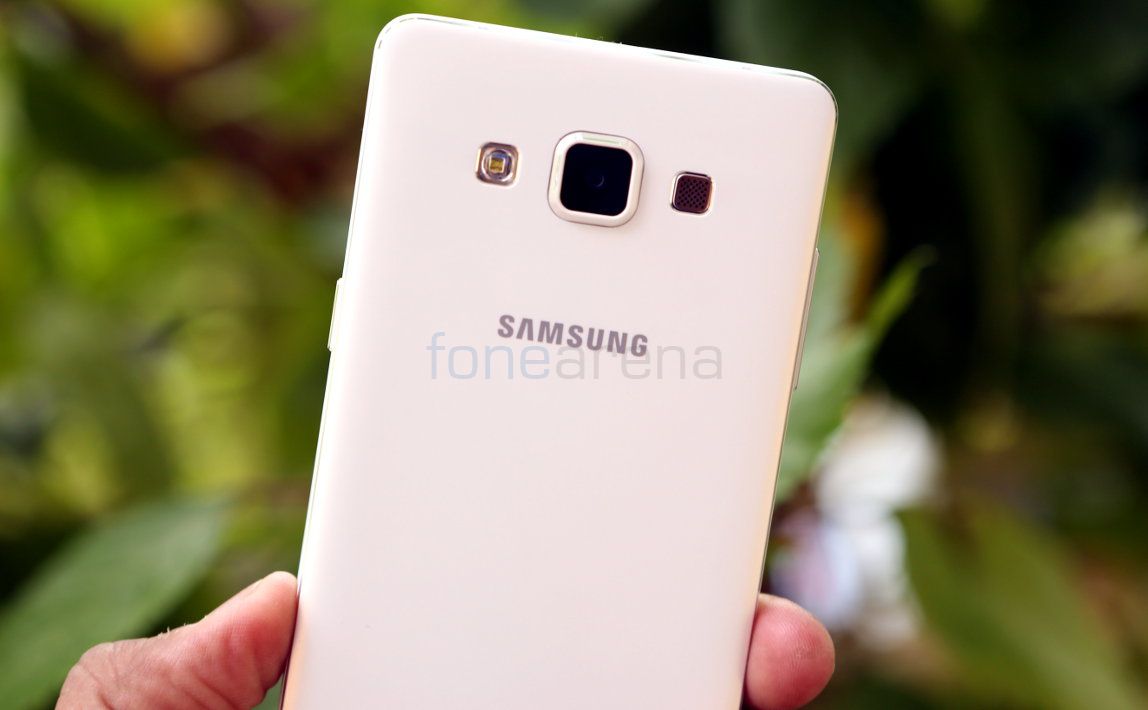 Coming to the camera, the Galaxy A5 has a 13-megapixel sensor with f/2.0 aperture. It has several modes such as HDR, panorama, shot & more, Rear-cam selfie, beauty face and more. Images were sharp with vibrant color output. Macro shots were good too, but low-light images had a lot of noise obviously and were blurry without any sharpness. Check out some camera samples below (Click the image to view the full resolution sample). 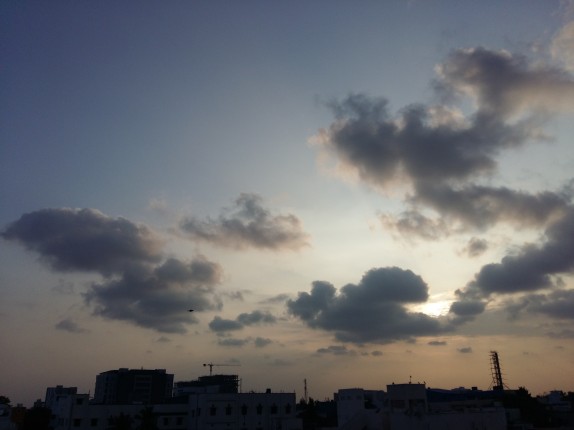 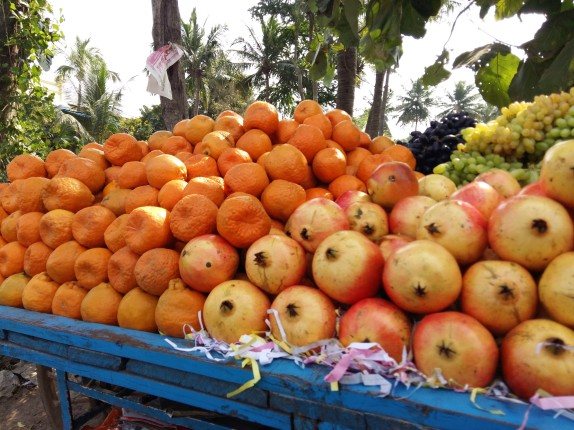 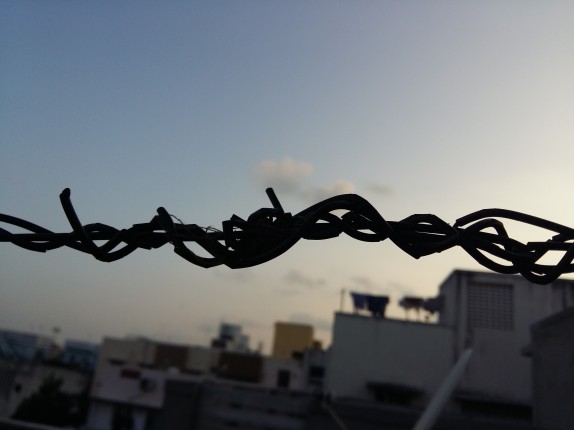 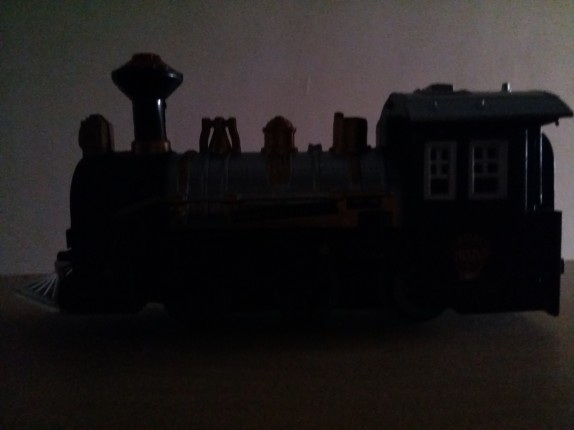 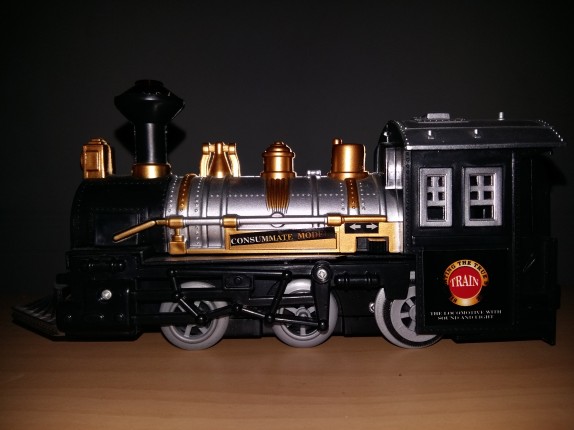 It can record videos at 1080p resolution at 30fps, however it doesn’t support slow motion support like the Galaxy Alpha. The video is decent. Check out the 1080p video sample.

Check out the complete set of Samsung Galaxy A5 samples here. 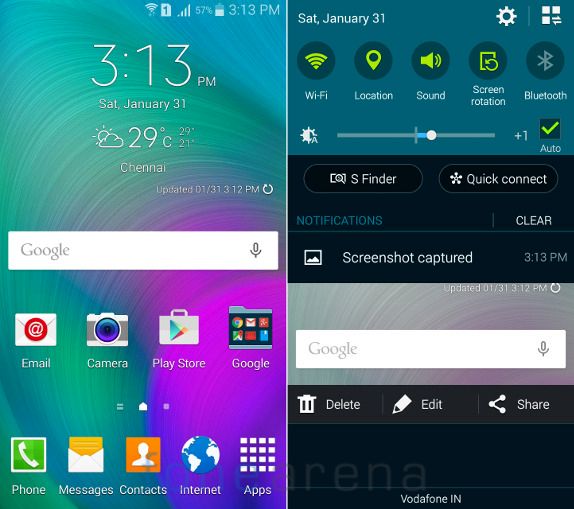 Coming to the software, it runs on Android 4.4.4 KitKat with TouchWiz UI on top. It has a drop-down notification bar that has quick toggles that are customizable, S Finder, Quick Connect and Brightness adjustment slider. 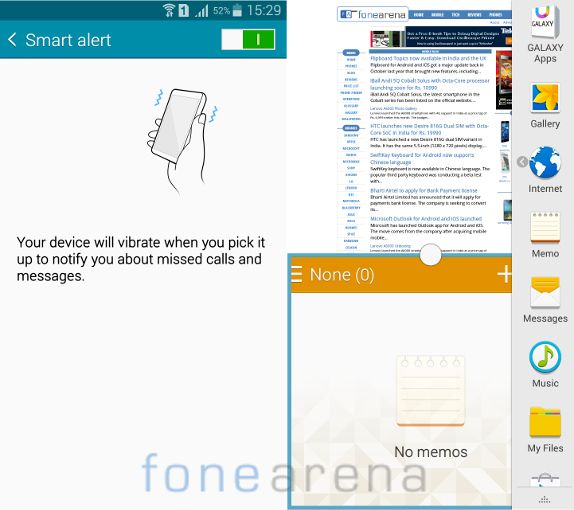 Even though this just has a 5-inch screen and is compact to hold, it has one-handed operation feature that lets you adjust the screen size and layout when using the device with one hand. It also has smart stay that enables the screen stay on when you are looking at it. The smart stay uses the phone’s front camera, so it doesn’t work well in the dark conditions. It also has several motion and gesture features. The smart alert vibrates when you pick up the device if you have missed calls or messages. You can mute the screen by placing your palm on the screen or turning the device over.

It also has multi-window option that lets to run two applications on the screen. This can be accessed by pressing and holding the back button. 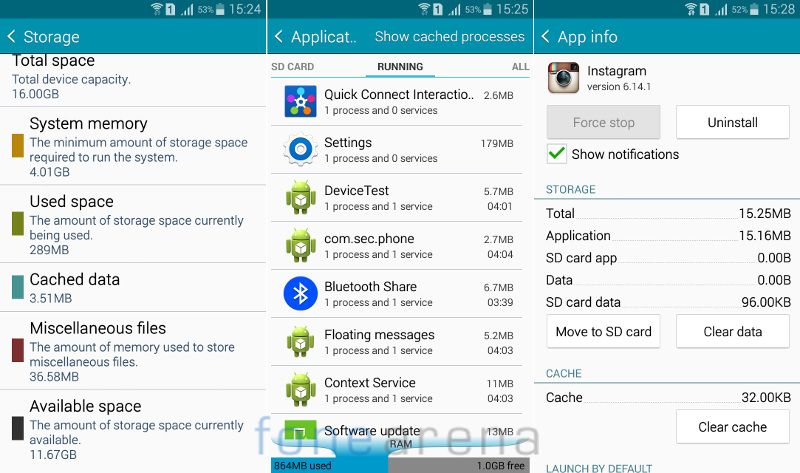 Out of 2GB of RAM, you get 1.89GB of usable RAM, out of which 1GB of RAM is free when the default apps are running in the background. Out of 16GB of internal memory you get 11.67GB of usable memory. You can move compatible apps to the microSD card. 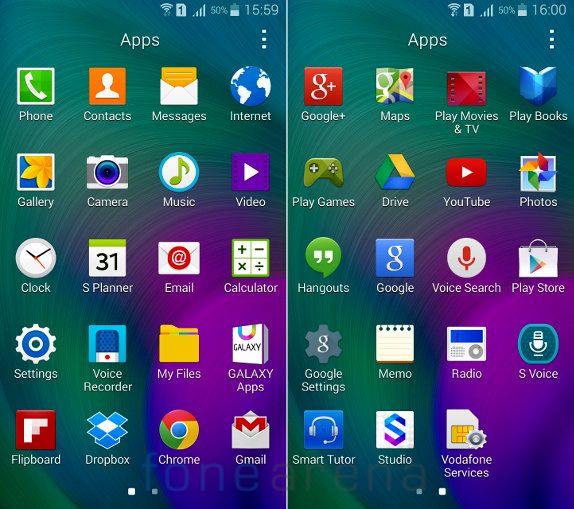 Apart from the usual set of utility apps and Google apps, it comes pre-loaded with Dropbox and Flipboard. 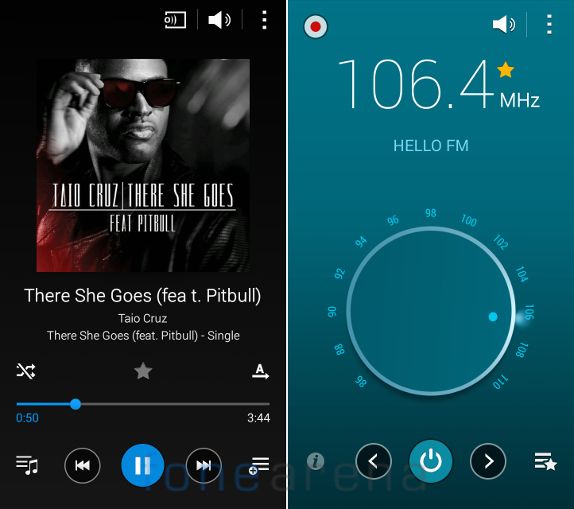 The music player has a simple UI and can play a range of audio formats. The SoundAlive equalizer settings has different equalizer presets. The phone has FM Radio with auto scan and recording. The loudspeaker output is decent and the bundled in-ear earphones are average too. The video player can play 1080p videos smoothly and it has popup play support. 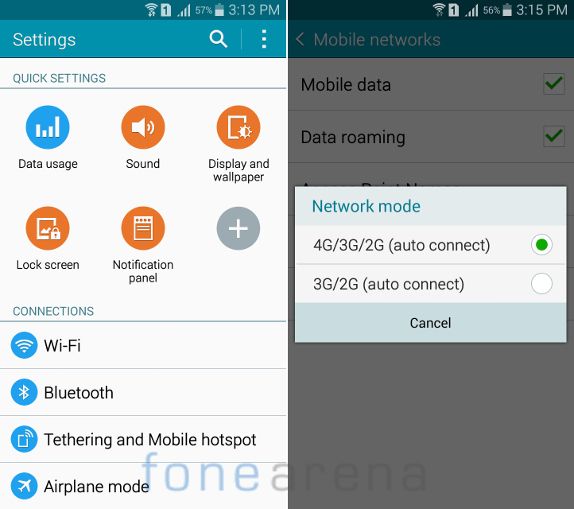 It has the usual set of connectivity features such as WiFi 802.11 a/b/g/n, Bluetooth 4.0 and GPS + GLONASS, but it lacks USB OTG support. It has 4G connectivity with support for TD-LTE 2300MHz (Band 40) and FDD-LTE 1800MHz (Band 3) for India. Both the SIMs support 4G, but you can enable 4G only in one SIM at a time, while the other goes to 2G. As usual it has Smart Dual SIM feature similar to other latest Samsung Dual SIM smartphones. This automatically forwards calls from the phone number on SIM 2, even if a user is on the phone with SIM 1’s number. These were some reports about the signal reception issues in the A Series smartphone due to metal build, but we didn’t face any. 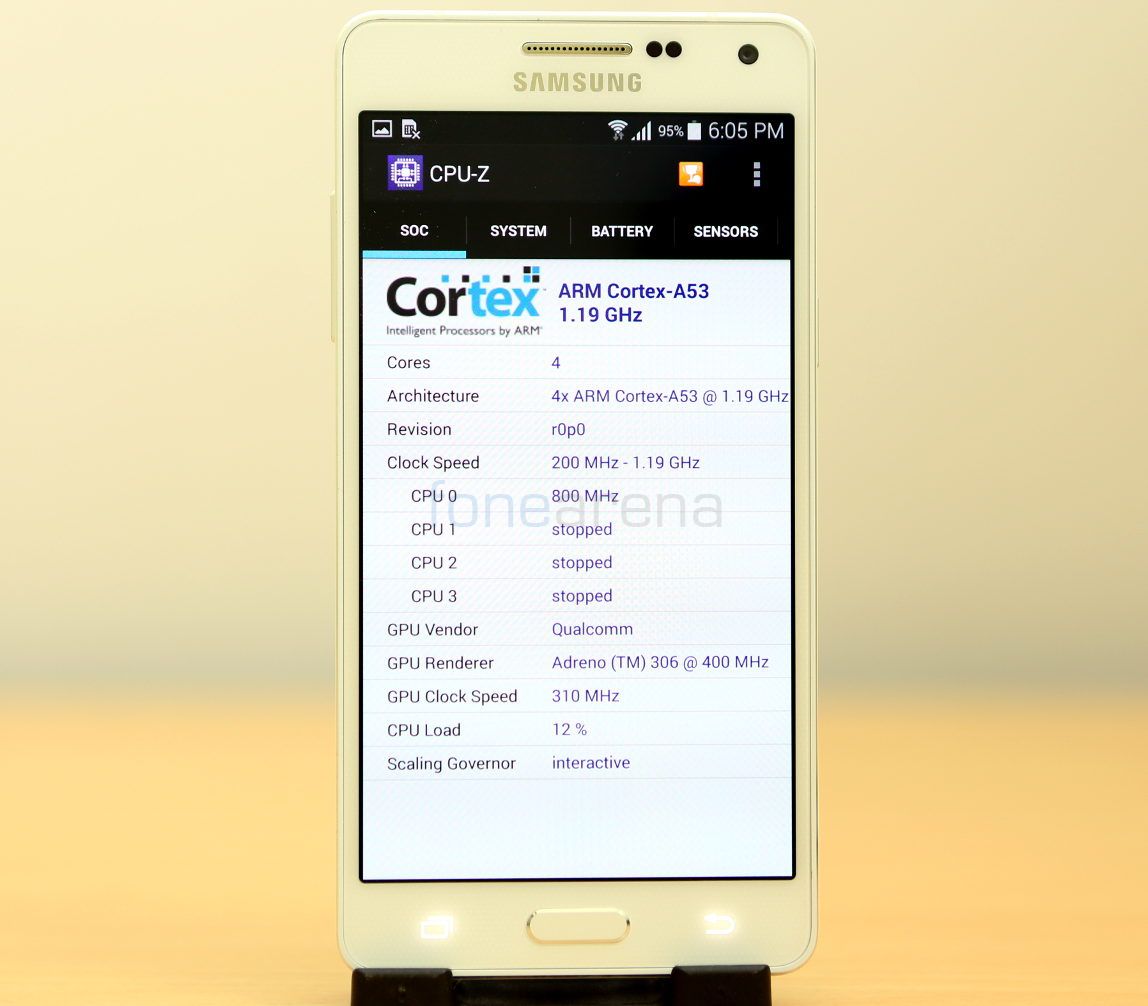 Coming to the performance, the smartphone has a quad-core Snapdragon 410 (MSM8916) 64-bit SoC with four ARM Cortex-A53 CPUs clocked at 1.19 GHz per core, similar to the Galaxy Mega 2. The performance is good, but the TouchWiz UI lags occasionally, so the experience is not completely smooth. However, the 2GB RAM is enough to run several apps in the background, but the TouchWiz UI uses more RAM. Even though it has a metal body it doesn’t get heated on 3G/4G use. Check out some synthetic benchmarks. 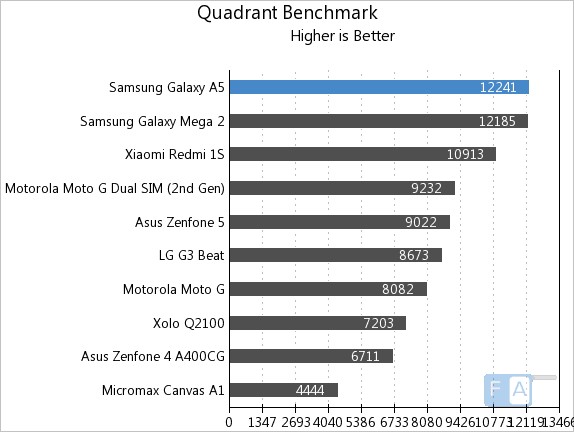 It scored 12241 points and topped the Quadrant Benchmark. 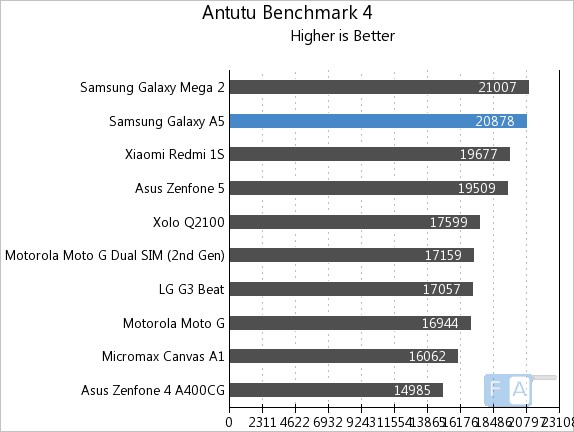 It grabs the second spot, behind the Galaxy Mega 2 by scoring 20878 points in the AnTuTu Benchmark 4 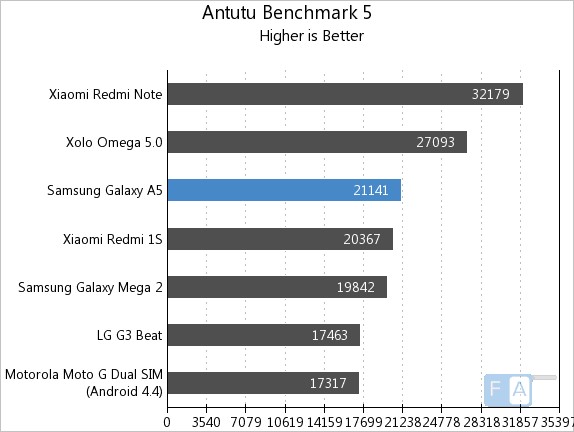 It scored 21141 points in the AnTuTu Benchmark 5 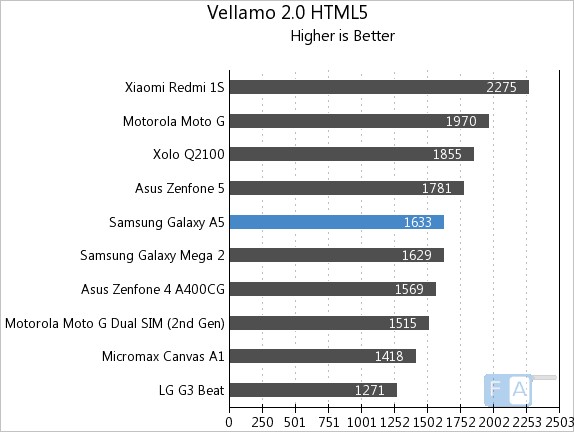 It scored 1633 points in the Vellamo 2 HTML5 browser benchmark. Check out the complete set of Samsung Galaxy A5 benchmarks here.

We tried several games, and some games were not completely smooth, but graphics was good. Is doesn’t support USB or PS3 controllers via USB. It scored 3.5/5 stars in our gaming test. Check out the gaming review to know more about the gaming performance of the smartphone in detail.

Coming to the battery life, the 2300mAh battery lasts for the whole day with average use. With heavy such as 4G LTE with both the SIM cards on use and gaming, the smartphone will last for less than a day on a single charge. The power saving mode and ultra power saving mode lets you extend the battery life to whole day. The built-in battery is a restriction due to the unibody metal build, which is a sacrifice you have to make due to its design. 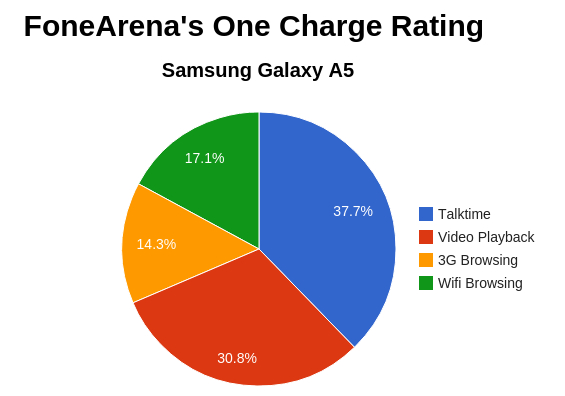 The Samsung Galaxy A5 is definitely one of the best mid-range smartphones mainly for its solid build quality and the stunning Super AMOLED display. Wonder why Samsung took so long to introduce a smartphone with all metal build. At a price tag of Rs. 25,500, the Galaxy A5 is slightly costly compared to some of its competitors that offer a full HD display and some of those who offer smartphones with a faster processor at much less or a similar price tag. But you don’t find any other smartphone with the premium build quality at this price to compete with the Galaxy A5. The Samsung Galaxy A7 that was announced recently has a large, high-resolution display and a faster Snapdragon 615 SoC, which will be even better, but it will definitely cost more when it comes to India. To summarize, here are the pros and cons of the smartphone.