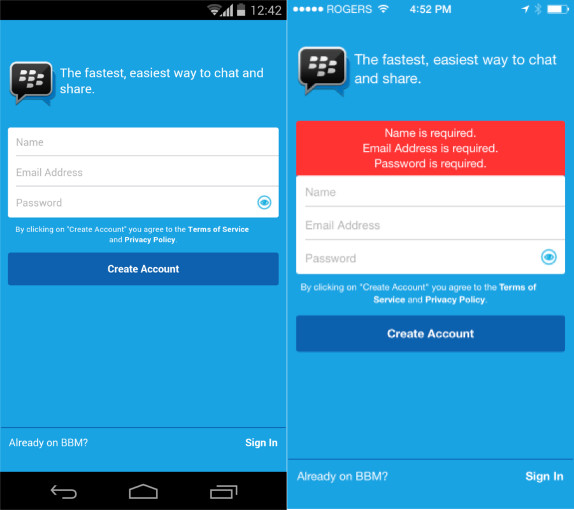 BlackBerry has updated the BlackBerry Messenger (BBM) for Android to version 2.2. This brings new sign up screen and new sign in screen for new and existing users respectively. The new sign up screen now has limited number of fields. You just need to give your name, email and a password. This update also adds option to invite a user via email. You can just accept the contact by opening the email.

This also adds 16 new emoticons.  The ‘Updates’ tab has been renamed to ‘Feeds’. This would represent what you find there – the latest statuses and profile photos from your BBM contacts and the newest posts from the BBM Channels you follow, says BlackBerry. Last month’s BBM 2.1 update for BlackBerry, Android and iPhone brought BBM Shop, option to send larger files and more.

New features in BBM 2.2 for Android

The new BBM 2.2 for Android is now available through Google Play. The update would be available for iPhone users in coming days. BlackBerry also promises a new update for BlackBerry 10 users in a couple of weeks that would bring new features.