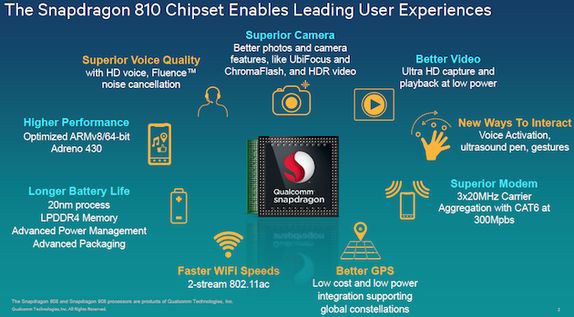 Qualcomm Snapdragon 810 and Snapdragon 808 are both 64 bit processors, but are not the company’s first 64bit SoCs.Among the two, Snapdragon 810 is the higher end version and aims to power the 2015 flagship devices while the Snapdragon 808 is slightly lower powered and aims to appease the mid-range smartphones. Both the chips will be manufactured by the 20nm processor and hence, Qualcomm claims that they will be lighter, smaller and consume less power.

The Snapdragon 810 is an octa-core processor that uses four powerful Cortex A57 cores for intensive tasks and four Cortex A53 for more moderate tasks. In terms of capabilities, Snapdragon 810 will have support for 4K displays, LPDDR4 RAM, dual Image Processors and voice activation. Snapdragon 810 will come with the all new Adreno 430 which is supposed to be 30 percent faster than the Adreno 420(Adreno 420 devices are yet to hit the market). Faster WiFi speeds because of 2-stream multi user MIMO and the Cat 6 LTE-Advanced modem is integrated directly into the chipset. The Qualcomm Snapdragon 810 is shaping up to one beast of a processor. 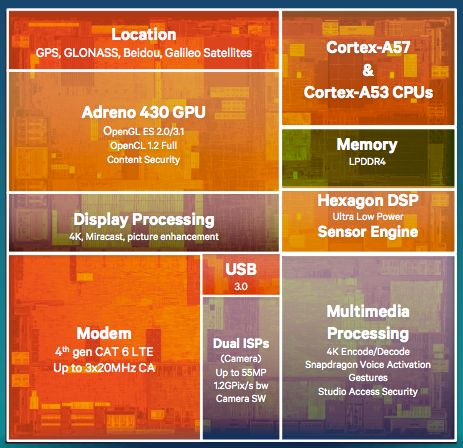 Qualcomm has just revealed the details for its processors and expects sampling to start in the later part of 2014. Devices with Snapdragon 810 and Snapdragon 808 are expected in the first half of 2015.