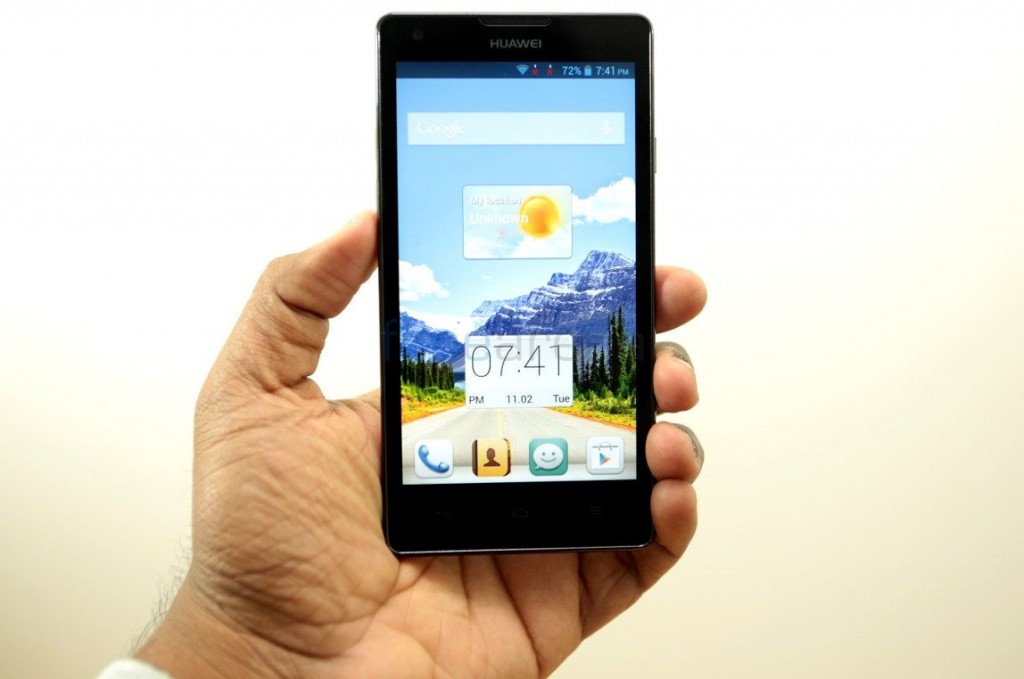 Like most mid-range phones in category, the Huawei Ascend G700 is powered by a 1.2GHz Quad-core processor from MediaTek and has a 5inch HD display. It has the customary 8MP camera on the back along with a 1.3MP front camera. What sets it apart from the otherwise numb spec set is its 2GB RAM. So, is the extra RAM capable of making the phone any better than the competition? Lets check out in the review.

Huawei Ascend G700 is one of those phones that feels a little extra premium and solid for its price range and that is a good thing. In terms of design, the Ascend G700 has a dual-tone finish with a half black and half white color combination giving it a nice monochrome effect. The display and its surrounding are back while the back shell is white. 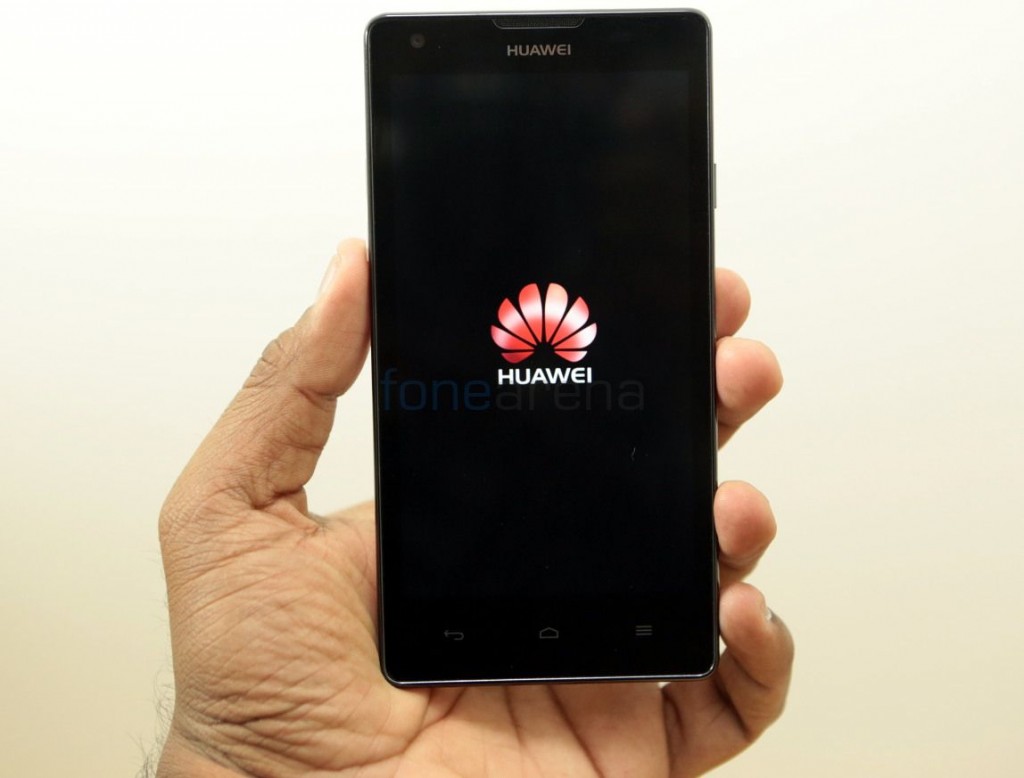 Lets have a quick rundown of the hardware. 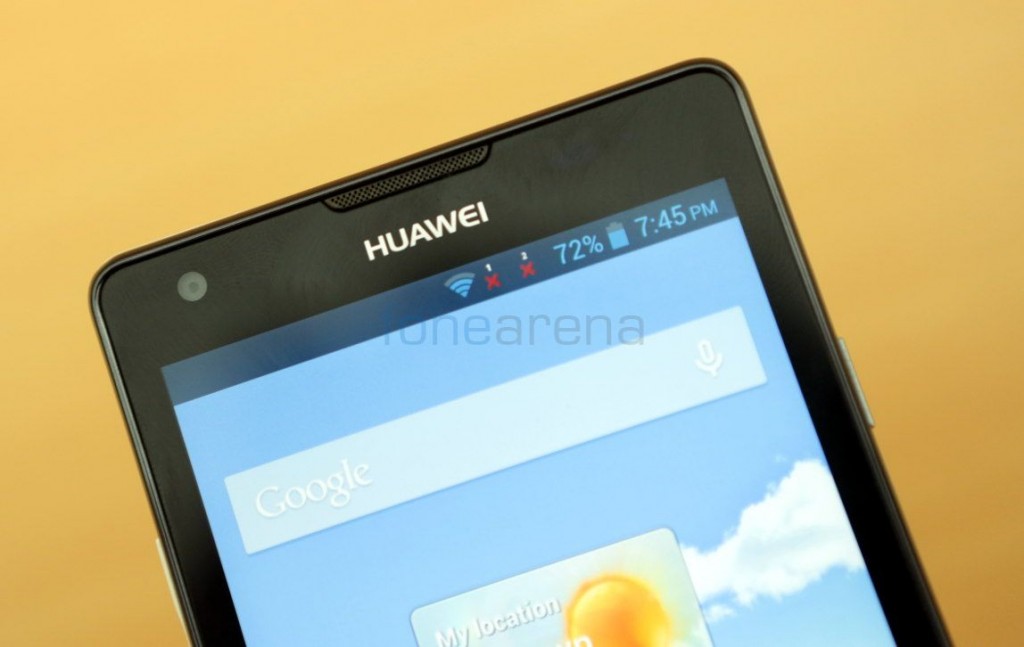 Below the display, we have three capacitive touch keys with the home button at the center. 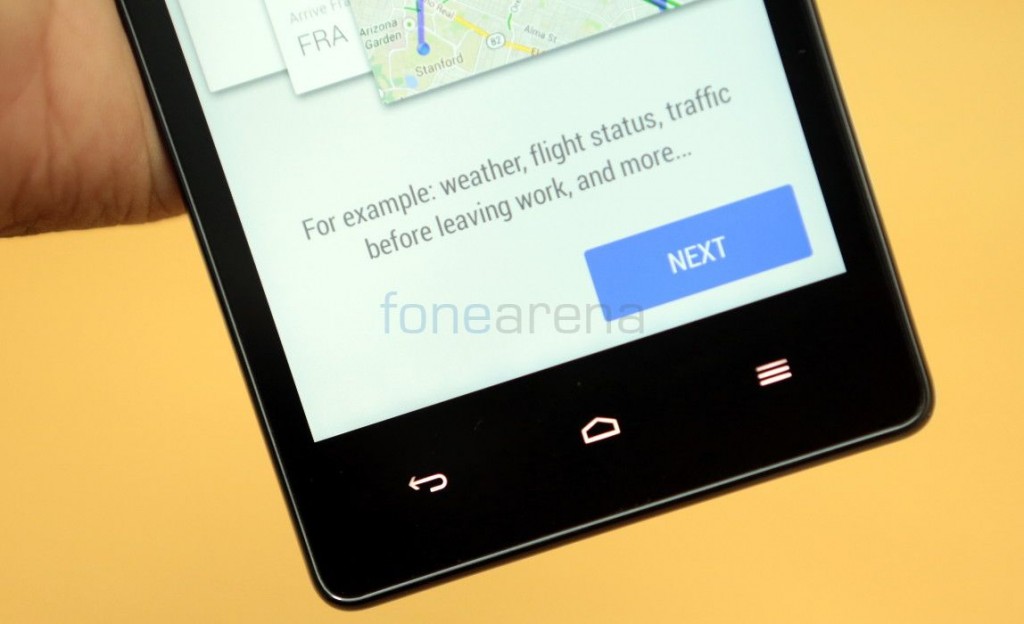 On the right side of the phone, we have a grey power lock button that doesn’t seem to blend in with the other colors. 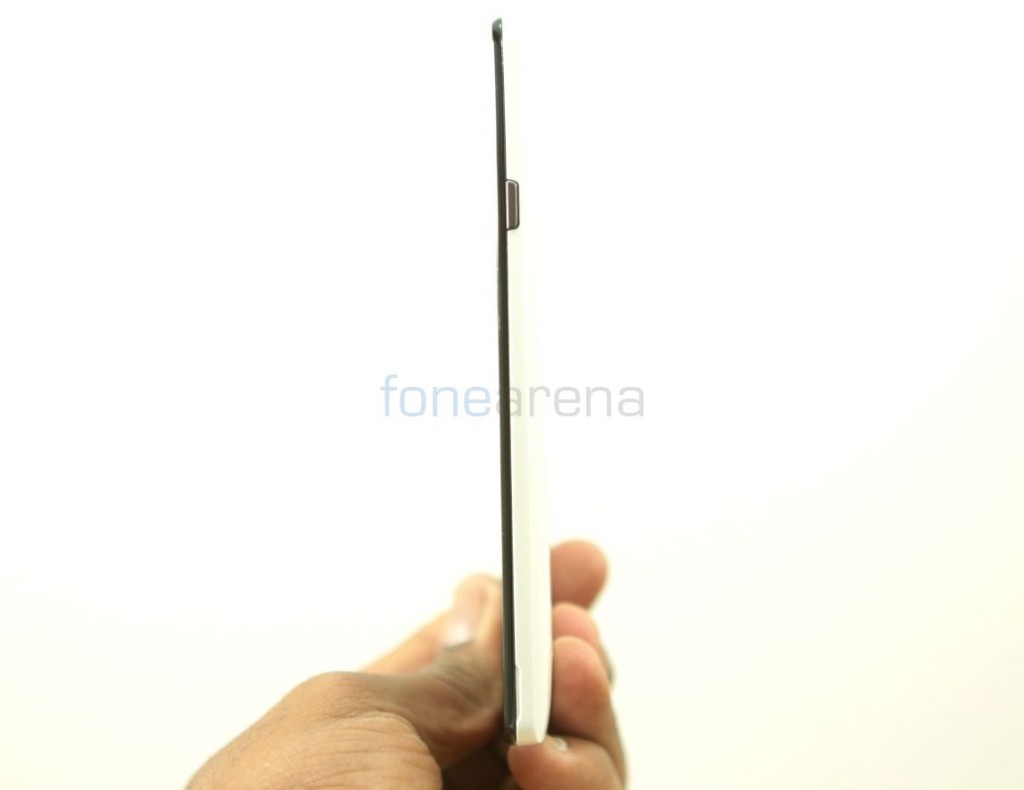 On the bottom, we have the microUSB port at the center and the microphone next to it. 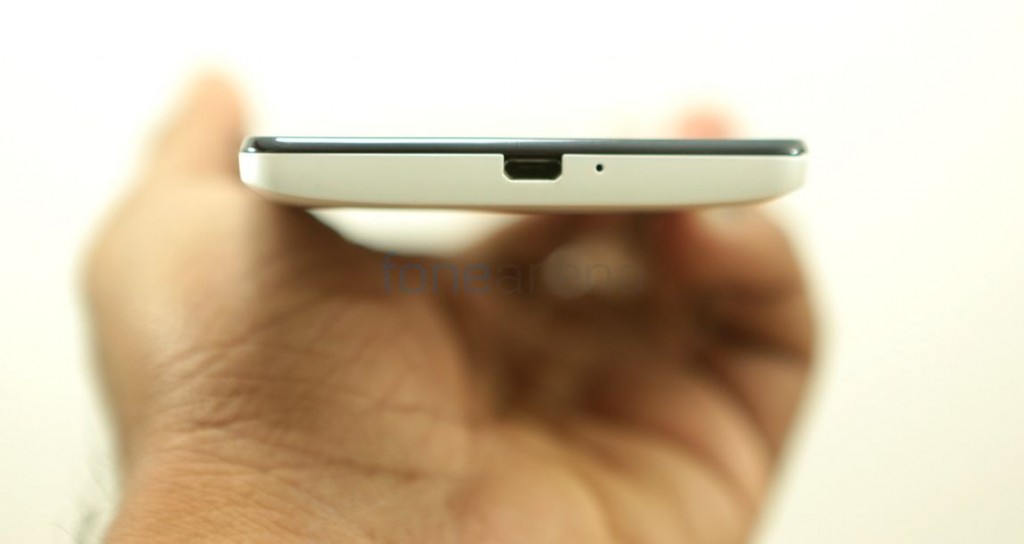 On the left side, we have a white colored volume rocker that blends well with the back shell. Over at the top of the phone, we have just the 3.5mm audio jack. 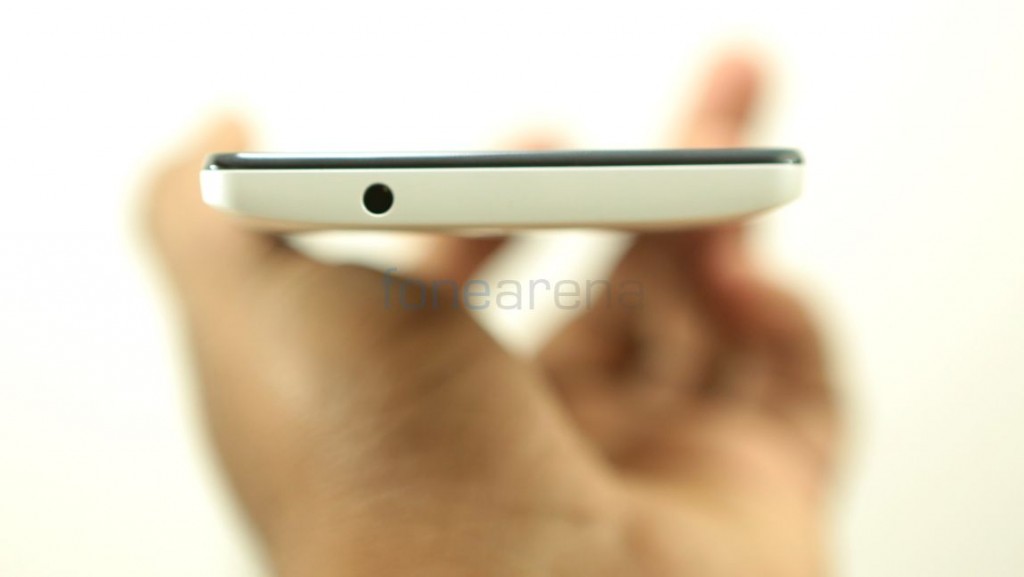 Moving to the back of the phone, we are greeted by a glossy pearl white plastic. At the top center, we have the camera above which there is a secondary microphone and below which we have a single LED flash. Below the camera setup, we have the Huawei loo. Towards the bottom left corner, we have the speaker grill. The back cover is removable and on opening the cover, you get the 2150mAh battery which is user removable. Above the battery compartment, we have two SIM card slots and a microSD card slot between them. 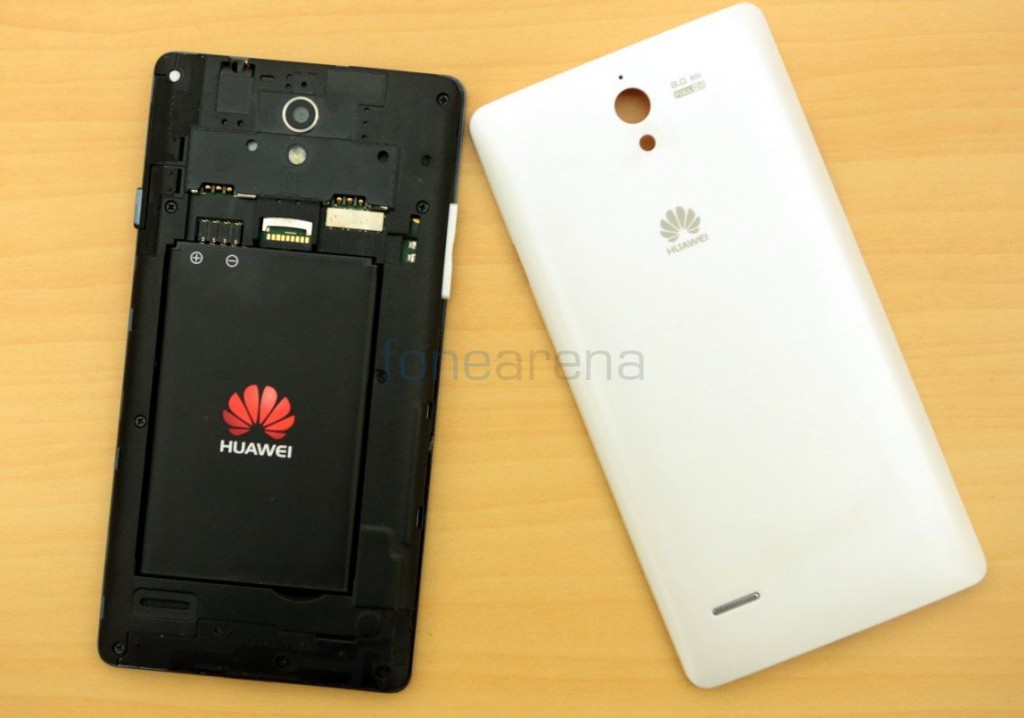 As far as handling is concerned, the phone fits the hand nicely and for people with big hands, one handed usage shouldn’t be much of a problem.

Overall, the build quality of Huawei Ascend G700 is better than most mid-range Android smartphones in its price range. 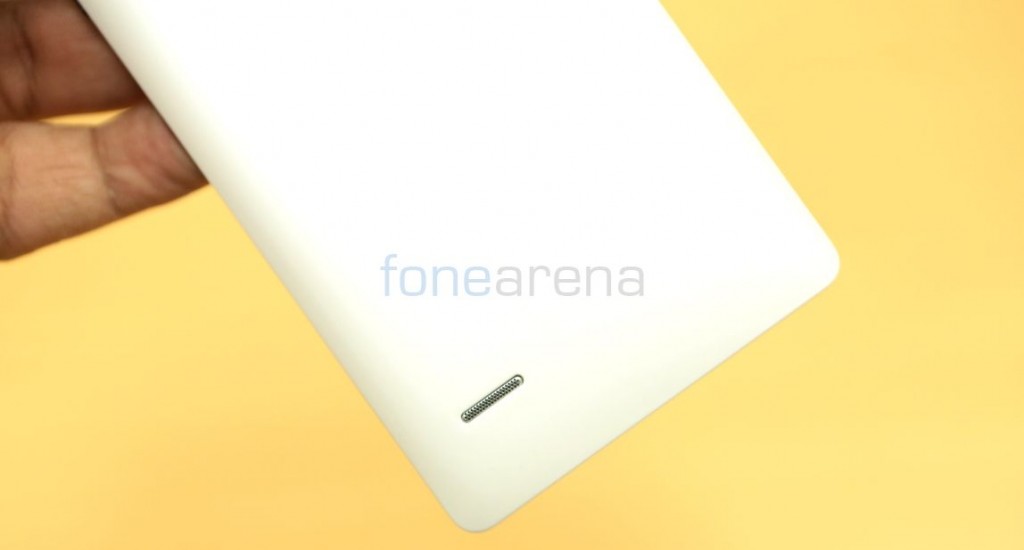 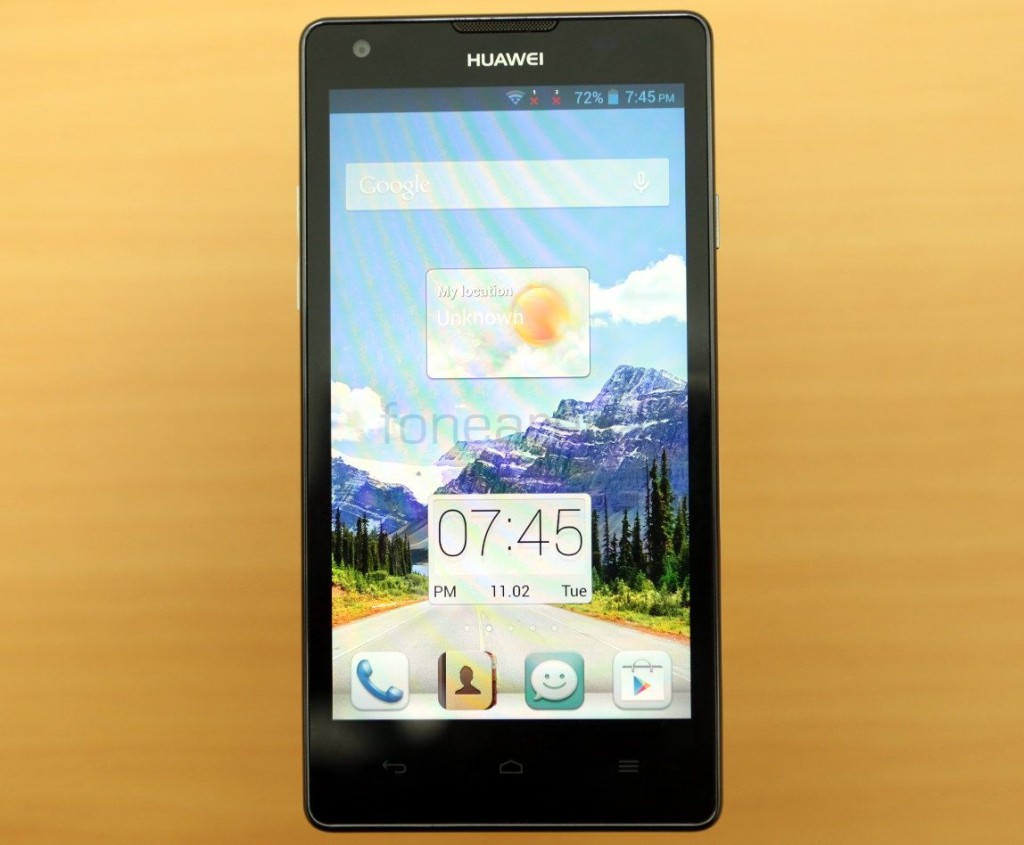 The display on the Ascend G700 is quite good and has true colors. The viewing angles are definitely good and its one of its strength. Being a 5inch 720p HD display, there is very little chance that you will find any pixels with your naked eye unless you look very closely. The display is well above the other phones in the category and definitely a positive for the Ascend G700.

This is the part that we have seen a lot of. Huawei Ascend G700 is powered by a 1.2GHz quad-core processor from MediaTek and it is the very popular MT6589 SoC and it comes along with PowerVT SGX544 GPU. However, what differentiates the Ascend G700 from the other phones in the price range is that it comes with 2GB of RAM. 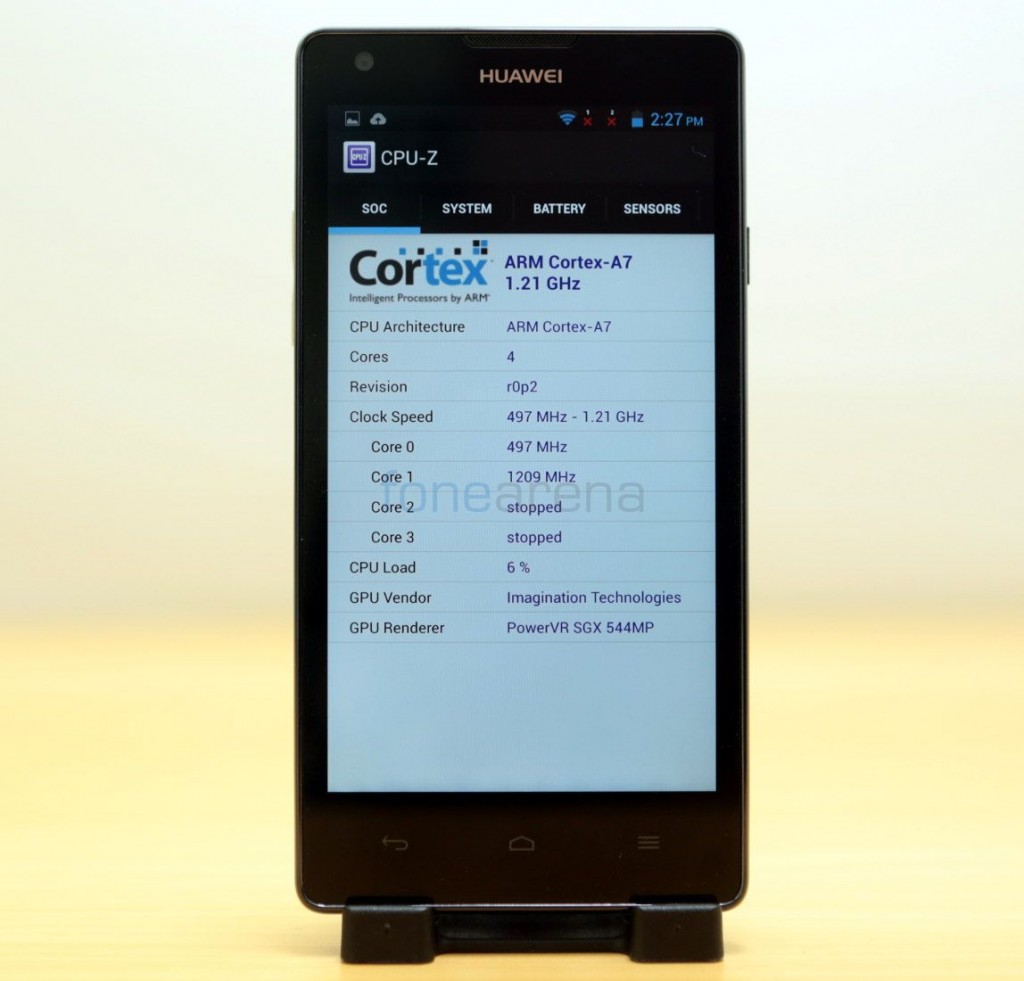 Out of the 2GB RAM, 1.9GB is available for use and when the device is idle, around 1.4GB RAM is available. The 1.4GB RAM should theoretically mean that the performance should be flawless.

In terms of performance, the phone is quite fast and there is very little lag. The extra RAM definitely improves the performance and it is noticeable especially when you open multiple apps and switch between them.

Overall, the Huawei Ascend G700 performs better than its competition in the price range.

We tried out a mixture of high end and low end games in the device. The gaming performance was good most of the times, but when we threw graphics intensive games, the GPU seemed to be troubled and there were frame drops and lags.

You can check out our gaming review video right below. 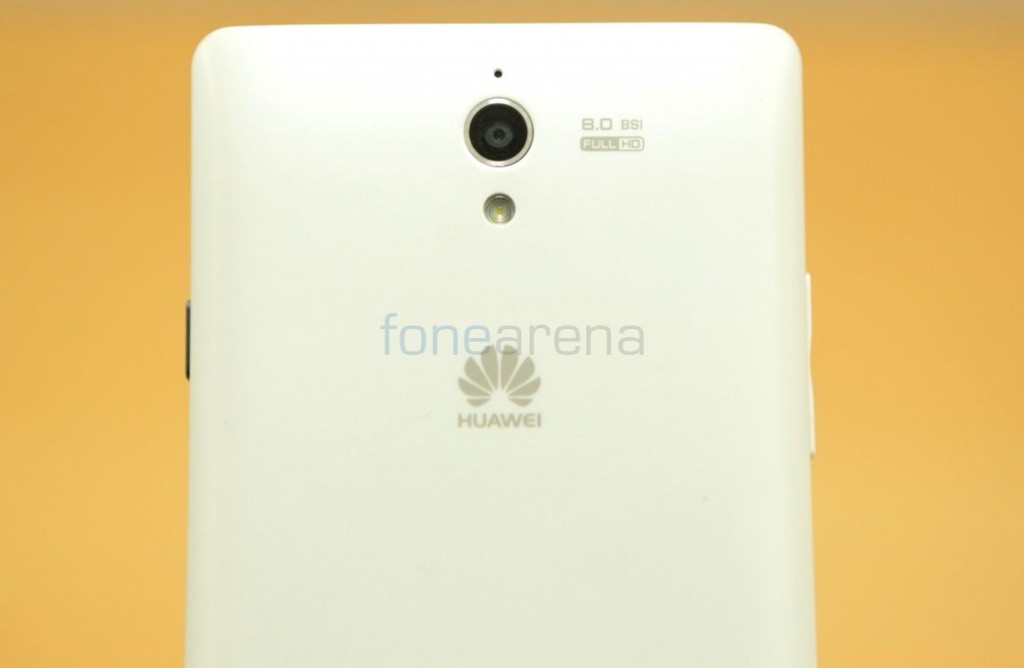 In terms of camera quality, the images are quite good with nice colors and contrast. You can check out the samples right below.

Huawei Ascend G700 runs on Android 4.2.1 Jellybean with a layer of Huawei’s own custom skin – Emotion UI. The custom skin is not everyone’s cup of tea and many would probably be using a third party launcher. With the default Huawei launcher, there is no app drawer(much like iPhone, MIUI ROM) and you get all the icons on home screens. 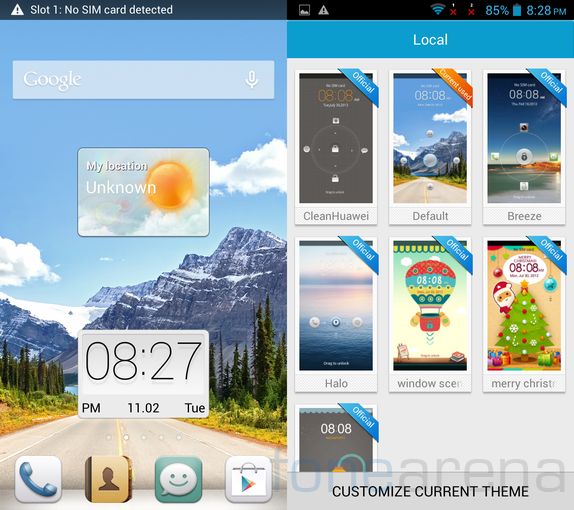 The icons have been changed and many people usually prefer stock icons(you can always download custom launchers and chose your Icon pack). One of the things that I don’t like about the user interface is that the notification bar is white and am not a big fan of a white notification bar. There is no way to change that. There are a few themes that you get with the device and most of the changes are icon changes. 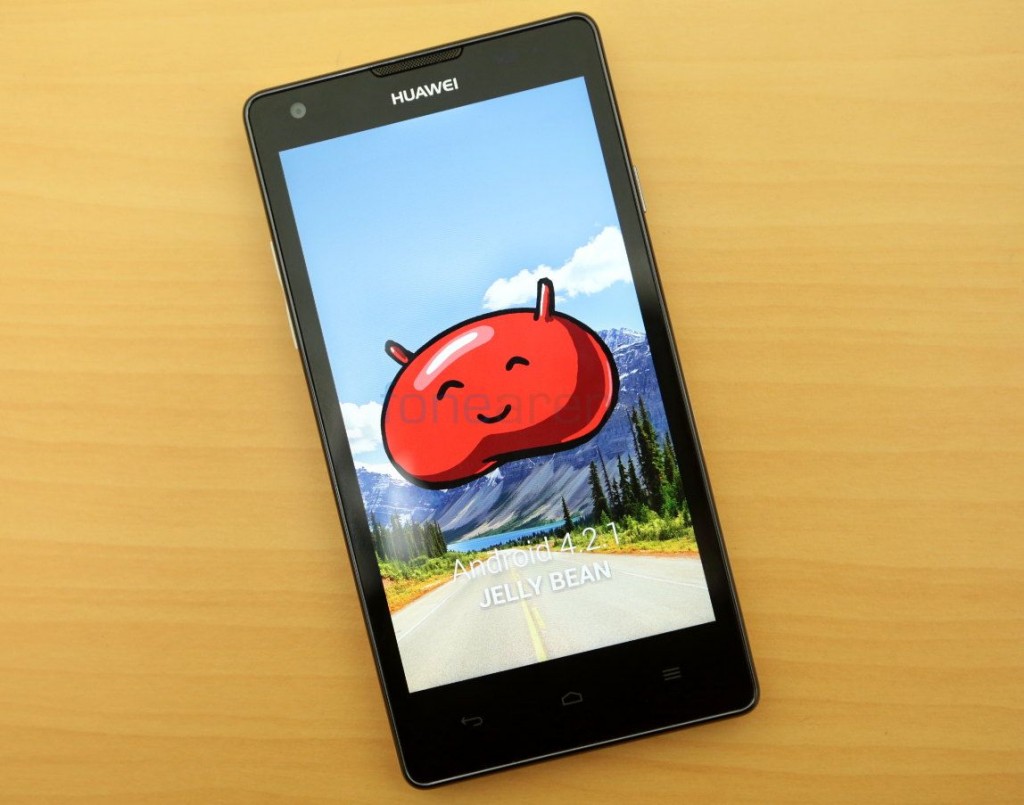 In terms of apps, you get some preloaded apps like – Weather, DLNA, Themes(lets you select themes) and a file manager. A good thing is that there isn’t much bloatware. If you can live with the white notification bar and can use a third party launcher, then software wise, Ascend G700 shouldn’t be a problem. 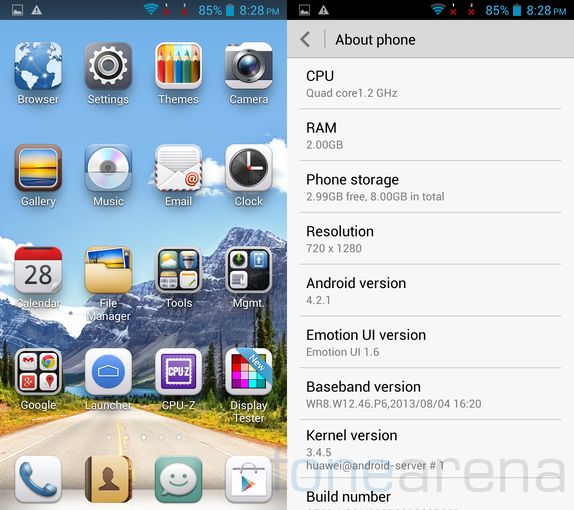 Huawei Ascend G700 comes with dual-SIM connectivity(both are mini SIMs and one slot has 3G support while the other has only 2G support). In terms of other connectivity, it comes with WiFi, Bluetooth, microUSB and GPS. There is no support for wireless display despite running on Android 4.2 Jellybean.

Huawei Ascend G700 comes with a 2150mAh battery that is better than the competitor’s 2000mAh battery. We managed to get a good day’s use out of the battery with heavy to moderate use. If you are a heavy phone user and use two SIMs, then you might want to carry a charger with you. 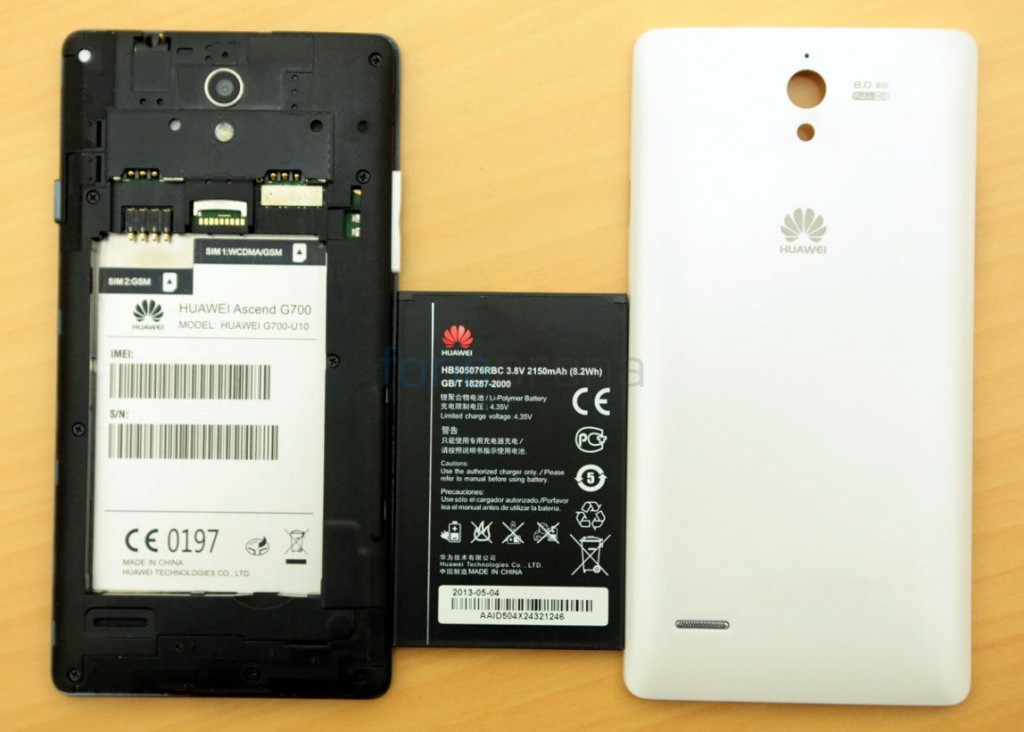 Overall, the Huawei Ascend G700 packs mid-range features in a above mid-range build and delivers a nice experience thanks to the extra RAM. The performance is good, but lacks consistency. The camera is good, but just falls short. That is basically the overall story – the Ascend G700 is good, but not good enough considering its price range and what the competition has to offer. 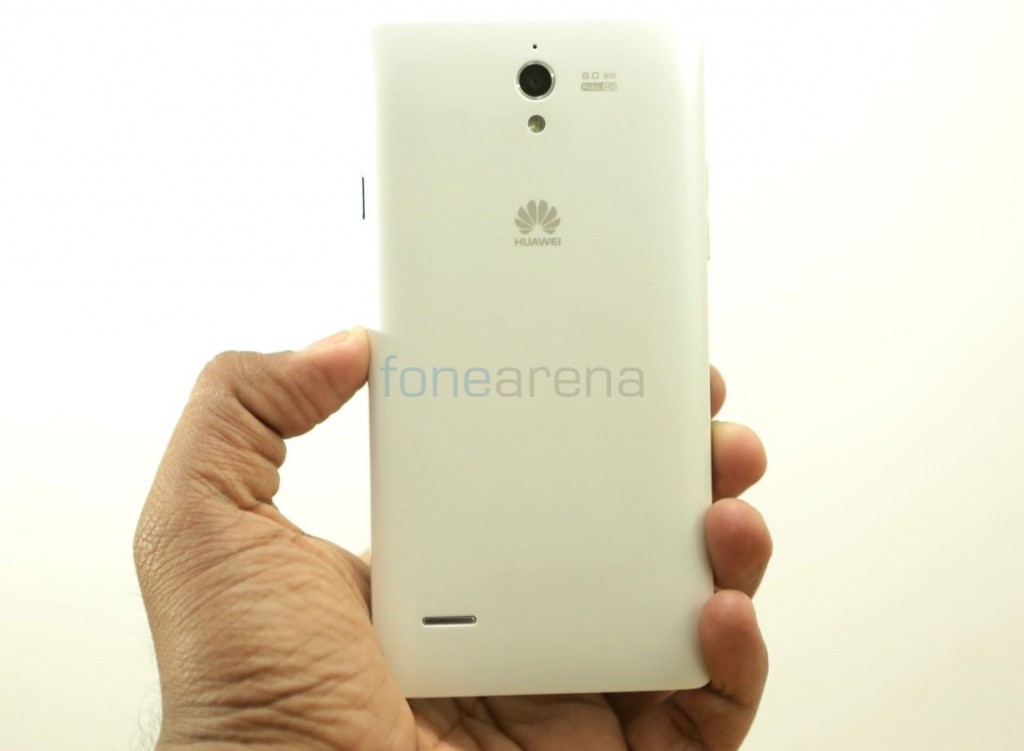