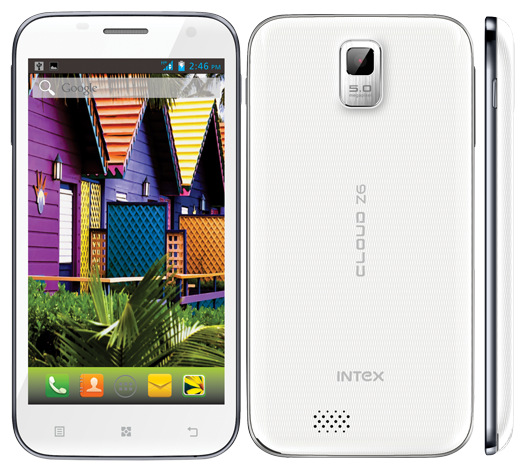 Intex launched the Cloud Z5 in the Cloud Z series back in June, now the Cloud Z6 has surfaced on the official website. It has a 5-inch (480×854 pixels) capacitive touch screen display, powered by a 1 GHz dual-core processor and runs on Android 4.2 (Jelly Bean). It has a 5-megapixel rear camera and a 1.3-megapixel front-facing camera. It has Dual SIM (GSM + GSM) with Dual Standby and comes with 2G (EDGE) support. Other than the display resolution and the software, most of the specifications are similar to its predecessor.

Even though Intex has increased the internal memory from 512MB to 4GB, the rear camera lacks LED flash. It comes with range of pre-loaded apps such as Intex Cloud , Matrabhasha multi-language support, Intex Play,Quikr, NQ vault, Yahoo Panel and more.

The Intex Cloud Z6 comes in White color. No word on pricing or the launch date yet.

[Update: The Intex Cloud Z6 has been priced at Rs. 7690 on the official website.]