For the first time, Apple is hosting two events for the launch of their premium iPhone. The first event is scheduled on September 10th at Apple’s HQ in Cupertino and the second event is planned for Sept 11 in China. According to the rumor-mill, it is believed that Apple will be launching two iPhones this time – iPhone 5S and iPhone 5C. 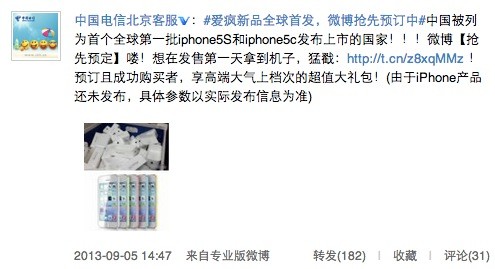 China Telecom seems to have confirmed the release of the iPhone 5S and iPhone 5C. Yesterday, on a micro-blogging site, Chine Telecom’s official account posted that the company is now ready to accept pre-orders for the yet to be announced iPhone 5S/5C. The account also said that China was listed one of the first countries to receive the iPhone 5S/5C. It also shared a mock up pre-order page. Both the pages have now been removed.

China is the second largest market for Apple after USA and things are expected to change soon as China is expected to US because of the sheer volume. Apple has understood this quite well and ever since have been trying to work things out with the Chinese. Usually Apple products come to the Chinese market after nearly two months of availability elsewhere. The iPhone has been expensive until now and is usually out of reach of most people and that could be one of the driving reasons behind the new cheap iPhone 5C.

We will have to wait for Apple to announce everything officially at the September 10th event, till then everything is just speculation.