Each feature in the Smart Camera app is an evolution of respective Scalado capabilities. These features slowly crept into the Lumias after Nokia acquired the company and its talent. Lets go through them one by one. 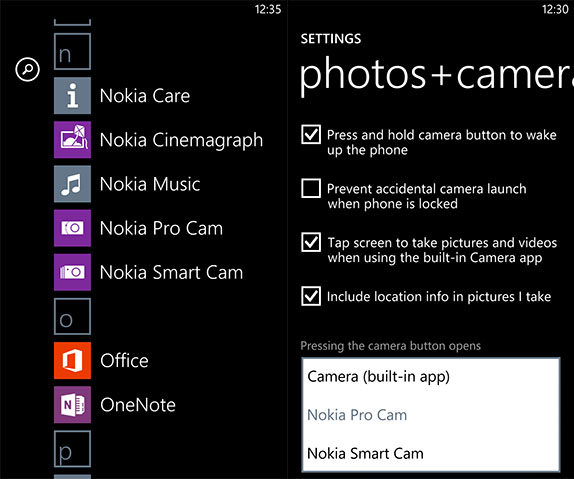 First up, all you have to do is fire up the Smart Camera from the home screen or the app list. It directly takes you to the viewfinder and it’s worth noting that you also have the option to set this to open on default when pressing the camera button. 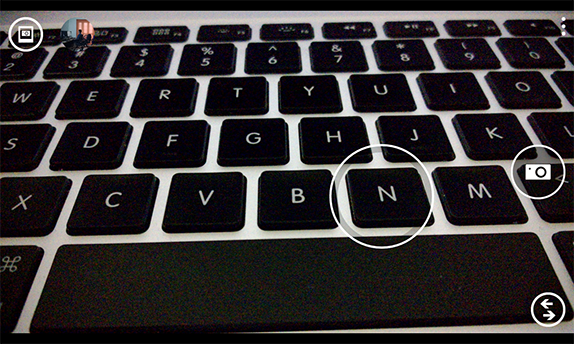 The interface is pretty minimal. You have a big shutter button, a button to switch between the camera lenses, all on the right side and over at the top left you have the access to gallery and a thumbnail of the last image taken. You also have the app bar on the top right which reveals more settings and a handy tutorial among other things like about and feedback for obvious purposes.

Hitting anywhere on the screen locks the exposure and the focus, and once that is set, the shutter button does the rest. Hitting the shutter button actually takes a burst of ten photos(of 5 megapixels in resolution, irrespective of the device used), with which the Scalado technology implements its tricks. Opening up the last taken photo using the smart camera reveals several cards with previews.

First one is the “Best shot”, which takes the ten pictures and selects the best out of them using its own algorithm. It usually works well, but you can always enter into the selection and manually choose the picture you want. Next up you have “Action Shot” which merges various frames of a moving object in a single picture to provide interesting results. For example, I took a picture of my nephew running on rocks and got this result –

As you can see, the other images taken in the burst mode also play a part in this creation. In the editing mode, you can manually select or deselect individual frames from each picture or even add a nice fade effect to all the frames except one. This works great and here is a faded example straight from Nokia.

Next up is Motion Focus. Yes, the name is pretty self explanatory, but to explain it a little more, lets take a camera lesson. You might have seen various shots of cars and bikes in auto magazines that have a linear blur added to their backgrounds. That is made possible using a very hard technique, exactly which the Smart Camera app tries to mimic. In a swift movement along with the vehicle, with the shutter speed open for a longer time, DSLR photographers have long perfected the art of motion blur focus, but thankfully an easier solution is available on phones.

The app works with the same ten burst images and works out the best possible position for the main moving object by adding linear blur to the whole of its background. Here is a sample image we took of a car and a few moving objects –

Pretty nice results, right? It almost looks believable except for some aberrations due to other vehicles that actually move in the opposite direction. The algorithm is unfortunately not brilliant enough to know that opposite movement needs to be blurred, but hey, may be Nokia will read this and fix it.

Moving on, the next feature of the smart camera is “Change faces” which you might have already seen a ton of times with the earlier Smart Shoot app and even other implementations on devices from HTC, Samsung and even BlackBerry. This feature is actually very dear to Scalado and was touted as one of the highlights in their early days. It is basically a simple act of changing faces of people in a group shot so that blinks, weird faces and unfortunate goof ups can be prevented, So, it is pretty standard that all the group shots taken using the Smart Camera will turn out really well.

But changing faces alone sometimes is not enough because people sometimes resort to hilarious stuff like photobombing. How do you remove them? Or how do you remove an unsuspecting tourist walks into your picture in busy outdoors? That’s the next feature in Smart Camera called as “Remove moving objects”. It simply removes any moving object, or at least try to totally remove them, as much as possible. This feature is also yet another really famous Scalado feature called the “Remove” which was initially demoed on Android devices. You can see the same motion focus photo above devoid of most moving objects in this photo here –

All said, if you still aren’t familiar with the Smart Camera app, here is a video demo of the same –

And that’s it for the demo of Smart Camera and its features, but as you saw from the video above, we also demoed you another app called the Cinemagraph. This is possibly one of the most famous photo apps Nokia released for the Lumia range of devices. Giving you the ability to selectively animate a motion image, Cinemagraph creates some interesting images.

While roaming around in my Indian kitchen, I had the opportunity to create two GIFs with selective animation, check them out. (Since the images are too big for the blog, I have embedded the direct links)

As you can see above, one part is moving while the other parts of the image are static. This is possible because the app notices motion and lets you select the parts manually. The second one has just the small movement of a flame, which makes the image even more interesting imo. Almost Harry Potter newspaper levels of awesome here. Clicking on the viewfinder takes a small video and turns it into a looping GIF and it is available for almost all the Lumia devices, including the WP7 ones. The Nokia Smart camera on the other hand will be made available for all Windows Phone 8 device running the latest Amber update.

And that’s about it guys. That was a quick demo of the Nokia Smart Camera and Cinemagraph on the Nokia Lumia 925. We are having more Lumia 925 coverage lined up, so keep checking back and stay tuned for more.