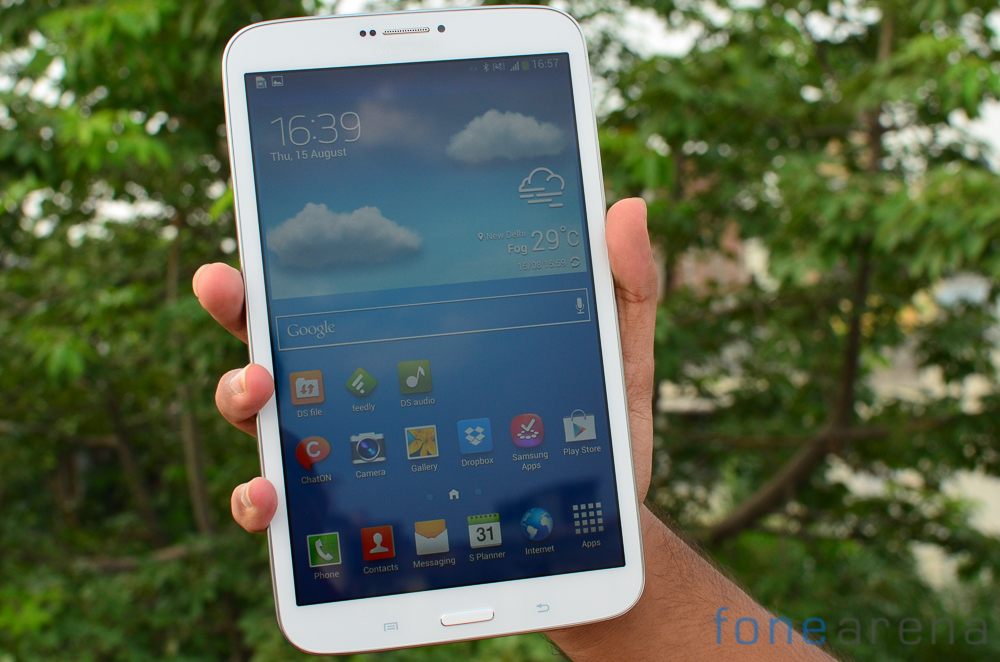 Samsung’s Galaxy Tab range of products have been immensely popular due to their successful marriage of price and specifications. While Samsung’s 7 inch tablet has been the highlight, 8 inches is fast becoming the sweet spot in terms of screen size. With that in mind, Samsung introduced their 8 inch tablet, the Galaxy Tab 3 311 in India sometime back. We’ve already brought you our first impressions. Check out the complete review of the Samsug Galaxy Tab 311, below. 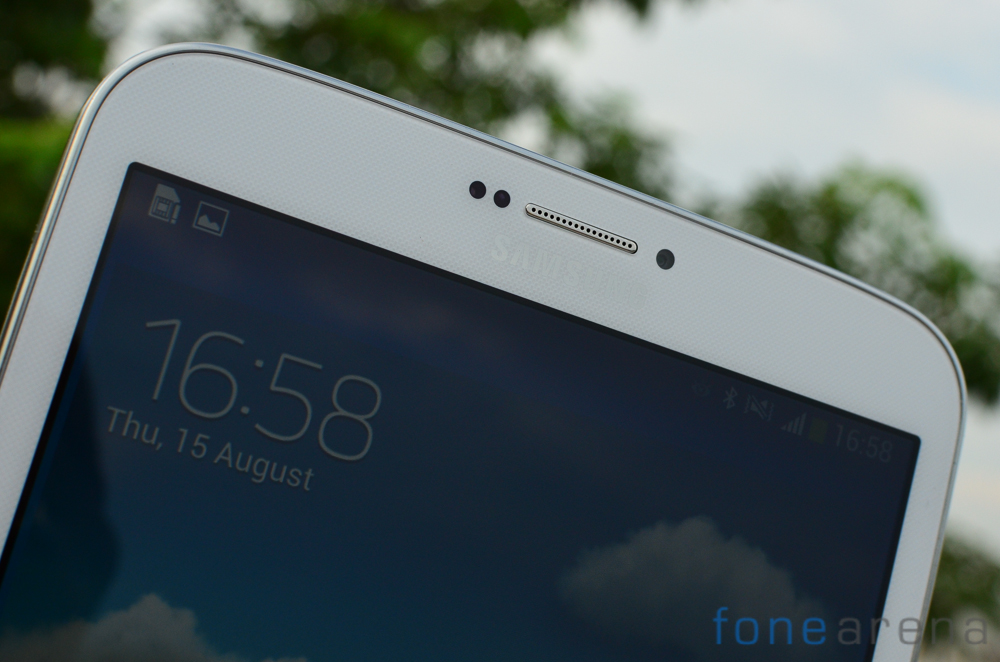 The front of the tablet is dominated by the large 8inch IPS LCD display. Above the display you’ll find the earpiece, 1.3 megapixel front facing camera and proximity sensors. Samsung has done an admirable job at keeping the bezels to a minimum. While this has helped to bring down the size of the tablet and looks very good, some users might find it hard to actually hold up the tablet. Given the light weight of the tablet, we found holding it up at the bottom to be the best solution. The lower half of the tablet below the display has a single hardware button in the center that acts as a home key. Long pressing it activates the multitasking switcher. Flanking it on either side are the back and menu keys.

Over on the right side of the Tab 311 is the volume rocker and power key. An IR blaster can also be seen here that’ll let you use the tablet as a television remote. The left side houses the micro SIM card and micro SD card slots. A faux aluminum band runs along the rim of the tablet that gives it a premium two tone look. The 3.5mm audio jack is along the top edge of the tablet while the micro USB port lies between two speaker ports along the bottom edge. 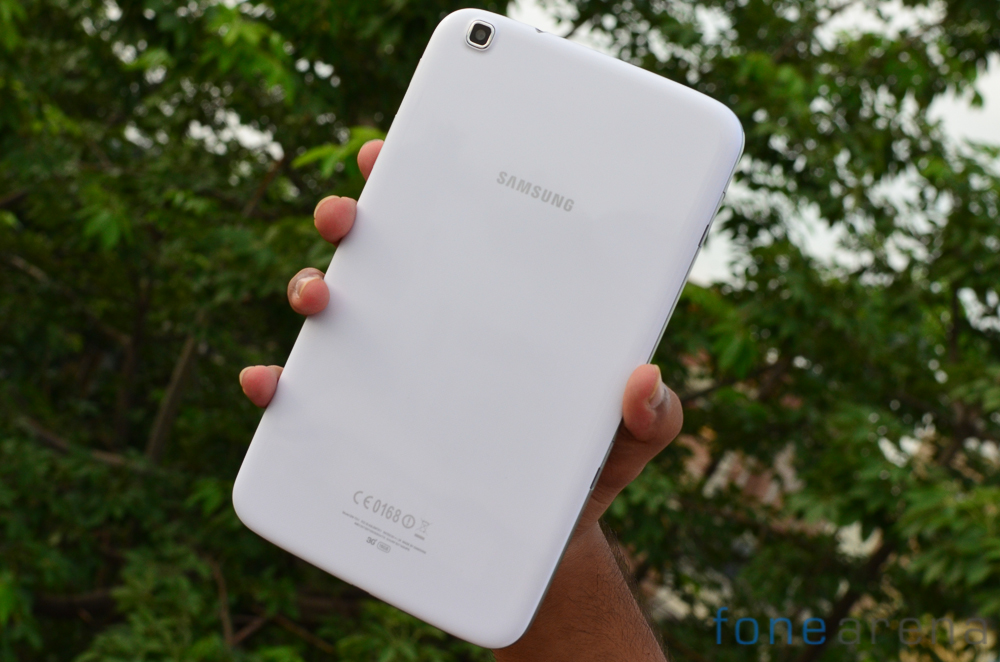 The back of the tablet is made of glossy white plastic. The material has the same hyper glazed finish that we’ve seen on several other Samsung products. The plastic has a pattern built into it which is an interesting design addition. It is major finger print magnet though and manages to feel a bit cheap as well. A 5 megapixel camera can be seen over at the left corner and the tablet lacks an LED flash. Overall the design is utilitarian and falls in line with other Samsung products.

The software onboard the Samsung Galaxy Tab 311 is Android 4.2 Jelly Bean with the Korean company’s TouchWiz UI layer slapped on top. A litany of Samsung specific applications and tweaks can hence be seen here. 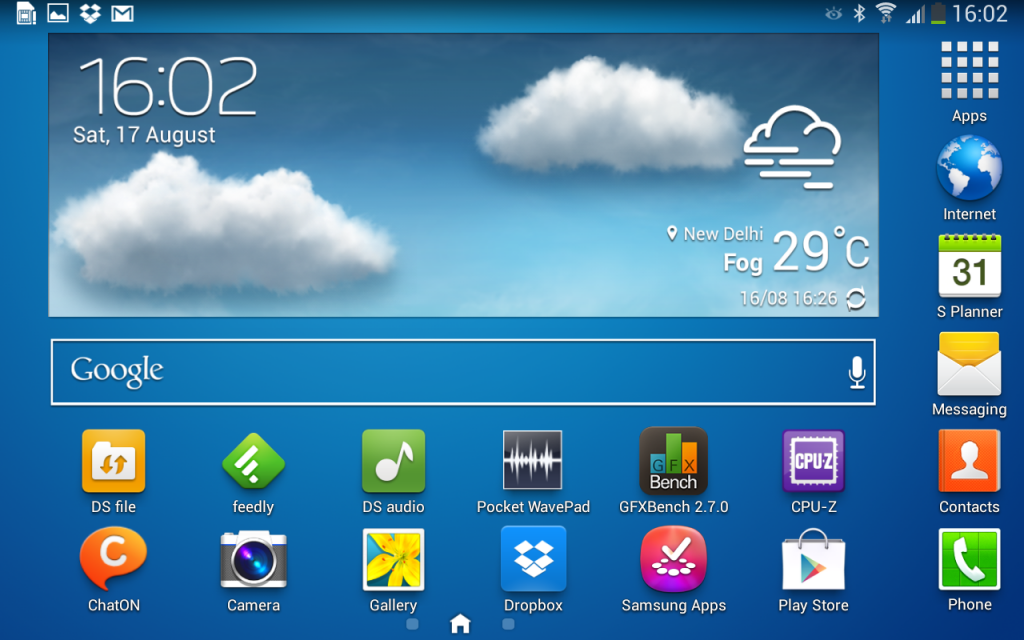 You’ll notice pre installed apps like ChatON, Game Hub, Group Play, S Voice, S Planner, Music Hub, WatchOn, Reader Hub in addition to others like Dropbox and Flipboard preinstalled on the tablet. Samsung has bundled in the Peel Smart Remote app to allow you to control your television via the built in IR blaster. A phone app is also included allowing to use the Tab 311 to make calls like a over sized smartphone. 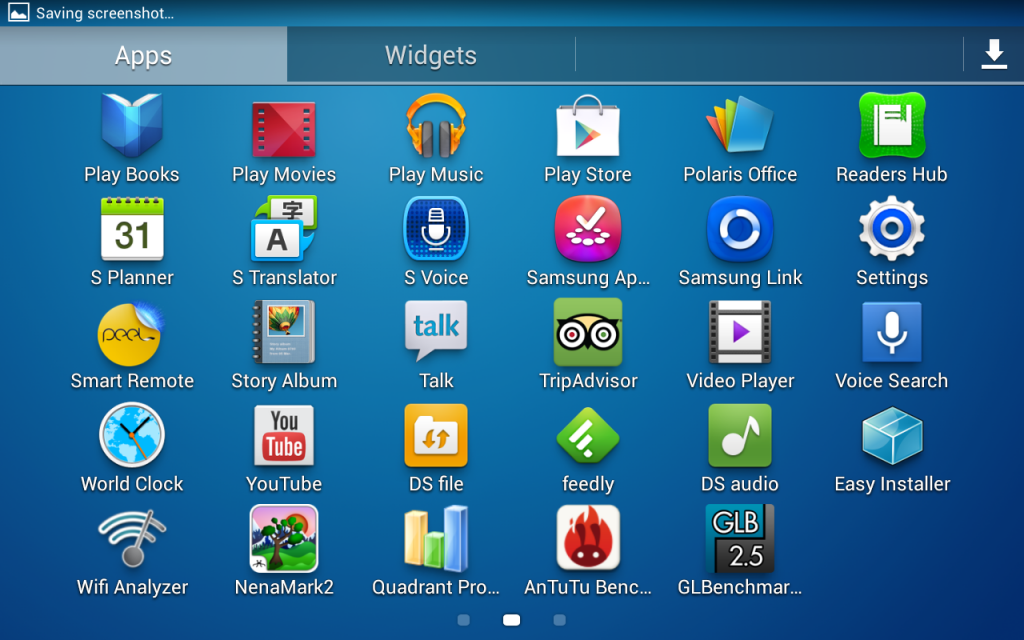 Of the many new features introduced in TouchWiz with the Galaxy S4, Smart Stay tends to be the most relevant The tablet uses the front camera to sense when you are looking away from the screen and will automatically pause video. The feature works well enough in good light. There’s also multi window support which is pretty awesome to have on a screen this size. While it still works only with supported apps, the feature works very well.

The interface is a curious amalgam of tablet and phone centric interface elements. The notification shade drops down to reveal a decidedly smartphone like panel. We maintain that TouchWiz is perhaps one of the more powerful interface layers out there that offers a lot of customization features to the user but still manages to look very unappealing. It is high time that the layer got a fresh coat of paint from the software team at Samsung.

The Galaxy Tab 311 is equipped with an 8 inch WXGA panel. The screen has a resolution of 1280 x 800 which results in a pixel density of 189ppi. While far from the highest resolution, the display is perfectly serviceable. 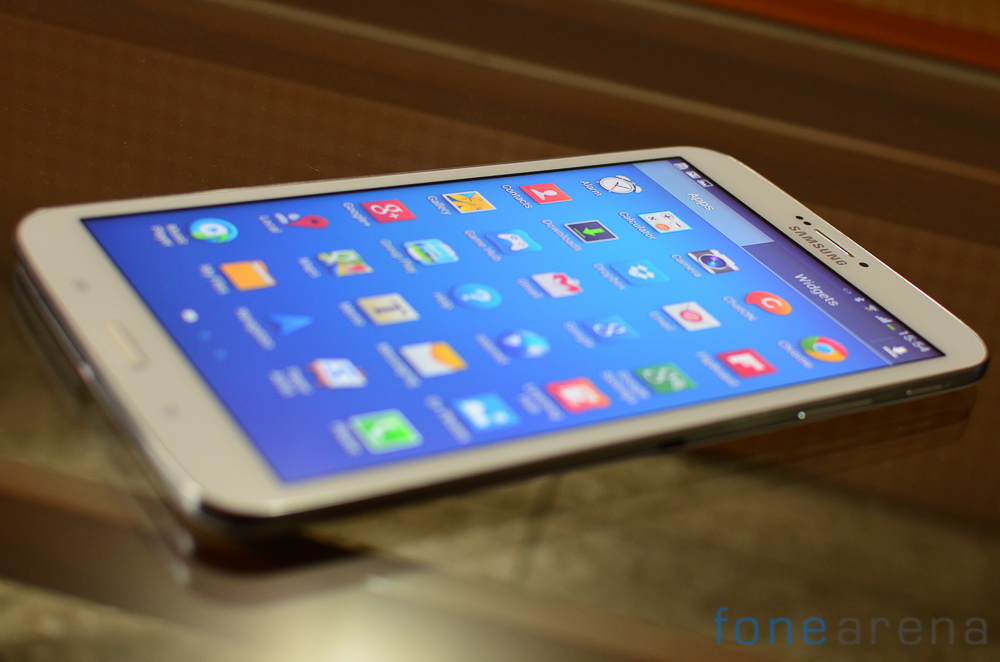 We found to images and text to be reasonably crisp though it was easy to notice blurred edges along text on holding the tablet up close. Viewing angles were excellent and it is possible to view the tablet even in brightly lit areas though the highly reflective display may make it a bit hard. We found colors on the Tab 311’s display to be a bit muted.

Under the hood of the Samsung Galaxy Tab 311 is a 1.5Ghz dual core Exynos 4212 processor that is paired with 1.5GB of RAM. The heavy customization of TouchWiz ensures that only around 442MB of free RAM is available on first boot. We were fairly disappointed to see the relatively hit or miss performance of the tablet. It wasn’t uncommon to see a delay in touch response. On occasion, the tablet would complete freeze and force closes were an extremely common occurrence. In particular, the gallery app causes the tablet to struggle. Running games or heavy duty apps would often cause the tablet to heat up. While the tablet is powerful enough to get the job done, the inconsistent behavior and all these issues add up, leading to a lot of frustration.

Synthetic benchmarks back up our claims with less than average scores in popular tests. 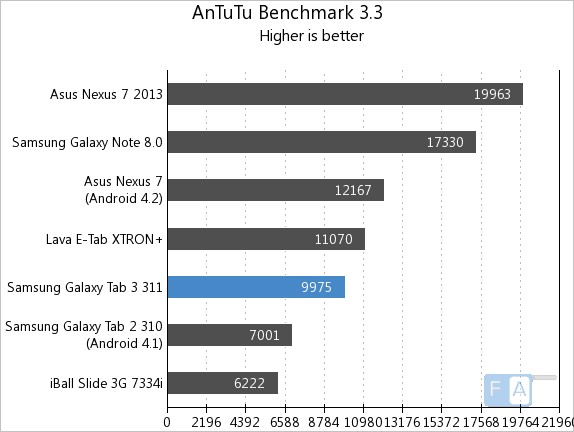 The tablet scored just 9,975 points in AnTuTu which is marginally better than last year’s Galaxy Tab range but is still well below the competition. In particular, the Nexus 7 scores over double here. 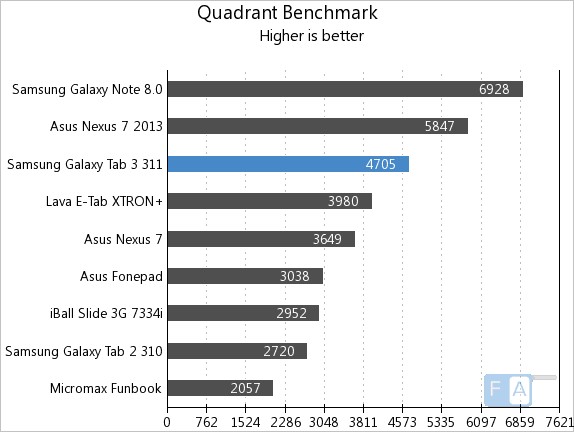 The Quadrant benchmark proves to be interesting wherein the tablet doesn’t do too bad. It is still overshadowed by the Note 8.0 and the Nexus 7 but manages to push ahead of most of the indigenous competition.

We ran our standard multimedia test suite on the tablet and it was able to playback most of the content. Our test audio content includes a range of content across MP3, AAC and FLAC codecs at a multitude of bitrates and the tablet had no issue playing these files. Moving on to video content, 720p videos weren’t a hassle for the tablet though it did struggle a lot with 1080p content and ended up dropping frames. Gaming on the tablet is a decent experience with games like Riptide GP2 looking quite good on the bright screen. Games that push graphics to the extreme do end up dropping frames and there is the issue of the tablet heating up a fair bit.

Check out the Asphalt 7 and AVP:Evolution gameplay on the Samsung Galaxy Tab 3 311.

Here is the complete gaming review 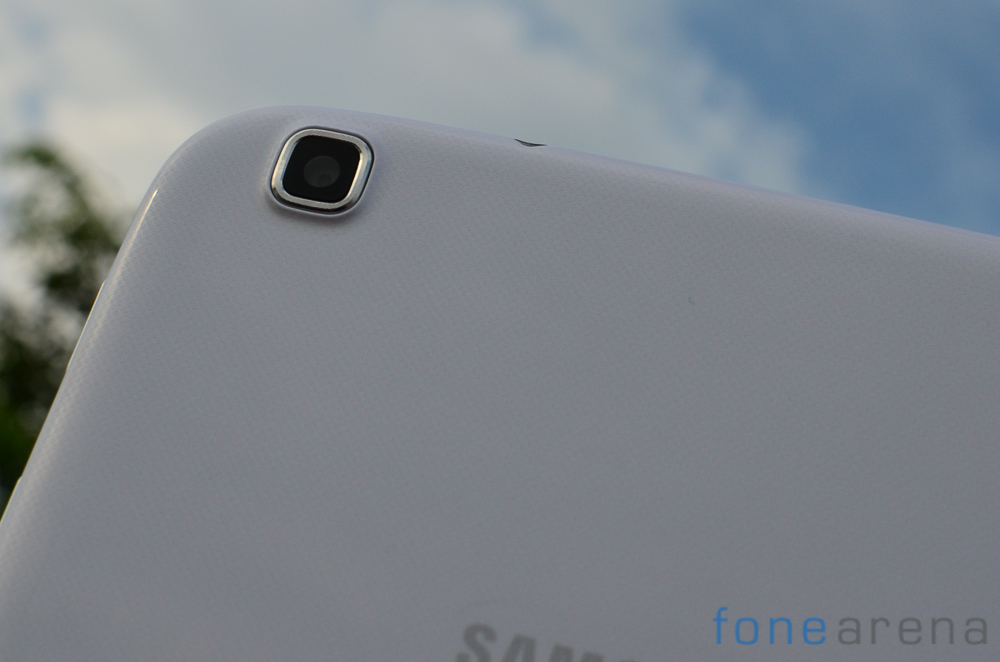 Calling the camera on the Galaxy Tab 311 poor would be an understatement. It is something that you should rely on only when you have absolutely nothing else at your disposal. 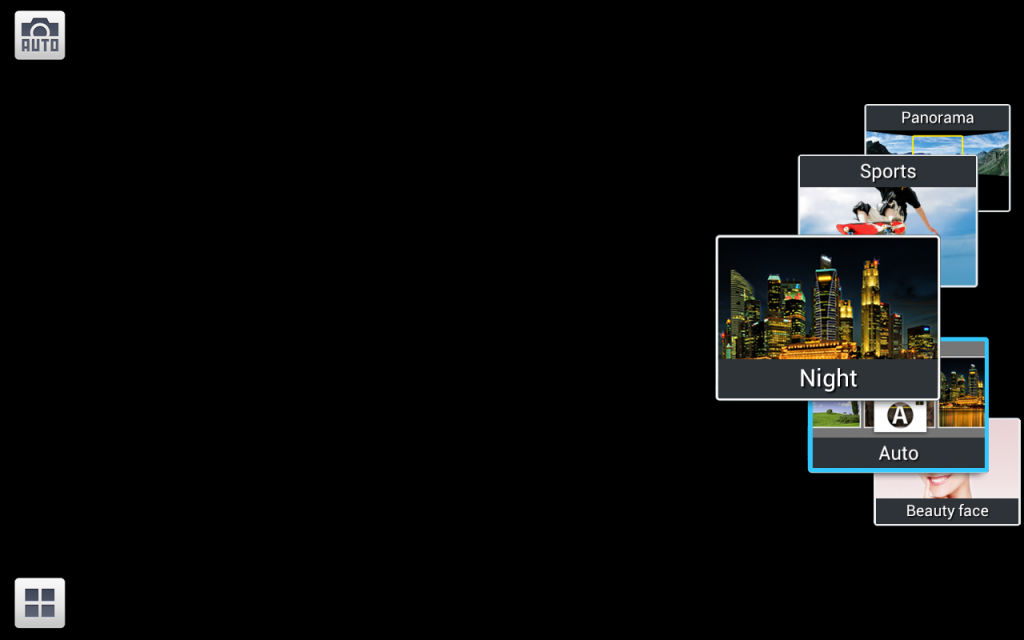 The camera interface is very similar to the one seen on most other Samsung devices. That said, you don’t get the full gamut of features here. Most notable, there is no HDR mode in the camera app on the Galaxy Tab 311. You can however chose from a range of scene modes that might slightly improve the end result depending on the subject, lighting conditions. 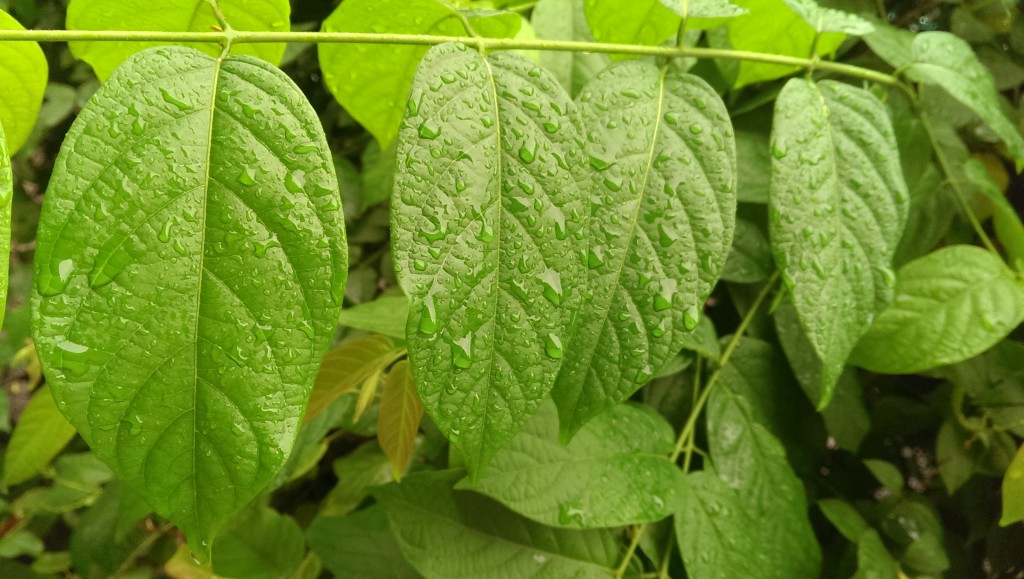 Image quality is generally mediocre with noisy results and washed out colors even in bright day light. We were surprised to see how the camera struggles to take a blur free image even in adequate lighting conditions. The tablet’s camera does an admirable job with close up shots and will do a good job at capturing documents, business cards.

The noise levels predictably shoot up when taking a photo indoors. There is no LED flash here to assist with low light images.

Video recording tops off at 720p resolution and 30FPS. Captured video is smooth and doesn’t suffer from skipped frames. The level of detail captured is also decent.

The Samsung Galaxy Tab 311 comes with 16GB of internal memory and this can be further expanded via the expandable memory card slot by up to 64GB. Of the 16GB of built in storage, Approximately 11.2 GB is available to the user. Connectivity options range from  3G HSPA+ ,WiFi a/b/g/n (2.4/5GHz), WiFi Channel Bonding, WiFi Direct, Bluetooth 4.0 and GPS +  GLONASS. 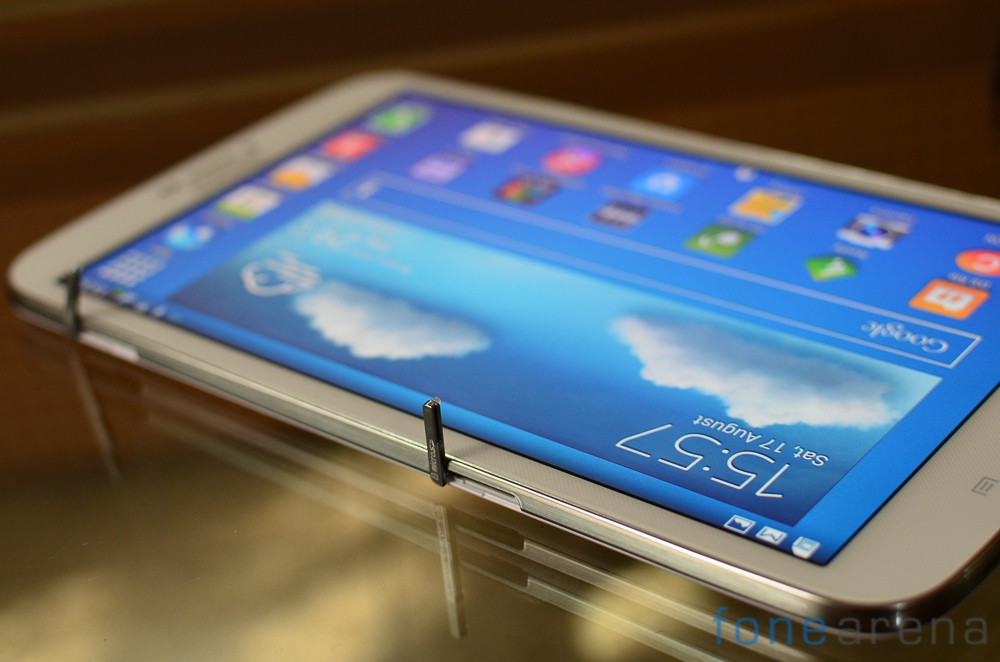 The battery pack powering the silicon here is rated at 4450 mAh.The tablet makes good use of this and manages to last about two days with moderate usage. Extended heavy usage will however put a dent in the autonomy. We were quite satisfied with the battery life of the Galaxy Tab 311 and could easily eke out several hours worth of movie playback time from it.

The Galaxy Tab 311 is in an interesting position wherein it offers a potent mix of performance, portability but it does miss out on the pricing aspect. At Rs. 29,990, the Tab 311 is too expensive to be a legitimate competitor to the budget Android tablets and definitely not the iPad Mini. 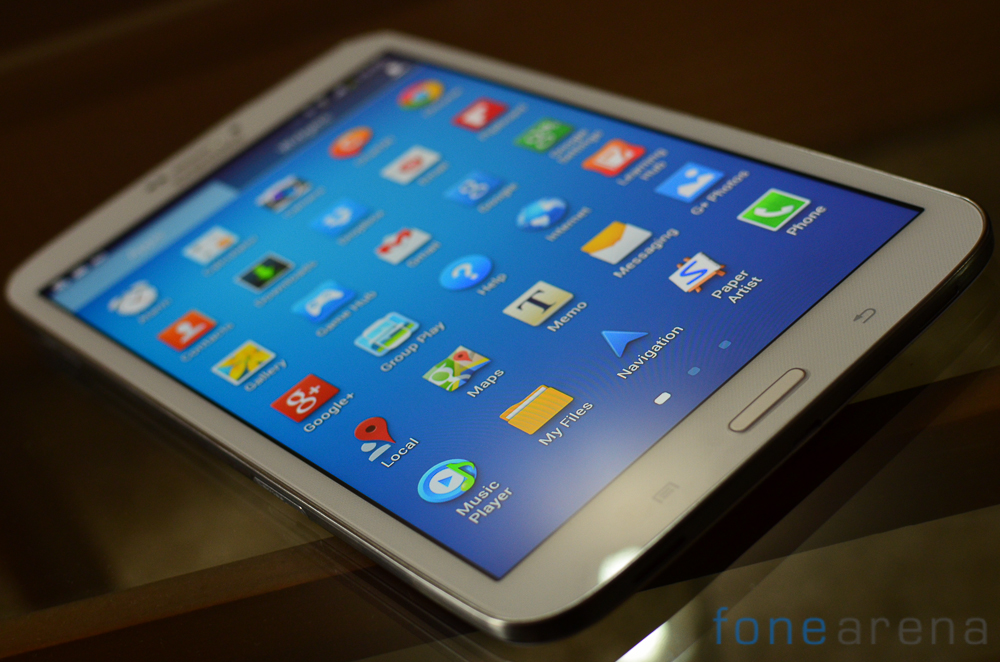 Considering this is one of the few 8 inch Android tablets that are also equipped with 3G, it’s worth taking a look at it if you’re in the market for such a tablet. We would however recommend taking a look at competing devices like the Nexus 7, the Apple iPad mini or even other tablets from Samsung’s portfolio before making your decision