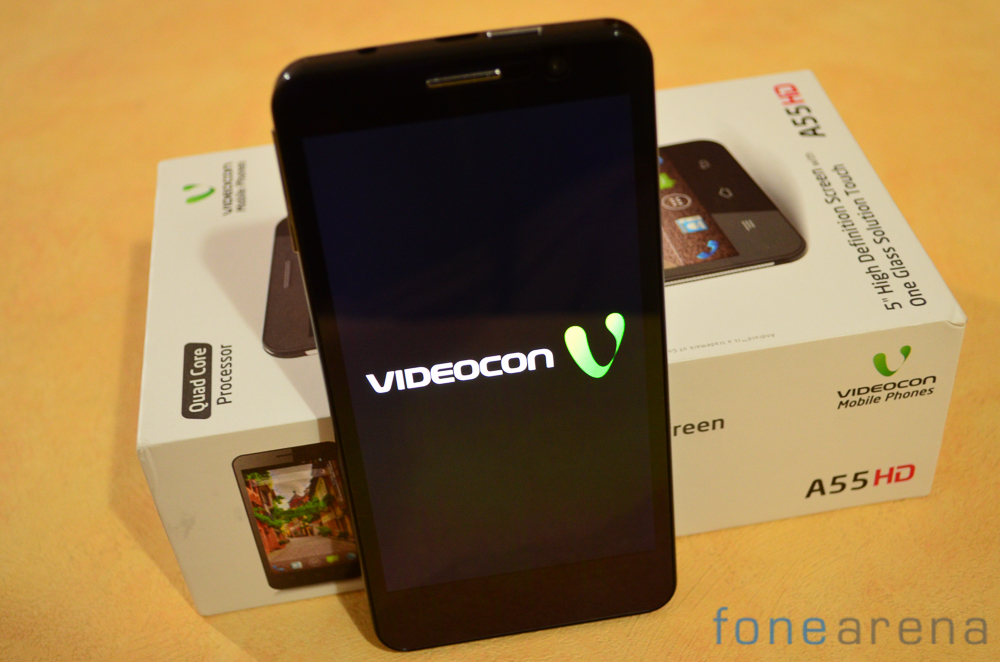 With the rapid proliferation of budget Android devices, everybody is trying to get a slice of the pie. Not to be left behind, Videocon too has launched its latest product called the A55HD. Can the erstwhile leader of consumer electronics in India make a dent in the smartphone segment with the A55HD ? Read on to find out our impressions of the smartphone.

Clad in a glossy plastic material, the Videocon A55HD is a fingerprint magnet. The handset appears like a black slab with the only visible element being the chrome earpiece grille on top and the front facing camera next to it. Tapping the power button activates the display that otherwise remains almost invisible. 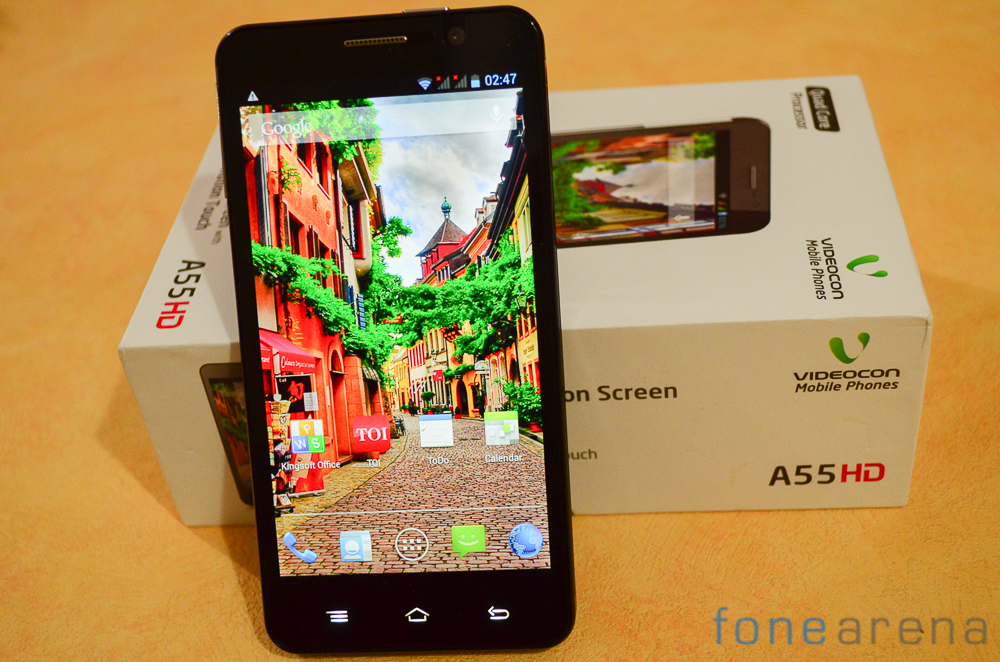 The piano black finish of the product is broken by the chrome strips with mesh like patterns running on the side of the phone. The left side of the phone has the volume rocker while the right side does not sport any buttons. 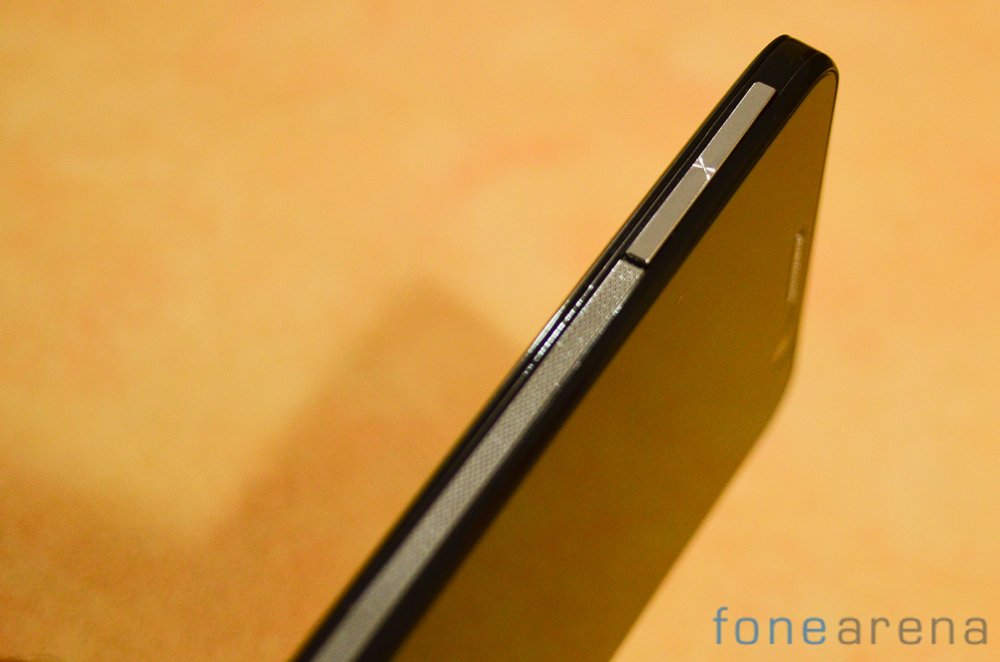 Unfortunately Videocon has opted to place the power key on the top of the handset which makes it a stretch to reach. We’d have definitely preferred to see the power button placed on the side of the phone. Next to the power button lies the microUSB slot and the 3.5mm audio jack. 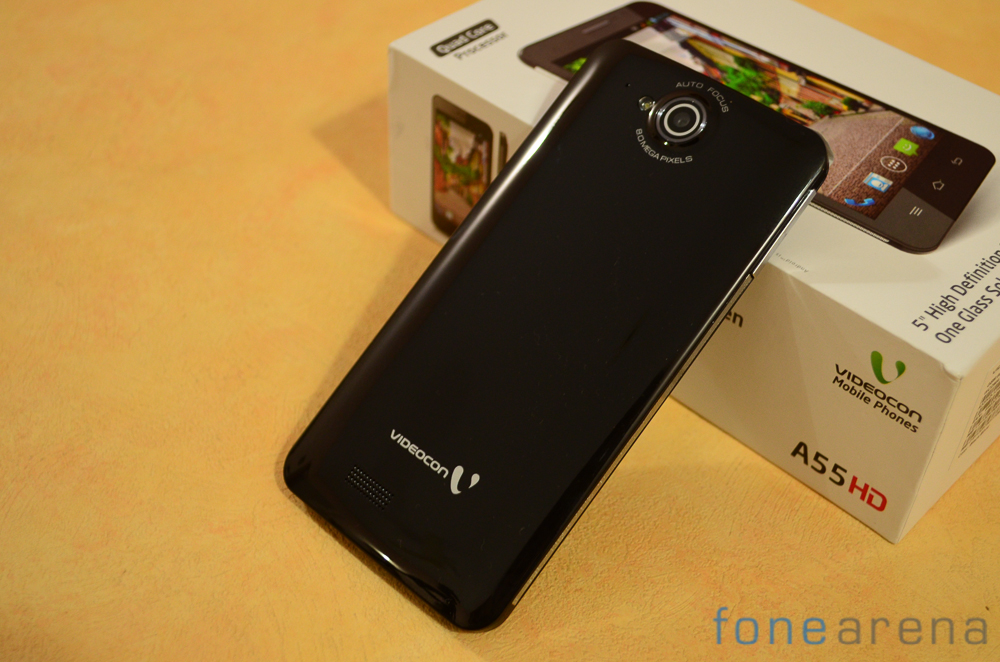 The high gloss piano black finish continues to the back of the handset where you can spot a Videocon logo at the bottom. Below it is also a speaker grille that is placed slightly off center. The 8MP camera unit protrudes outside the shell and is prone to scratches. Next to it on the left side is the single LED flash. 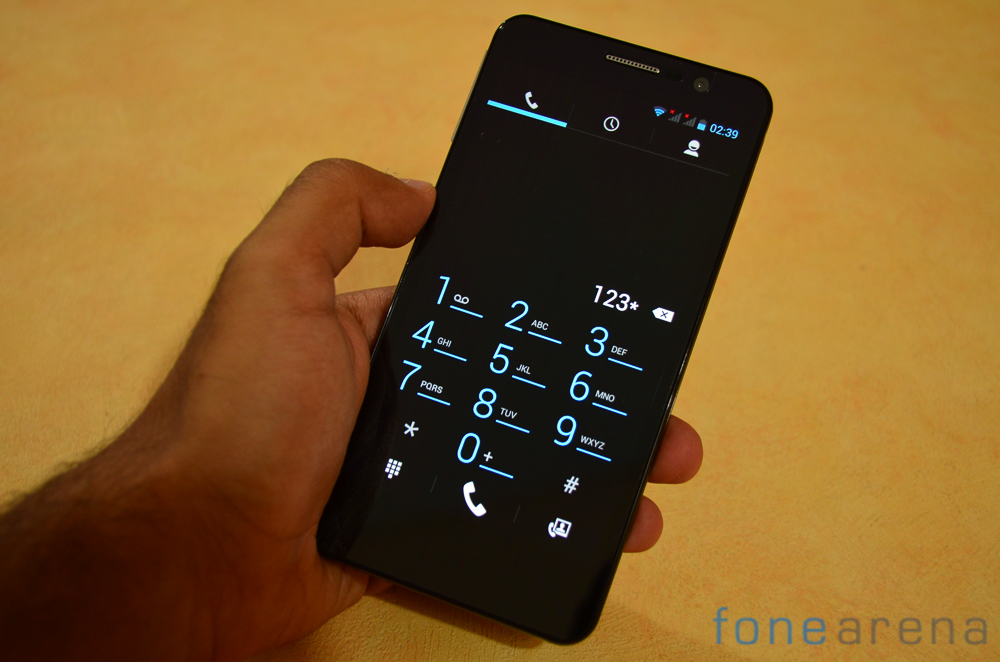 We’re not big fans of the materials used in the handset. The materials used feel cheap. Though the handset doesn’t flex even under pressure, the build of the handset isn’t very reassuring and we’d be extra careful while using it. The hyper glazed material is also a huge fingerprint and scuff magnet.

Like most other handsets in this category, the Videocon A55HD has a 5inch HD display. The resolution is 1280 x 720 which results in a pixel density of 295PPI. The handset uses a one-glass solution (OGS) that combines the touch sensor and the covering glass into a single sheet. Such a solution allows you to get even closer to the display. 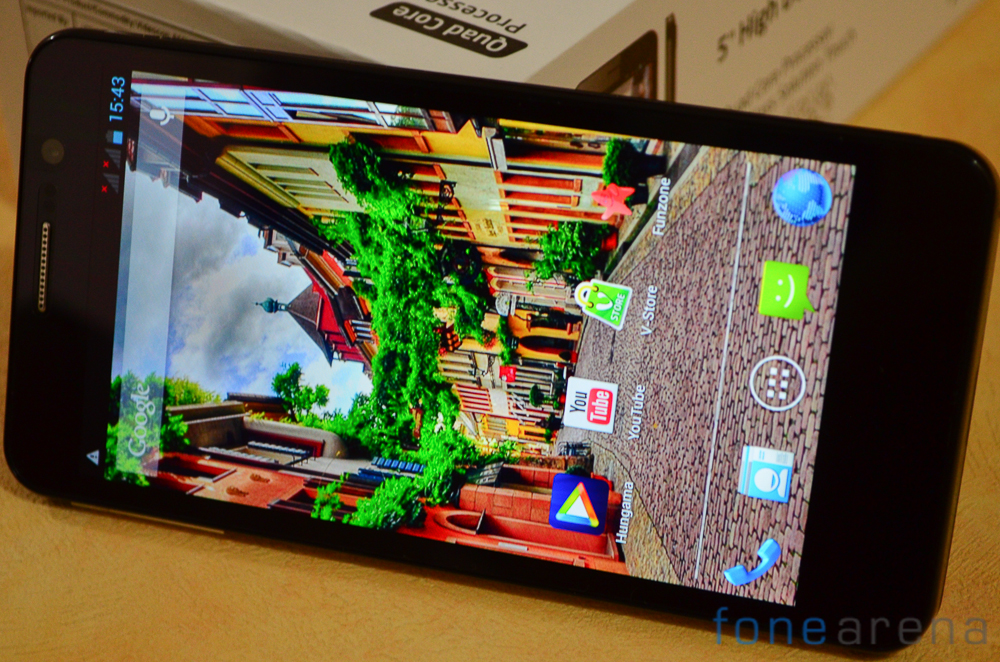 In practical usage, the screen is bright and vibrant. Being of the IPS variety, viewing angles are really good but color reproduction isn’t very natural. Videocon has tweaked the saturation levels to be on the higher side which is something that most people prefer when consuming media. Something worth noting if you prefer muted and more natural looking colors. We found that the screen has been calibrated to favor warmer shades as whites appear to have a slight pinkish tinge to it. It is not something that would prove to be a deterrent. Day light visibility is a hit or miss predominantly due to the hyper glazed front fascia of the phone that is extremely reflective. It is hard but not impossible to see the screen in direct sunlight.

The Videocon A55HD runs on Android 4.2.1 which is a point release behind the latest version and some of the competition. Videocon hasn’t really messed around with the operating system and has gone in for the stock interface. 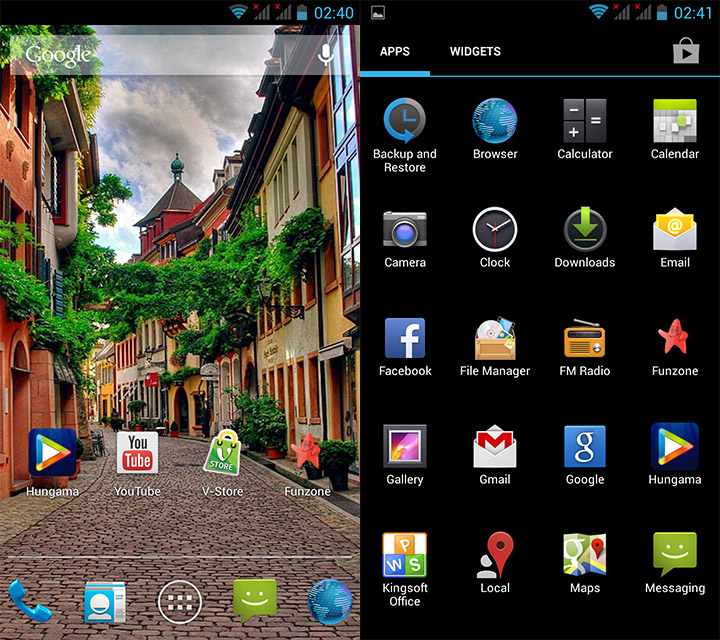 They have however preloaded some applications including the Funzone, Hungama and TOI applications. In addition, a copy of Kingsoft Office is also preloaded to allow users to access and view their office documents on the handset. 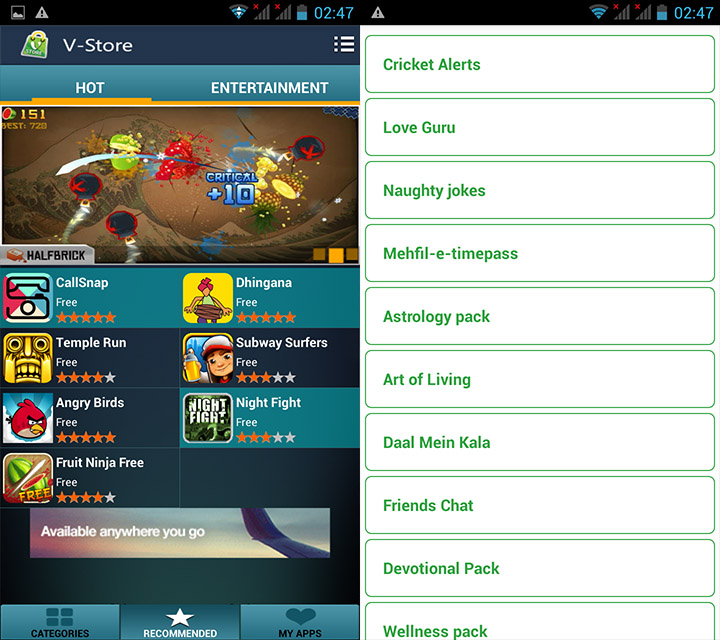 Interestingly, Videocon has also loaded their own app store dubbed the V-Store that offers a range of curated applications. The range of apps on offer is fairly limited and doesn’t include any paid or premium content. All applications can readily be found on the Play Store as well so you’re better off downloading them via Google’s official application store. Funzone as the name suggests is a one step solution to get access to SMS based entertainment services. This includes Cricket updates, Astrology information and a Devotional pack amongst others. These services are chargeable by your network operator so you’ll probably want to be cautious while activating them.

The Videocon A55HD is powered by a 1.2 Ghz quad core MediaTek 6589 processor and has a PowerVR SGX544 GPU. The RAM onboard is 1GB of which about 550MB is available at launch. Software on the phone is well optimized and we didn’t notice any lag at all in the interface. The handset managed to chug through  almost anything we tried out on it. The GPU in particular is capable enough to enable high end gaming. We’ve previously done a range of synthetic benchmarks that you can check out here. 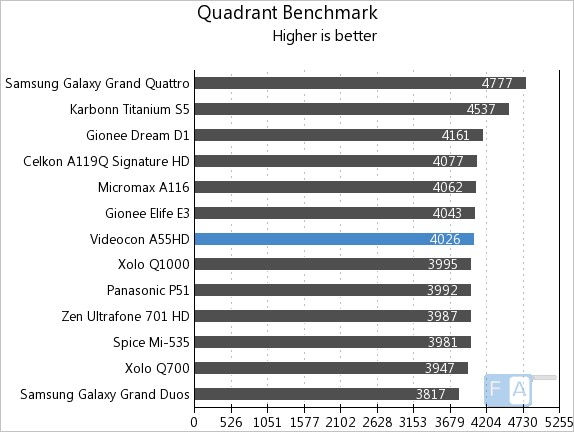 The phone proved to be competitive in our CPU centric benchmarks and kept up with most of the other devices in the category. However devices like the Karbonn Titanium S5 which runs on a Qualcomm Snapdragon 200 processor and Samsung Galaxy Grand Quattro managed to outpace the phone in the Quadrant benchmark. 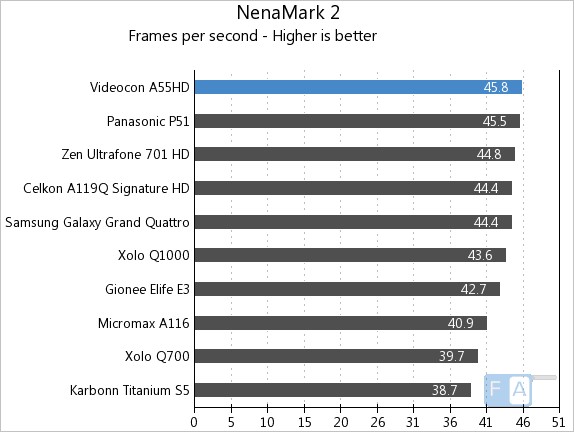 In the GPU centric Nenamark 2 benchmark, the phone scores the highest frames per second.The PowerVR SGX544 GPU is potent enough to power pretty most modern Android games. We’ve done a few gaming focused benchmarks that you can check out below.

Despite the phenomenal capabilities of smartphones these days, majority of usage is still multimedia consumption. Given the popularity of Android, a vast variety of third party applications exist that can fulfill any gap in the operating system. That said, we’ve test out a variety of multimedia content to test out what all codecs are supported by default. 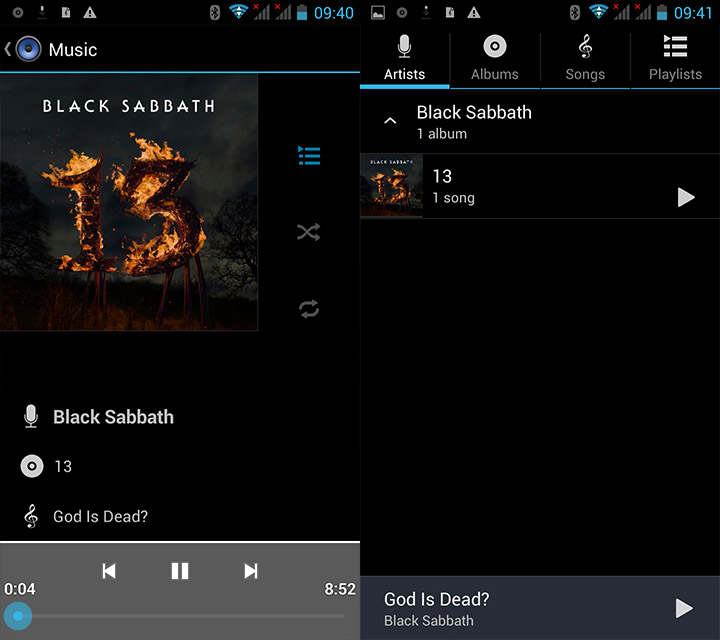 In our audio centric tests, the handset managed to effortlessly play back mp4, m4a and even the FLAC format. The music player application itself is based on the AOSP music player and doesn’t look too good. You’ll be better served by downloading a more full featured audio player and we’d recommend PlayerPro. 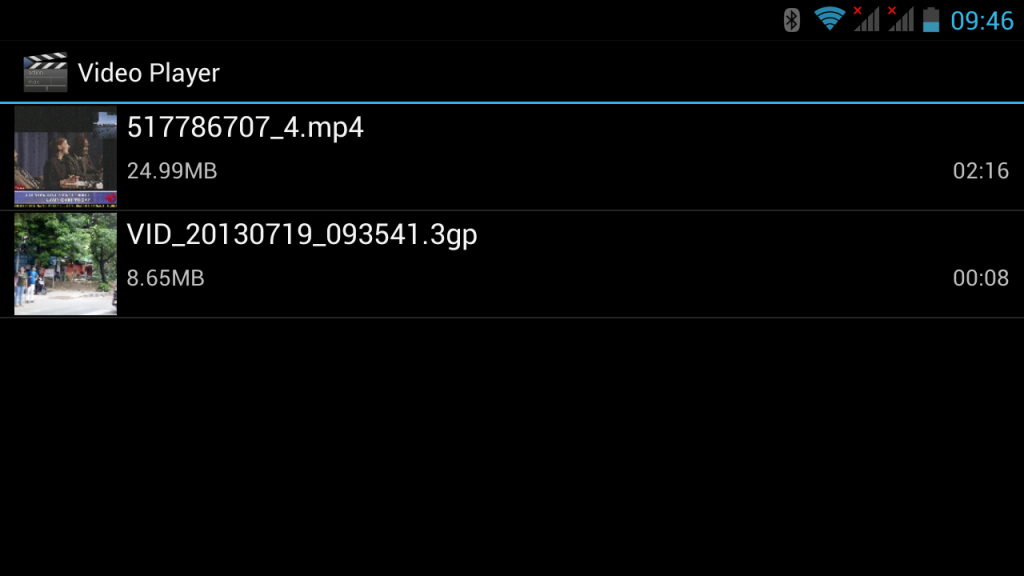 In the video playback benchmarks, we had some interesting results. The handset just about manages to play high profile 1080p content with a constant bit rate of over 10mbps. There were a few dropped frames and the audio playback in the mkv container format can be a hit or miss. Coming to 720p content, the handset effortlessly plays back high bit rate (6mbps) content. Video available online is mostly compressed to around the 3mbps mark and the phone had no trouble playing that back as well. Needless to say, standard definition content works as expected. While there can be audio compatibility issues when playing files with the mkv extension, avi and mp4 files had no such problems.

Android gaming has come a long way and is a major focus for users when buying smartphones. On that front the handset isn’t the most impressive. As you can see in our gameplay video, the handset often displays dropped frames while playing an intensive game Asphalt 7.

We tested out another very popular game ie Shadow Gun. Here too it was possible to spot dropped frames but the game was definitely playable. We’ve embedded our gaming review of the handset below.

The camera module on the Videocon A55HD has an 8 megapixel sensor paired with an LED flash. The front facing camera has a 3.2MP sensor. The camera interface is easy to use and includes quite a few settings to let you get your perfect image. 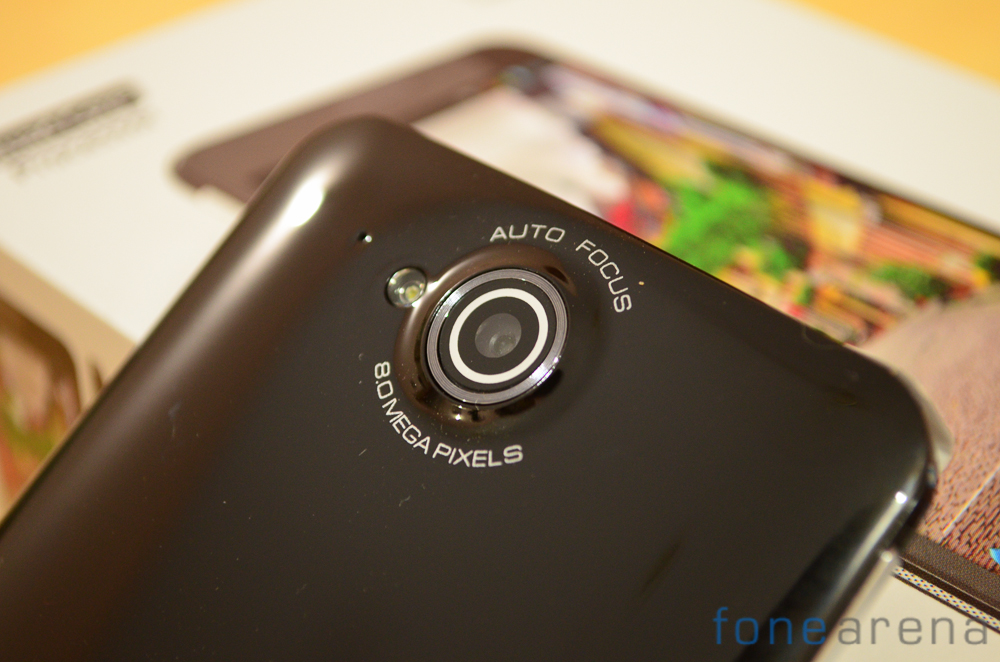 The camera interface is easy to access and includes a wide variety of modes and features that should enable the user to capture the desired shot. On the top right corner you have a toggle to switch between the front and back facing cameras with the LED toggle next to it. The photo and video capture buttons are on the right side of the display. On the left you can spot the variety of shooting modes available with the standard auto mode right on top. HDR, Face detection, Panorama, Scene selection modes amongst others can be selected from here. 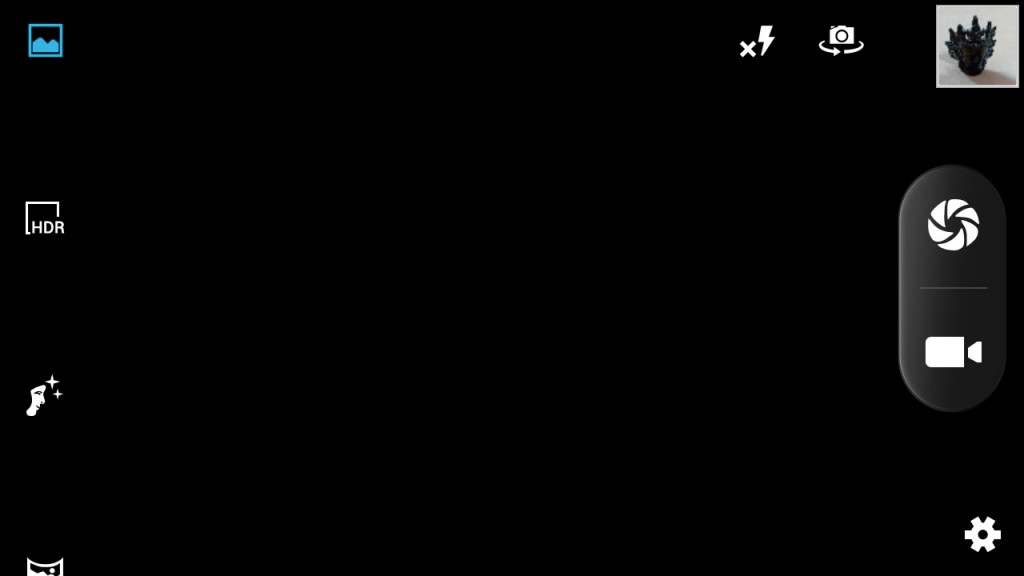 The face detection mode in particular works extremely well as demonstrated below. Even in fairly complex image, the camera could easily spot and track the face. Autofocus was quick and the phone could get a lock even in less than ideal lighting conditions most of the times. 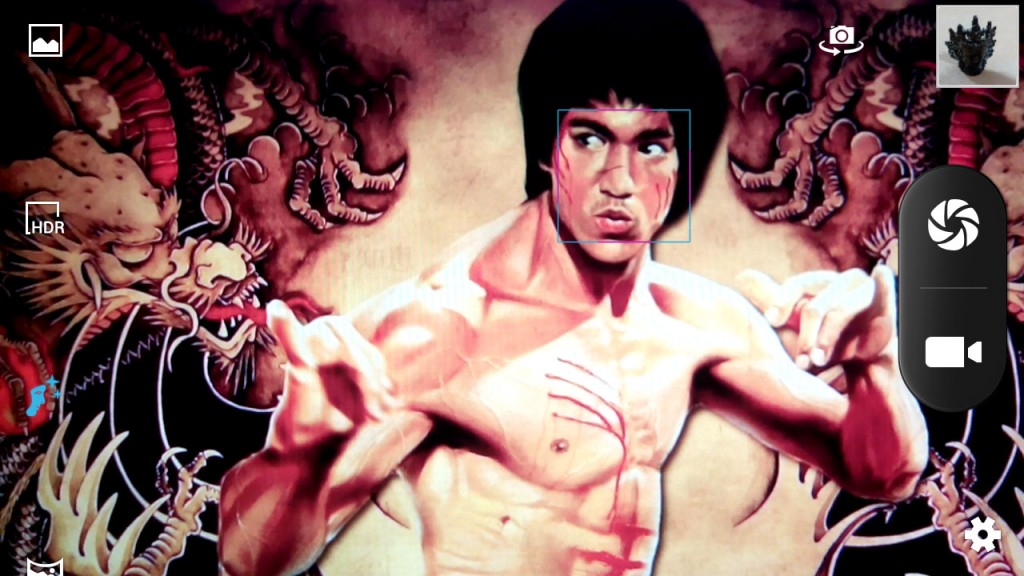 We’ve embedded a range of image samples below which show off the camera capabilities in a variety of lighting scenarios. Generally the camera could retain most of the details in the image as long as lighting was good. Noise levels are controlled and photos have a neutral tone to them unlike several camera that oversaturate the image. You can always tweak the end result to suit your liking.

The limited dynamic range was evident in the shot with the flags wherein most of the details were lost in the dark part of the image. This is a problem that you see in most smartphone cameras. Noise levels ramp up in low light shots and the camera also increases exposure times a bit which means you’ll have to keep the camera were still and steady to get a blur free shot. Macros are handled well by the Videocon A55HD and a focus lock was quick to achieve. Videos can be shot in up to 720p resolution and are saved in the 3GP format. Video quality was average at best with a fairly high level of compression artifacts.

The Videocon A55HD is a dual SIM handset that supports 3G (HSDPA: 42.2 Mbps, HSUPA:  11.5 Mbps). Connectivity options include WiFi 802.11 b/g/n, Bluetooth 4.0 and GPS support. There is 4GB of internal storage of which approximately 1.7GB is available to the end user out of the box. A micro SD card slot can be found under the back panel that allows you to expand the inbuilt storage. The handset can make use of built in sensors to offer features like flip to silence a call. 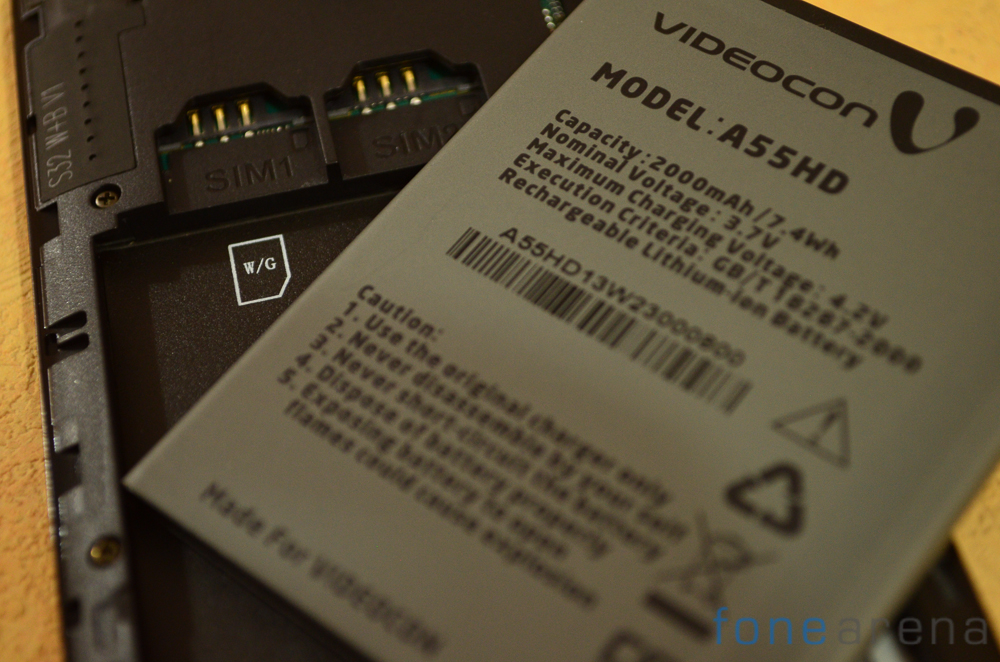 The battery on the Vodafone A55HD is a 2000 mAh unit that lasts a full day of usage. Even under extended usage with multiple email accounts synced and several online services running in the background, we could get a work day of usage out of the battery. This should be adequate for a majority of users and thanks to the replaceable battery, you can always switch it out for another one. You will definitely have to charge the phone overnight though.

We quite liked the performance of the handset and the display is definitely top notch. The camera proves to be above average and takes very decent still shots. Videos max out at 720p resolution and are shot in the 3GP format which wasn’t very impressive. 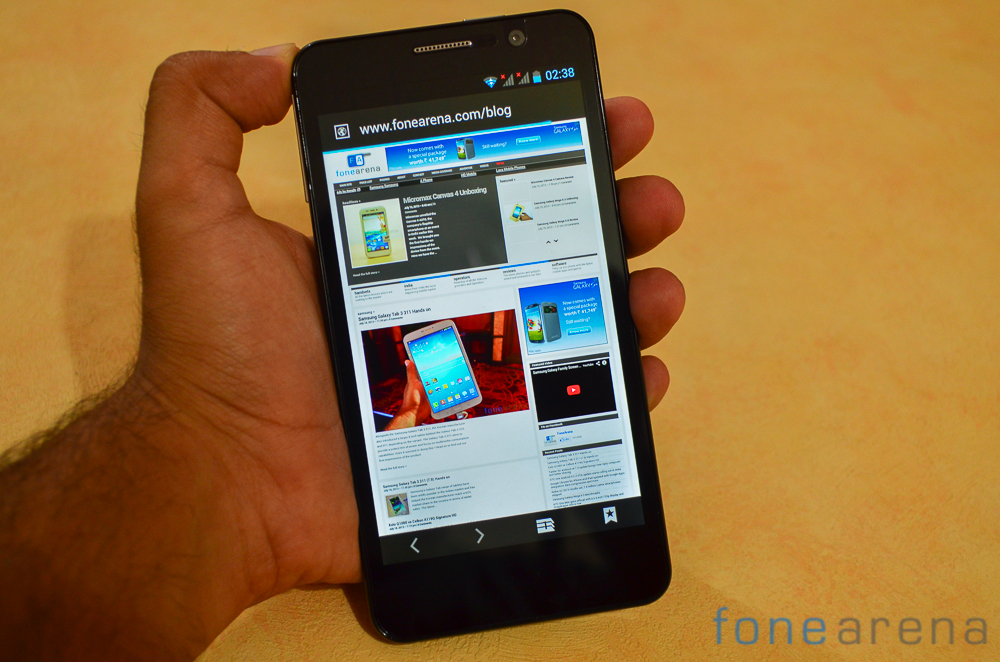 Where the Videocon A55HD really suffers is in the choice of materials used. The plastic feels cheap and is a fingerprint magnet. The device feels quite delicate and you’d want to be careful with it. Additionally, the gaming performance of the phone could have been better with the handset suffering from frame rate drops during intensive parts of popular games. Priced at Rs. 13,499, we feel that there are better options out there than the Videocon A55HD and you should check out handsets like the Lava Iris 504Q and the Zen Ultrafone 701HD as well.