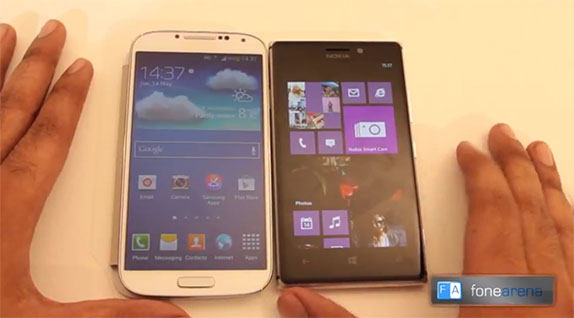 Moving from a strict polycarbonate diet, the Lumia 925 is thin and light and is now made of an aluminium frame and a polycarbonate backing. Compared to the Galaxy S4, the Nokia Lumia 925 feels far more premium with better materials overall. With a volumetric thickness of 8.5mm and weighing 139g, the device is almost equally thin as the Galaxy S4, which at 8mm of thickness and 133g of weight is slightly thinner and lighter. Both are impressive OLED displays, with the Galaxy S4 sporting a full HD Super AMOLED 1920×1080 display at 441 ppi while the Nokia Lumia 928 sports a 4.5 inch OLED at 1280×768 resolution and around 332 ppi.

We are stopping here, as we have a lot more to talk when we try out these devices again for an in-depth comparison. So, stay tuned for more Lumia 925 coverage from us, till then, keep looking at the Lumia 925 photo gallery, eh?