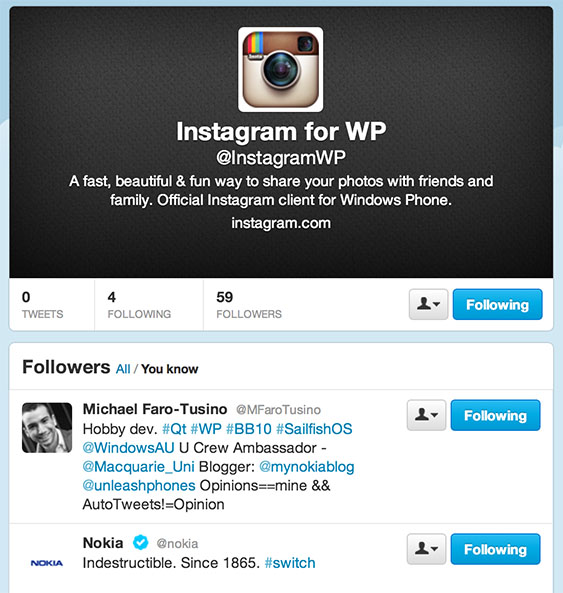 Only today did Nokia announce a new app in partnership with hipastamatic, which co-incidentally could share photos to Instagram. But as a surprise, we spotted this @InstagramWP account – which claims to be the official twitter account for THE official Instagram client for Windows Phone. While trying to check the credibility, we found that the official Nokia account was actually its first follower, adding more clarification to our doubts. So, yes, the official Instagram app for Windows Phone might be just around the corner then, yay?

As you might know by now, Nokia had been really desperate to bring Instagram on board its chosen platform, Windows Phone. It even created its own app called “#2instawithlove” which had a few filters and was primarily aimed at showing that Windows Phone users really cared about Instagram on their platform. It might have also been a way to show metrics so that Instagram will actually consider the platform for engagement. Anyways, that happened a while ago and we still saw no response from the folks at Instagram. It was one of the top 50 apps on other platforms that Microsoft had to get and Nokia too were desperate to get it on their phones, and it may have finally happened with the above news.

We are currently of the opinion that it is Nokia who pushed for the app, because they were the first official Twitter account to follow this Twitter handle. Have Nokia and Instagram reached into a deal of some sort? Will the official Instagram for Windows Phone be a Nokia Lumia exclusive? None of the accounts responsible for this have tweeted about it. But we will find out soon enough when the official word gets out. For now, the waiting game begins, again!