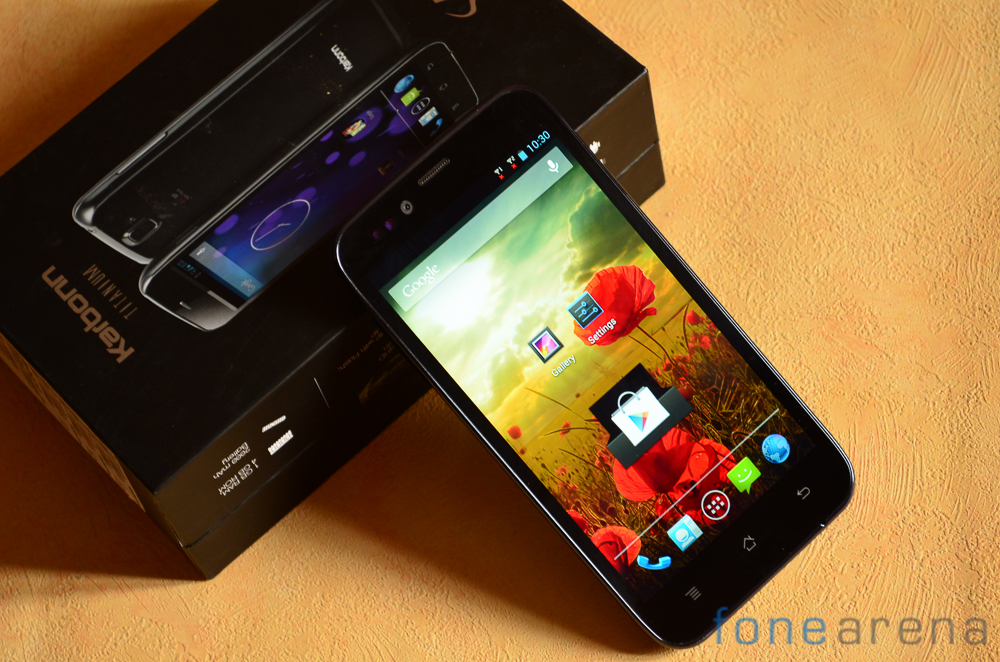 Karbonn is one of the few Indian smartphone manufacturers who have managed to make a mark in the market because of their focus on good build quality and specifications. Their latest handset, the Karbonn S5 Titanium is a 5 inch behemoth that combines the big screen experience with an affordable price tag but will this be sufficient to make it appealing to the masses ? Read on to find out.

The Karbonn S5 Titanium is a svelte handset with a high gloss finish that makes it look quite appealing. The front of the phone showcases the large 5 inch qHD display. A front facing camera can be spotted right next to the earpiece grille. The micro USB port and 3.5mm audio jack are located at the top of the phone whereas the micro SD card slot and SIM card slots are located under the back cover. 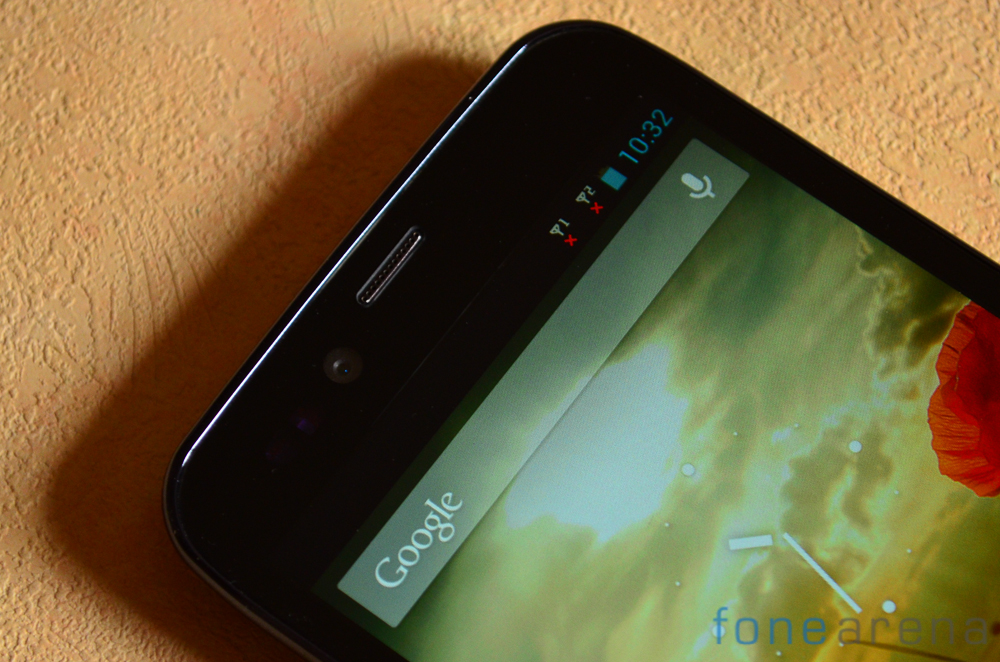 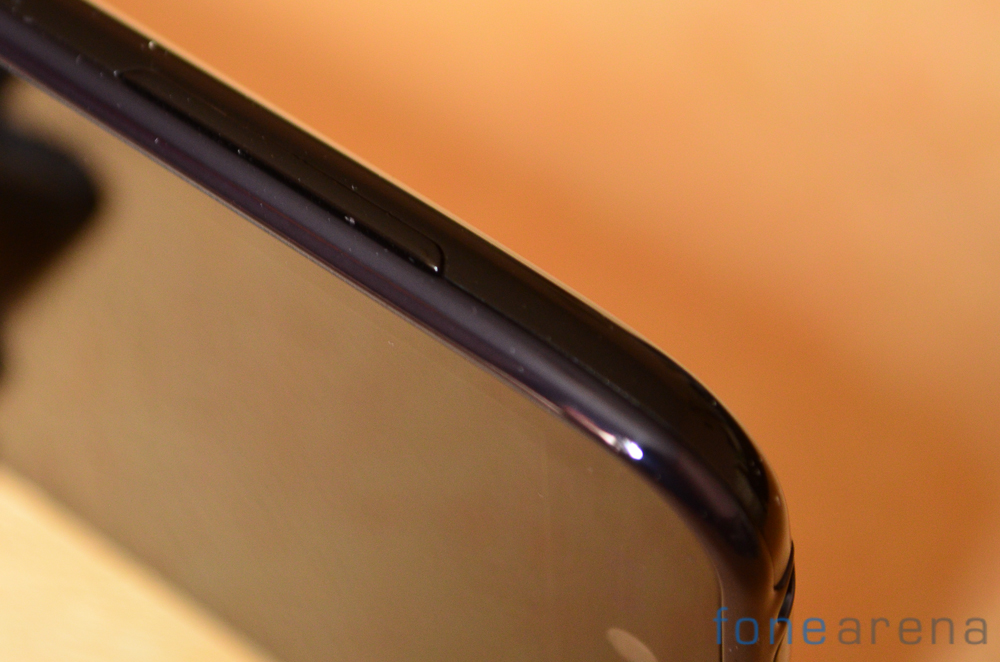 The Karbonn S5 Titanium sports capacitive keys below the screen. The buttons correspond to the menu, home and back keys. As expected, feedback from the keys is pretty good. 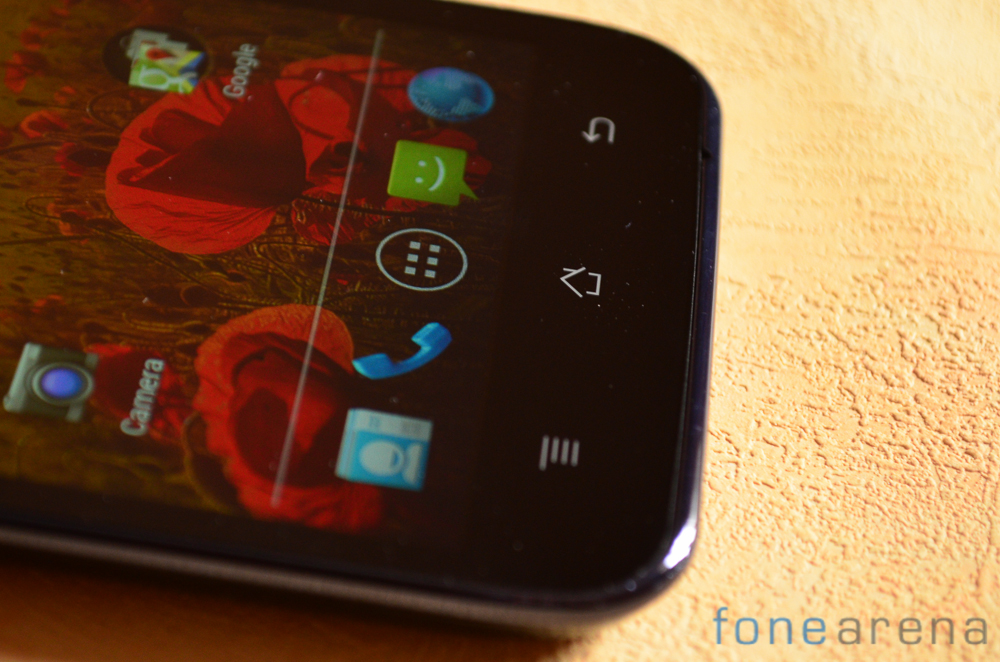 Moving over to the back of the device, we quite liked the deep blue color used. That said, the back cover of the Karbonn S5 Titanium is a major fingerprint magnet. It is nigh impossible to pick up the phone without leaving smudges all over the back. In addition to fingerprints, we found that the back cover picked up scratches rather easily. 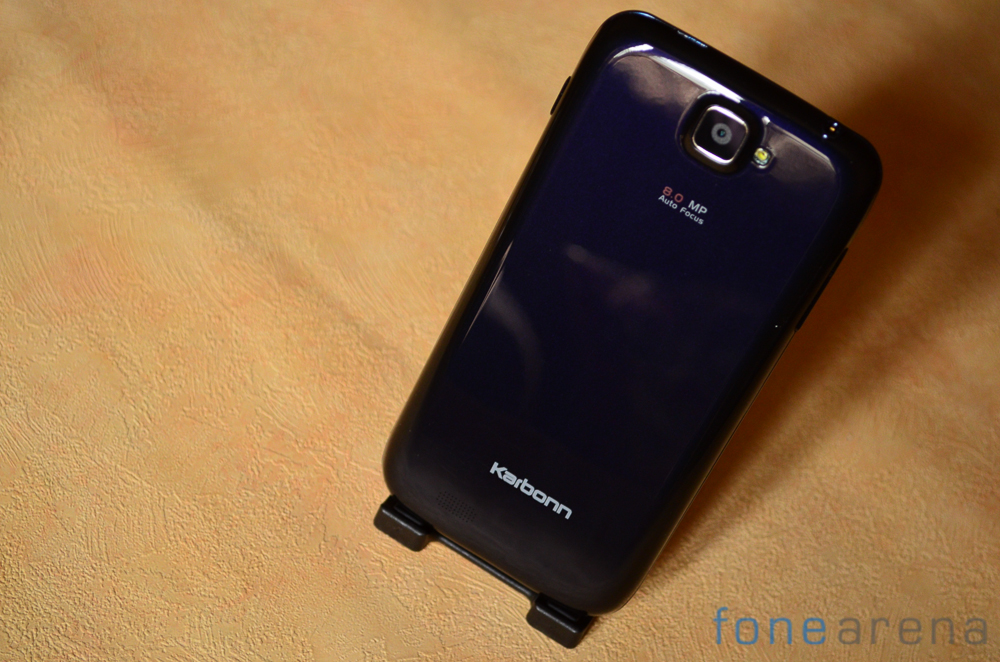 Overall we find the Android 4.1 running Karbonn S5 to be quite an attractive device which is unfortunately let down by the use of extremely fingerprint and scratch prone materials. Add to that the borderline unwieldy dimensions and we’ve got to knock off a few points from the Karbonn S5 Titanium in the design department.

Karbonn has done a great job on the interface by not adding a custom skin on top. The interface is pretty much stock with some additions in the form of preloaded applications like Flipboard and Facebook 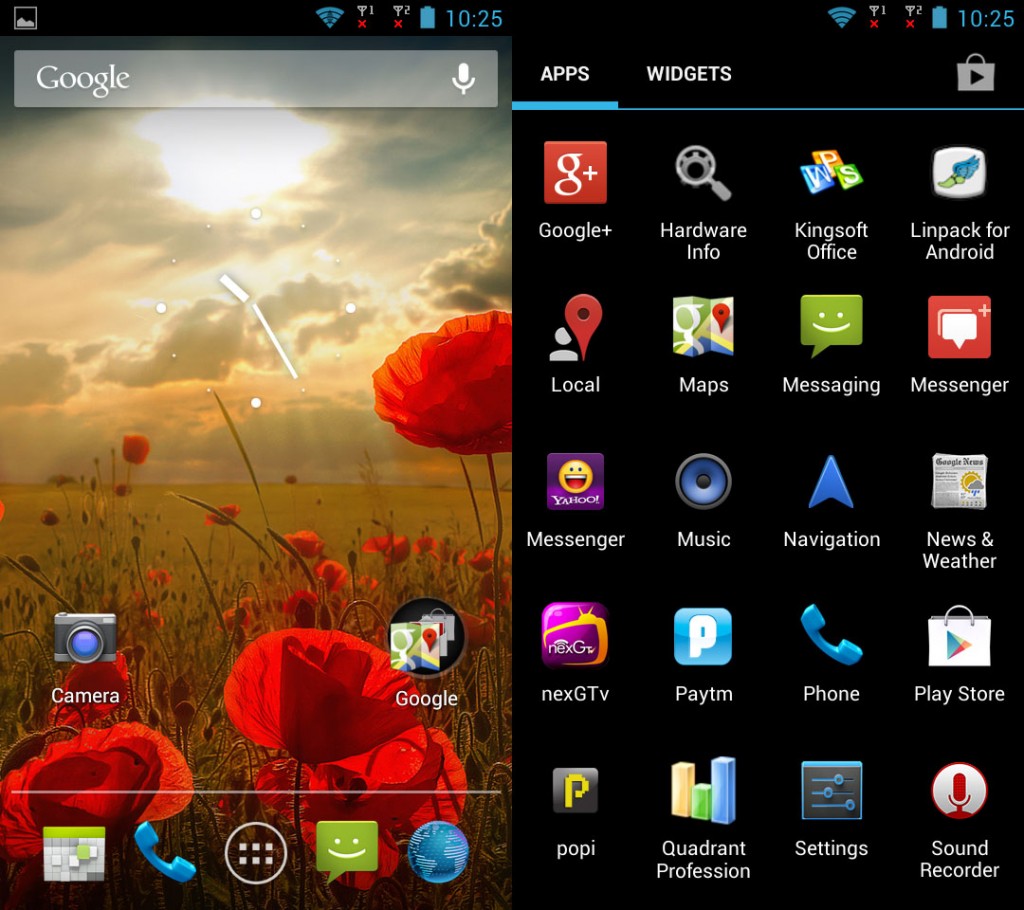 Running Android 4.1.2 , it is refreshing to see how clean the OS build looks. All this reflects in the performance too which is absolutely top notch.

As mentioned above, the performance of the phone is quite impressive. The processor powering the device is the Qualcomm Snapdragon 200 MSM8625Q which compares favorably to the MediaTek chips used in most competing devices. Multitasking too is effortless because of the 1GB of RAM provided. Day to day operations were completely lag free and the phone doesn’t have any problems with playing popular games like Temple Run. We’ve embedded a few synthetic benchmarks below to give you an idea of the phone’s performance in relation to its competition.

The phone performs quite well and manages to outpace the competition in some benchmarks while keeping pace in the others. Particularly in the Quadrant benchmark, the Karbonn S5 Titanium comes out on the top with a score of 4537. 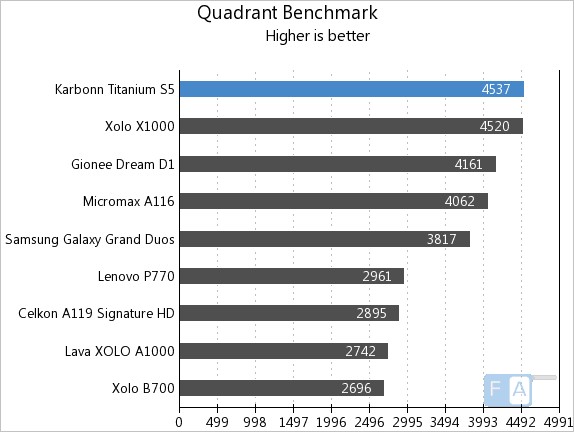 While not right at the top, even in the Antutu benchmark the phone is fast enough to keep up with the best. It lags behind only the Micromax A116 and Xolo X1000. 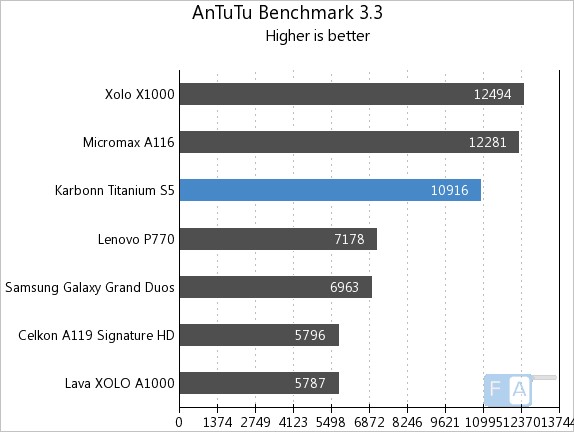 Here’s a video showing the benchmark performance across the board.

You can see how the phone performs in the gaming department by checking out the video below.

The 5 inch screen on the Karbonn S5 is perplexing to describe. On one hand, the colors and saturation levels of the display are almost spot on but the viewing angles on the hand leave much to be desired. 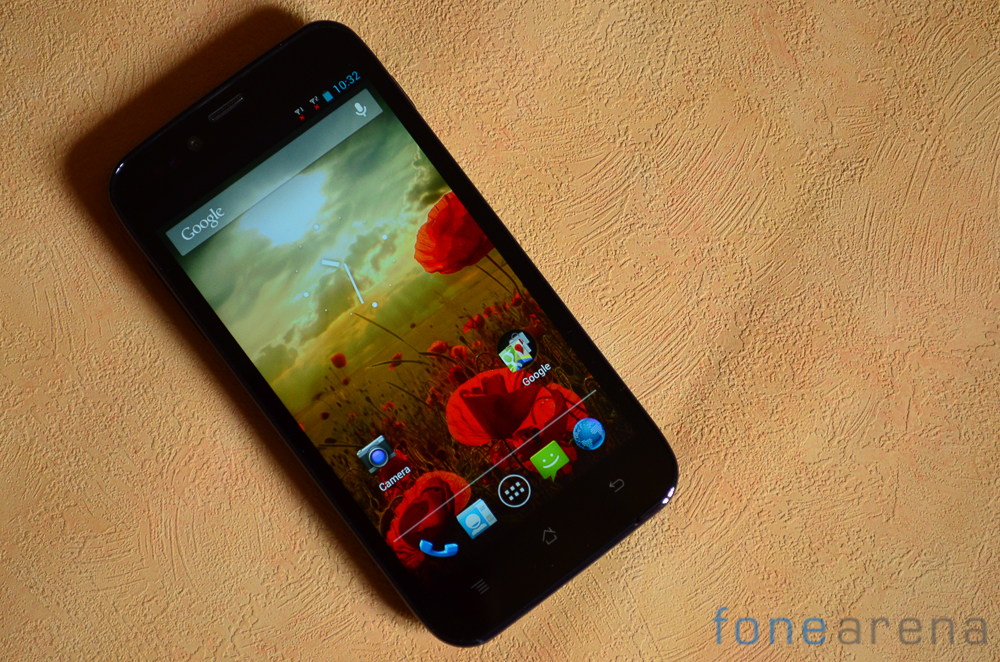 The low qHD resolution doesn’t do any favors to the handset either with the visible softness in text and images. We really do wish that mid range Android phablets should start moving to 720p displays to provide a better experience to end consumers.

The camera on the Karbonn S5 Titanium is an 8MP shooter with autofocus capabilities. An LED flash is located to the right of the camera module Video recording on the phone tops off at 720p. Over at the front you can find a 2MP camera. 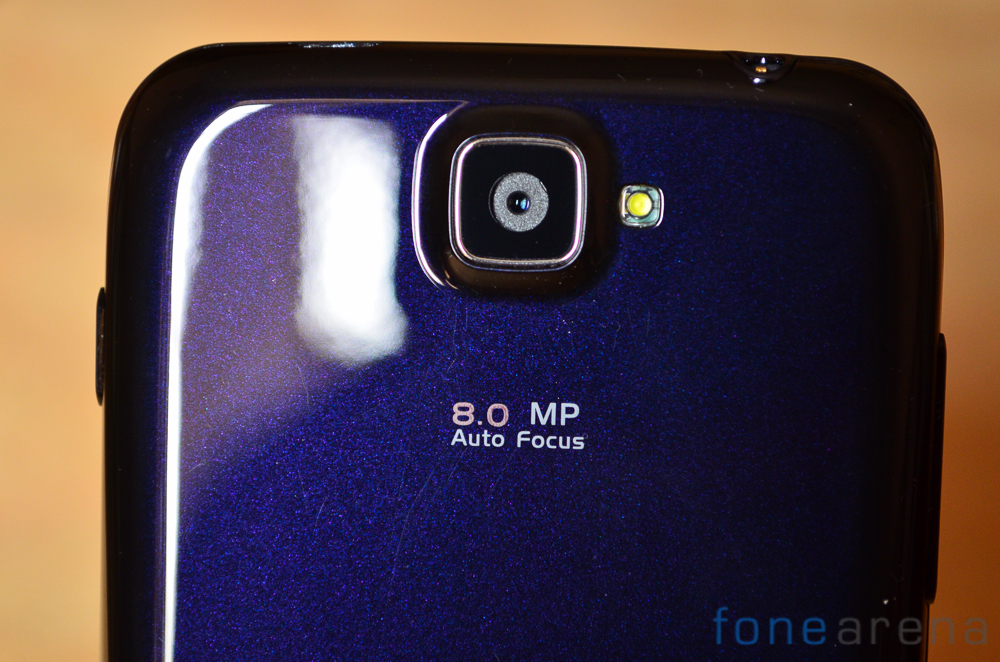 We were suitably impressed by the image quality of stills from the Karbonn S5. While not the best, images were fairly noise free and more than usable in all but the most adverse of lighting conditions. As is usually the case, low light images suffer from excessive noise. 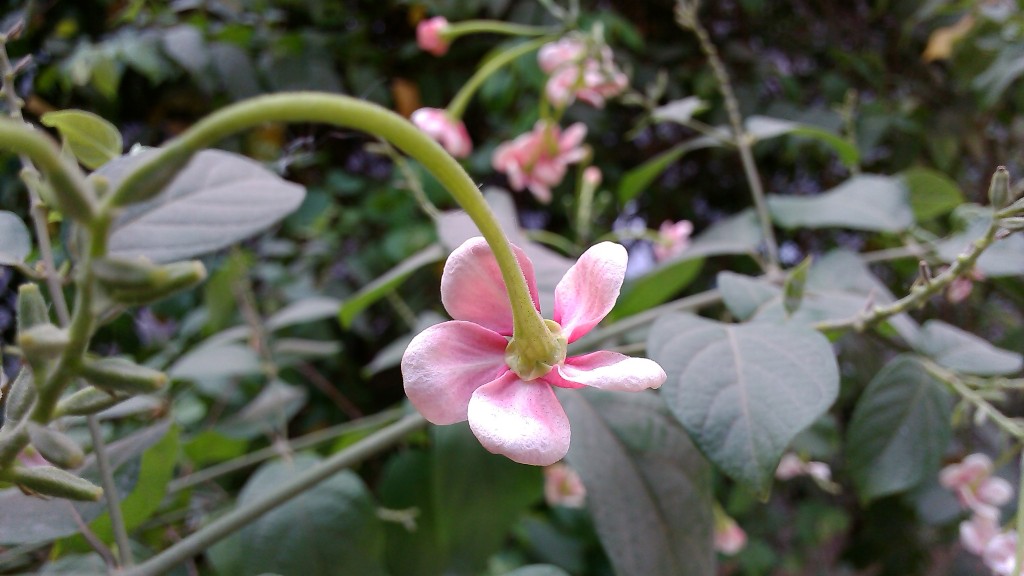 Close up shots were well in focus and the camera manages to retain a significant amount of detail. There’s not much to complain about on the close up/macro shot front. 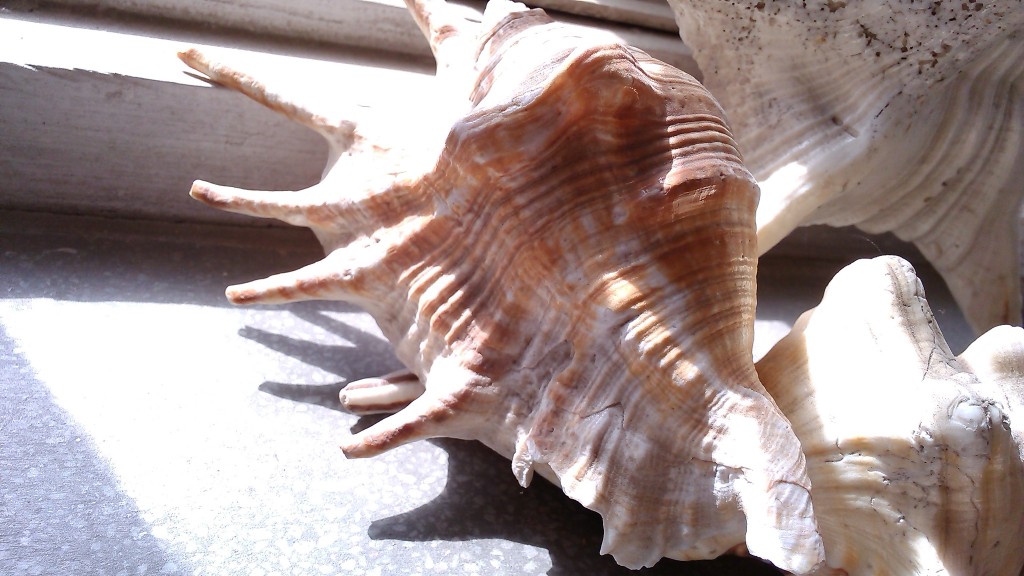 Things however do get tricky in extra bright conditions where the limited dynamic range of the camera is quite visible. As can be seen in the image above, the whites are almost completely blown out. Stepping down the exposure manually might help the user take a better image in this case.  The camera on the Karbonn S5 does manage to get the white balance right which is often an issue with budget smartphones.

The Karbonn S5 Titanium is a dual SIM handset as can be seen in the image below. However only one of the SIM cards supports 3G connectivity. On the left you can spot the microSD card slot. Internally you get 4GB of storage of which about 3.6GB is user accessible. Other connectivity options include the standard bluetooth 2.0 and WiFi b/g/n support. 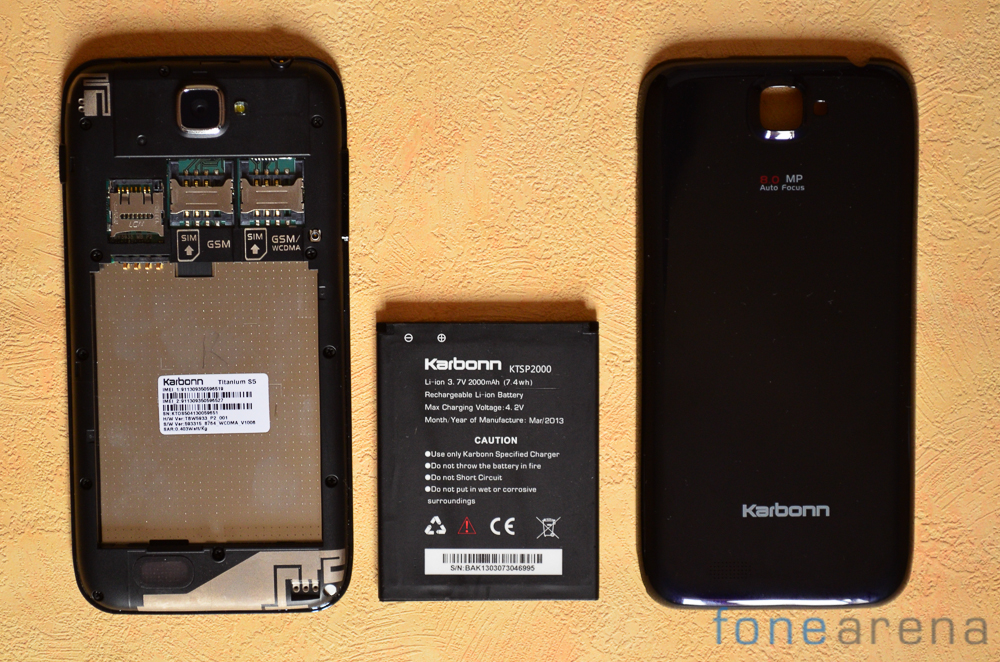 Equipped with a 2,000 mAh battery pack, the Karbonn S5 should be able to last a work day with ease. In our testing, it was possible to deplete the battery under heavy use but more relaxed and perhaps normal use resulted in a day of battery life. We’d recommend charging the phone overnight to avoid getting stuck with a dead phone the next day.

The Karbonn S5 is a commendable effort from the indigenous manufacturer which is let down by the use of rather poor quality plastics. Being a massive  fingerprint magnet detracts from any visual appeal the soft touch plastic might have. 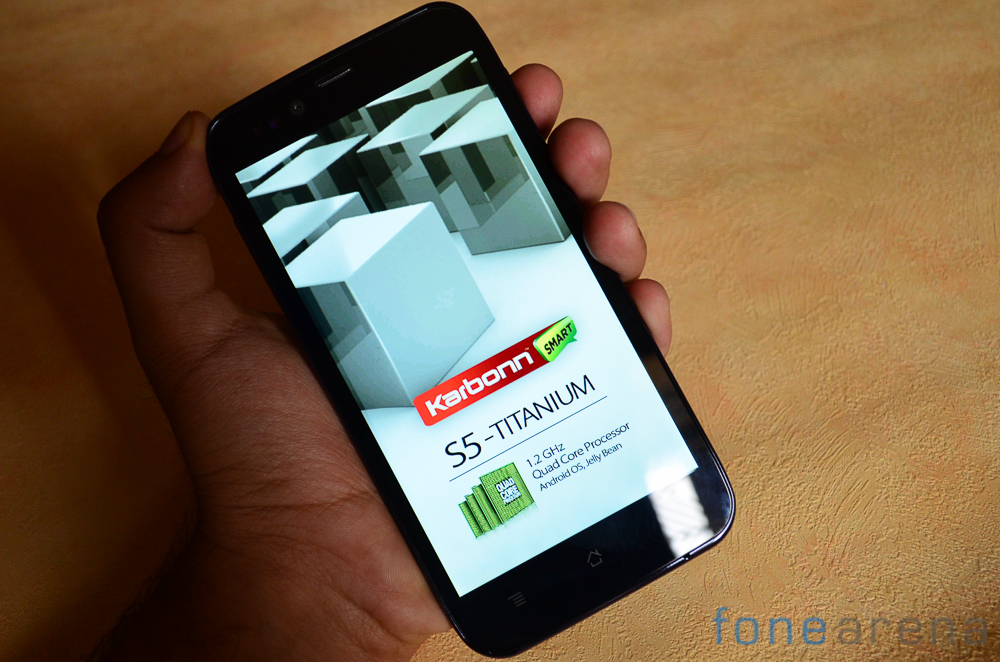 That said, performance is acceptable and even good across the board. The camera is perfectly serviceable and the near stock build of Android impresses. If you are comfortable with the somewhat unwieldy dimensions of the phone, you should give the Karbonn S5 Titanium a shot.  The Karbonn S5 Titanium is available for Rs 11,990.