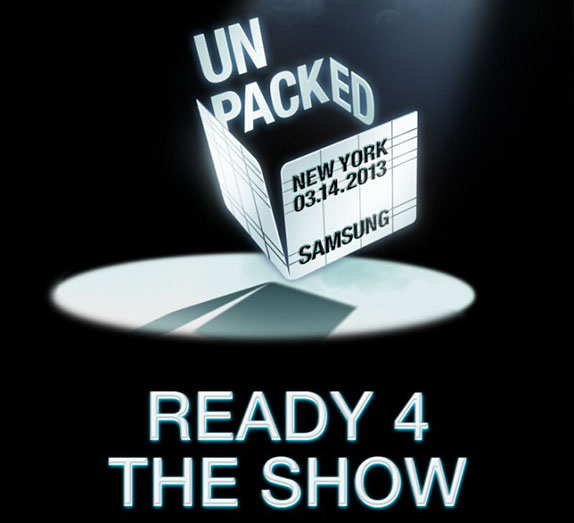 It was already known just a week back that the launch is going to happen on March 14th, but Samsung has gone and just unveiled a teaser video for the Samsung Galaxy S4, undoubtedly one of the most awaited flagship devices this year. The video has “4” prominently written all over it and suggests all kinds of adjectives for the upcoming phone, in a white unpacked box. Here’s the teaser –

The Galaxy S4 has been rumored for a quite a while now, which is so obvious considering the fact that we are nearing the yearly refresh cycle for the Galaxy S series of Android flagships from Samsung. The Samsung galaxy S4 specs surfaced recently, and according to the recent rumors it would feature a 4.99-inch Full-HD 1080 SoLux Display and feature a 1.9 GHz quad-core Qualcomm Snapdragon 600 processor. Other rumored specifications include, Android Jelly Bean OS, 7.7 mm thick and weighing in at 138 grams. It might come with 2GB of RAM, up to 64GB internal memory, a 13MP Camera, a 2MP front-facing camera and wireless charging.

Pretty hefty on the specs like all the other Galaxy S devices but it will be interesting to see what design change they are planning. The S3 brought a new wave of Samsung devices all echoing the same design philosophy, but it is about time they changed the materials used in order to compete with their premium competitors who have already switched to premium materials. Will Samsung finally give in to people’s demands? We’ll see about that, on the 14th of March.

[Update: Samsung has released the part 2 of the teaser. This hints at various colors of the Galaxy S4. It also says ‘to be continued’ at the end just like the first video.]