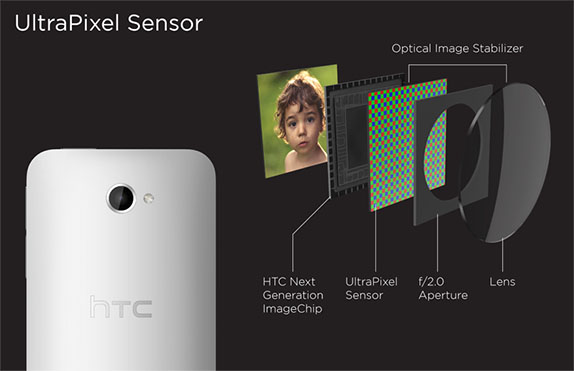 “The era of the megapixel is over.” These are the word HTC’s CEO, Peter Chou uttered at the HTC One launch event. With a thumping statement, HTC has announced itself a new player in the Smartphone camera race having developed its own custom camera technology called “Ultrapixel.” Like any other, we are also completely intrigued by the new camera technology, but what does it mean? What’s new? We are going to try to answer the questions in the simplest way possible.

P.S The HTC One Photo Gallery and our Hands on impressions. 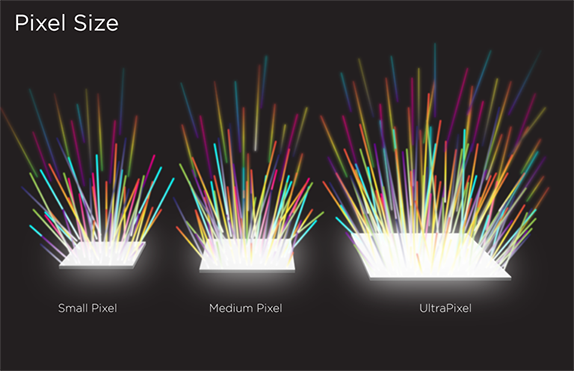 What is the UltraPixel?

HTC have gone ahead and used the term “UltraPixel” in their new announcement. The “UltraPixel” simply means that the sensor has large photosites, in turn meaning there are large pixels. Simply said, the HTC UltraPixel camera has big pixels, which let in about 300% more light than normal sensors. This is as per the marketing terms and the press release. Lets see what it actually means.

Usually, sensors in smartphones are really small. These sensors, most of the times packing a total of 8 megapixels, have pixels packed in a tiny frame, making the sensor incapable of delivering higher quality images. Usually, the smartphone camera sensors have a pixel size of 1.4 microns(1/1000 of an mm). For example, the Nokia 808 PureView, with a total of 41 MegaPixels packed into a 1/1.2″ sensor has a pixel size of 1.4 microns, and the yesteryear Nokia N8, has a pixel size of 1.75 microns with a 12 megapixel 1/1.83″ sensor.

What HTC has done is, put large pixels on a 4 megapixel 1/3″ sensor. So, with the sensor being large, and the megapixel count being low, the pixel size of 2.0 microns is achieved. The advantages of large photosites(or pixels) is more absorption of light, hence improving the low light performance. Also, due to the presence of large pixels, the data that is absorbed is of higher quality, giving you extremely clear pictures in most lighting conditions.  Consider this akin to a 5 MP oversampled photo from the Nokia 808 PureView, which, even at 100% resolution, looks crystal clear without noise or artefacts.

But we can judge the quality of the pics only through personal experience, so hang on until we get our hands on the HTC One. With that said, lets move on to the other features of the camera.

With the powerful ImageChip on the HTC One, the dynamic range(consider the range between shadows and highlights) apparently can be boosted up to ~84dB(a measurement of dynamic range). That almost matches the dynamic range of the human eye. So, basically the camera will be able to simultaneously produce images with shadows as well as highlights, perfectly lit, even if in the same scene. How it does, is by capturing interlaced(think sequential lines, that skip) frames up to 60fps(in 720p) with high as well as low exposure compensation eV values in different sequential frames. This is all processed in real time, so full HD 1920×1080 video can always have HDR frames.

Just like the Lumia 920, the HTC One comes with Optical Image Stabilisation. It works with a dedicated imaging gyroscope. The Gyroscope works in tandem with the OIS unit at 2000 times per second recognising each variation in two different angles called Pitch and Yaw. In simpler terms, the OIS unit works in two axes. The motion is countered by an opposite motion to the lens, thereby making it less shaky, and stable. There are two advantages to this, more shutter exposure for stills and stable video. HTC promises both on the One. We will be sure to test this out soon.

Other stalwart features of the camera include the f2.0 lens, a CMOS Backside illuminated sensor and a focal length of 3.82mm. The software, called ImageSense is also as robust as ever, providing ultra fast AF and 8fps continuous shooting. There is also a new social aspect to it called the HTC Zoe, but we are saving up the software parts for another post later.

In the end, the real world performance matters, and looking at the specifications and the niceties that the HTC One packs, we really think it is going to be good. But it will be really interesting to see how it matches up with the Nokia 808 PureView or the Nokia Lumia 920. Overall, we feel happy that HTC is doing something different, by staying away from the Megapixel race and trying to do something new. Lets hope there are lots more coming up from other manufacturers too. Till then, we shall wait for more real word examples from the HTC One.