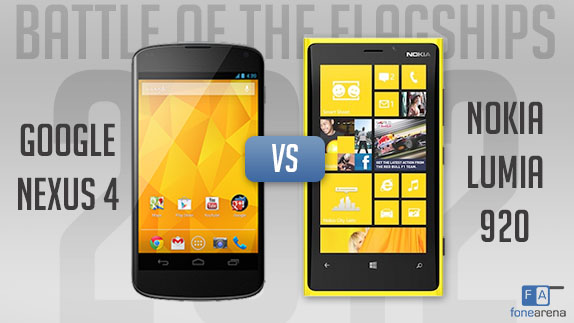 The first battle of the Round 2 just got over, with the Nokia 808 PureView yet again coming out on top. While one PureView is now ready for the final battle, the other one is now locked into a battle of platforms with the pure Google device that slaughtered the iPhone 5 in its previous encounter. Will it be a battle of the PureViews at the end or will it be Android winning over Windows Phone 8 in this round? Lets get to the battle and see what happens!

The Google Nexus 4, as we know, is made by LG and thus carries all the goodness that the Optimus G comes with, as it is their flagship device. Lets quickly take a look at the highlights of the Google Nexus 4 as mentioned in our earlier battle.

As these devices have been discussed well enough in their earlier posts, lets get them to fight head to head in all aspects.

The Nexus 4 was designed by LG with a lot of guidance from Google, naturally. And hence it resembles the Galaxy Nexus on the front while on the back, there’s a nice pattern and unfortunately, it is covered in glass and it is prone to break. But apart from that, the Nexus 4 is really slim, and easy to hold. It has soft touch rubberised plastic on the sides which improves the grip nicely. The Lumia 920 on the other hand is following the fabula design language that was introduced with the N9 and adapted to the Lumia 800. The Lumia 920 is, simply said, a bigger and the most refined Lumia 800. It has a curved screen, a unibody polycarbonate body with a pillow shaped design and a neat Zirconium based metal strip on the back that houses the brand name and the camera unit. Overall, it’s a very nice looking design, but it has some caveats. It is thicker and heavier than the Nexus 4 and it is always a subjective preference when it comes to design, so I leave it for the users to decide.

Both these devices sport a IPS panel at the same resolution. The Nexus 4 has a zero gap 4.7″ IPS TFT display at 1280×768 resolution, while the Lumia 920 has a 4.5″ IPS TFT PureMotion HD+ display at the same 1280×768 resolution. The Lumia 920 also has a clear black coating to the display, which is a polariser coating to improve the deep blacks and outdoor visibility, and on the 920, they have also vastly reduced the air gap between the screen and the glass, much like the zero gap display on the Nexus 4. One more improvement on the 920 is the PureMotion technology which enables 60 fps smooth refresh rates, unheard of on other phone screens, and certainly bodes well for Windows Phone 8’s fluidity. While the Nexus 4’s display and the Lumia 920 display both hold their own for being the best of the smartphone screens, the extra polariser coating and the 60 Hz refresh rate, oh and did I mention the version 2 oleophobic coating on the 920, yes and that too makes it the winner in this department. Easily, one of the best screen experiences on the 920.

The internals of both these devices are from the same company, in terms of the S0C. The Nokia Lumia 920 has a dual core Snapdragon S4 chip that runs at 1.5 GHz while the Nexus 4 has a Snapdragon S4 Pro quad core chip that runs at 1.5GHz. Clearly, the Nexus 4 is more powerful, and even the GPU is better, Adreno 320 vs Adreno 225. With Android Jellybean, which will be updated instantly when Google plans to release their next version of it, the Nexus 4 remains one of the most powerful handsets in the Android world. But the Lumia 920 is no slouch, the dual core CPU is Krait based, just like the S4 pro, and offers very good performance, and Windows Phone 8 is optimised for performance since its inception so that gives it an advantage. The RAM on the Lumia 920 is only half as much as on the Nexus 4, but we can never say how it might affect performance as each OS has its pros and cons when it comes to optimisation of the available resources. But in the end, in terms of raw performance Nexus 4 wins in this department, and then, it is upto you to choose which works better for you.

The Google Nexus 4 has a 8 MP camera unit, which is pretty decent, and certainly better than the abomination that was, on the Galaxy Nexus. Meanwhile the Nokia Lumia 920 has a 8.7 MP hybrid sensor, shoots great photos in low light thanks to optical image stabilisation built into the camera unit, and at the same time offer great shake free videos in full HD. It carries the PureView brand too. While it may not be the best camera phone in this world(808, S3 and iPhone 5 are better in day stills), it certainly holds its own, especially in low light conditions and video. It is an easy win for the Nokia Lumia 920 in this department.

The Nexus 4 is a pure Google device that runs the latest and greatest Android OS. It will get all the updates instantly and stays on top of Google’s preferred devices for developers. Android is a very matured OS right now, with abundant features and customisation options. At the same time, Windows Phone 8 has kinda slowly catching up to iOS in terms of features and offer a bit more customisation than before. While the prospects of Windows Phone 8 are amazing, it still lacks a while lot of features that are available on Android. And it is certainly easy to say that Android has more app support than Windows Phone as of now. So, in our opinion, Android wins this round and hence the Nexus 4 wins this round.

Price is a arguably a hard criteria for this battle, but has to be considered as the Nexus 4 sells in the US, at a measly amount of 299$ for the 8GB version and 349$ for the 16 GB version. The Lumia 920 though, sells for 450$ off contract(99$ on contract for the 32 GB version with AT&T) and 625$ for the unlocked version. The Nexus 4 has not gone on sale in India, and the same applies for the Lumia 920. While we don’t know at what price and when these devices are going to be released but we certainly expect the Nexus 4 to cost lesser than the Lumia 920.

With all the above factors considered, now it’s time for you to tell us which device you like. So, vote away in the polls below, and remember, this device will go on a head on battle with the 808 PureView for the final battle, and will be directly fighting for the ultimate crown “FoneArena Flagship of the year 2012”.

The poll has been closed and the Lumia 920 came out as the winner of this battle, so it is a battle of the PureViews for the final! 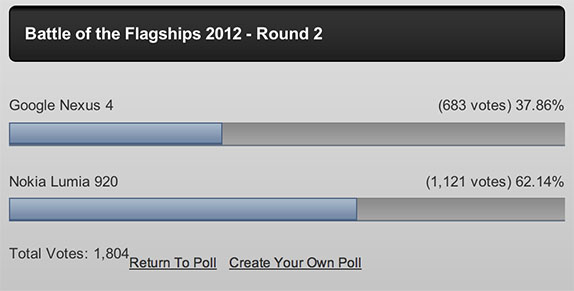 Check here for the current standings and the results of other battles that preceded this one. 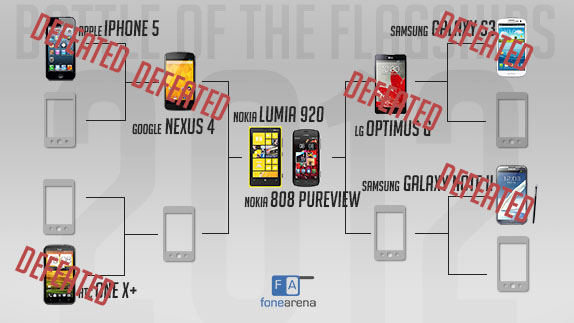