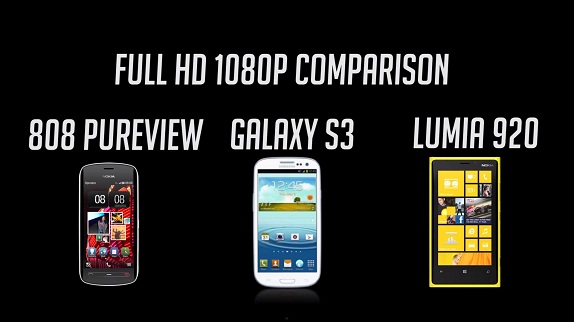 We had just unboxed the Nokia Lumia 920 a few days back and are pleasantly surprised by its camera performance, especially in the video recording department. So, we gathered up two other phones(with point and shoot rivaling cameras) namely the Nokia 808 PureView and the Samsung Galaxy S3 from our labs and put the three to test in terms of full HD 1080p video recording. And this is how it turned out –

As you can see above, the Nokia 808 PureView is still the king when it comes to any kind of camera related task it is put to. If you ask us, we felt that the video quality, with excellent image stabilization was best on the Nokia Lumia 920, while the audio quality was best in the 808 PureView.

It is also interesting to note that none of the devices were able to replicate the exact colour from reality. The 808 PureView had washed out colours, but was almost close. The Lumia 920 had warmer colours while the Samsung Galaxy S3 had cooler colours. Again, the Nokia 808 seems to trump the other two phones.

Regarding audio, the 808 PureView and the Lumia 920 have something called Rich recording(HAAC mics are used), and that is why you are able to listen to the rumblings of the wind in lower frequencies. The Galaxy S3, which lacks any kind of audio wizardry in video recording, utterly fails in that department, leaving much to be desired.

We also acknowledge that YouTube might have compressed the heck out of that video so you might not be able to judge them in terms of quality, but rest assured, all of them were almost equal, with the Nokia 808 resolving more detail than the other two. We did note that in the Galaxy S3, the highlights were kinda over blown, but otherwise top notch video quality from all the three devices.

One special mention should go to the Nokia Lumia 920 though, yes, the OIS seems to work amazingly well in reducing shake. Might not be so apparent from the video, but trust us, it works very well. Also, the 920 produces the most vibrant video with good contrast, however sacrificing some detail because of that.

Final note, this is not an empirical test by any means, just a casual real-life example comparison of how the three devices perform in terms of full HD recording. Let us know your thoughts in the comments section below.