Sony has a long history of providing compelling hardware marrying good performance with affordable pricing. The Xperia J is yet another addition to this long list of handsets with specs which at least on paper make it sound like a winner. 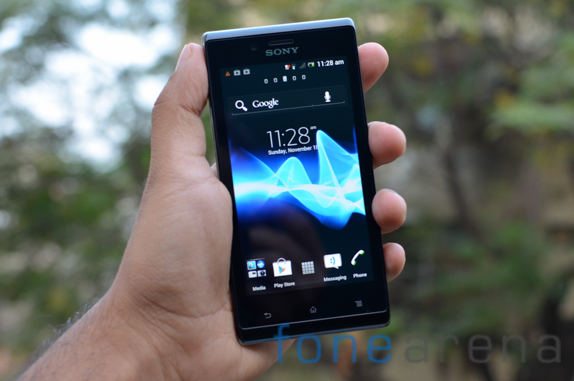 Will it become the handset of choice in its price range ? Read on the review to find out !

The Xperia J ships with only the essentials in the box. You can view the unboxing below.

The Xperia J does not break any boundaries of design but is far from an eyesore. While the black facade is plain and the glossy plastic is a fingerprint magnet, the gently curved white back feels good in the hand. The matte finish plastic exudes quality but we worry that it will pick up stains over time. 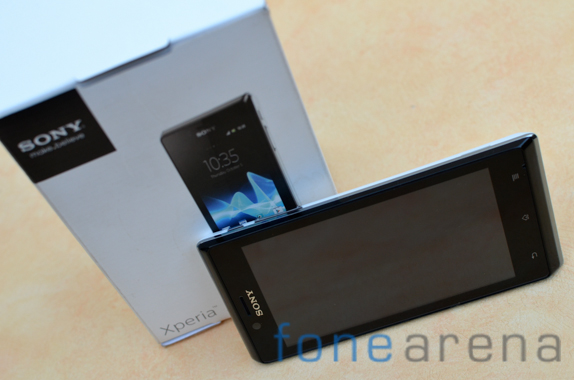 The front of the phone is dominated by a 4″ touch screen with a row of capacitive buttons located under it. One of the two notification lights can also be found here. The RGB light is hidden below the plastic and is of the RGB variety. 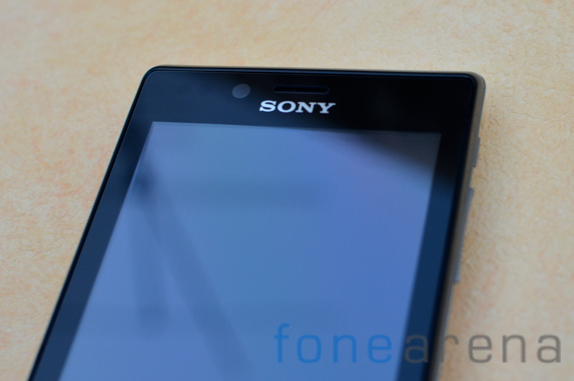 Up top you can find the front facing camera to the left of the earpiece alongside another LED which indicated charge status. 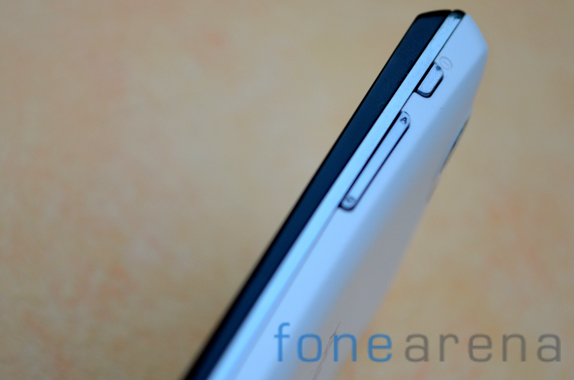 The right side of the phone has a power switch and a volume rocker. The keys have decent tactile feedback but we felt that they were a bit too small to be comfortable. The plastic keys and the silver rim around the handset are finished in a faux chrome finish making them extremely fingerprint prone. 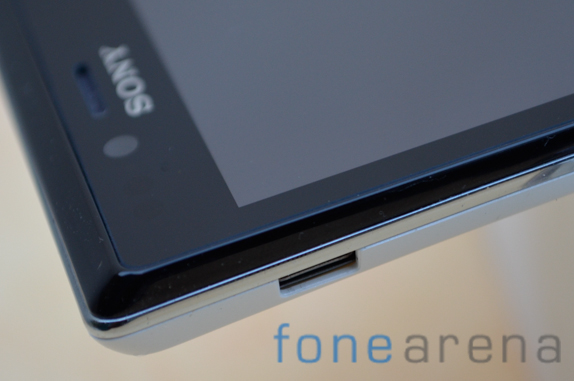 The left side of the phone only houses the microUSB slot while the top has a centered 3.5mm jack. 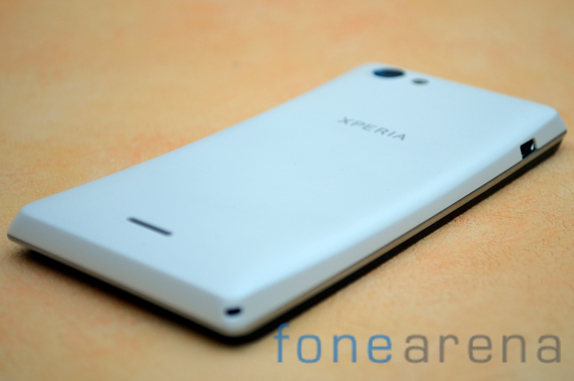 The back of the phone has a matte finish to it which further improves the grip. The 5MP camera can be found towards the left top corner surrounded by a chrome ring. A single LED flash is placed next to it. A speaker grille is located towards the bottom. There are no markings to indicate the model number of the handset though you do find the Xperia branding emblazoned on the upper half of the back. Connectivity wise you get the standard WiFi, 3G, Bluetooth and GPS. There’s a FM radio onboard the phone alongside RDS functionality.. The Sony Xperia J is equipped with just about 4GB of onboard storage and about only 3GB of that is available to end users. You do get a microSD card slot available so you can boost up the storage in the phone.

The Xperia J is equipped with a 4″ display which is about par for its class. The FWVGA resolution isn’t anything special but suffices on a 4″ display.The panel has a very natural color tone to it and has been well calibrated by Sony. The viewing angles are suitably wide. 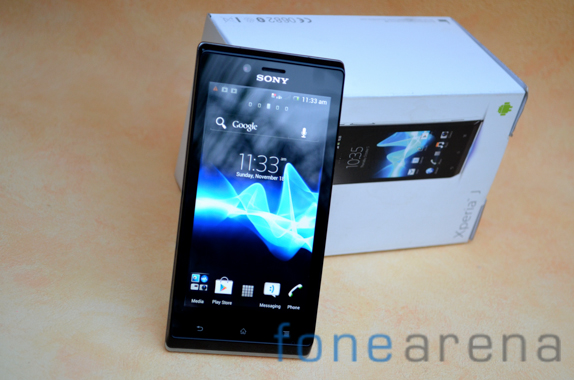 Brightness levels are rather fantastic and you shouldn’t have any problems viewing this screen in bright sunlight as well. A minor concern revolves around the lack of an ambient light sensor on the phone and the fact that you’ll have to manually adjust the brightness.

Like most of its contemporaries, the Xperia J too runs Android 4.0 and is expected to get an update to Jelly Bean sometime in 2013. The interface has been heavily skinned by Sony and comes with additional themes, widgets and a lot of social integration built in. 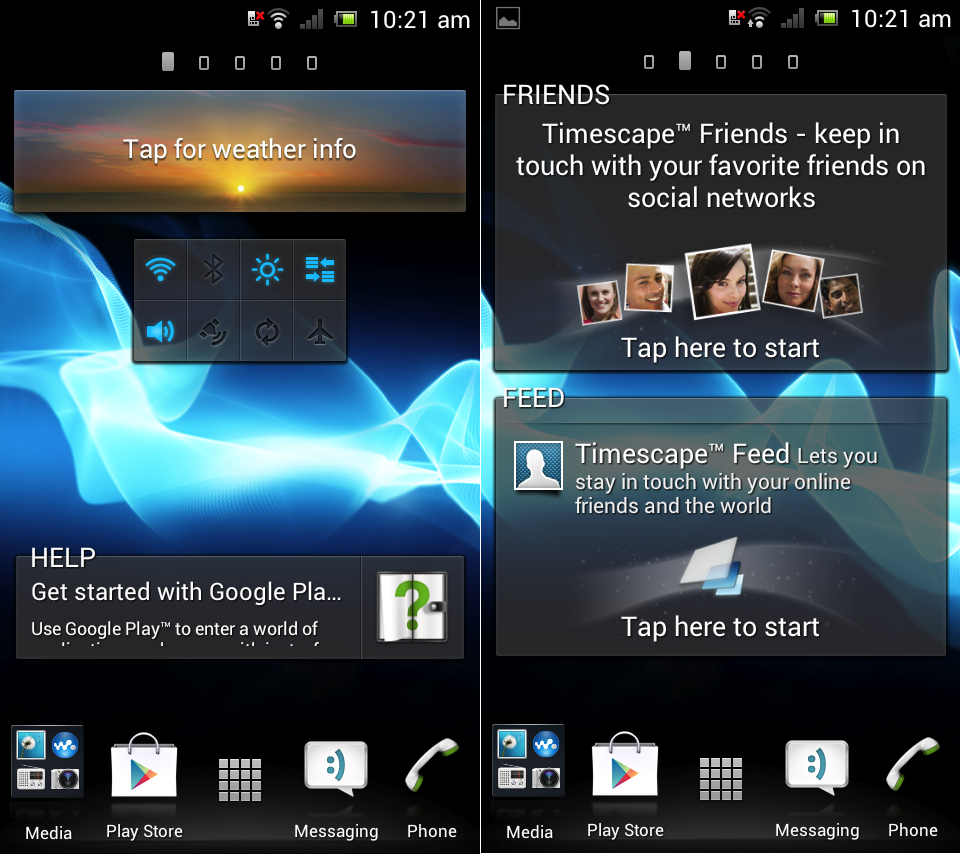 We’ve talked about Sony’s customizations in the past and the same get carried over to the Xperia J as well. The experience is decent and we couldn’t find too much lags in the interface itself though it does slow down a bit in the app drawer at times. We wouldn’t recommend loading up too many widgets though as that does seem to throw a wrench in the cogs. 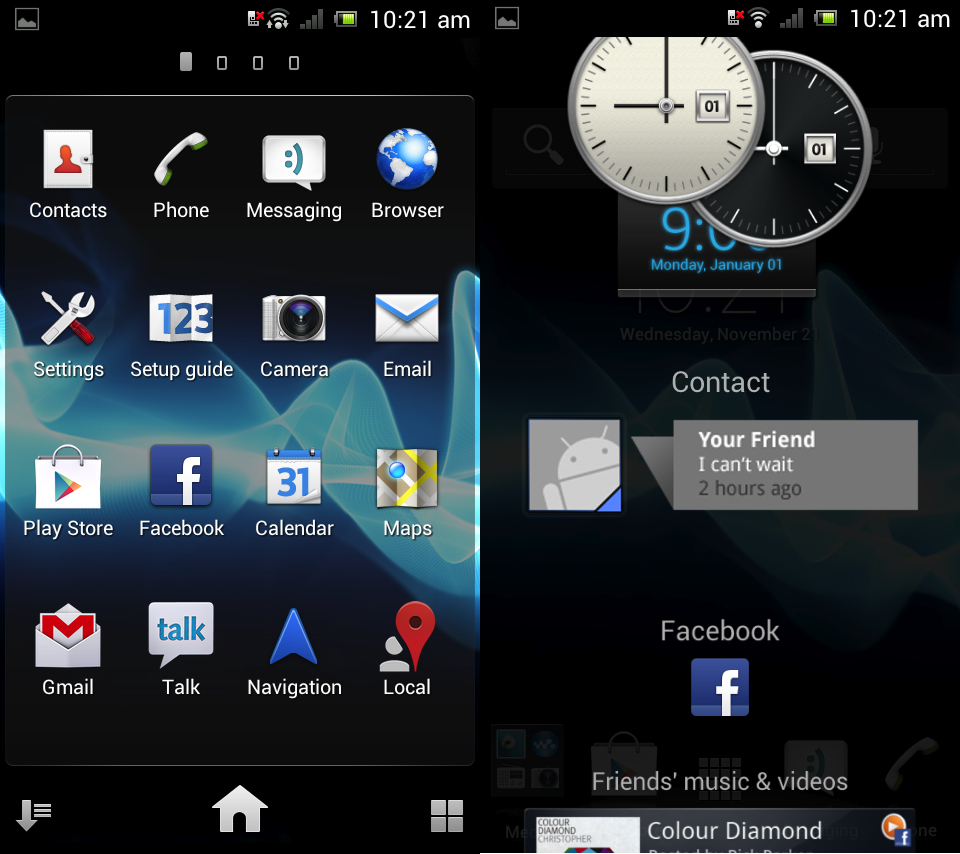 The Timescape widget aggregates your social feeds from Facebook and Twitter into once place allowing you to post on either from the home screen itself. This is just one of the several widgets preloaded by Sony. 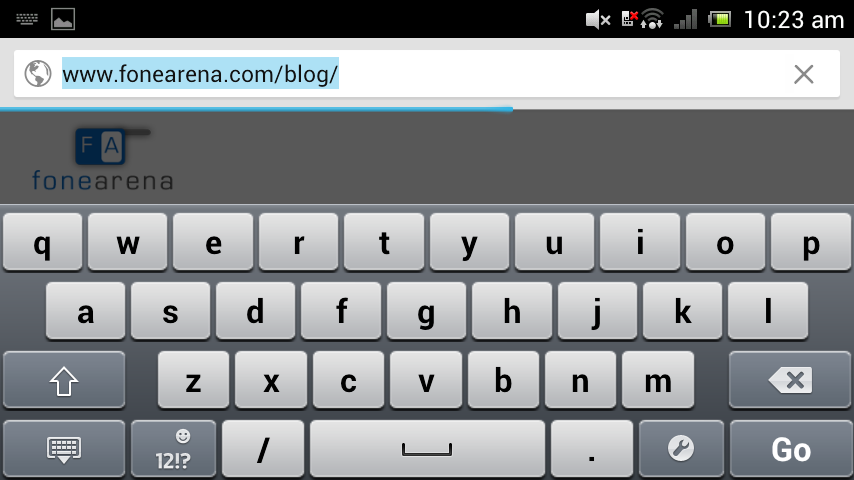 We weren’t big fans of the onscreen keyboard as it just wasn’t fast enough for us. The slow response coupled with the random lag means that you’ll have to look for an alternative. You shouldn’t have a problem with that though as the Android market place has several quality alternatives like SwiftKey and Swype. 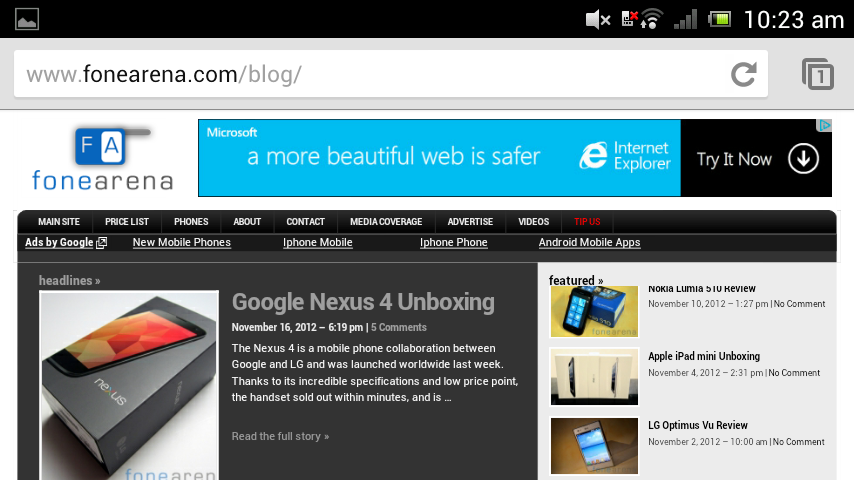 The web browsing experience on the Xperia J is fairly solid especially for a mid range device. Theres a bit of checkerboxing while loading and scrolling but things remain smooth for the most part. Particularly graphic intensive websites might cause lags though.

Powering the Xperia J is a Qualcomm Snapdragon MSM7227A chip coupled with Adreno 200 graphics which means you should expect strictly mid range performance here. Indeed, the phone often displays signs of lags when doing a bit of multitasking and even the keyboard struggles to keep up with fast typing. The phone is equipped with 512MB of RAM which is just about sufficient and is as expected for its smartphone tier. 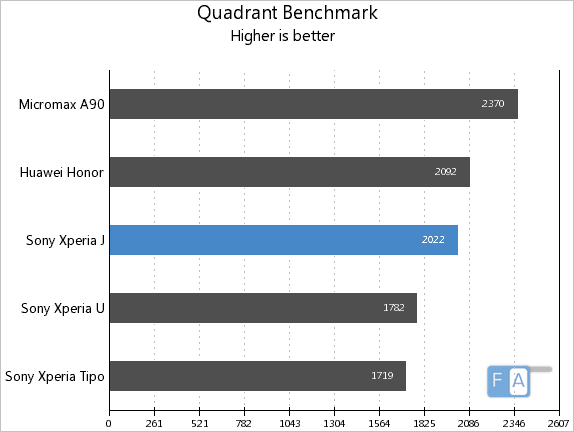 The Quadrant benchmark which is used to test CPU speed amongst other HW aspects shows us that the phone falls straight in the middle of its contemporaries like the Xperia U and the Micromax A90. 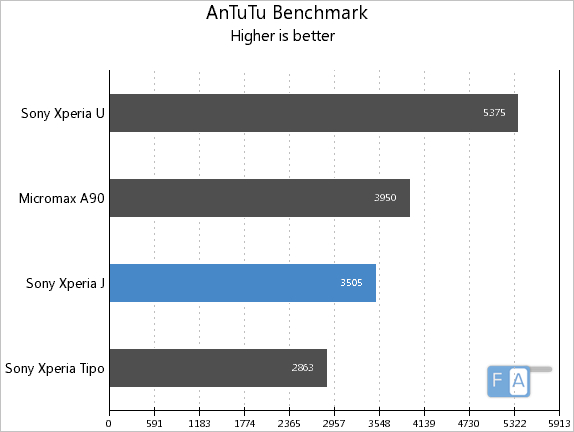 In the Antutu benchmark  again the performance is nothing extraordinary. The Xperia J is handily beaten by the likes of Xperia U.

The Xperia J is equipped with a 5MP auto focus camera. The camera unfortunately really isn’t all that great. We weren’t too happy with how the camera handled white balance. The phone struggles with focussing and images consistently ended up being blurry. 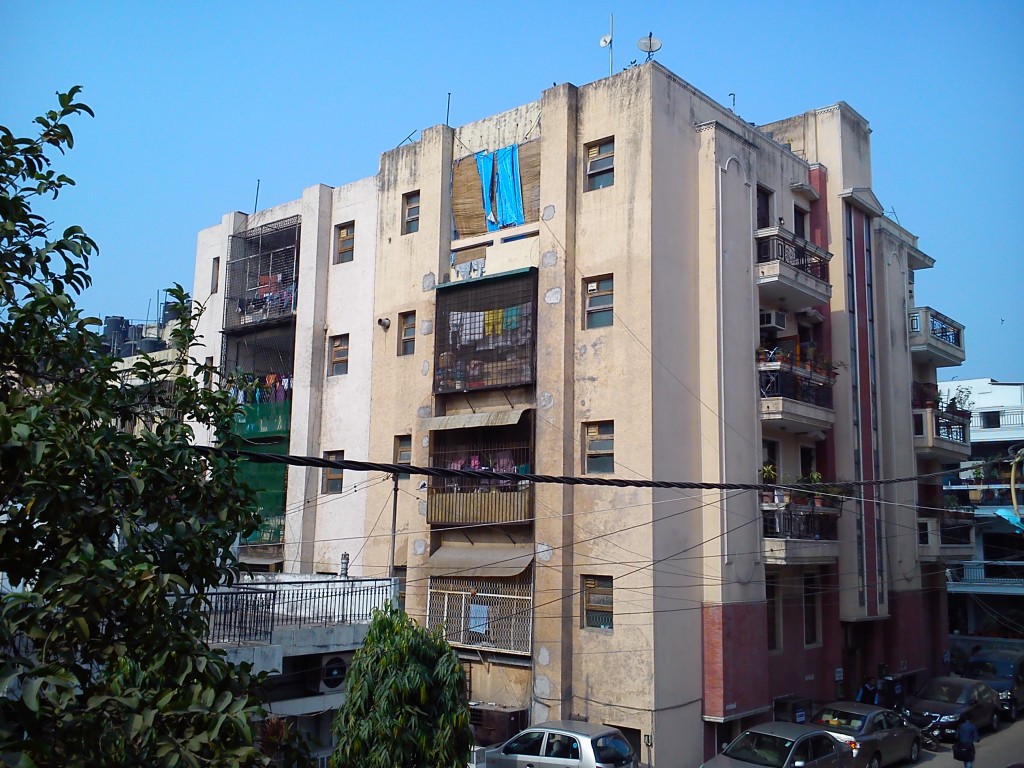 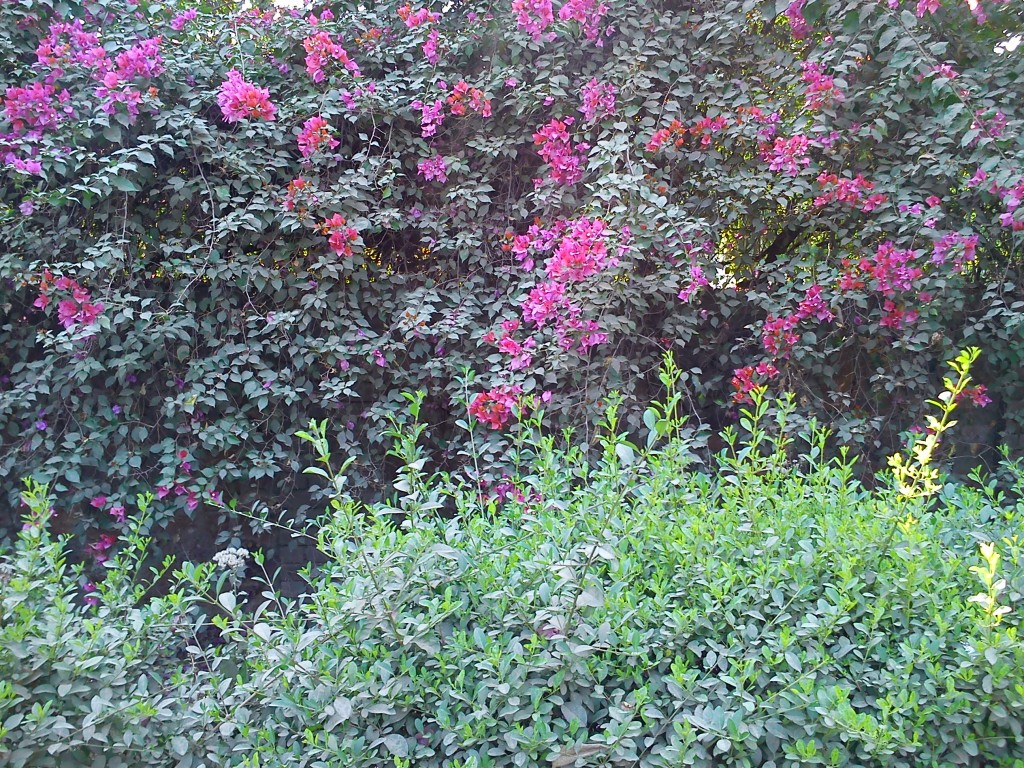 As can be seen above, the small sensor and agressive noise reduction means that you lose a lot of detail. 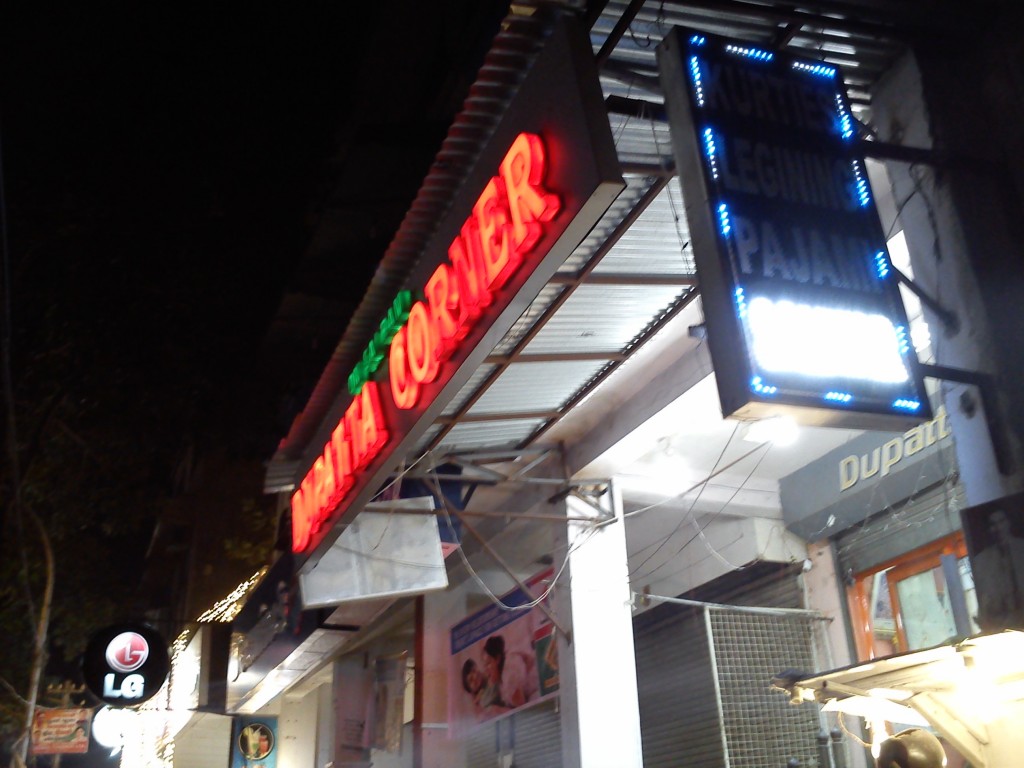 Low light performance is particularly bad and what’s more disappointing is the video recording performance. The phone records video in a resolution of 640×480 which is well below the standard for 2012. Continuous auto-focus on the camera works well though.

Battery Life
The Xperia J is equipped with a 1,750 mAh battery which should ensure great battery life. In our testing we easily got well over a day of usage out of the phone though your mileage will vary on the basis of your usage. Sony rates the standby time for 2 weeks and 7.5 hours of 3G talk time.
Conclusion
The Xperia J delivers a decent experience for a mid range handset but we weren’t too impressed by it. The rather good display and decent battery life do not make up for the lacking performance. 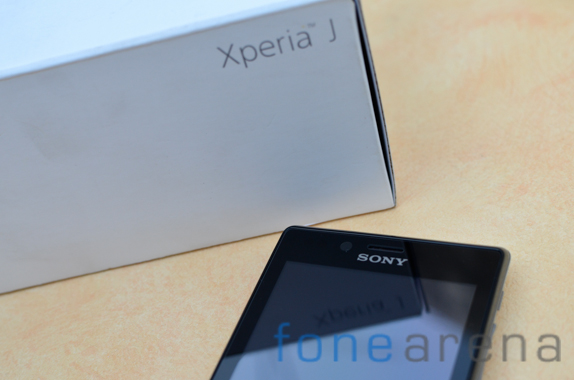 We can’t really recommend the Xperia J and feel that devices like the Desire X , Xperia U provide a more compelling experience. Go for the Xperia J priced at Rs. 18,399 only if a good display and decent battery are the main criteria that you’re looking for.Pros
Cons