Intel had been one of the earliest players in the mobile chip sphere with its Xscale line of processors for PDAs. Having sold the division to Marvell in 2006 , the company had for all practical purposes ditched mobile computing. 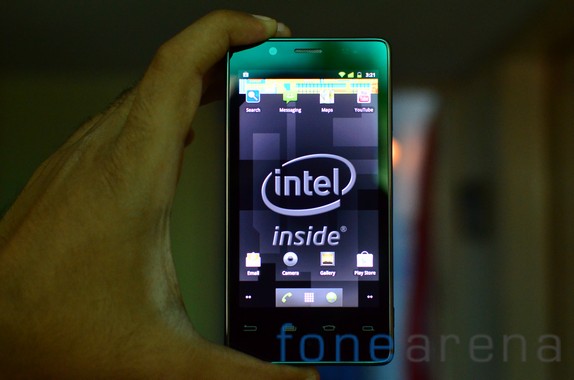 Then came their effort with Moorestown , based on the Lincroft system-on-a-chip with an Atom processor core, Langwell input / output Platform Controller Hub(I/O PCH), and a Briertown Power Management IC. However due to the lack of proper power management , video encoding and decoding among others meant that the SoC was not feasible for deployment in a phone. What it did lead to is the Medfield processor. This is a true x86 processor chip which will shipping in a number of devices by the end of 2012. Read on for our review on the first phone running Intel’s Medfield processor. 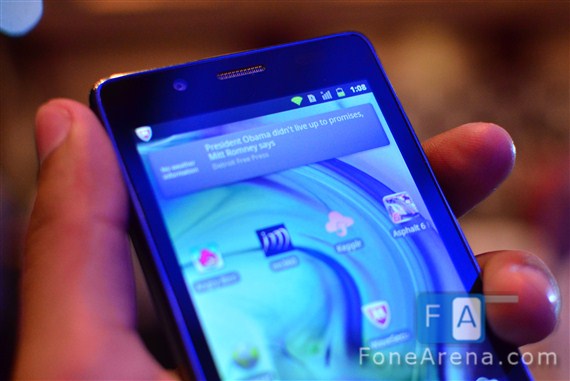 The Xolo X900 is absolutely identical to Intel’s Form Factor Reference Design (FFRD). The phone is fairly solid and we didn’t really find anything lacking in the fit and finish of the device. The design takes obvious cues from the iPhone , right from the chrome ring around the border to the general design direction among other things. A headphone jack and power / standby key can be found at the top of the phone. 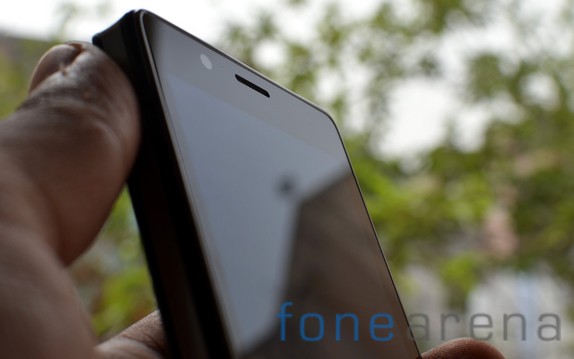 The front of the phone houses a 4” WSVGA (1024×600) screen which corresponds to about 300ppi. The screen looks great and touch sensitivity is top notch as expected from a device in this category. A 1.3MP front facing is placed above the screen. 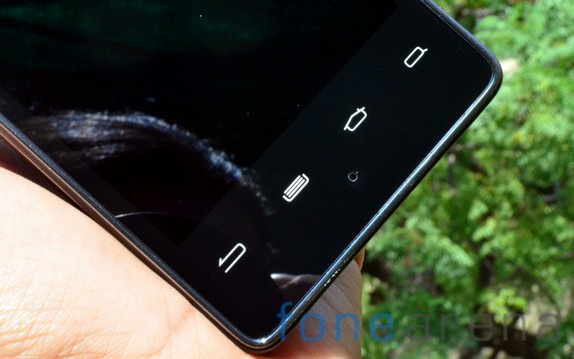 Below the screen are 4 capacitive touch buttons which are fairly responsive. 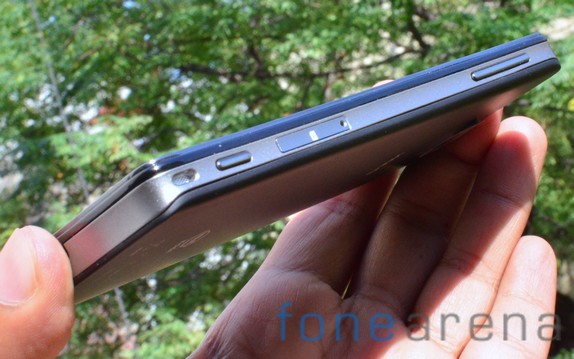 On the right side you can find a microSIM tray not too different from the iPhone. It requires the use of a similar tray ejector tool. Below the micro SIM tray is the dual stage camera key. Stereo speakers can be found on both sides at the bottom of the phone. 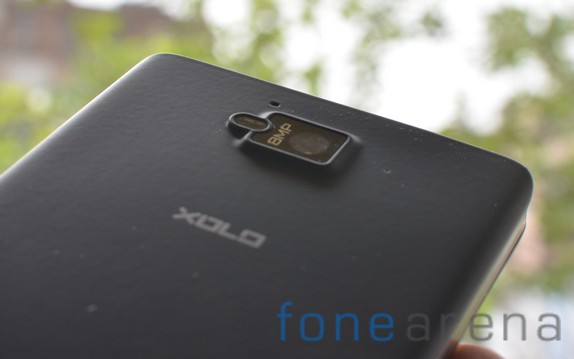 The back of the phone has a soft touch matte finish in contrast to the shiny gloss up front. An 8MP camera can be found up top along with an LED flash. A secondary microphone for noise suppression. 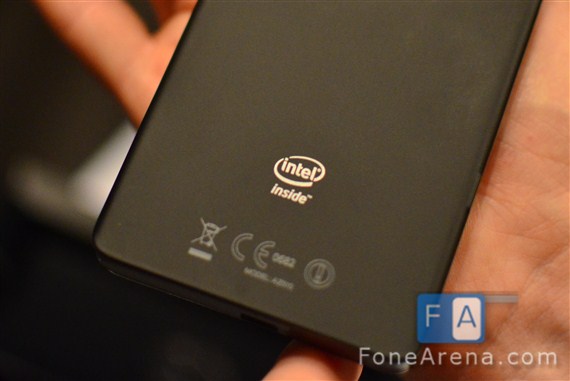 Overall the phone feels just about average in the hand. The plastic clad body is nothing worth writing home about and the soft touch finish at the back is a smudge magnet and isn’t particularly easy to clean either. The deceptively light body does not feel too reassuring.

The X900 runs on the Atom Z2460 32nm SoC which has a Saltwell core running at a max of 1.6Ghz with 512Kb of L2 cache. The graphics core is a PowerVR SGX 540 running at 400Mhz. All these combined make it a compelling platform capable of competing with modern smartphones running on the Tegra 3 and Qualcomm S4 platforms. 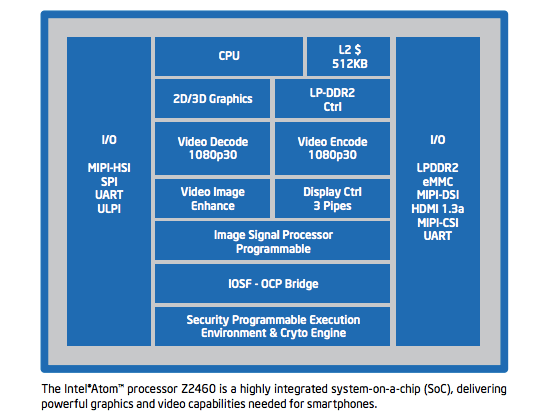 In terms of web browsing , Javascript performance is class leading. This is particularly impressive as the Xolo X900 runs on Gingerbread while its competitors are already on Android 4.0 which further boosts performance. 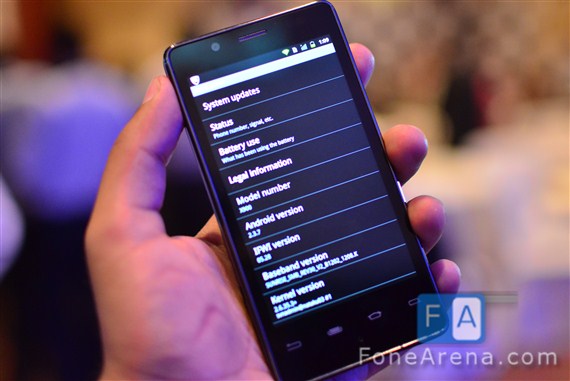 Over all the XOLO X900 was one of the fastest phones we’ve ever tested falling just short of the HTC One X in benchmarks. This is no small feat considering that the Atom chipset powering the X900 is a single core chip competing with the quad-core Tegra 3 chipset. The XOLO X900 is capable of playing back full HD video content without breaking a sweat. 3D gaming performance is also top-notch without any frame drops as such.

The phone has 8MP auto focus camera at the back and 1.3MP front facing camera. The 8MP rear camera does a good job that also takes 10 shots in less than a minute at 15 fps in Burst mode. 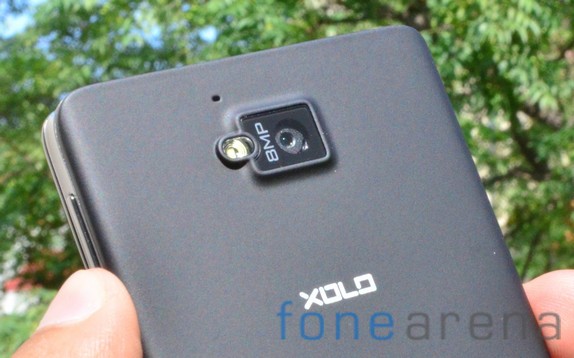 You just need to swipe from left to right in the camera mode to get the setting menu. You can adjust the burst mode length to 1,3,5 and 10 and FPS settings accordingly.

There are different scene mode such as Auto, Sports, Portrait, Landscape, Night, Night Portrait, Fireworks and Text. and Focus modes such as Auto, Infinity, Macro and Touch (Touch to focus). We tried Auto and Fireworks mode and the image turned out well, which you can see in the sample shots below. The images in macro mode didn’t turnout pretty well.

You can adjust ISO settings manually ranging from 100 up to 800 and manually adjust lots more settings including shutter speed, Auto Exposure, Anti banding and lots more. The custom camera options you set doesn’t change when you exit the camera and use it again. You can reset the camera settings. You can switch between either cameras from the icon below and can also switch to video recorder that supports Full HD 1080p video recording up to 30fps. The video quality is fine and the video is recorded only in .3GP format that takes up about 60MB for a 30 second video. You can also change the white balance, apply some color effects while shooting.

Here is the 1080p video sample

Here are some benchmark results to show the performance of the Intel Medfield processor. 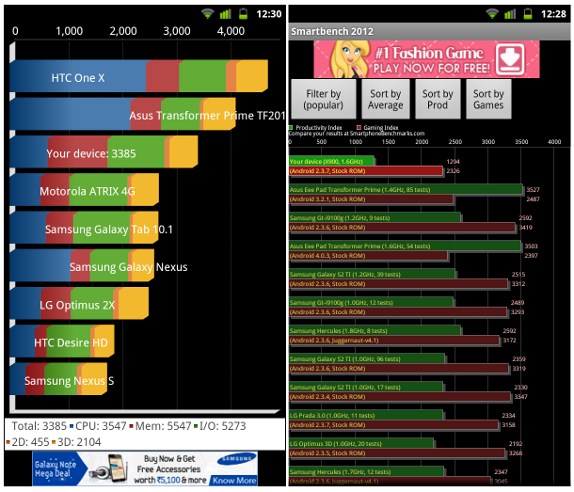 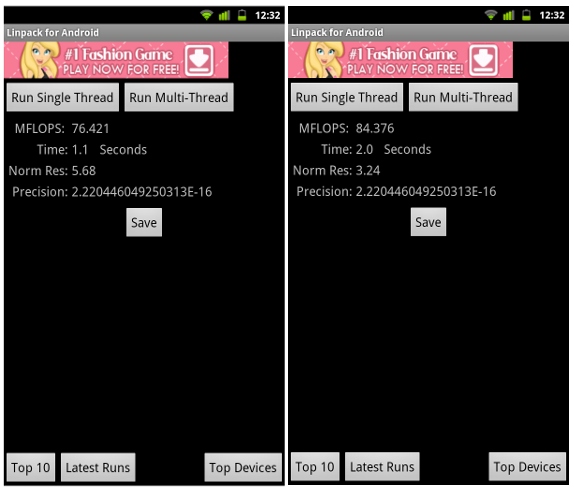 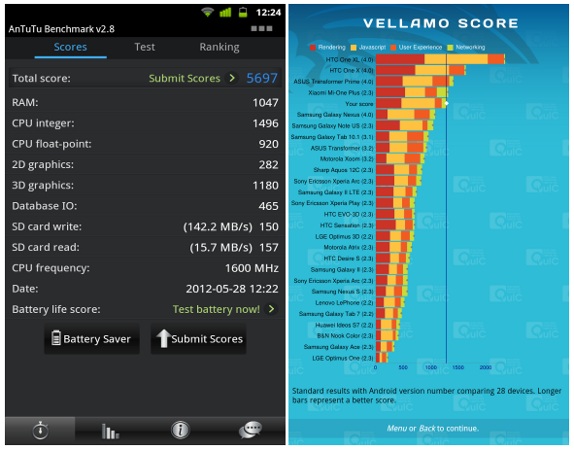 The XOLO X900 proves that Intel can have a compelling offering running on the Android platform. As their first device , the X900 does not break any records but offers a stable , almost pure Android experience on a platform which performs as well as any other out there. Due to the architecture change , there will be compatibility issues even though Intel has worked to minimize this. It is now available in the market for about Rs. 22,000.

Srivatsan also contributed to this Review