An AT&T branded Galaxy Note was already caught at FCC a few days back and this new leaked images are proof that Galaxy Note will be coming to AT&T around next month. Pocketnow was successul in somehow managing an image from the press release and we can clearly see the AT&T logo in the front of the device. 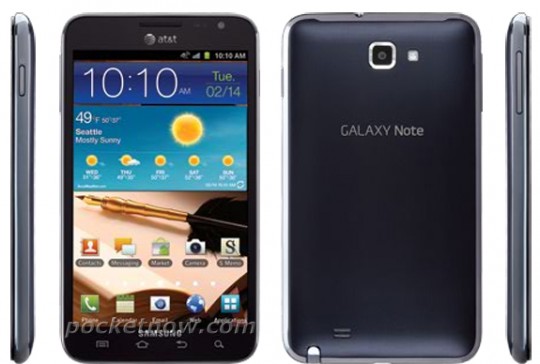 The 5.3″ Phone/tablet has been released in any countries including India and has registered quite impressive sales and now finally it will be launching in the U.S market, so all the people wanting a powerful tablet which can also act as a phone can wait for the Galaxy Note. The Galaxy Note also supports a stylus and best for browsing, designing, taking notes, etc. It comes with a 1.4 GHz dual core processor, 32 GB of internal storage, front facing camera, Android 2.3. According to the image we will be seeing an early February launch.