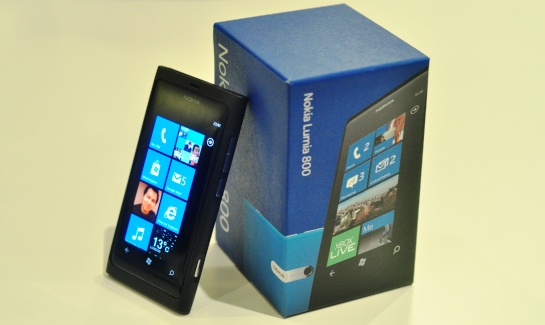 The Lumia 800 we were given are pre-release prototypes. I was told that the retail boxes will be similar, but do not be surprised if the contents change come release day. In addition to the phone itself, you will find a USB wall adaptor (mine came with an European plug, but expect to see the correct version for your country), microUSB cable and a pair of head-set inside the compact blue box. The head-set are of the none in-ear version. Finally, Nokia has also included a very neat looking case.

Readers here will likely be already familiar with the Nokia Lumia 800, but to recap, Nokia’s first ever Windows Phone 7 device runs on the Mango variety. Inside the single piece polycarbonate you will find a 3.7″ WVGA AMOLED display with Clear Black technology, a single core 1.4 GHz Qualcomm processor with hardware accelerator, 512MB RAM, 16GB storage and 8MP AF camera with Carl Zeiss optics. I can confirm that the screen uses a PenTile sub-pixel matrix, as seen previously on the Galaxy S and the upcoming Galaxy Nexus.

A review of the Lumia 800 is being worked on. In the meantime, do enjoy the unboxing video.