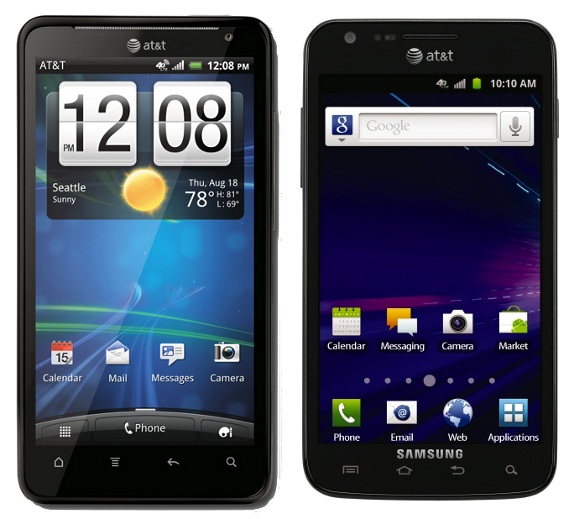 AT&T has announced their first LTE phone lineup with HTC Vivid and Samsung Galaxy S II Skyrocket that would be available from November 6. These smartphones uses both the LTE and HSPA+ 4G for a consistently fast connection in and out of LTE areas. The HTC Vivid has dual core 1.2 GHz processor 4.5-inch qHD display and the Samsung Galaxy S II Skyrocket is powered by 1.5 GHz dual core processor and has 4.5-inch SuperAMOLED Plus display. Both these phones run on Android 2.3 (Gingerbread).

The HTC Vivid has an 8MP camera with f2.2 28mm wide angle lens for low light photos and 1080p HD video recording at 60 FPS, 16 GB internal memory that is expandable up to 32GB with MicroSD.

The Samsung Galaxy S II Skyrocket comes with an 8MP rear-facing camera with LED flash and 1080p HD video recording and a 2MP front-facing camera, 16 GB internal memory that is expandable up to 32GB with MicroSD.

The HTC Vivid and the Samsung Galaxy S II Skyrocket would available from AT&T company-owned retail stores and online Nov. 6 for $199.99 and $249.99 respectively with a 2 year commitment.