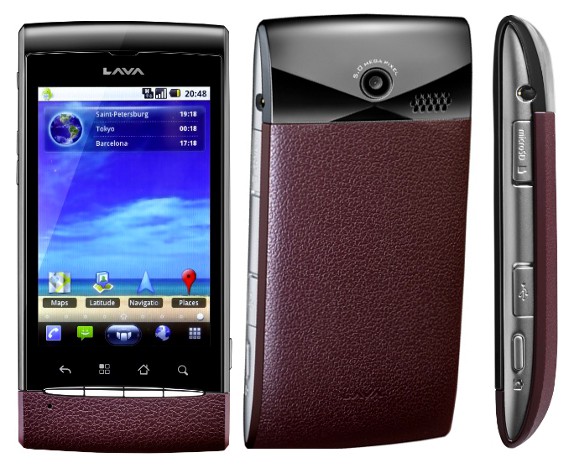 Lava mobiles has launched their first Android Smartphone, the LAVA S12 that is powered by Android 2.2 (Froyo). It is a sleek phone which is 13.5mm thick and has matte leather finish with rounded top and bottom edges. The hard keys and edges  have metallic silver finish. It features  600MHz  Qualcomm processor and has 3D home screen UI which is customizable that has unique smart folders and a rich set of animated 3D widgets.

It has 3.2-inch (480 x 320 pixels) capacitive touchscreen display, 32GB expandable memory (2GB in the box) , 3G (up to7.2Mbps), Wi-Fi and Bluetooth, 5MP fixed focus camera with digital zoom. It comes with 1300mAh battery. Other than the Google apps such as Gmail, Google Maps, and Google Chat, it also comes with Social Networking apps like Facebook, Twitter and Nimbuzz.

Some of the other pre-loaded apps include, Times of India and Moneycontrol for business and news, Hungama MyPlay, Saavn, TuneWiki and YouTube for entertainment, Office Suite (for PDF, MS Office 2010) and Advanced Task Killer. It also comes with one year subscription of Zenga Mobile TV absolutely free to watch TV channels on the move. It has SlideIT keyboard for easy input.

The Lava S12 is priced at Rs. 9,999 and it would be available in at all leading stores and e-commerce portals across India.