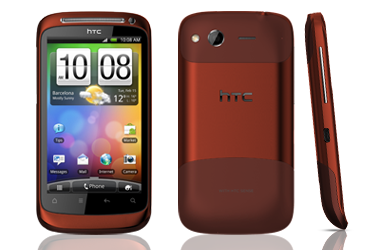 HTC Desire S was announced by HTC at MWC and it’s already available for purchase in UK and other countries. We recently reviewed it and we told you that it’s an amazing device. Yesterday, we told you that AT&T will be launching Inspire 4G in red color via RadioShack. Now it looks like HTC is in love with red color because Vodafone UK has officially launched Desire S in red color, and the phone looks really hot. It looks like maroon in the image above, but it’s actually red in color. The phone really suits Vodafone UK because red is Vodafone one of main theme colors. If you are in love with this hot red Desire S, then you can get it for free on selected plans starting from £30 per month, or you can pay £99 and get it for monthly rate of £25.

Well folks, do you think the Desire S looks good in red color?