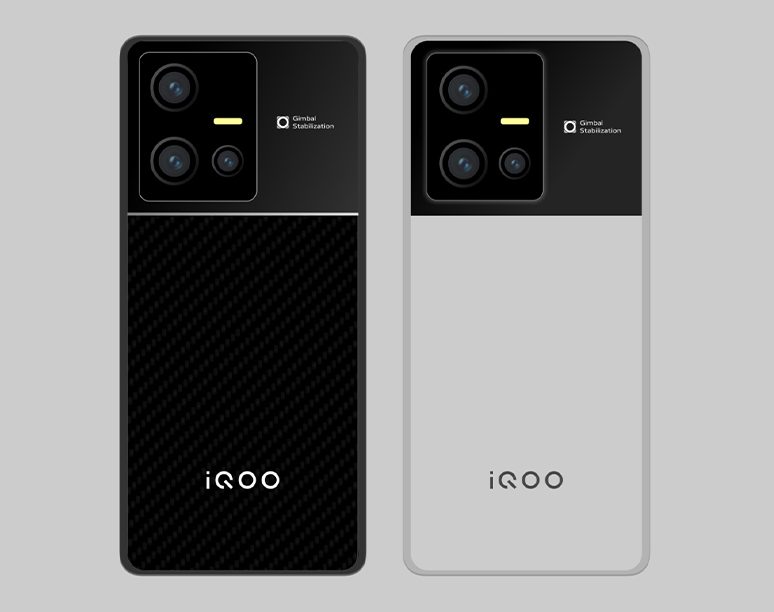 It is expected that the iQOO 10-series will make its debut in China in the month of July. The iQOO 10 series will consist of two models: the iQOO 10 and the iQOO 10 Pro. And now, a fresh leak has been discovered online that displays the overall design, camera setup, and color possibilities of the soon-to-be-released iQOO 10. This past February, the iQOO 9 series was launched in India.

Renders of the iQOO 10 that were leaked reveal that the two color options are black and white. The camera system on this phone is contained within a square camera area that also includes an LED flash. We can notice a text and icon for gimbal stabilization located just next to the camera region. The iQOO brand name is printed on the bottom of the rear panel of the iQOO 10. The white color model of the iQOO 10 lacks the textured fiber stripes found on the black color model; instead, it has a simple appearance.

According to leakder digital chat station, the iQOO is testing the Dimensity 9000+ CPU, and the iQOO 10-series will be the first to include a smartphone that is powered by a Dimensity 9000+ processor. The Dimensity 9000 was somewhat outperformed by the most recent MediaTek platform. It features upgrades to the signal processing and 5G modem in addition to a slight CPU and GPU increase. The high-performance Cortex-X2 core has a frequency range of 3.05 to 3.2 GHz, and the Taiwanese chipmaker said that the platform would be available in smartphones as early as Q3.

As per the leaked report, the iQOO 10 will have a 6.78-inch Full-HD+ LTPO OLED display with a single-hole for the selfie and feature a 120Hz refresh rate and DC dimming. The iQOO 10 will be powered by the flagship octa-core Qualcomm Snapdragon 8+ Gen 1 CPU, while the Dimensity 9000+ processor is touted to be on the Pro model, with up to 12GB of RAM and up to 120W/200W fast charging on the pro model. A 50MP 1/1.5″ primary camera is one of three cameras that are mounted on the back of the iQOO 10-series.

The iQOO 10’s specifics, including its price and release date in India, are still unclear. In the days ahead, more information about the device will be awaited.