Bharti Airtel has announced a new corporate structure to tap into the digital opportunity in the country. The new structure envisages Airtel Digital Limited folding into the listed entity, Bharti Airtel. 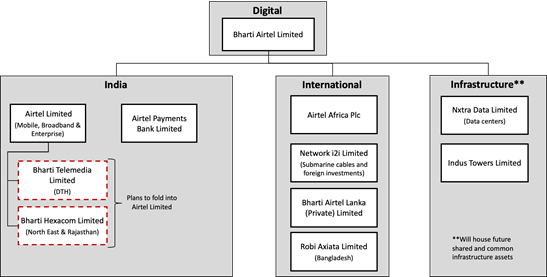 Airtel Limited, a wholly-owned subsidiary of Bharti Airtel Limited, will house all the telecom businesses. Bharti Telemedia, the 100% arm operating DTH services will sit alongside Airtel Limited, for now, says the company. It is intended to eventually fold the DTH business into Airtel Limited to move towards the NDCP vision of converged services to customers.

Airtel Payments Bank will remain a separate entity under Bharti Airtel, clarifies the company. All the company’s infrastructure businesses such as Nxtra and Indus Towers will continue to remain in separate entities as they are currently. So will international subsidiaries and affiliates.

The new structure sets the exciting future course for Bharti Airtel and provides focus on the four distinct businesses – Digital, India, International and Infrastructure, each, in a razor-sharp way. We believe this will provide agility, expertise, and operational rigour to serve our customers brilliantly while providing flexibility to unlock value for our shareholders. This structure will serve us well over the coming years and is a win-win for all stakeholders.