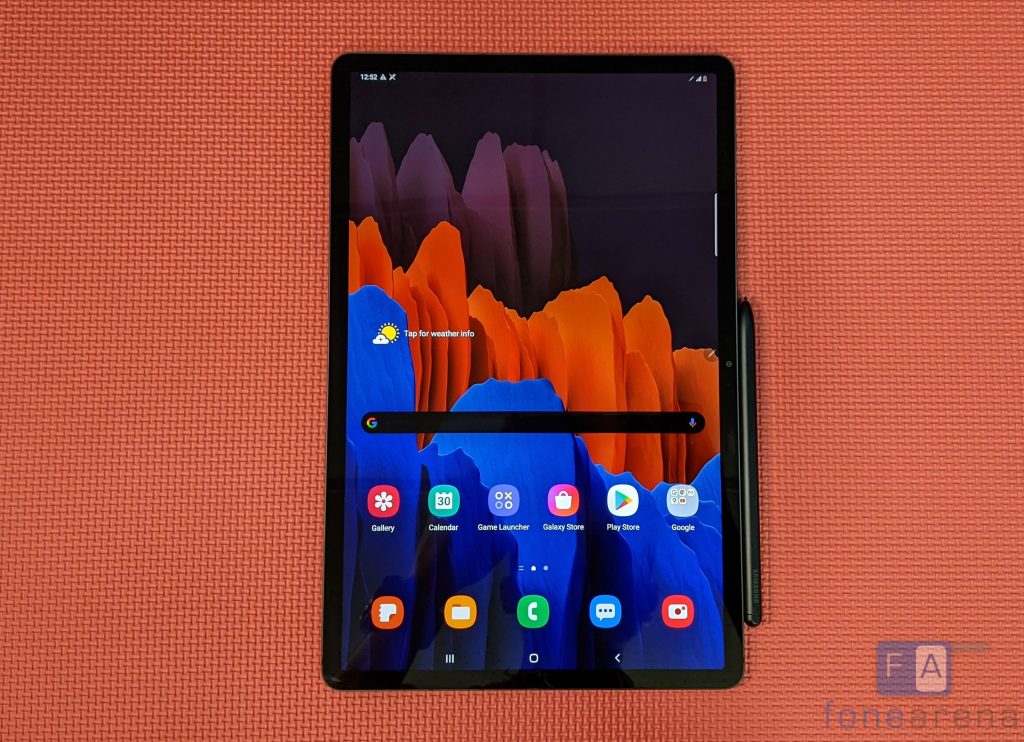 Alongside the Galaxy Note 20 series, Samsung announced Galaxy Tab S7+ featuring S-Pen and a gorgeous 120 Hz refresh rate screen. Equipped with a power-packed specification, is Galaxy Tab S7+ a best Android tablet already? Does it justifies the 79k price tag? Check out in our review.

The Galaxy Tab S7+ isn’t your usual big-screened device! It has a huge potential to replace your laptop, thanks to Samsung DEX mode. The Tab S7+ comes with minimum bezels and an aluminum frame. The tablet looks and feels great with flat side edges and rear panel. The fit and finish and paint job are perfect. However, it feels a bit heavy at 575grams and huge to use. On the top, we have a power button/screen lock, volume rocker, SIM card tray, and microphone. On the right, we have a USB-C port along with antenna bands. Four speakers tuned by AKG are present on the four corners. The bottom houses a pogo pin to attach the keyboard. Turning back, we have a dual-camera module with an LED flash and a dedicated magnetic strip for the S Pen stylus. The magnet is strong enough to hold the S-Pen, however, I was worried about losing it at times. 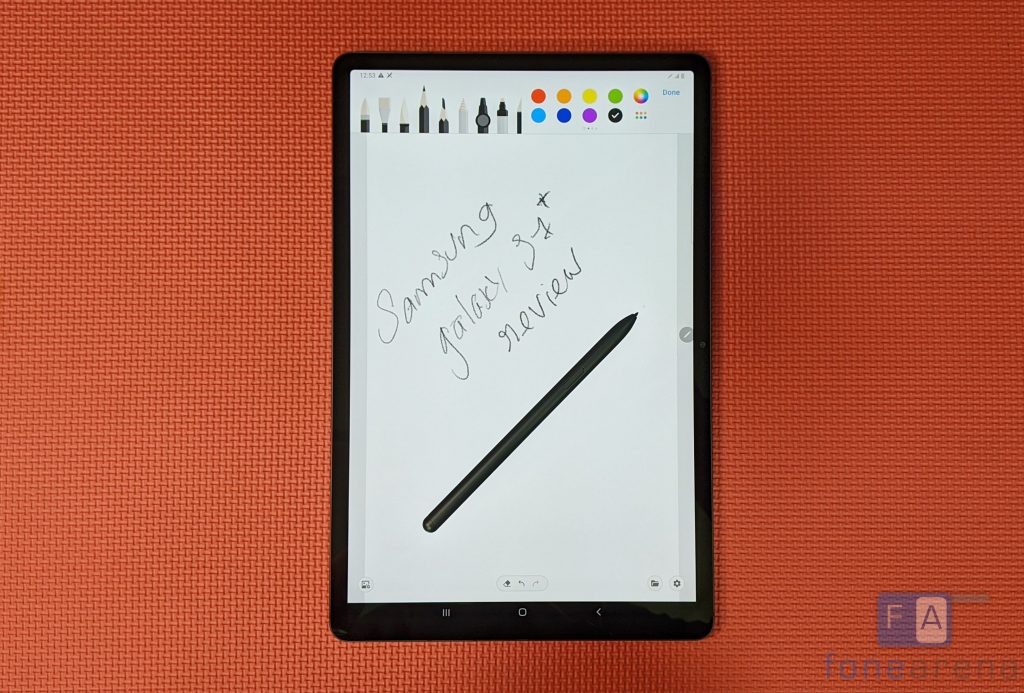 The Samsung Galaxy Tab S7+ sports a 12.4-inch (2800 x 1752 pixel) WQXGA+ 120Hz Super AMOLED display. The interface and transitions between apps are smooth and fast, viewing angles are great, text looks sharp, and colors are vibrant. The 120Hz refresh rate can be disabled in settings. It has HDR10+ features and supports content on popular apps including Netflix, YouTube, Amazon Prime Video. The Widevine L1 DRM certification is supported as well, which means you can enjoy quality video content across all the services. However, the battery drains a bit faster if you use it on 120Hz all the time. 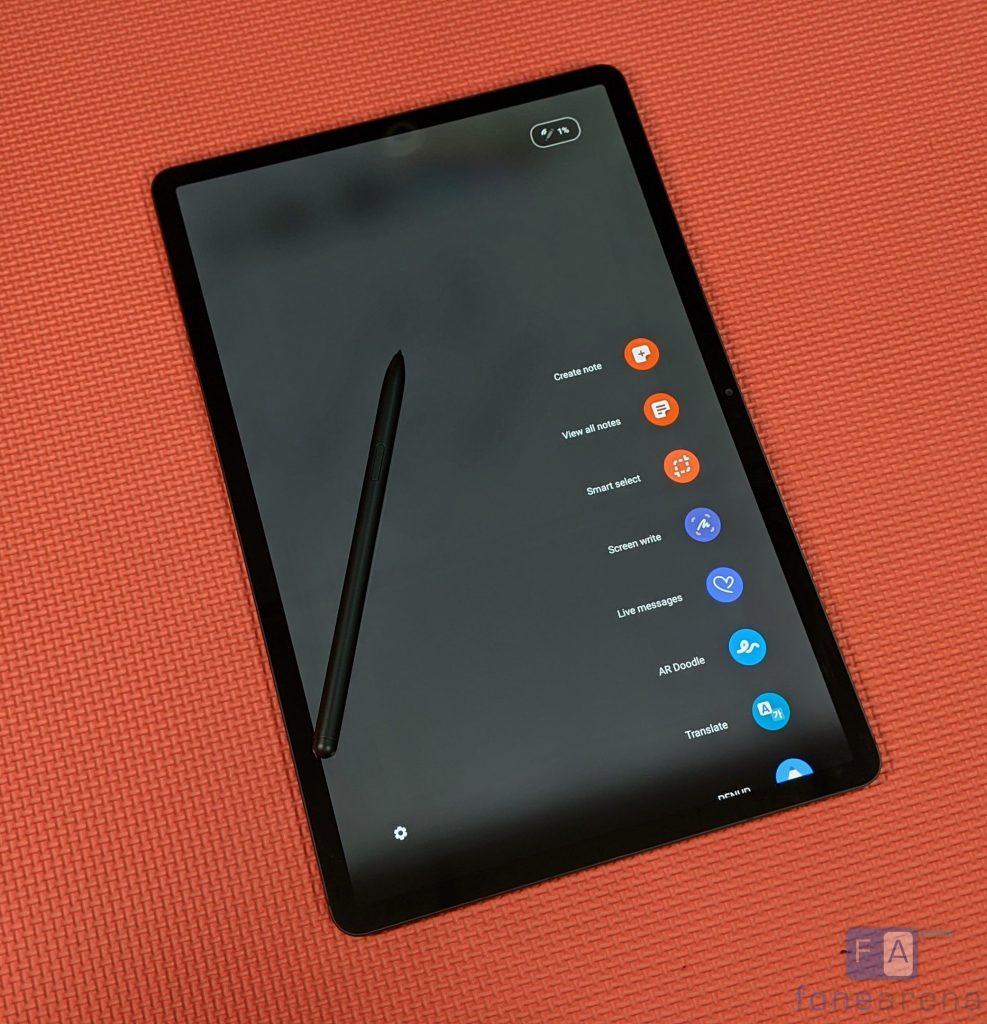 The Galaxy Tab S7+ is powered by the latest Octa-Core Qualcomm Snapdragon 865 7nm Mobile Platform with Adreno 650 GPU under the hood. This chipset support 5G and has a dedicated X55 modem. Overall, the performance is incredibly fast. In our experience, we experienced zero lag, zero hitches. In terms of storage, it comes in 6GB RAM with 128GB storage / 8GB RAM with 256GB storage, expandable memory up to 1TB with microSD.

The Samsung tablet is powered by Android 10 with One UI 2.5 out of the box. As advertised, we can use the tablet in two different modes – Tablet and Dex mode. The tablet version looks more like an enlarged version of mobile UI with some minor adjustments to suit the big screen. Just like Samsung smartphones, you get a dark-mode, secure folder, kids-mode, and much more. The overall UI experience is smooth and user-friendly. It also comes with pre-installed apps from Samsung’s and Microsoft’s. Moving on, the Dex mode gets automatically activated when you attach the keyboard to it. 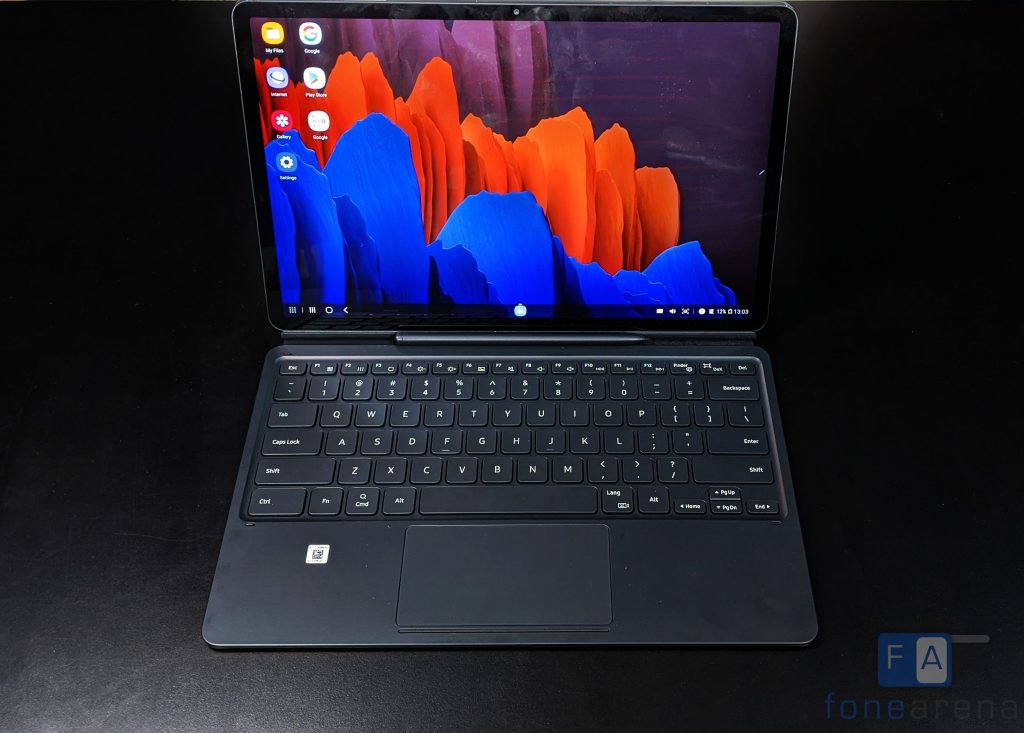 As you can make out from its name, this mode makes S7+ a full-blown desktop with a layout similar to Windows 10. In this mode, we get a Taskbar, which houses currently opened/using apps. Notably, there are options to hide it as well, if you are not a fan of keeping your home screen congested. Further, the taskbar contains the app drawer and navigation shortcuts on the left, the currently used active apps in the middle, and the status bar on the right. Moreover, you can pair the keyboard and mouse through Bluetooth as well. It’s worth mentioning that, Tab S7+ can replace your laptop for most of the day-to-day tasks, thanks to Snapdragon 865+ mobile platform. It supports wireless DeX mode as well. 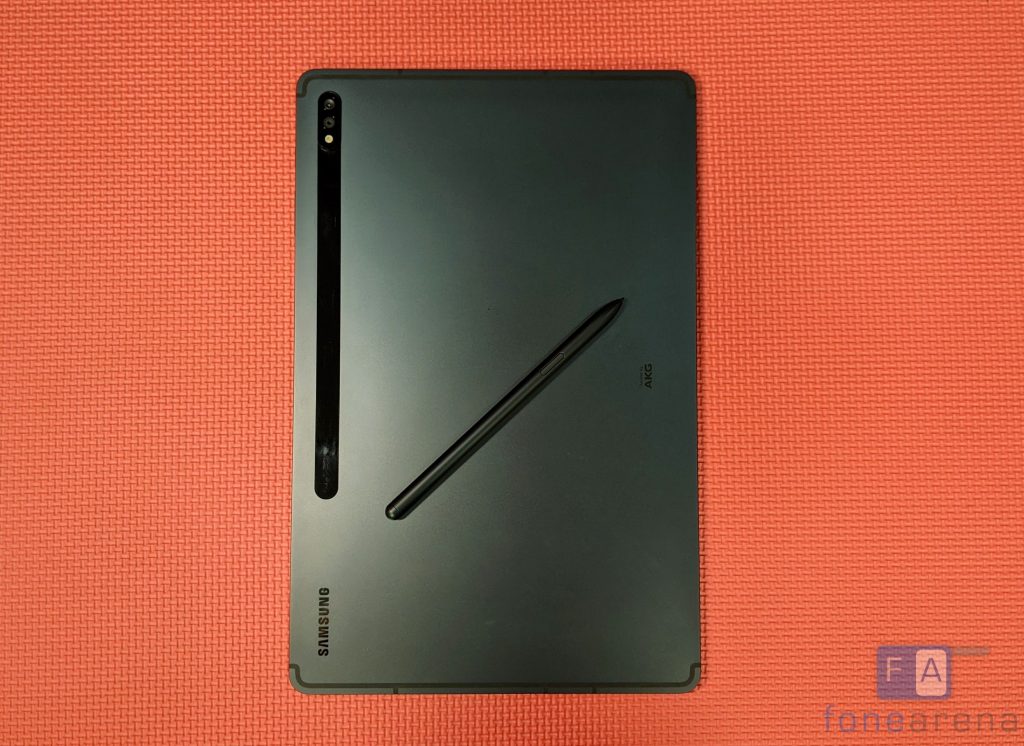 The Galaxy Tab S7+ comes bundled with S-Pen as usual and this time with low-latency support in selected apps. Well, the S-Pen that comes with S7+ is usually bigger than Galaxy Notes’. The S-Pen has a matte finish and feels comfortable to hold. It also features a button that can perform various tasks depends on the app. A range of S-Pen functionalities can be accessed once you tap the always-visible S-Pen shortcut. As per the company claims, 9ms low latency is available in the Samsung Notes app and calendar. In our overall experience, the S-Pen worked flawlessly right from low-latency scribbling to air-gestures. The S-Pen plays a crucial part when it comes to the overall tablet experience and as a package. 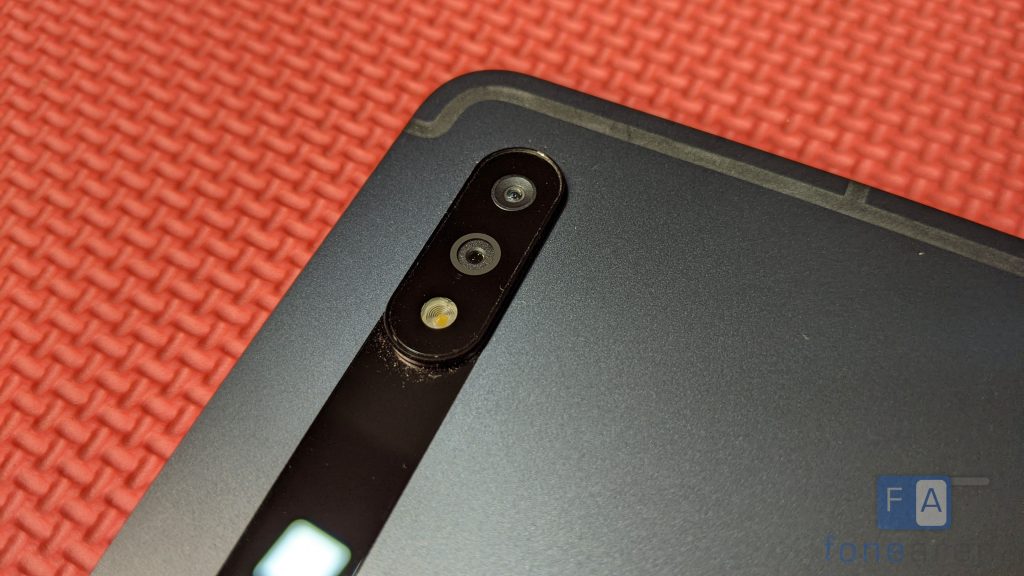 The Samsung Galaxy Tab S7+ packs a dual-camera setup — 13MP camera with f / 2.0 aperture and a 5MP 123-degree ultra-wide secondary camera with f/2.2 aperture on the rear. The 8MP camera takes care of the front selfies. Unlike smartphones, you get just a single LED under the camera module. The camera app is the same as any other Samsung smartphone. Coming to the quality, the primary camera captures some very good photos with fine details. Most of the time, pictures churned out from the main sensors were sharp, had good colors and accurate exposure. The wide-angle camera also did a good job with regard to colors and HDR. Portrait mode works well with good edge detection, misses at times though. Under low-light conditions, the tab produces an average output with enough light around. The front camera offers better selfies with enough details and punchy colors. Being a tablet, the device has done a good job in the photography department. Check out some samples below:

In terms of connectivity options, we get 5G SA/NSA, 4G LTE, Wi-Fi 802.11 ax, Wi-Fi Direct, Bluetooth 5.1, GPS + GLONASS, Beidou, Galileo, and USB Type-C. The in-display scanner is snappy and fast, one of the best in the tablet market at present. The Galaxy Tab S7+ has four very loudspeakers tuned by AKG and with support for Dolby Atmos. The speakers get louder and at the same time retains the audio quality at peaks.

The Galaxy Tab S7+ is powered by a 10,090mAh battery with 45W fast charging. However, we get just a 15W charger in the box. We almost got a day of battery life on casual usage involving casual web-browsing, streaming on Amazon Prime, and YouTube. With the keyboard cover, we got around 7 hours of battery since it also draws power from S7+ battery.

At Rs. 79,999, Samsung Galaxy Tab S7+ is the best Android tablet you can buy right now if you want a mix of everything. In the mid and top-end tablet market that is dominated by iPads, the Tab S7+ is a ray of hope for Android enthusiasts. It checks all the departments right from hardware to display to and not-so-great cameras. You can get it on Flipkart, Samsung India online store as well as offline store.