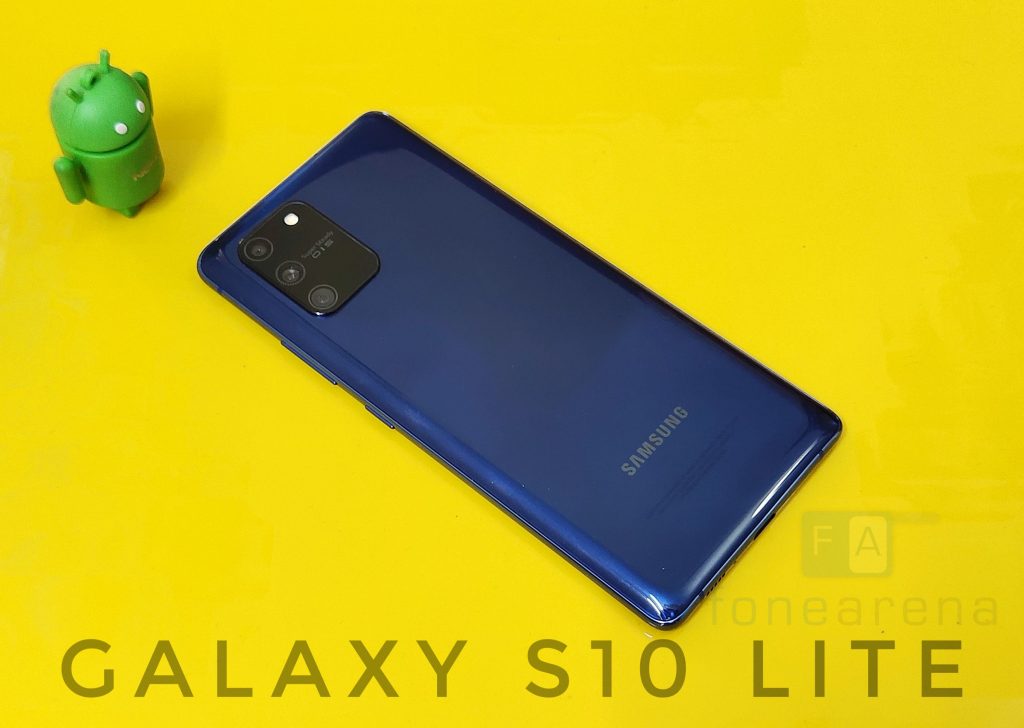 Before getting started with the review, here’s a quick recap of the specifications

The design of the Galaxy S10 Lite is largely different from the Galaxy S10 and is rather similar to the Galaxy A-series smartphones. For starters, the triple rear cameras are housed in a rectangle module and the front-facing camera is housed in a centred hole-punch. Next up, the back is made of Glasstic, which is essentially a glossy plastic panel that looks similar to a glass panel, and this time the headphone jack is gone as well.

The button placements and ports are a usual affair. The volume rockers and the power button is placed to the right, USB Type-C port, primary microphone, speaker grille is located to the bottom, Hybrid SIM tray to the right, and the secondary microphone to the top.

Having said about the design, let’s see what I liked and what I disliked about the Galaxy S10 Lite.

What I liked about the Samsung Galaxy S10 Lite?

After a long time, Samsung has launched a phone with Snapdragon SoC in India, and this time it is the Octa-Core Snapdragon 855 Mobile Platform built on the 7nm architecture. The cores are clocked at 2.4GHz + 1.7Ghz paired with 8GB LPDD4x RAM and 128GB UFS 2.1 storage. 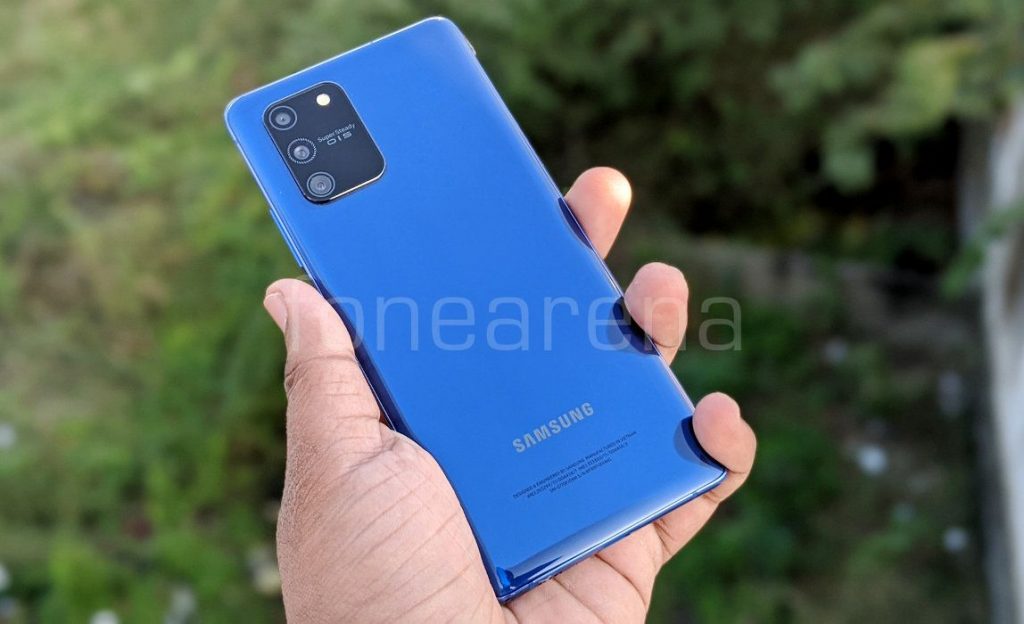 With the Snapdragon 855 SoC, the Galaxy S10 Lite handles tasks with ease. Be it a casual or intensive task, this phone performs great and I did not notice any major lag or whatsoever with my time with it. The apps open up quick and the 8GB RAM retains a lot of apps in memory and ensures smooth performance alongside. On top of that, Samsung has optimized OneUI to a great extent, and navigating through the interface is fluid.

Above all, the performance is consistent and I noticed the same with gaming as well. Casual games worked fine with ease as expected, and the playback in graphics-intensive titles like PUBG Mobile, Call of Duty was smooth with consistent FPS. 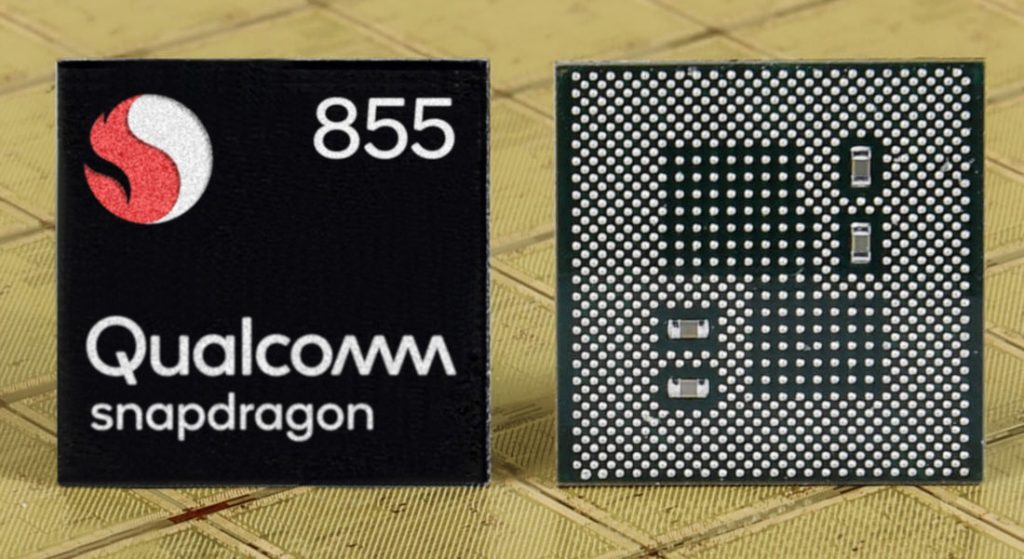 On the storage front, it is still running on UFS 2.1 and not on UFS 3.0 unlike its competitors in this price segment. As stated above, the performance is very good and consistent on this phone, but I’d have a UFS 3.0 storage on this device, considering the price segment. On the whole, I’m impressed with the performance of the Galaxy S10 Lite and it is great to see a similar performance as the S10 series on this one as well.

Check out the following synthetic benchmark scores below 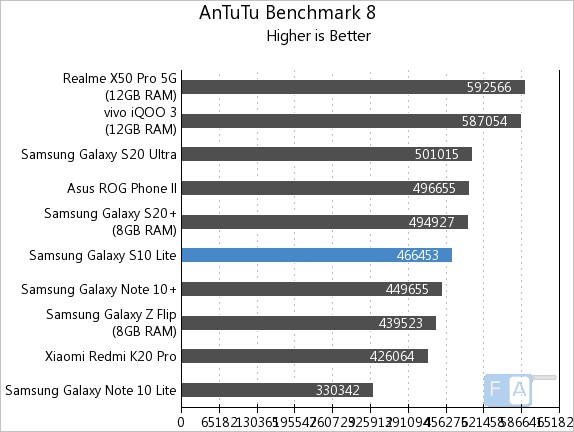 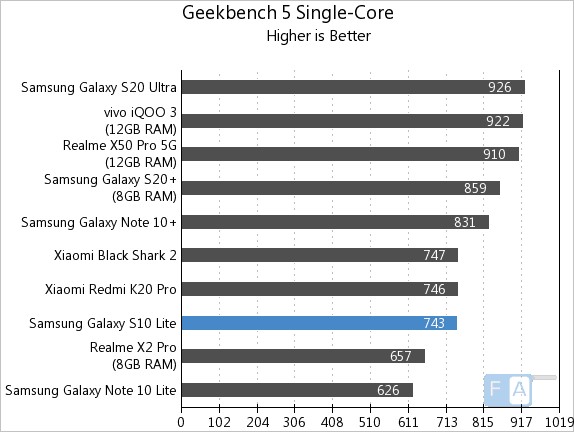 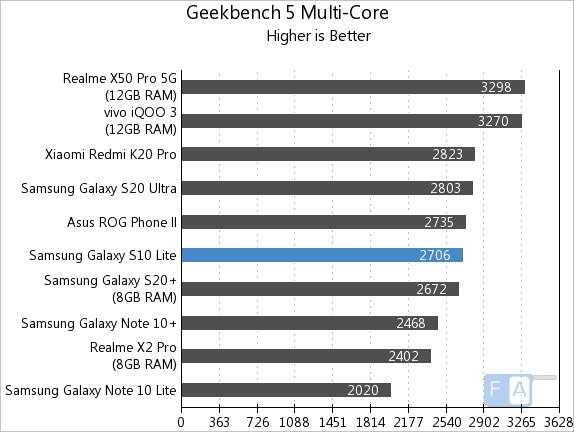 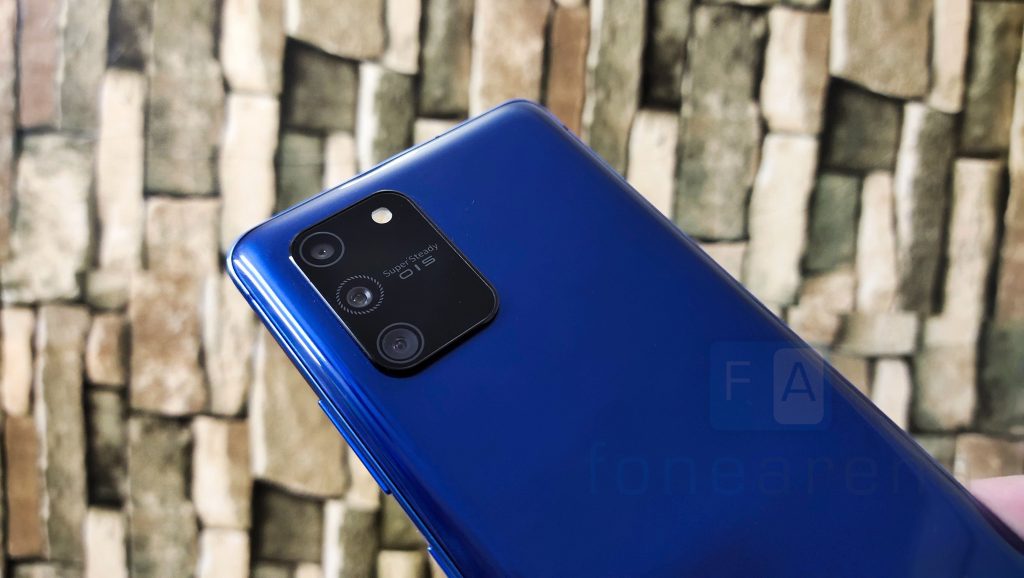 The S10 Lite sports triple rear cameras with a combination of 48MP primary sensor (Sony IMX 586) with f/2.0 aperture + 12MP ultra-wide angle sensor with f/2.2 aperture + 5MP 4cm macro camera with f/2.0 aperture. Coming to the pictures, the primary sensor on this phone captures great photos in daylight with ample detail and sharpness. The dynamic range is very good and the pictures, in general, are bright and vivid which is common on most Samsung Galaxy smartphones. Similar to other 48MP sensors, in regular mode, the pictures are pixel binned to 12MP with very good sharpness compared to the dedicated 48MP mode. There is support for Portrait Mode a.k.a Live Focus mode that gives you a live preview of the depth of field that will be achieved in the pictures taken in this mode. Although Live Focus does the job, edge detection isn’t the best and needs improvement. 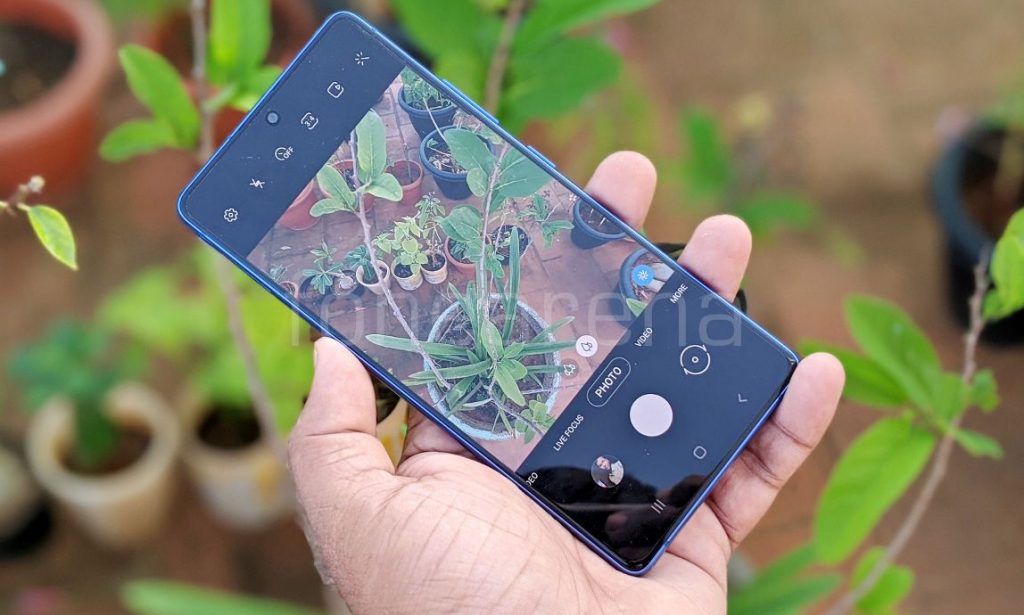 Moving on, the 12MP ultra-wide angle does a good job as well and while it’s not as good as the primary sensor, it gives a different perspective to the image whilst retaining the details. The 5MP camera does the job and is definitely a lot better than the 2MP macro sensor used in many smartphones. Lastly, the 32MP front-facing camera is housed in a centred hole-punch and takes great selfies as well. No complaints here.

Coming to video recording, the Galaxy S10 Lite can record up to 4K at 60fps without Super Steady Optical Image Stabilization (OIS) and up to 1080p at 30fps with Super Steady OIS. The front-facing camera can record up to 4K at 30fps as well. There is also support for Zoom-in Mic that comes handly whenever you zoom in or out. When it comes to the video quality, the daylight videos come out very good and the Super Steady OIS does an excellent job in stabilizing videos and doesn’t introduce any jitters. On the other hand, the low-light videos are strictly average and lack detail.

Overall, the optics are very good on the Galaxy S10 Lite and won’t disappoint you. Check out the samples below.

Samsung’s Android skin has got better over the period of the year and with the release of One UI, Samsung has cut down on the bloatware and the UI is not heavy now. It’s become one of my favourite UI after Oxygen OS. The OneUI features are the same across all Galaxy smartphones and the overall experience is smooth and fluid. 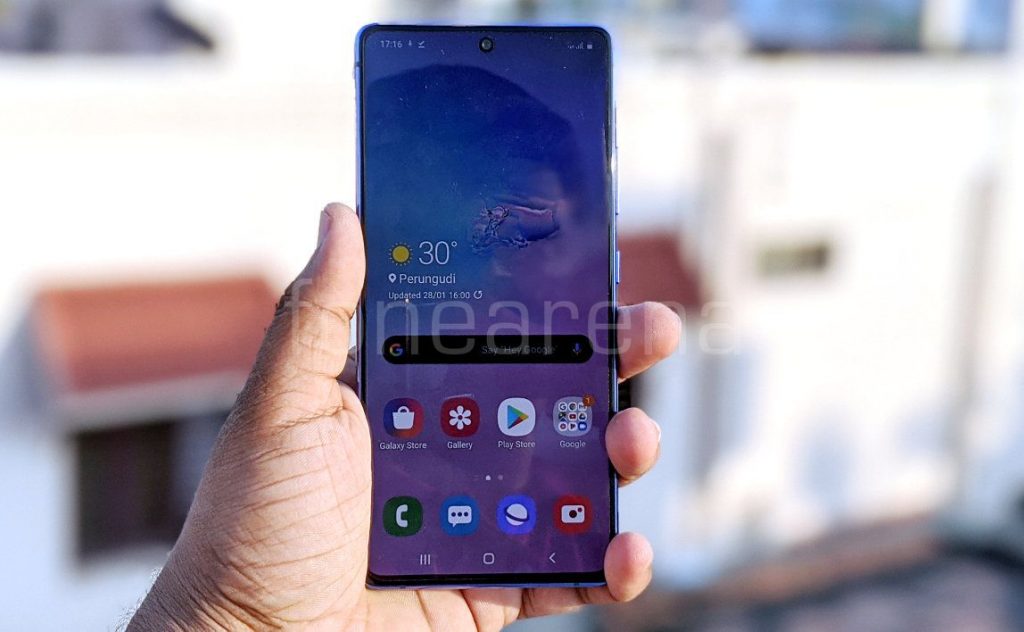 When it comes to the updates, the Indian unit is due for the OneUI 2.1 update, and although Samsung is providing timely security updates, it seems to be paused now owing to the lockdown. Coming back, it runs on Android 10 based One UI 2.0 with February 2020 security patch and comes with 128GB of internal storage, so there is ample space for your apps, games, etc. There is support for the full version of Samsung Pay and it works as expected. Overall, One UI 2.0 is clean, simple, and minimalistic with nifty features. 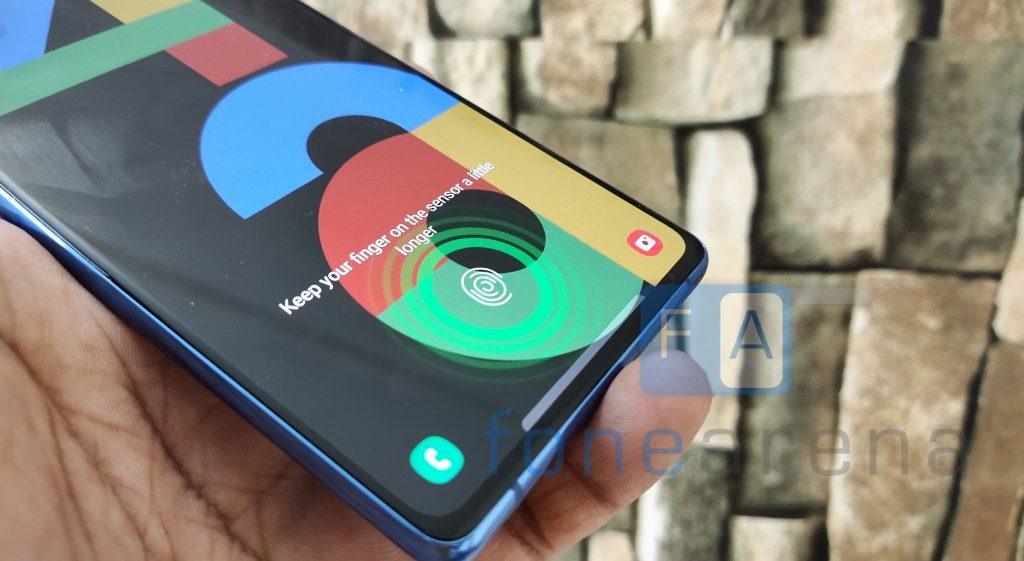 There are no stereo speakers, but it is quite loud and doesn’t distort at high volume levels. Coming to security, the Galaxy S10 Lite sports an in-display fingerprint scanner, and the response is quite quick as well. You cannot change the fingerprint unlock animation but it could be turned off. It is to be noted that there is no 3.5mm audio jack on this phone, unlike the Galaxy Note 10 Lite.

What I did not like about the Samsung Galaxy S10 Lite? 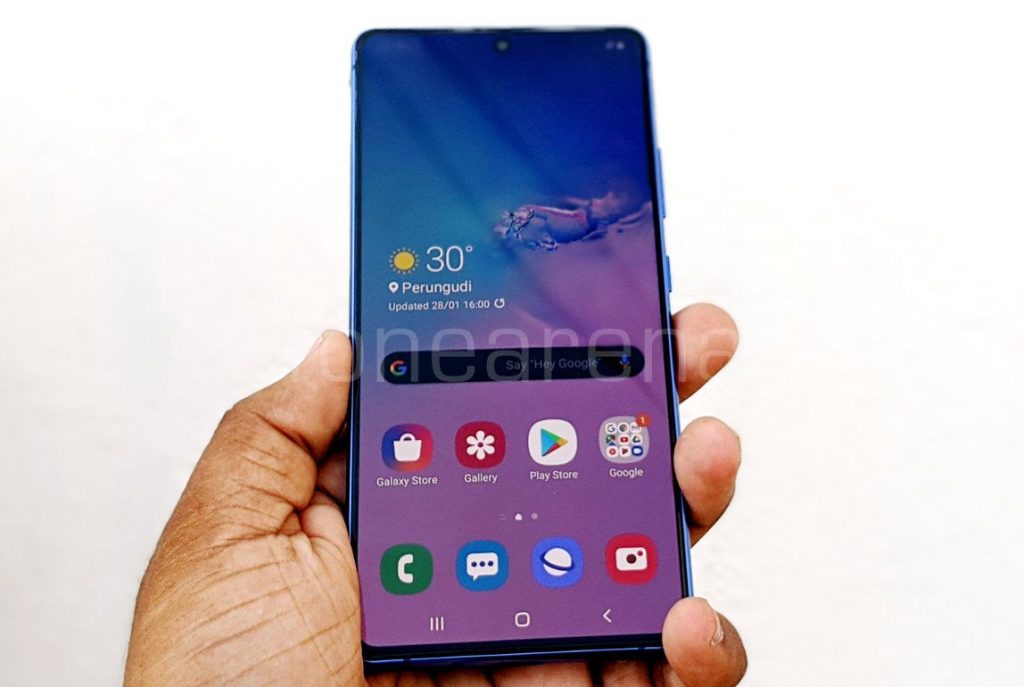 The Galaxy S10 Lite sports a 6.7-inch Full HD+ (2400×1080 pixels) Super AMOLED Plus Infinity-O Display with 394ppi and is HDR10 compatible. Samsung’s AMOLED panel is known for its bright, vivid colours and deep blacks, and it is the same with the Galaxy S10 Lite. The colours are vibrant and saturated, and you can tweak the colours from the display settings if you are not a fan of saturated colours. It gets pretty bright outdoors and the viewing angles are good as well. 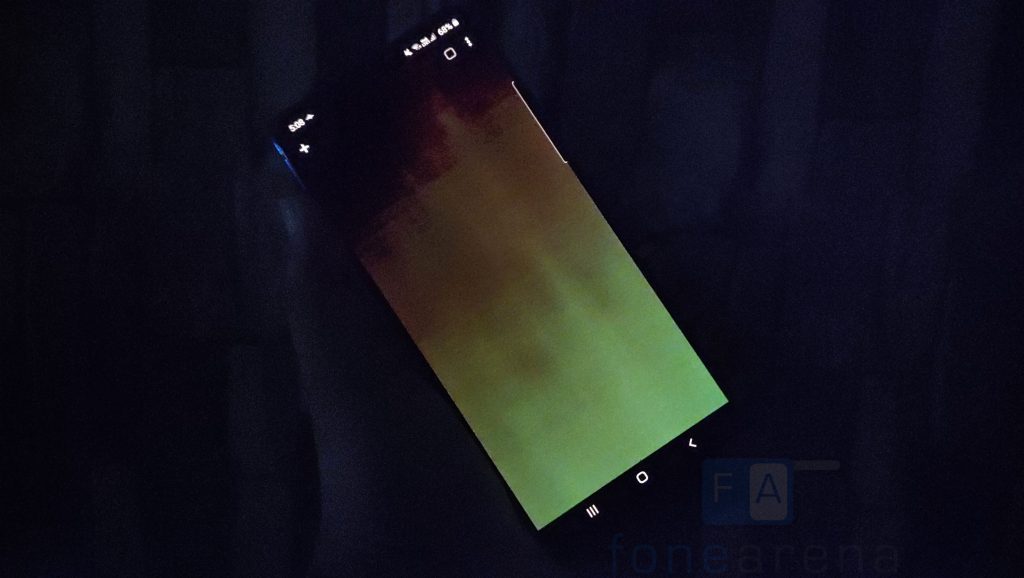 Having said that, my unit was plagued with the ‘Black Crush’ issue that occurs in AMOLED panels, and what it means is, darker areas of the display are grainy and pixelated. It occurs in low brightness and in this case, it was evident when the ‘Blue light filter’ was turned on. It might be annoying especially when you consume content during the night or in a low brightness environment.

This is not the first time as it has plagued the Galaxy S9 Plus earlier as well, and is seen on many phones with AMOLED panels. Samsung rolled an update to fix the Green tint on the Galaxy S20 Ultra and hopefully, the tuning is done better going forward. 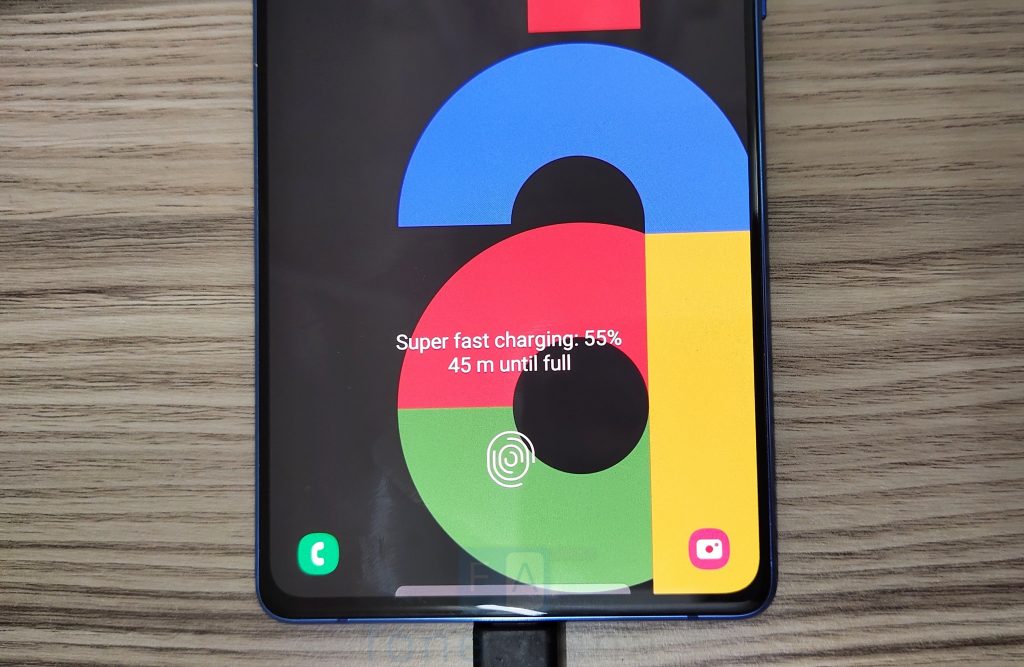 Samsung has packed a 4500mAh battery on the Galaxy S10 Lite with support for fast wired charging. After the display, another area I was disappointed, is the battery life. With heavy usage, the battery struggles to last a day, and more often than not, you’ll end up charging it at the end of the day. With casual usage, you can stretch up to a day, but overall, the battery life is sub-par. 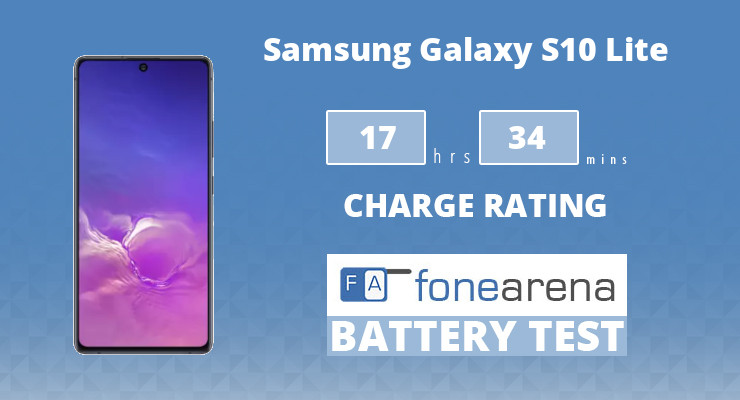 In our battery test, the smartphone achieved a One Charge Rating of 17 hours and 34 minutes, which is decent for a phone with a 4500mAh battery, but this is slightly less compared to Galaxy S10+ that packs a 4100mAh battery. Having said that, the battery can charge from 0 to 100% in about one and half hour with the supplied 25W charger and 0 to 50% takes about 25 minutes, which is a good thing.

The Galaxy S10 Lite is a Hybrid Dual SIM device, which means you can use dual nano-SIM cards or a nano + microSD. As expected, it supports Dual 4G VoLTE, Dual-Band Wi-Fi (2.4GHz and 5GHz), Bluetooth 5.0, and NFC. 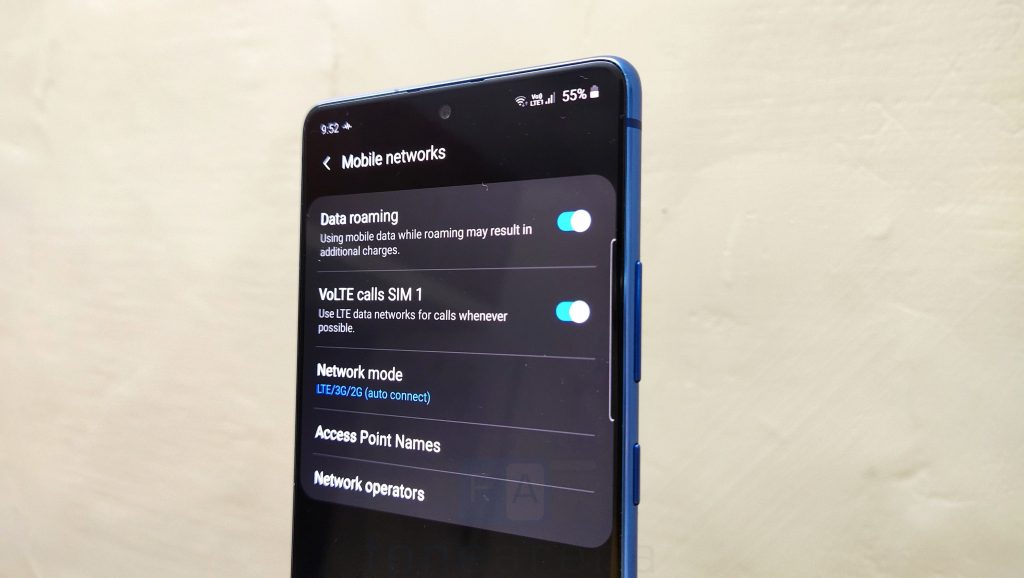 Coming to the call quality, it was good and clear, and I didn’t face any issues. But on the other side, the S10 Lite has stability issues with latching onto a cellular network, and a weird issue where calls won’t connect or ring when Wi-Fi and Mobile Data are turned on simultaneously. When the WiFi/ WiFi calling is turned on, the cellular network is gone haywire and the other party gets a not reachable message. This happens 8 out of 10 times and doesn’t seem to be a network provider issue as I have experienced the same issue with the different networks as well.

However, the issue didn’t occur when using either only mobile data or only Wi-Fi but not both simultaneously. Hopefully, Samsung will address these issues with a software update. 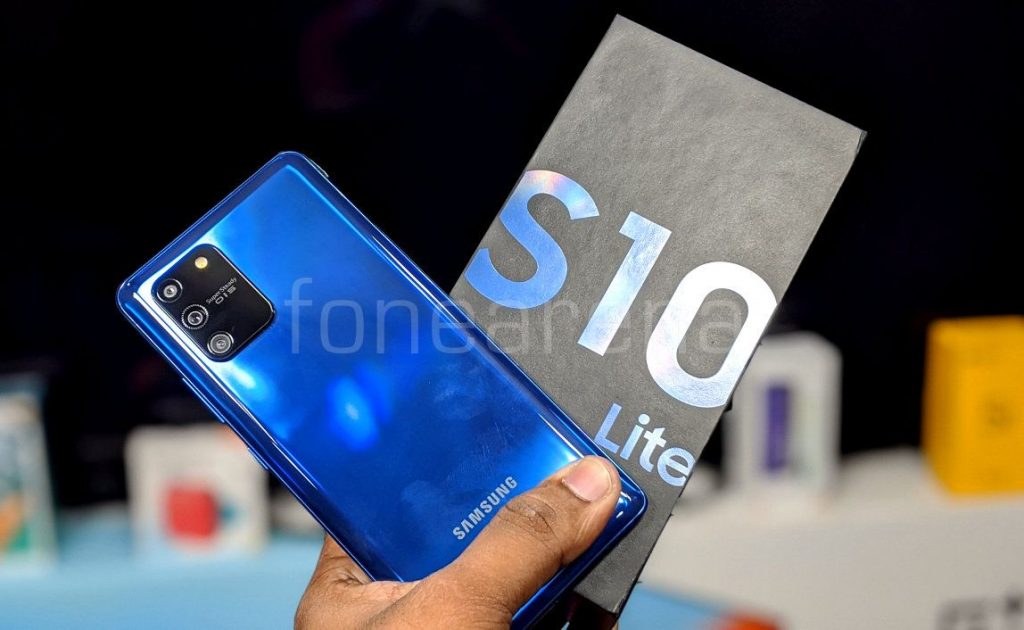