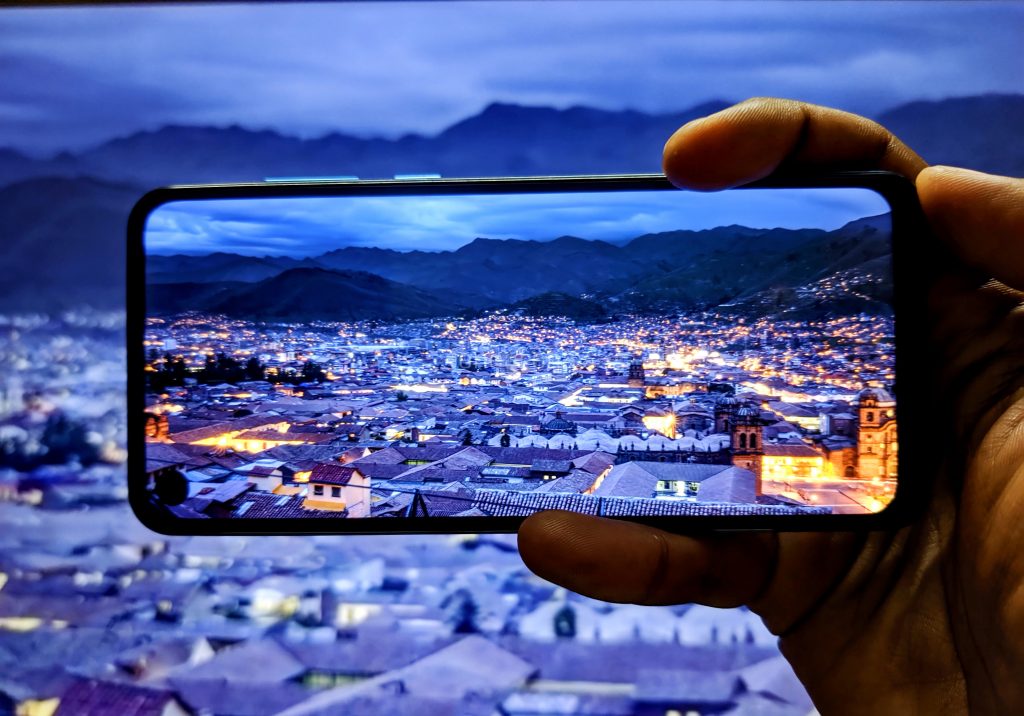 Be it watching videos, listening to music, or taking photos, multimedia is central to our everyday smartphone experience. With One Vision, Motorola aims to offer a great multimedia experience. The Lenovo-owned Motorola launched its first 21:9 aspect ratio smartphone in India a few months back with a range of features including OIS, wide aspect Cinemascope display, Dolby ATMOS, Screen mirroring, and a Quad pixel camera. We have used it for more than two months now and have come up with a review. How does it manage to do it? Do give it a read. 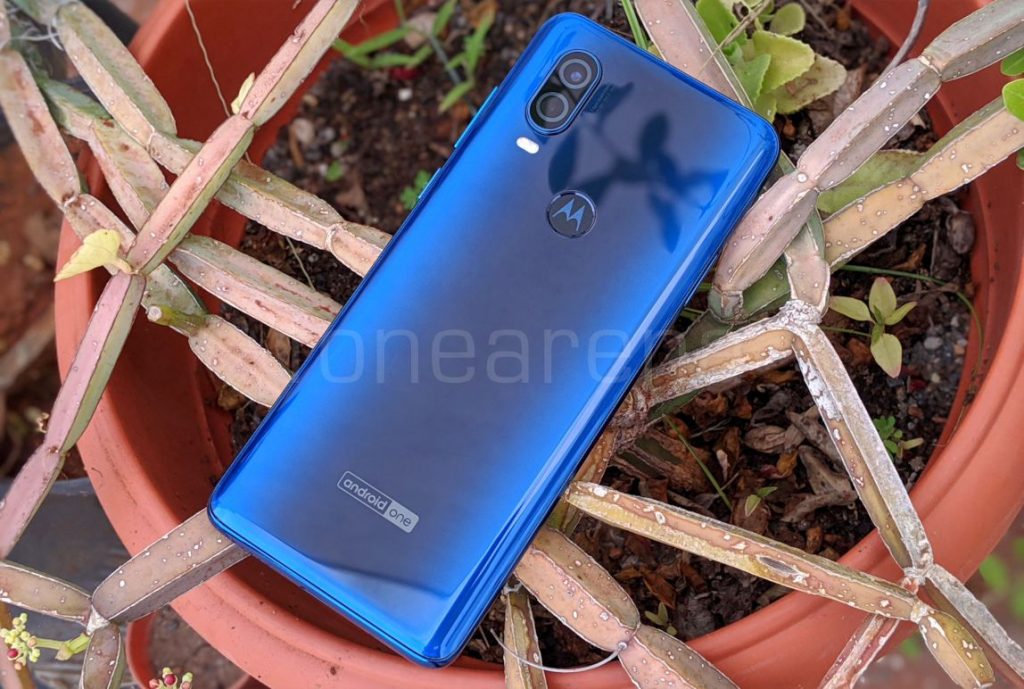 Compared to other smartphones with monotonous gradient design, Motorola One Vision is a better-looking phone than a lot of them. This phone doesn’t feel so premium, but the simple aesthetic makes the phone doesn’t look cheap either. The rear features a 4D Corning Gorilla Glass back with a gradient finish that shimmers in the light and is slightly curved on all four sides of the phone.

Even though it is tall, the device feels comfortable to hold, and interactive elements like the power button and volume rocker are easy to reach. Due to its tall form factor, it might peep out when kept in jeans. It measures 160.1×71.2×8.7mm and weighs around 181g. Overall, the Motorola One Vision looks refreshingly good from the boring Motorola One Predecessor. 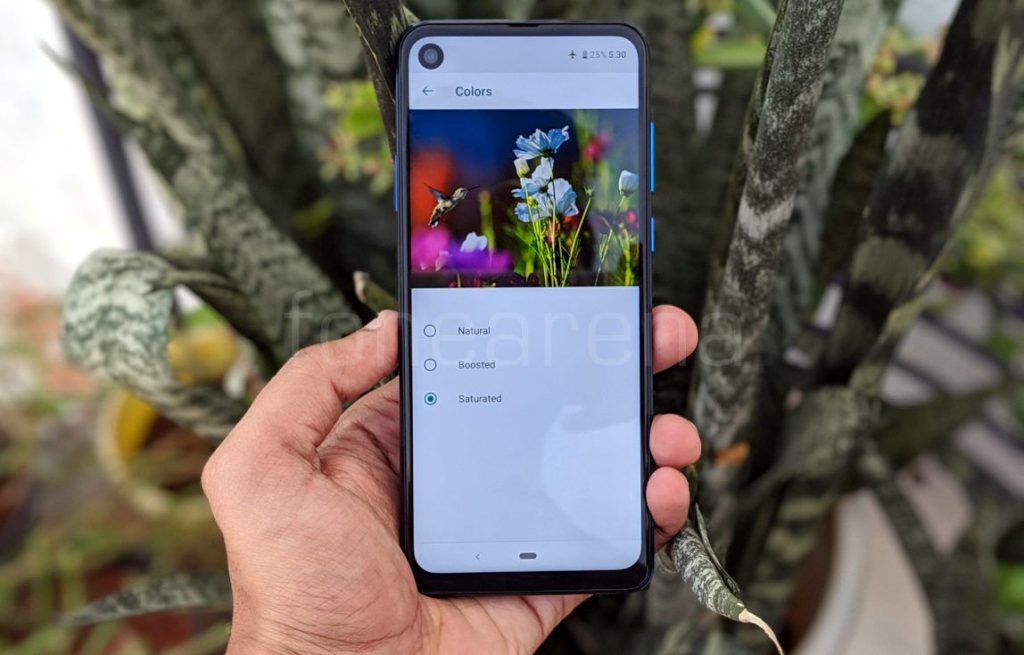 With One Vision, Motorola helps you get close to a movie experience on a smartphone. So, for watching films or any “CinemaVision” video, the Motorola One Vision offers a great experience. In addition to multimedia content, it is also suitable for vertical content, especially Twitter and other such social media apps. But, the elongated display has its disadvantage, which we will discuss on the other side of the article.

On a day-to-day usage, we found the display amazingly good in comparison with Motorola One’s 720p panel. The screen is bright enough with a good viewing angle, color contrast, and sharp text. The sunlight readability is decent if not excellent. The company offers few color settings to tweak the display as you like — Natural, Boosted, and Saturated. By default, you will get the ‘Saturated’ option. The display is protected by Corning Gorilla Glass protection, but the company doesn’t say which version it is.

The Motorola One Vision is shipped with Android 9.0 (Pie) out of the box. Since it comes under the Android One initiative, the One Vision will be updated until Android 11. So if you are looking for a future-proof phone software-wise, this is your option. It has a handful of Moto apps that offer gesture-based features. For example, you can shake your phone to activate the torch or flip it to capture what’s on-screen. Apart from Google’s native apps, it comes pre-installed with Moto, Moto help, and FM Radio. 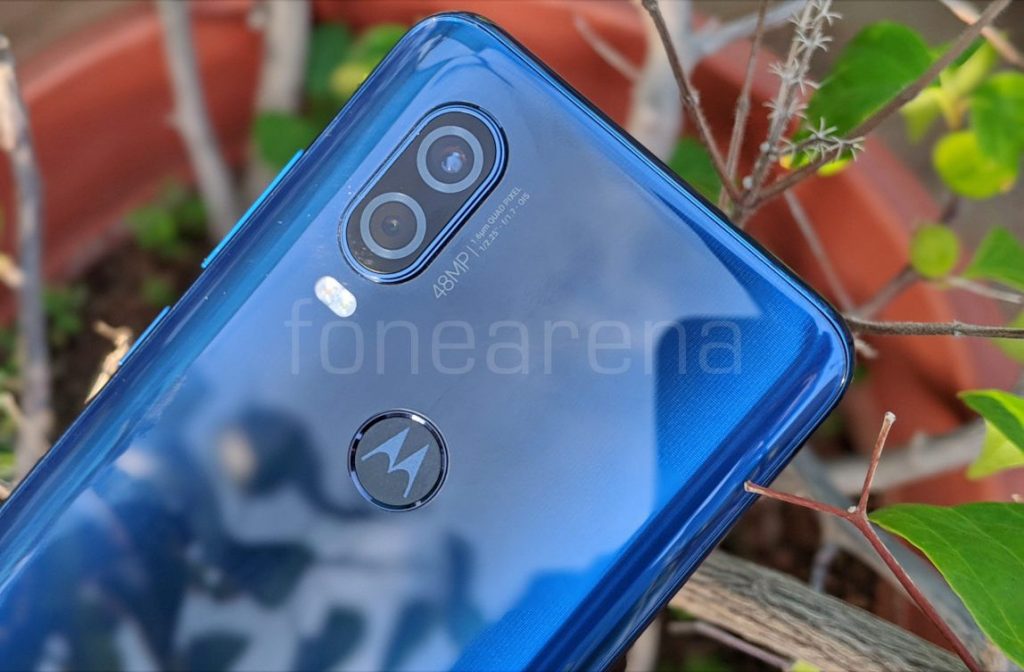 The Motorola One Vision comes equipped with a 48MP rear camera with Dual LED flash, f/1.7 aperture, OIS and a 5MP secondary rear camera with f/2.2 aperture for depth sensing.  The primary lens is quad Pixel camera which means 4 pixels are considered to be 1 pixel. With 4-in-1 pixels, the 12-megapixel photos that the Motorola One Vision creates are full of detail with the ability to maneuver them in your favorite editing app. Unfortunately, there is no option to take a 48MP output, unlike Xiaomi devices. 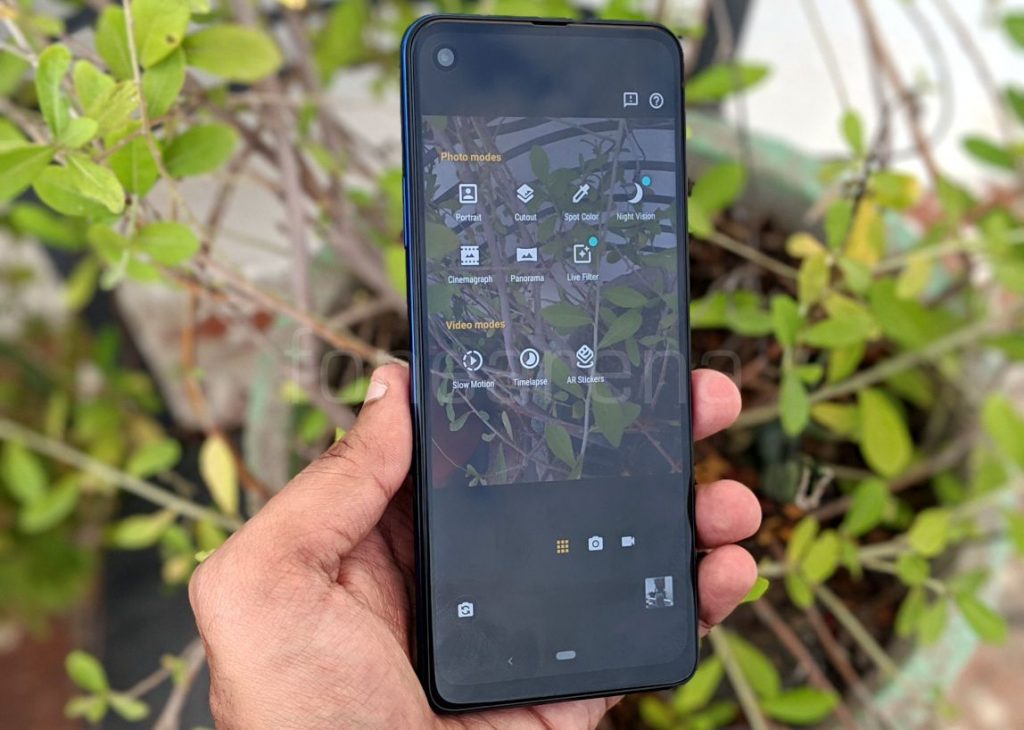 In the right lighting condition, the device offers some encouraging results. It offers an image with fine details and clarity that you don’t always get in a budget phone. It’s worth mentioning that the pictures are a bit oversaturated. The HDR output is comparatively better with enhanced colors and sharpness. The auto HDR is enabled by default, but you can choose to activate or deactivate as well. Macro in One Vision is impressive but struggles at time to lock focus. The output turned out to be good with great detail.

It also has dedicated Night Mode which lets you capture light where none exists. It also is an algorithm that ensures that the highlights are not blown off, while the shutter is open for a much longer time than usual. With OIS, Motorola One Vision manages to fully take advantage of this, with a longer shutter speed that helps capture a less-shaky picture. It takes multiple exposure shots and stitching them into a high-quality image. Apparently, the device does an excellent job of bringing out color and preserving detail in a frame.

On the front, we have a 25MP front-facing camera with an f/2.0 aperture. The front camera does a good job as the selfies are detailed and crisp. Portrait selfies exhibit a good bokeh effect and a healthy amount of detail. Moreover, the 6MP Quad-pixel output is way better than the 25MP output.

When it comes to video, it can record 1080p videos at 30fps or 60fps and 4K at 30fps. Additionally, it can record slo-mo videos at 240fps or 120fps. While recording videos, we came across focus-hunting issues at times. Video quality is decent; OIS helps deliver smooth videos without shake. It also comes with other photo modes, including Cutout, Spot Color, Cinemagraph, and more. 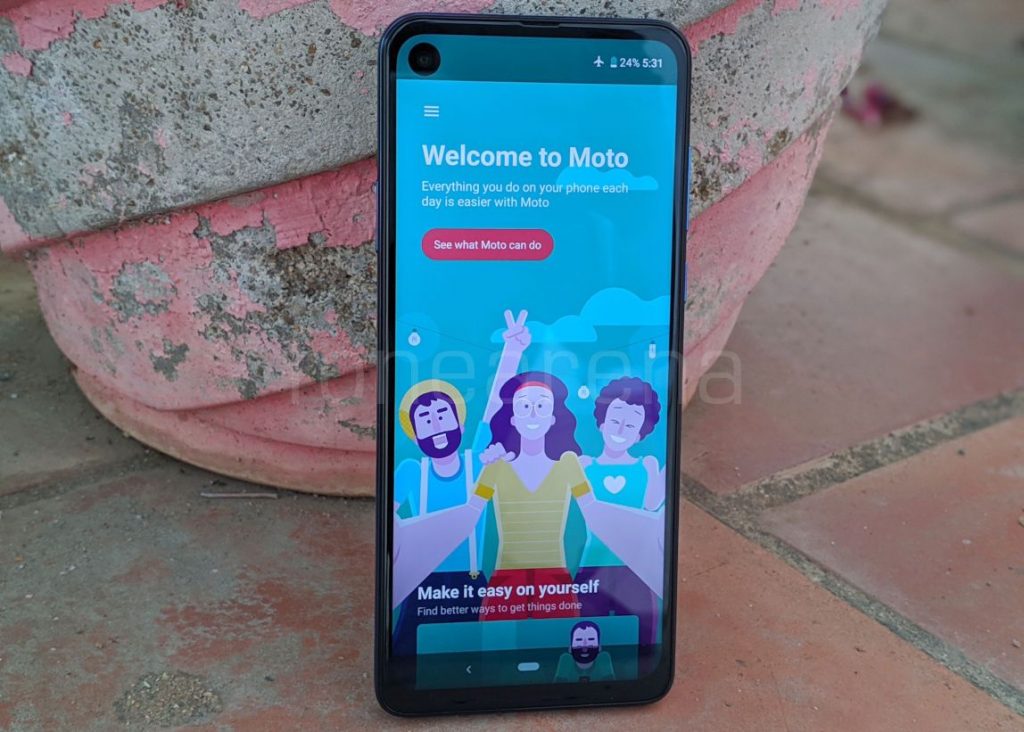 This time its no Qualcomm or MediaTek! Its Samsung’s Exynos. Exynos 9609 processor powers the Motorola One Vision clocked at 2.2 GHz under the hood with Mali-G72 MP3 GPU. This device produces enough clout to handle the day-to-day task and beyond without any lag or hang. This chipset is built using a 10nm fabrication process. We also played PUBG and Shadow Fight 2, and it can handle without any excessive lag or unbearably hot. We felt a bit of heat, though. It has 4GB LPDDR4x RAM, 128GB UFS storage and expandable memory up to 512GB via Hybrid SIM slot. The RAM management is acceptable as well, considering the price point.

Check out the synthetic benchmark scores below, but just don’t just go by the numbers, since scores don’t always translate to real-life performance. 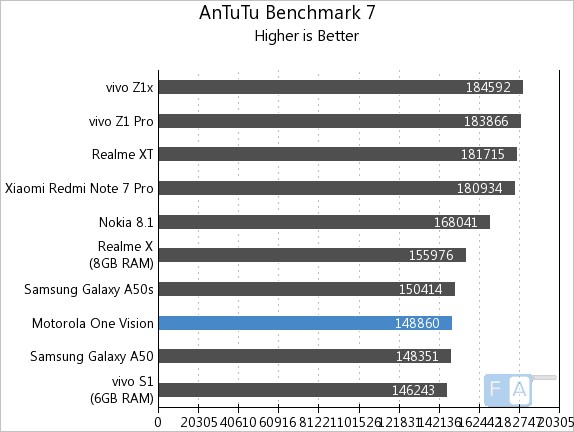 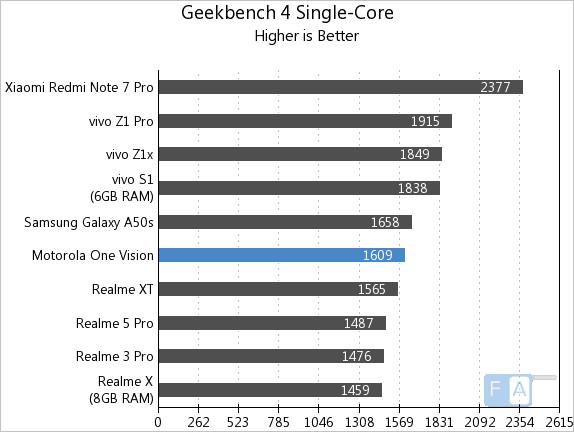 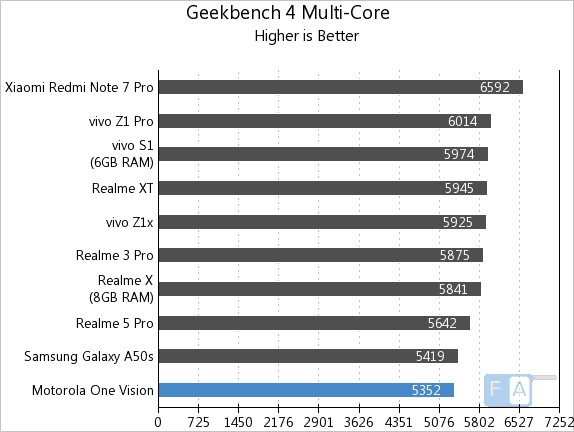 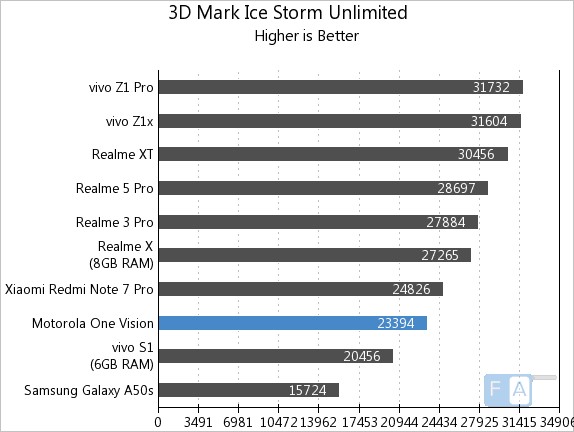 Not the best battery life 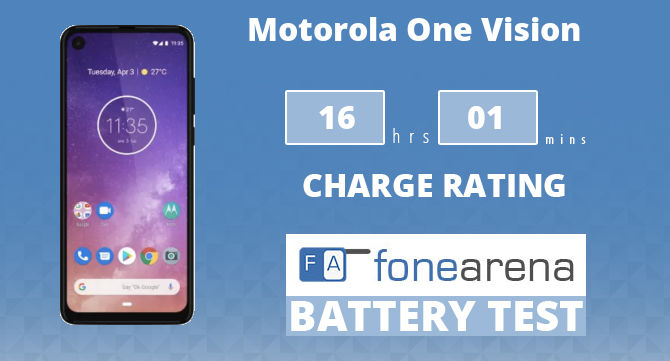 The Motorola One Vision is powered by a 3500mAh with 15W TurboPower fast charging. The battery life is all average and nothing more. On casual usage, we got around a day, which is certainly not great. If you’re a heavy user or planning a trip out for the day, you should bring along a decent power bank.

In our One Charge rating, the Motorola One Vision achieved a rating of around 16 hours and 01 minute, which is decent, but not the best. When it comes to charging, it took about 1 hour to charge from to 50% and took 2 hours and 20 minutes to charge to 100% with the bundled 15W TurboPower charger. 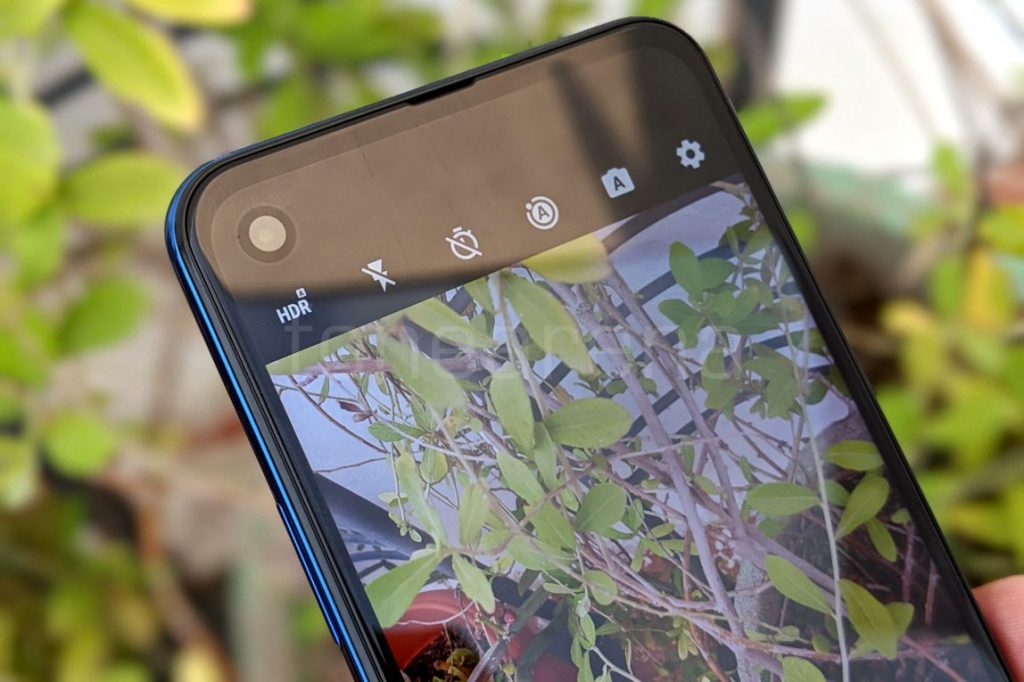 First of all, I am not a fan of punch-hole in general, and this looks way big and ugly on the front. For the uninitiated, the punch-hole sports a 25MP front camera on the top left of the screen.

According to Motorola, the company says the big punch hole is for stability, to avoid the screen cracking under pressure. At times, we found it more distracting, especially during gameplay. At 7mm in diameter, it also makes the notification bar chunkier as well. 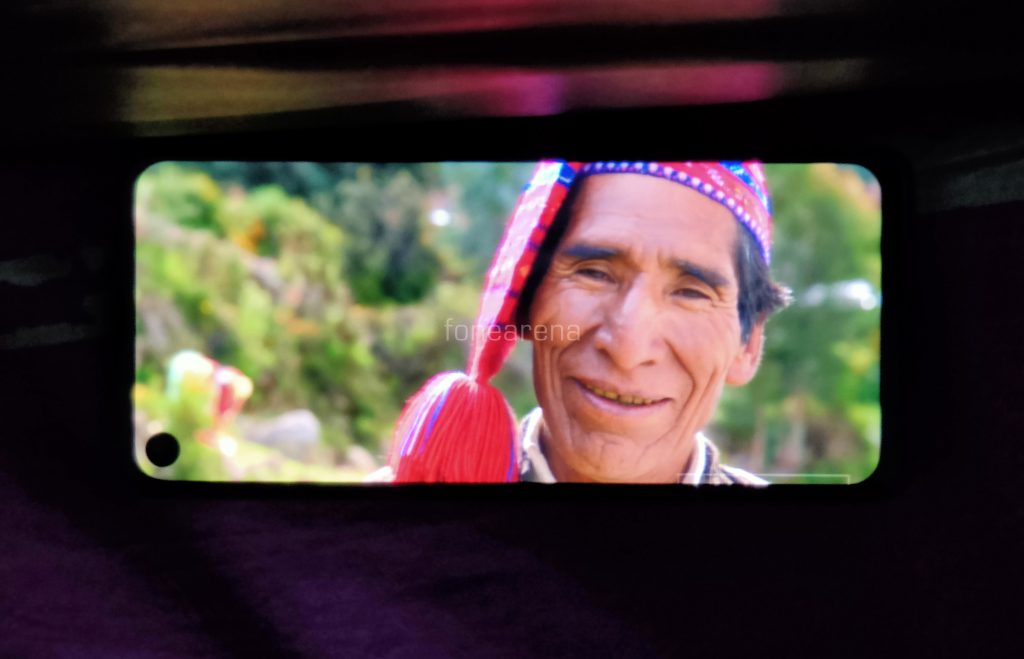 While this aspect ratio has its advantage, there isn’t enough content that’s viewable in this format at the moment. Having said that some regular content doesn’t fit well to it. But give it a little while, we are sure that streaming companies like Amazon and Netflix will add to its content offering.

The dedicated Dolby audio app lets you change between different presets for music, film, and a smart audio option that adjusts the sound based on what you’re listening to or watching. It is loud and offers good details at a higher volume as well. The call quality through headsets and loudspeakers was good too.

The Motorola One Vision comes in Sapphire Gradient or Bronze Gradient colors, is priced at Rs. 19,999 and available on Flipkart.