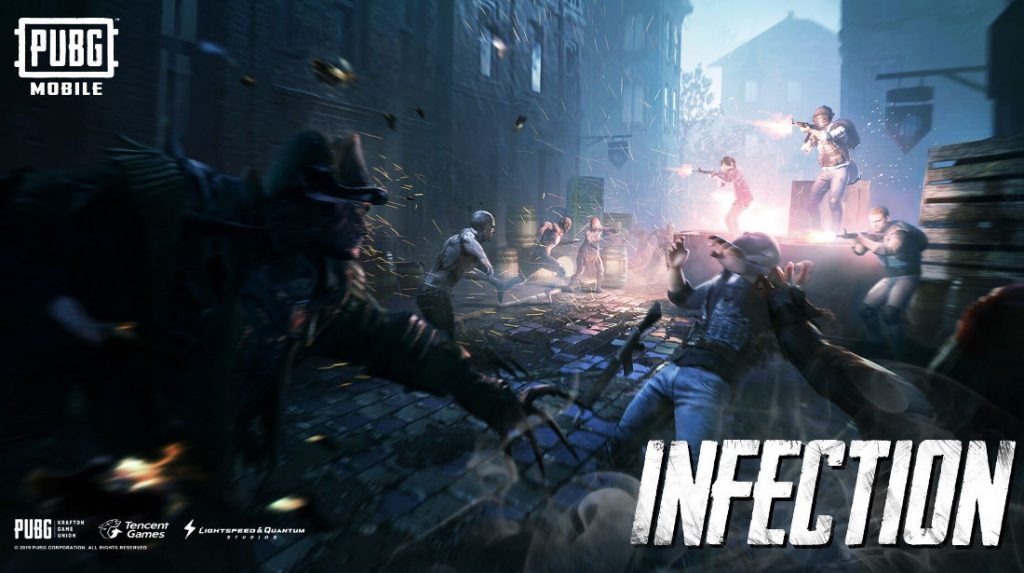 Tencent games has released new PUBG Mobile update which brings the version number to 0.14.0. This brings new Infection mode where players are divided into Zombies and Defenders at the beginning of the match, New character system to unlock more appearances and skills, Pirate main menu theme, and the million-dollar Global Treasure Hunt, and more.

The PUBG Mobile 0.14.0 update is about 750MB and has started rolling out to iOS  and Android from today. When you update the game before August 23 , you get Parachute Trail and 2,000 BP.

a) Asymmetric PVP mode where players are divided into Zombies and Defenders at the beginning of the match.

b) Defenders have firearms, but Zombies can only use melee attacks and abilities with cooldowns. Zombies can revive after being killed, while Defenders will turn into Zombies.

c) If all Defenders are infected, Zombies win; and Defenders win if at least 1 survived within the given time.

e) Infection can be played in room mode.

a) Victor, the first new character, is available for free. Collect him from the Character under Workshop.

b) Victor’s skill reduces SMG reload time. His skills work in EvoGround and do not affect the balance in Classic mode.

c) Victor has exclusive outfits, with Legendary Conquest being the best one. Collect materials and level up to get unique emotes and voices.

d) Level up Victor by playing in matches. There are rewards for every level and a special reward: MVP Results Emote at level 10 (max). Get premium Character Crates with rare rewards by earning EXP after max level.

a) Hunt for treasures during matches to find hidden treasures. Collect gold, silver and bronze compasses to redeem rewards.

Divided into 4 stages, each with its own map. There are 7 levels for each stage, and 2 missions for each level.

Unlock the stage crate by completing 7 or more missions in a stage.

Complete all 56 missions to unlock the final reward.

Complete any mission of a stage to join the lucky draw and win the PMCO travel fund. There are 10 winners for each stage.

iOS players can now switch the app to background while downloading updates.

5. Android Resources Pack: Reduced the size of Android installation package and added a new Resources Pack, which contains some rarely used resources that are displayed with a placeholder icon unless the Pack is downloaded.

a) Reduced the number of missions and upgraded the rewards.

b) Daily Missions, other than the Login Mission, are released randomly. Players can switch to other random missions in the pool up to 3 times a day.

7. Level V and rewards added for some achievements.

A. iOS platform thread scheduling adjusted, reduced the power consumption and heating of some iOS devices

B. Smoother experience for getting on/off or driving vehicles

D. Smoother experience for when other players and Air Drops come into view

G. Items can now be picked up and equipped faster on some low-end devices

3. Outfits: when new outfits conflict with the currently equipped outfit, the old outfit will be unequipped display the new one.

6. Portable Closet: the UI will be collapsed when players stop tapping the icon. Added “undo changes” icon to restore the previous outfits with a single tap.

8. Improved the Rankings background to match the overall visual.

9. Improved Team and Friend interfaces. Players can now view friends’ avatars on the main menu. Friend button will pop up only when players expand the Team interface.

10. Added the Middle East server to Crew Challenge for players in that region.

13. Fixed a bug where character models got stuck in buildings.

14. Fixed a bug where Zombie got stuck in walls in Survival mode.

15. Fixed a bug where linked social account could not change avatars.

16. Fixed a bug where Backpack models in the main menu were not displayed correctly.

17. Fixed a bug where nicknames were misplaced on the Clan page.