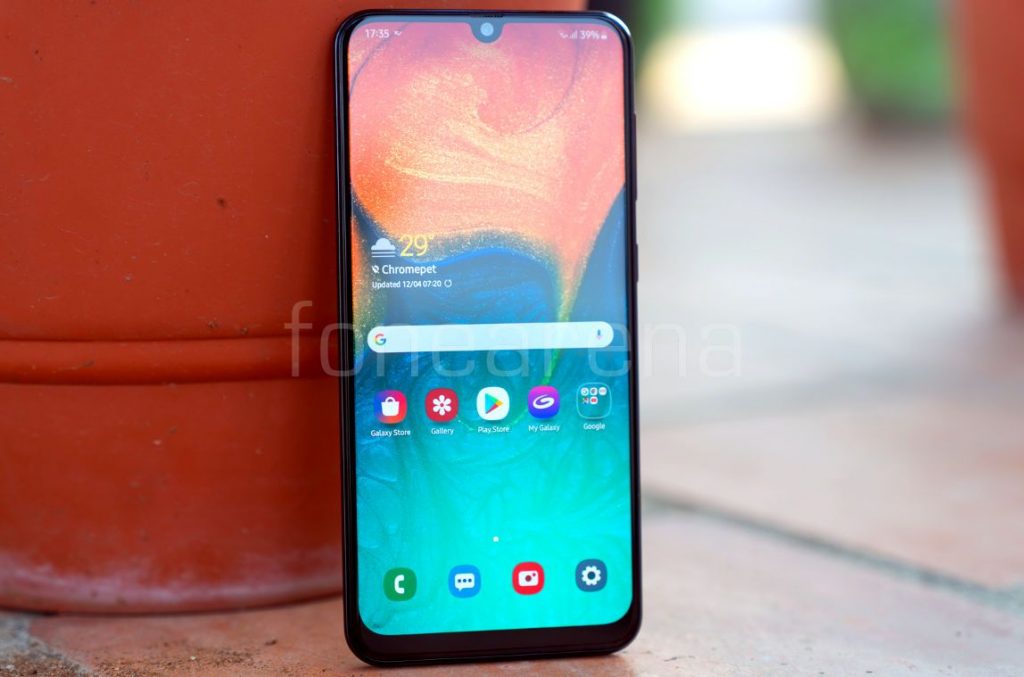 But not all markets are the same. When it comes to the entry level segment or what we call the “mid range” of the Indian market, we frequently hear the names of Samsung’s Chinese competitors than Samsung themselves but this year, it has changed with the newly launched M series and the A series. 2019 is Samsung’s comeback.

With a price tag of Rs. 15490 (After a recent price cut), the Samsung’s Galaxy A30 gets a lot of the basics right and does certain things really well. But can the A30 compete in this cut-throat market and where does it fall behind the competition. Reading the specs sheet is one thing, a review is another. This is our review of the Samsung Galaxy A30. 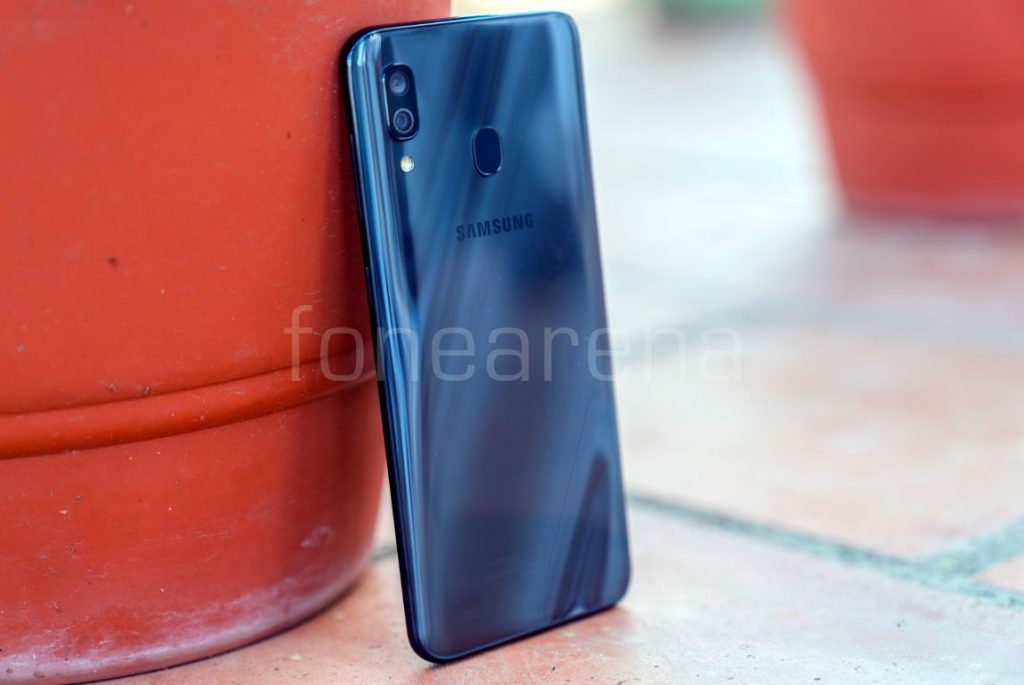 The unboxing of the Galaxy A30 will give you the device, the charging cable, the charger, SIM tray ejector, the TPU case, stereo headphones and the user manual, of course. While most mid range phones don’t get a headset, the ones that come with the A30 are not good enough to recommend using for listening to music.

For any phone, mid range or entry level, the first thing we notice about a phone is its design and how it’s built. There is no doubt that the Galaxy A30 has a premium design and look. Even though Samsung is using a cheaper-than-glass plastic material, they’ve ensured that by the use of a “glasstic” finish, the device looks and feels more premium than its predecessors or even Samsung’s own M series. 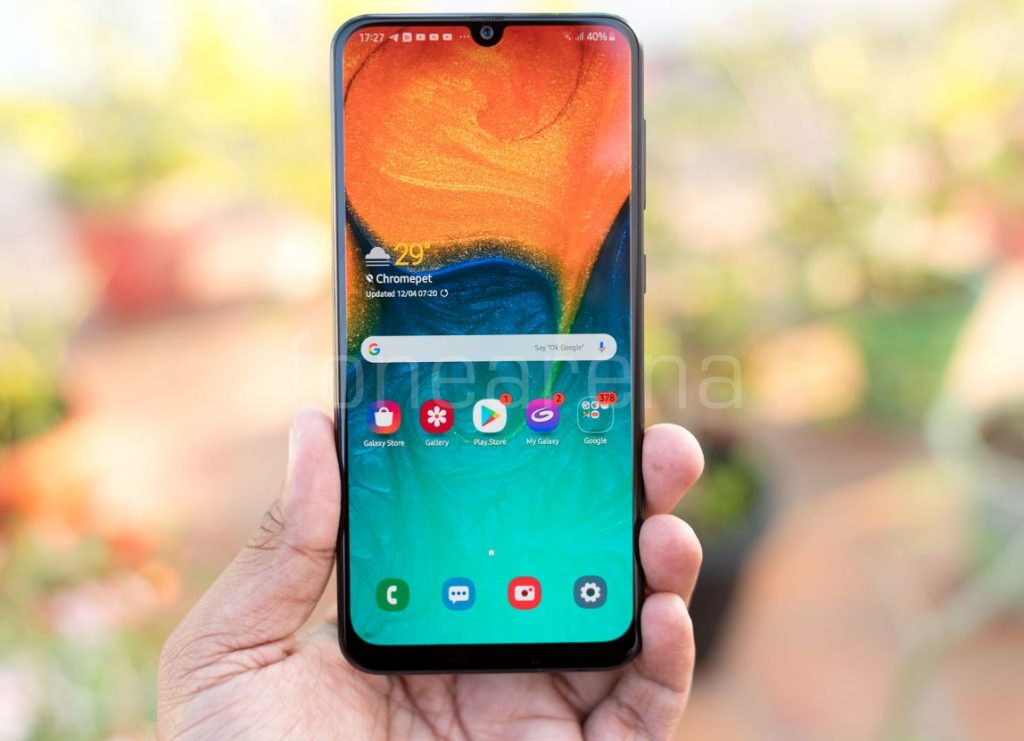 At the front we have a 6.4-inch Super AMOLED display, with an infinity U notch. While Galaxy A30 has a great display is not surprising, the fact that Samsung has a 17k phone with great screen to body ratio and a Super AMOLED screen is a welcome shock.

Right side of the phone houses the volume rocker and the power key. The 3.5mm Jack and the type C port along with the speaker grille are at the bottom while at the back you have the dual camera and the finger print sensor. The SIM tray is on the left side and this is all you get when it comes to the phone’s design on the outside. 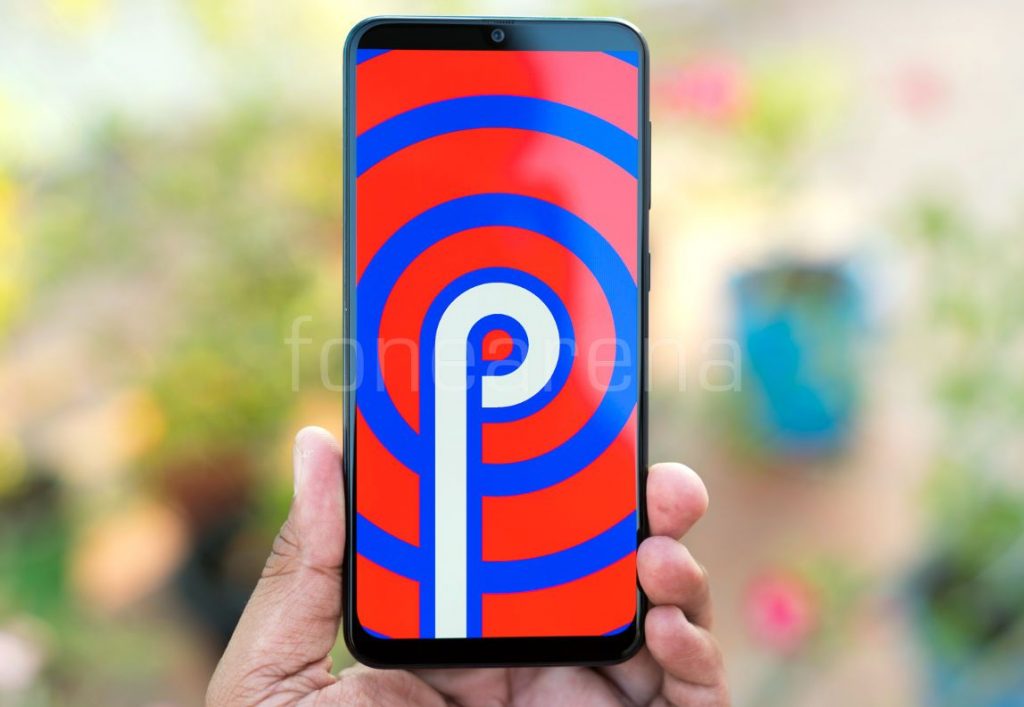 Take any device, Android or iOS, the user experience is best when there is a great bond between hardware and software. That way, on the inside, Samsung’s One UI on top of Android Pie is the latest software experience that is bonded with the hardware. A radically redesigned One UI is a massive upgrade from Touchwiz and the Samsung Experience UI. 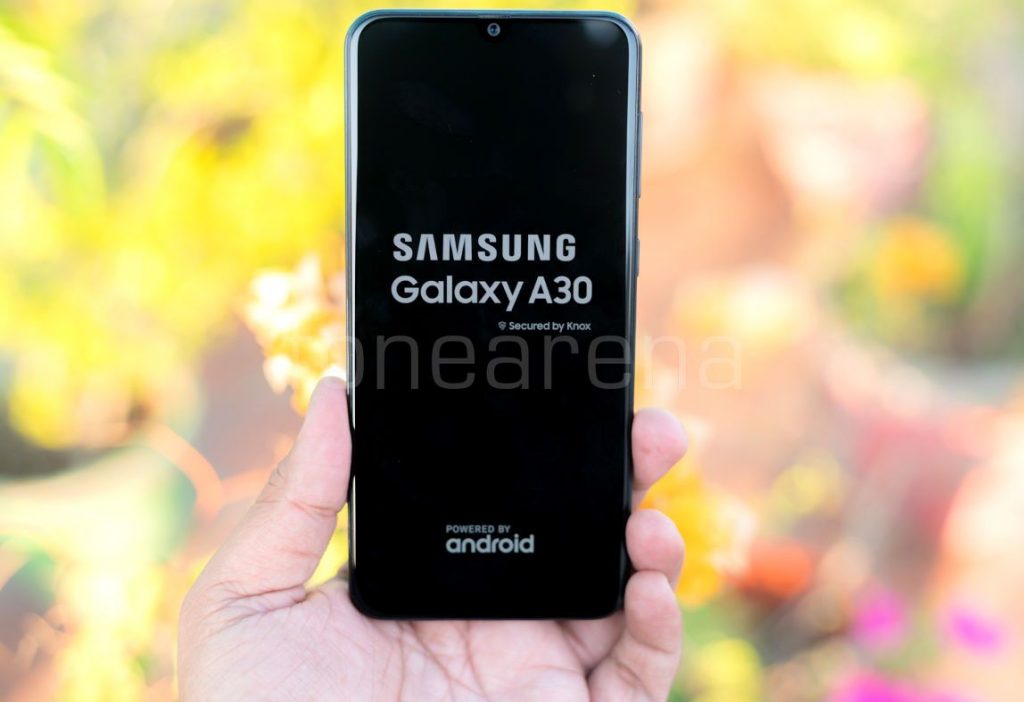 One UI is so good that it takes advantage of 75% of Samsung’s AMOLED devices. The default dark mode ensures that you get more battery life. A good synergy between software and hardware. One UI also is designed for big screen phones with everything at the reach of your fingers. The whole UI is designed in such a way, which is great for big screen phones. Another good synergy.

The theming engine is great, the default icons are designed to attract youngsters and new users. So when it comes to attracting the youth, how good is gaming on this device? We tested a lot of games like PUBG, Asphalt 9, Subway surfers, Brawl stars, and we found that the experience wasn’t entirely laggy but it wasn’t fully smooth as well. It’s very average gaming performance, so we’d recommend anything with a higher powered chip like Snapdragon 835 or Kirin 970 for gaming.

Battery is a big 4,000 mAh capacity unit which is rather great for gaming as PubG draws only about 10 percentage of battery after gaming for about 30 minutes. One of the important observations we found is that the device’s average temperature did get hot enough for an unpleasant experience. That’s why we feel this phone is not made for gaming but rather multimedia and social networking. 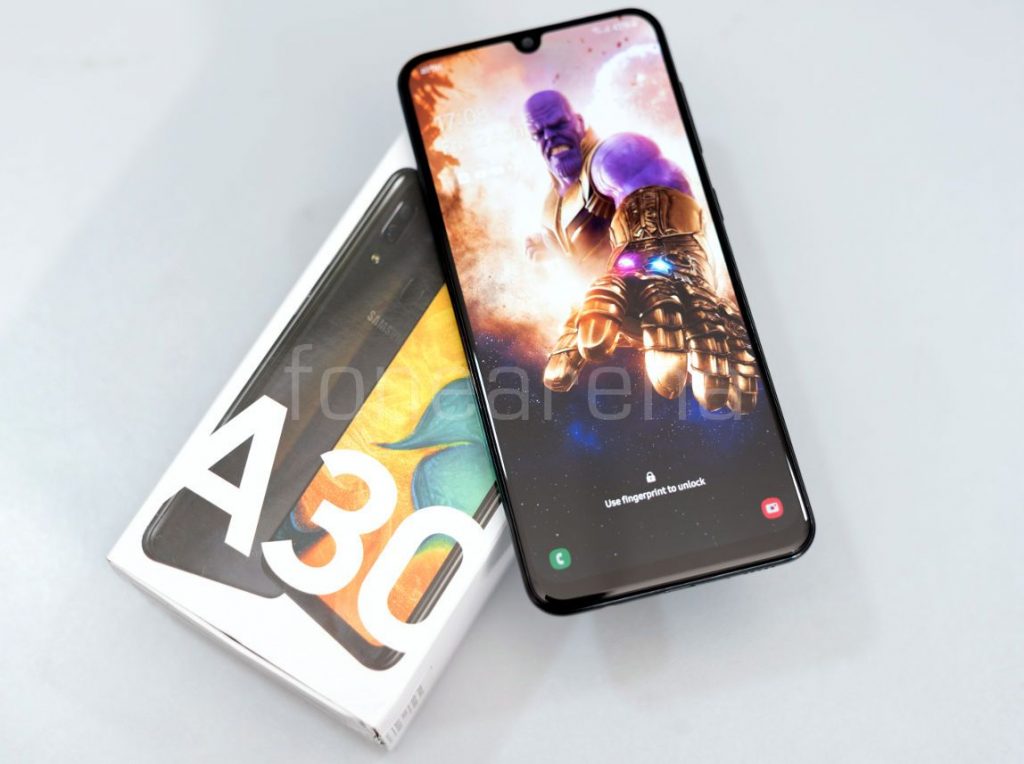 The big 6.4 inch display is great for watching video and general social networking. While the loudspeakers are not that great, the audio is very well established with a 3.5mm jack driven by software like Dolby atmos and TubeAMP pro in sound effects as well. If you use a good headphone, the audio from the Galaxy A30 is great. So if you’re looking for a good multimedia phone this one is highly recommended.

As we had said earlier for a good experience a good bond between software and hardware is necessary and one of the most important parts of hardware powering the experience is the chip. Powered by the Exynos 7904, the Galaxy A30 does not satisfy the criteria for an acceptable user experience. Even though it has the Mali G71 MP2 GPU, which struggles to do tough games like PUBG.

Check out the synthetic benchmark scores below 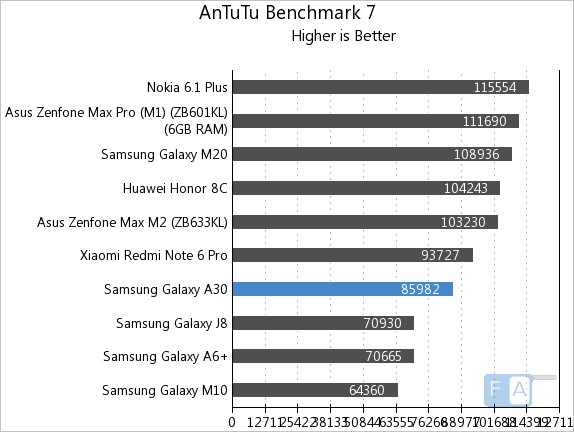 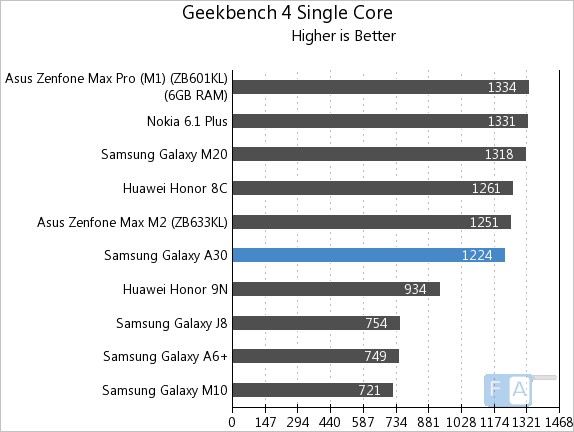 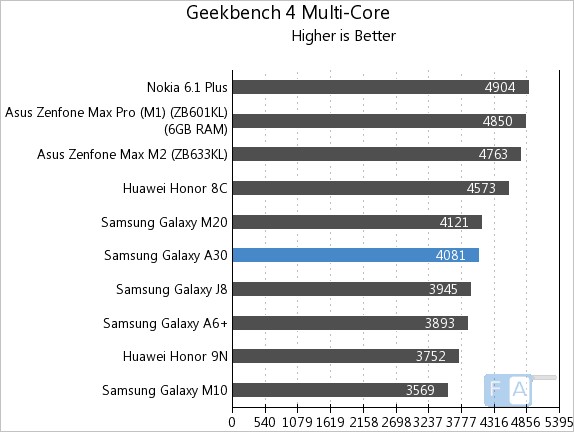 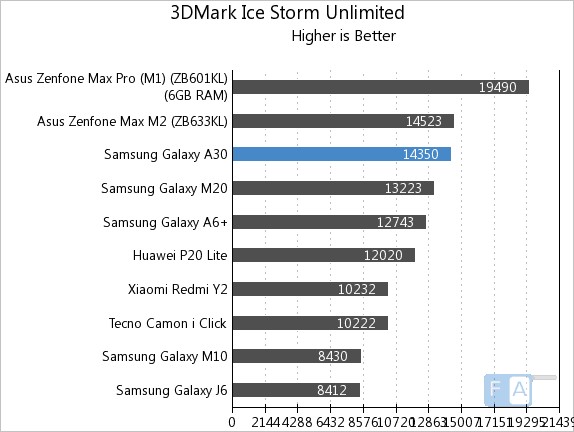 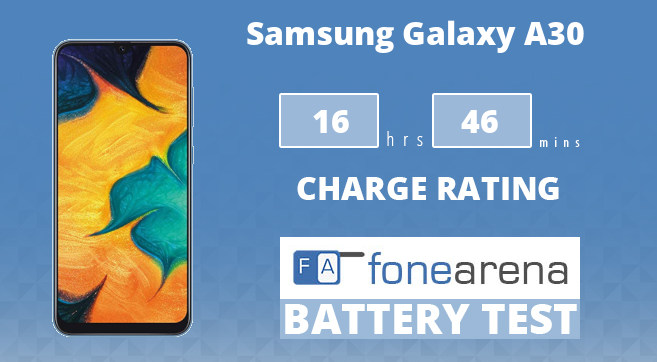 But all said, a big battery which is like the heart pump of the phone helps. Having a massive 8 hour screen on time sometimes and a regular 6 hour screen on time is unmistakably good for any smartphone experience. One problem we found with this device is a call UI bug. This is not with all One UI devices, rather only this one which we hope they fix with an update. When someone calls, the phone takes a long time to recognize the call and light up the display. This is very frustrating because for us, calls are still very important. Hopefully it gets fixed. 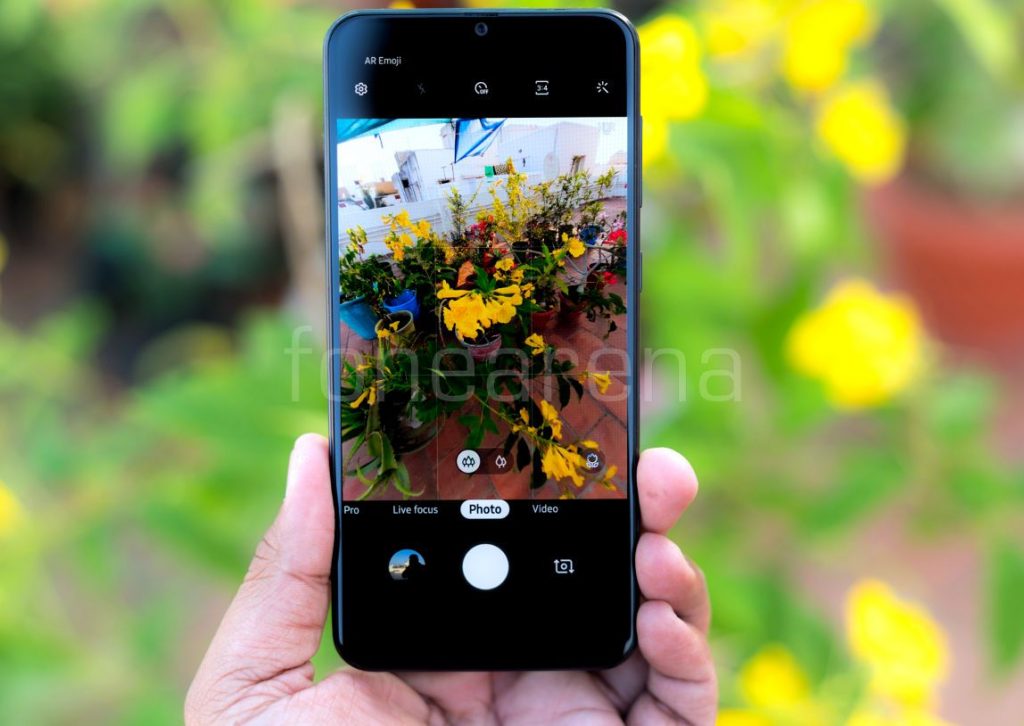 The base storage and RAM variation is 4GB and 64GB. We mostly use the storage for the camera. On the front we have a 16 MP f2.0 selfie camera. While it is not that great in terms of dynamic range, it produces acceptable results. The rear camera is 16 + 5 MP setup with a normal lens and a wide angle lens instead of a depth sensor that everyone else seem to use. 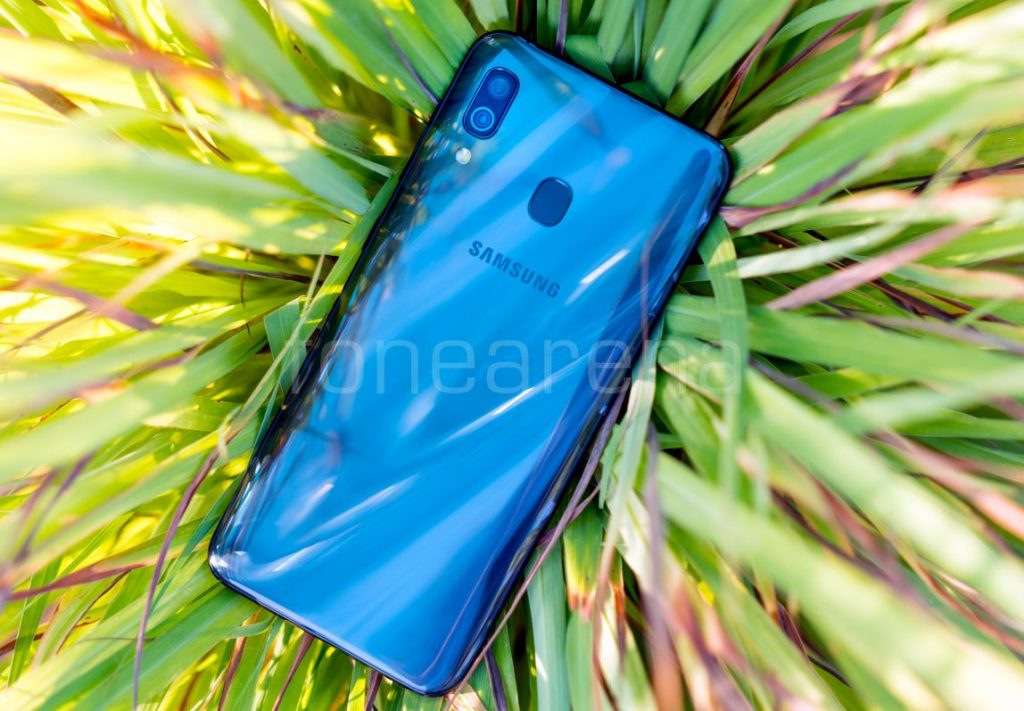 The fish eye like wide angle lens is not that great but from the samples you can fairly identify what kind of a camera Samsung has in the Galaxy A30. One downfall is dynamic range when it comes to competition, that could have been better and the wide angle image could be better as well, but the phone is generally decent otherwise including the full HD video recording.

All said, the Samsung Galaxy A30 is a good phone but not without its downfalls. If flagship phones are not perfect, we cannot expect the A30 to not have its problems so let’s see the Pros and Cons of this device.

At this price, the competition is in the form of Realme 3 Pro, Redmi Note 7 Pro, Zenfone Max Pro M2 and Samsung’s own M30. Nokia 6.1 Plus is a formidable competitor as well. To win beyond these options is a tough job but Samsung has a really good multimedia phone in the Galaxy A30. For those who don’t game and are happy with great battery life and a solid multimedia experience can buy this phone.

If you have any specific questions on the Samsung Galaxy A30, do post them in the comments section below.

Listen to the Review by Siva in Tamil

Edited and Translated by Bharadwaj