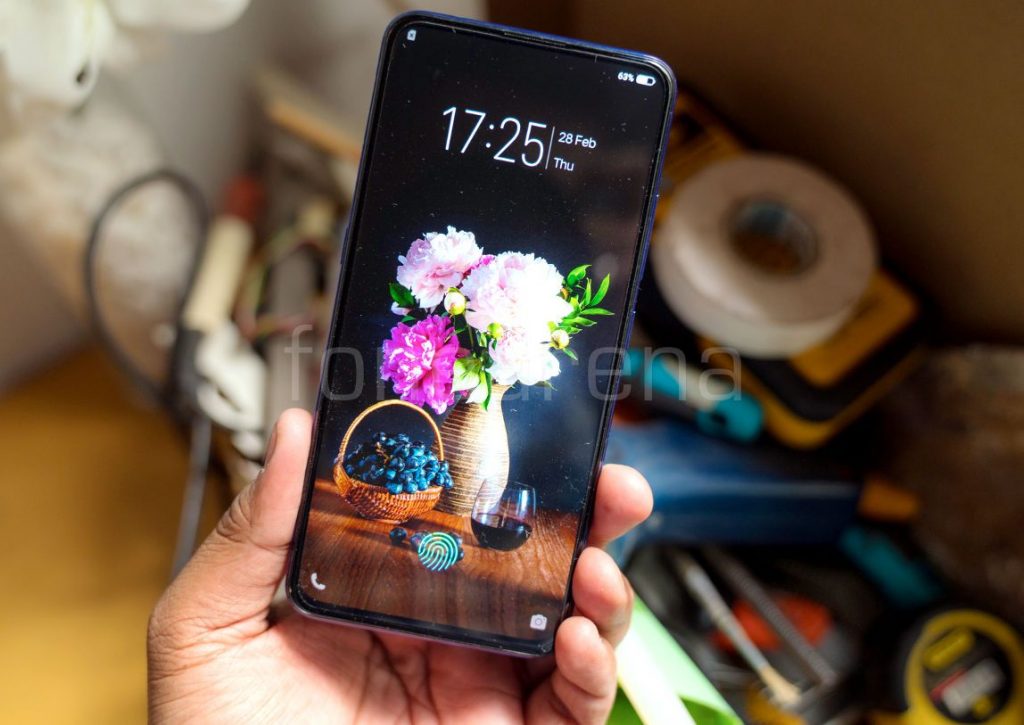 Vivo launched the NEX last year with a no-notch design, in-display fingerprint sensor and a pop-up camera in India, soon after it was introduced in China. The design received praises since the price was compelling, so the company has brought all these things at a cheaper rate to the Indian market with the V15 Pro a few weeks back. This is good in terms of innovation, and the specifications look good on paper, but is the phone worth the price? Let use find out in the review. 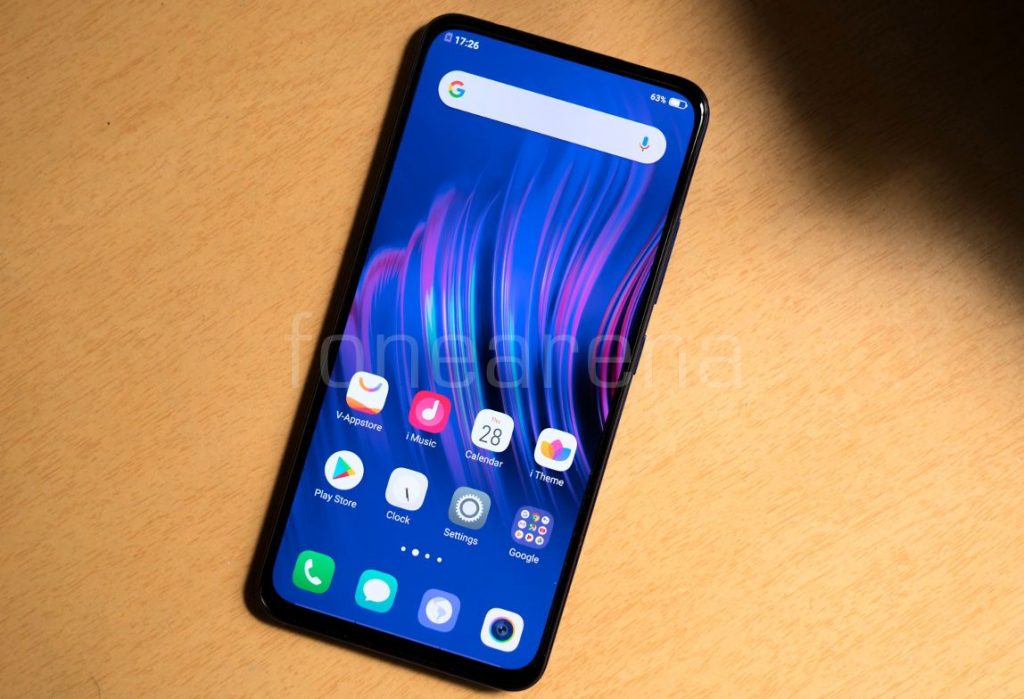 The phone packs a large 6.39-inch 19.5:9 Super AMOLED 2.5D curved glass screen with gentle rounded corners. It is a Full HD+ Ultra FullView Display with a pixel resolution of 2340 × 1080 pixels and a pixel density of about 403 PPI. The display is bright and the colors are vibrant since it has 100% P3 color gamut coverage. Sunlight legibility is good as well. The company says that the AMOLED panel is made of advanced E2 luminescent materials. Overall the display is gorgeous to look, thanks to the no-notch design and minimal bezels on the sides and the bottom.

You can adjust the display color temperature from the display settings, and there is also eye protection option that cuts out the blue light emitted from the smartphone that causes strain to eyes and also affect the sleeping cycle. Even though it doesn’t have a notification LED, you can enable lock screen notifications since this has an AMOLED screen.

Above the display there is an earpiece on the top edge. The usual set of proximity and ambient light sensors are hidden under the screen.  It also has a gyroscope and a magnetic sensor, otherwise known as a magnetometer. There is also a 32-megapixel pop-up camera with f/2.0 aperture that takes just 0.46 seconds to launch and lets you set custom pop-up sounds. Vivo says that the pop-up mechanism has been tested with forces of up to 15kg, while elevating 300,000 times without a glitch. 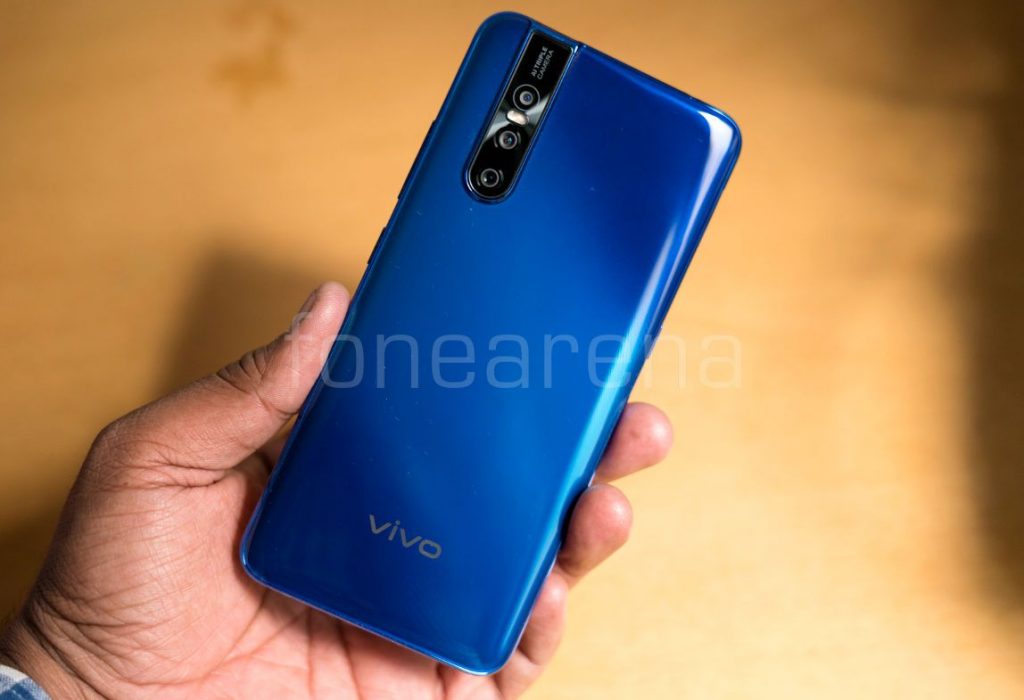 On the back there are triple rear cameras 48-megapixel  1/2.25″ main sensor (12MP Effective Pixel), 5-megapixel depth sensor and an 8-megapixel 120-degree Super wide angle sensor and an LED flash. The back cover has a glossy finish with ripple pattern and offers a gradient look. It looks premium and feels solid in hand, it doesn’t feel like glass. It also gets scratched easily on the opposite corners where the camera strip is present due to the bump, but the part around the camera doesn’t get scratched easily. The case which comes bundled with the phone offers good protect, but the phone gets a bit bulky since it makes the sides thicker compared to a normal transparent case. We have the Topaz Blue color version, and the phone also comes in Ruby Red version. 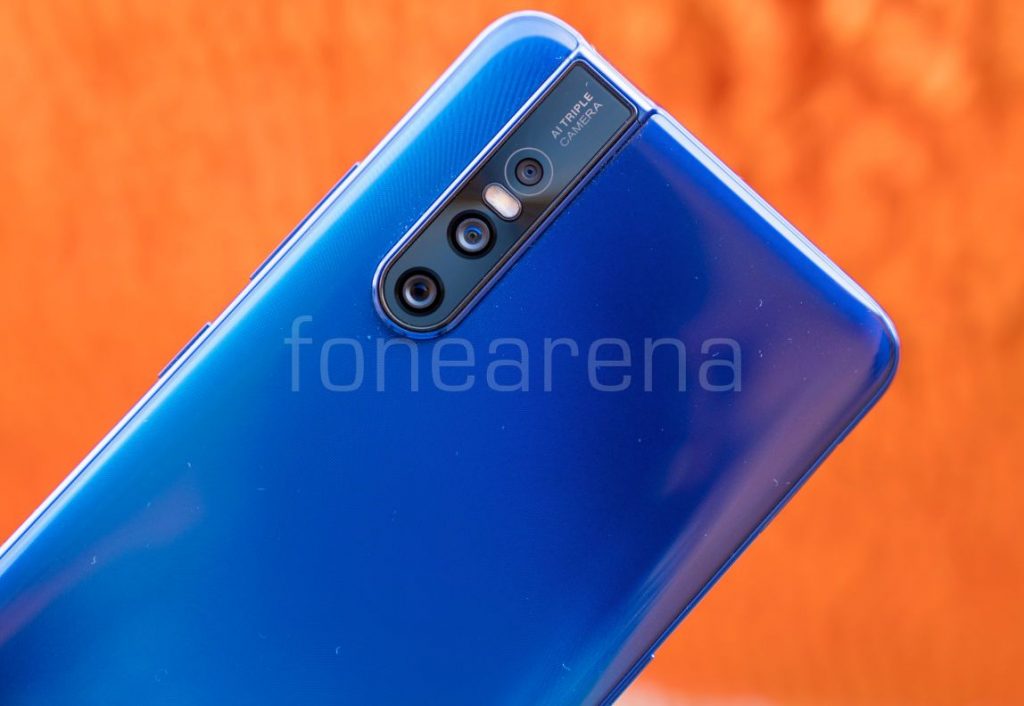 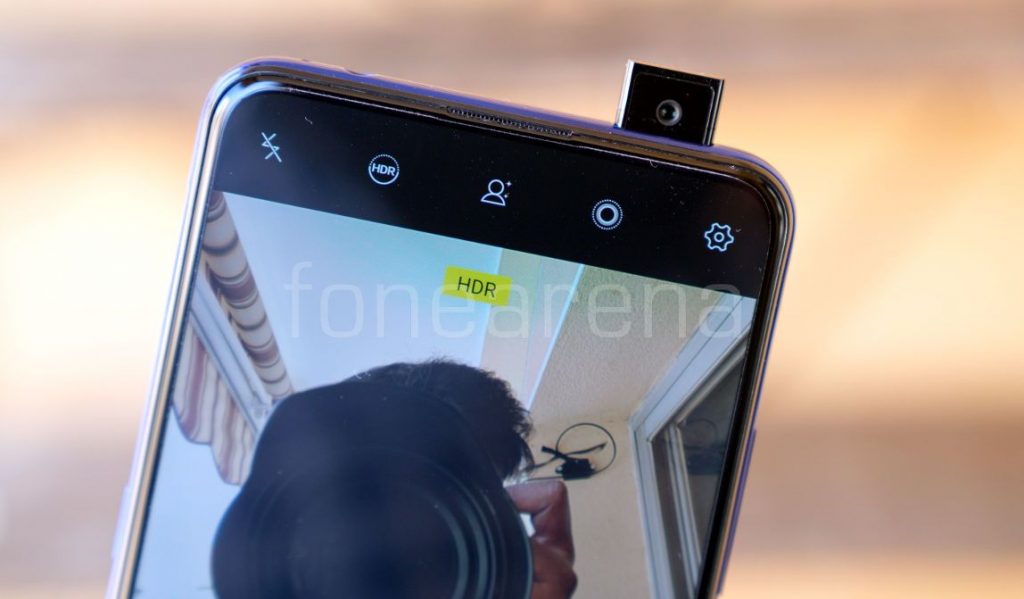 The camera UI is similar to other Vivo phones. On the top there is a flash toggle, HDR toggle, option to enable portrait light effect, Live Photo and Settings option where you can enable 48MP option. On the bottom there is Image Recognizer option, timer, Filters, portrait bokeh, ultra-wide toggle and option to switch to 19.5:9 aspect ratio from 4:3 easily. There is a preview window on the bottom left, shutter button next to it and front and rear camera toggle on the bottom right. You can also switch to several modes including DOC (Documents), PRO (to adjust ISO (0 to 3200), Exposure, Shutter Speed (1/12000 to 32 seconds), White Balance and focus), Panorama, Night mode, AI Beauty, Video and AR Stickers.

Coming to the image quality, the daylight images were good with good amount of details. AI and HDR shots came out well. 48MP mode doesn’t let you use any of these features, and the images doesn’t look impressive, so it is recommended to stick to 12MP mode. Ultra wide shots are good as well, and it cuts out the corners, but some images look tilted. Dual camera portrait shots were good and the edge detection was good as well.  Low-light shots are good, thanks to 4-in-1 Super Pixel technology and the night mode is even better making the images brighter offering more details. You can still find noise, but it is minimal. Daylight front camera shots are good as well with good amount of details, and the  portrait shots were decent as well.

Check out the camera samples below (Click the images to view full resolution samples). 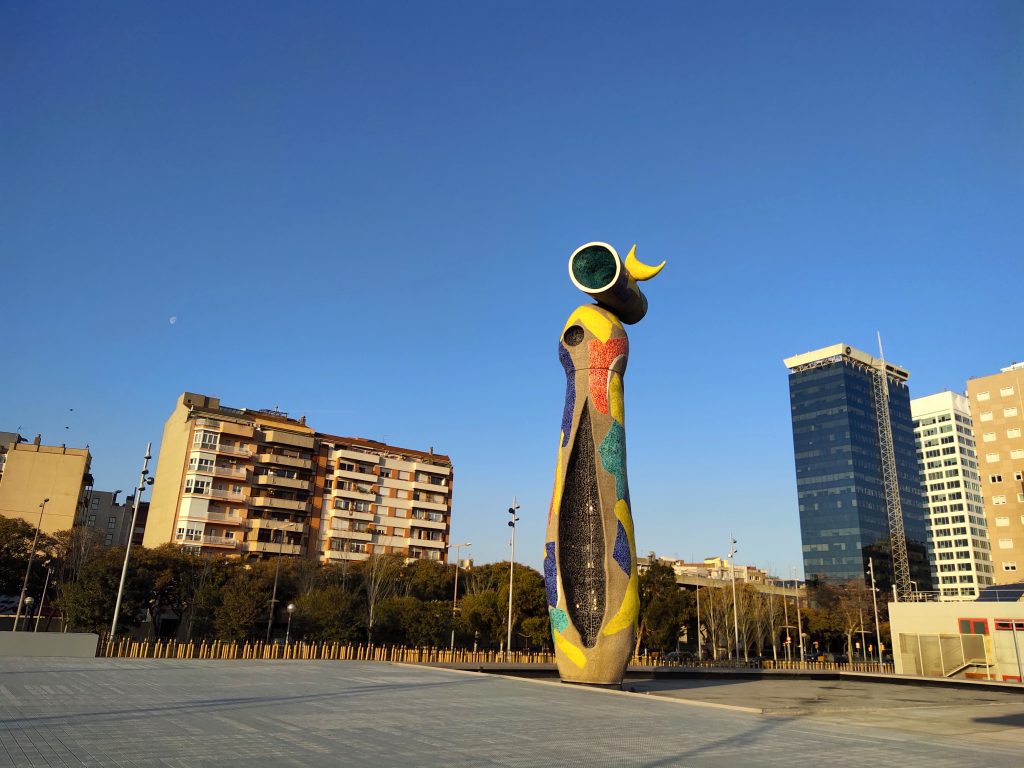 It has up to 4K 30 fps or up to 1080p 60 fps video recording as well as Slow-motion and time-lapse. Check out the video sample below. Also check out the complete set of camera samples here.

Coming to the software, the phone runs on Android 9.0 (Pie) with Android security patch for March 2019 and Funtouch OS 9 on top. It has got several updates since I started using the phone couple of weeks back. Vivo keeps pushing updates frequently improving things, which is good. Compared to Funtouch OS 4.5 in older phones the Funtouch 9.0 comes with a new UI design and color combination. It also finally brings Search function in the Settings. It still has iPhone-like gestures and Jovi Smart Scene assistant when you swipe to the left showing several cards. You still need to drag from the bottom to access the panel for toggle. Wish Vivo had moved this to the top like OPPO did with the Color OS 6.

It has Motorbike mode that can auto reject calls and mute notifications, has smart wake, smart turn on / off screen, on-handed mode, app clone and a lot of features. The updated Game mode supports more functions, such as Prevent accidental touches and Performance preferred.

Apart from the usual set of utility and Google apps, it comes pre-loaded with a lot of apps such as Facebook, WhatsApp, Gaana, UC Browser, Amazon, NewsPoint, PhonePe and Paytm. These apps can be uninstalled, but comes back after reset.

The phone has sixth-generation in-display fingerprint sensor that promises 0.37-second unlocking. It immediately unlocks phone just by keeping your finger on the sensor, and the fingerprint area lights up when the screen is off. The phone also has face unlock  that can unlock the phone in 0.55 seconds by scanning 1024 facial points. But it is not as secure as fingerprint since it can be unlocked with a photo. It also doesn’t work if you use sunglasses or hats.

The default Music Player also has equalizer and DeepField sound effects. It also has FM Radio with recording. Audio through the speaker is decent, but it could be better. Since the speaker is present on the bottom, audio doesn’t get muffled when the phone is on a flat surface. Audio through earphones is good as well. This doesn’t have Widevine L1 support so you can’t play HD content on Amazon Prime Video, Netflix and other streaming apps.

It has the usual set of connectivity features such as 4G, Wi-Fi 802.11 ac (2.4 + 5GHz), Bluetooth 5, GPS + GLONASS. It also has USB OTG support that lets you connect external drives. It has 4G connectivity and also has Voice-over-LTE (VoLTE) support for Reliance Jio, Airtel and others and supports Dual 4G VoLTE that lets you use 4G on both the SIMs.

The dialer and messaging UI are similar to other Vivo smartphones. With the latest Funtouch OS update, Messages supports identifying malicious websites, risky links and other information. Since this is a dual SIM phone, you get the option to select either SIMs when calling or sending a text message. We did not face any call drops and the earpiece volume is good. 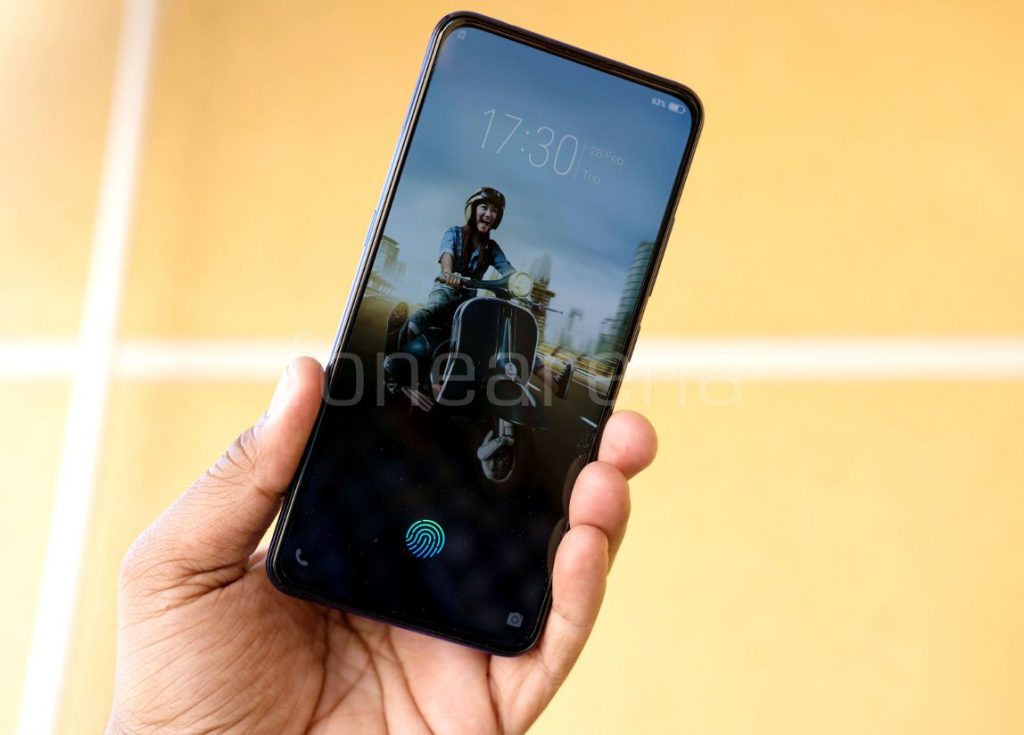 Coming to the performance, the phone is powered by an Octa-Core Qualcomm Snapdragon 675 64-bit 11nm Mobile Platform that has two Cortex A76-based Kryo 460 CPUs clocked at 2GHz per core and other six Cortex A55 Kryo 460 CPUs are clocked at 1.7GHz per core, comes with Adreno 612 GPU with support for Open GL ES 3.2, Open CL 2.0, as well as Vulkan graphics and 6GB LPDDR4x RAM.

We did not face any issues or frame drops in the graphic-intensive games, and PUBG works in full graphics. Similar to most phones, it gets a bit warm on intensive gaming and 4G data use, but it doesn’t too hot. That said, check out some synthetic benchmark scores below. 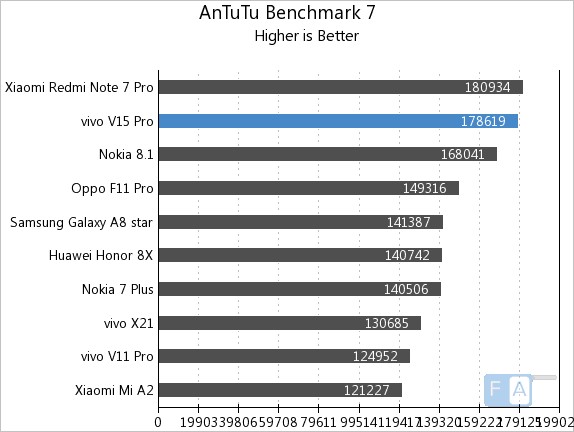 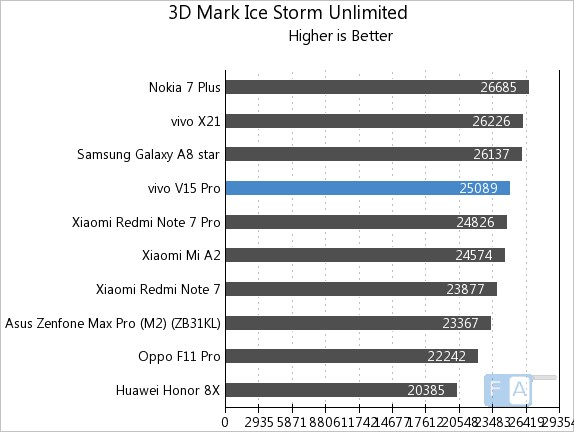 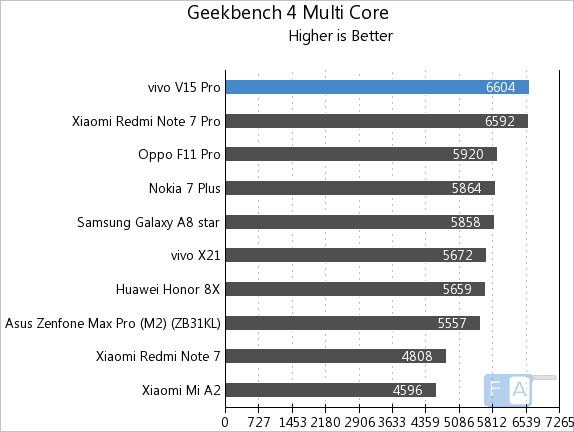 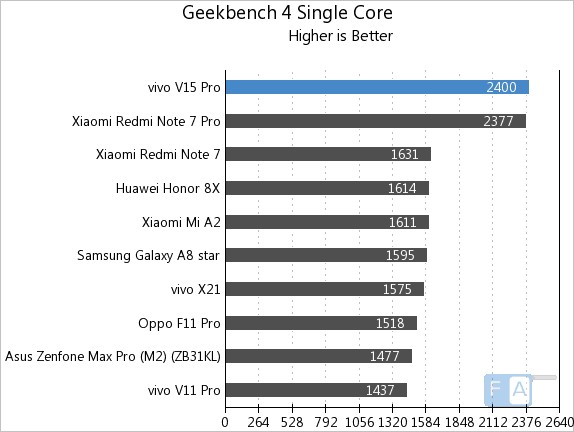 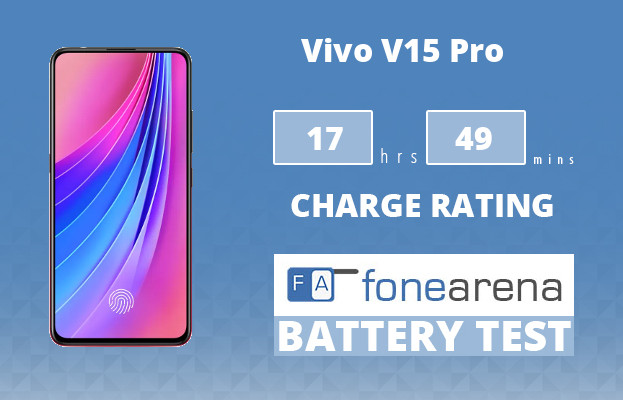 Coming to the battery life the 3700mAh battery lasts for a whole day even with heavy use and with average use it lasts more than a day.  Since the phone has support for 18W Dual Engine Fast Charging, it takes about 1 hour and 50 minutes to charge it from 0 to 100%, and 0 to 50% takes 37 minutes. Even though the phone comes with support for fast charging, it has a micro USB port which is a bit disappointing since some phones that are cheaper than this come with a USB-C port.

It achieved One Charge Rating of 17 hours and 49 minutes in our battery test, which is good for a phone with a 3700mAh battery. We will bring you the complete set of battery life test results soon.

No-notch Super AMOLED screen with in-display fingerprint scanner and pop-up camera is definitely a trend for this year since a lot of companies have started adopting a similar design at more competitive pricing. Lack water or splash resistance and a glass body are a definite miss, but an attractive design, good cameras and smooth performance with Snapdragon 675 and 6GB of RAM are impressive. However, you have to manage the custom UI and live with the micro USB port.

Priced at Rs. 28,990, the phone is available on Amazon.in, Flipkart and other online and offline stores with a lot of offers. Vivo is one of the top 5 smartphone companies in terms of unit shipments since it also targets the offline market in addition to online sales. To summarize, here are the pros and cons of the smartphone.