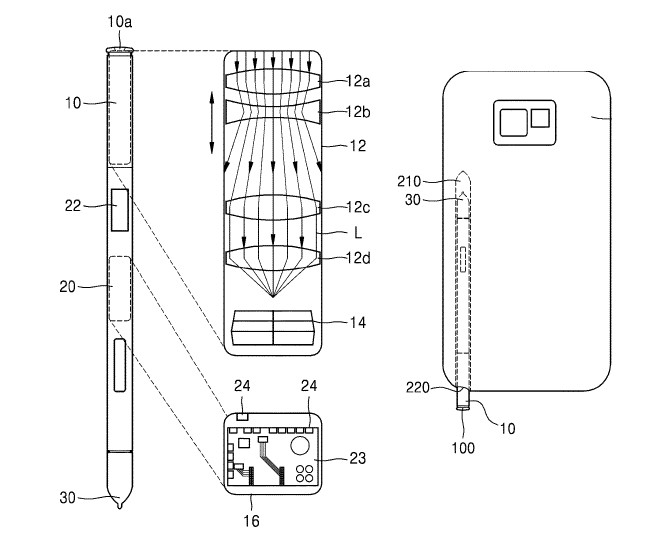 The U.S. Patent and Trademark Office published a patent for Samsung Electronics hinting at the company’s brand new plans for the S Pen. This patent focuses on the S Pen doubling as a camera that could provide users with a vastly superior optical zooming system in contrast to the digital zoom.

The patent further notes that in general, smartphones are used more for taking photos and an “optical zooming” function provides superior quality. However, thanks to their thin designs, smartphones are restricted to digital zoom. To get around this problem, Samsung’s newly granted patent illustrates that the company might be considering adding a camera with an optical zoom inside a future Note Smartphone S Pen.

Since Samsung started innovating the S Pen thanks to the newly added button that allows users to click on to take photos with their phone and control a slide presentation, it seems that the Samsung’s granted patent is likely giving us a peek at what to expect of the next-gen S Pen. The camera lens is fit into the upper chamber of the S Pen and a control key that could control the zooming feature.

More specifically, Samsung’s new optical system may include at least one lens or maybe even more. The patent figure points that this next-gen pen would come with an optical system, an image sensor, a control key, and controller. As Samsung extended the use cases of the S Pen, the granted patent also notes that it may provide a slot in future notebooks and desktop displays to slip the S Pen into. Samsung filed for this patent back in late February 2017 and it was granted today by the U.S. Patent and Trademark Office.