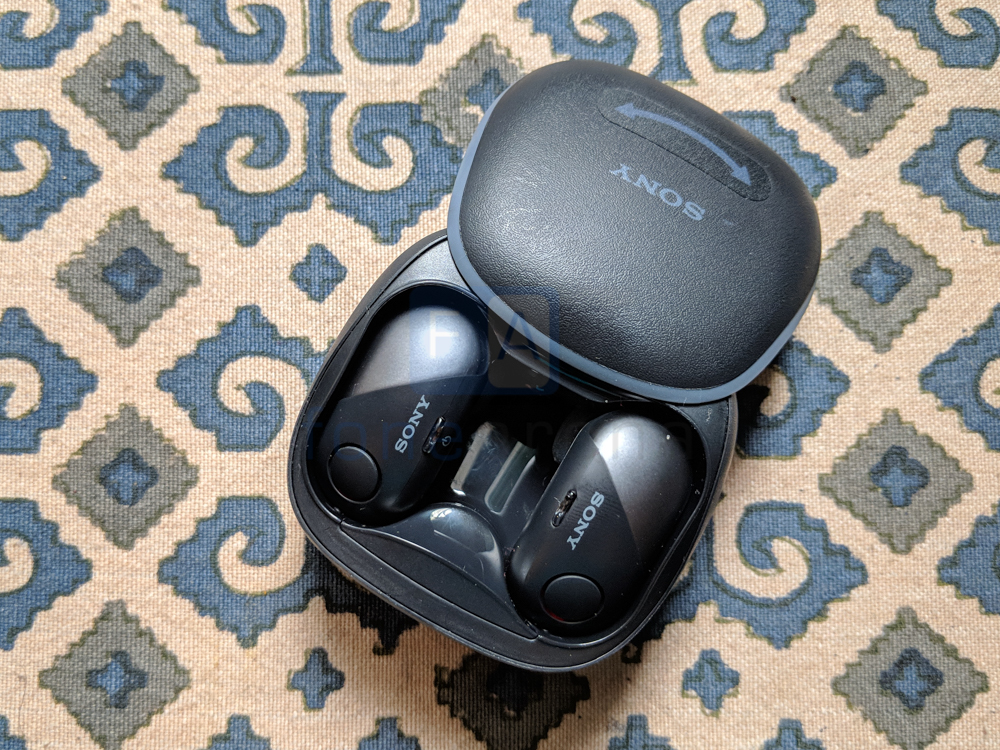 Earlier this year, we reviewed the WF-1000X, Sony’s first foray into truly wireless audio. A premium headset with a focus on audio quality and design, we found it to be an acceptable first generation offering. The all new Sony WF-SP700N on the other hand is quite a different product. Sony claims that this is the first truly wireless product that is both splash proof and offers active cancellation. Does it fare any better than competing headsets? Lets find out.

Compared to the slim and sleek case of the WF1000X, the Sony WF-SP700N is packed in a pretty bulky charging case. It might be shorter in length but the pebble like shape creates a bulk in pockets and certainly won’t fit in skinny jeans.

Where most truly wireless headphones have a charging case that flips open, this one slides to the side. There’s something very satisfying about flicking it open. The cover even has a bit of magnetic action so pulling it halfway will cause it to close up on its own. Unfortunately, the plastic is extremely flimsy. This thing will definitely break unless you’re careful with it. 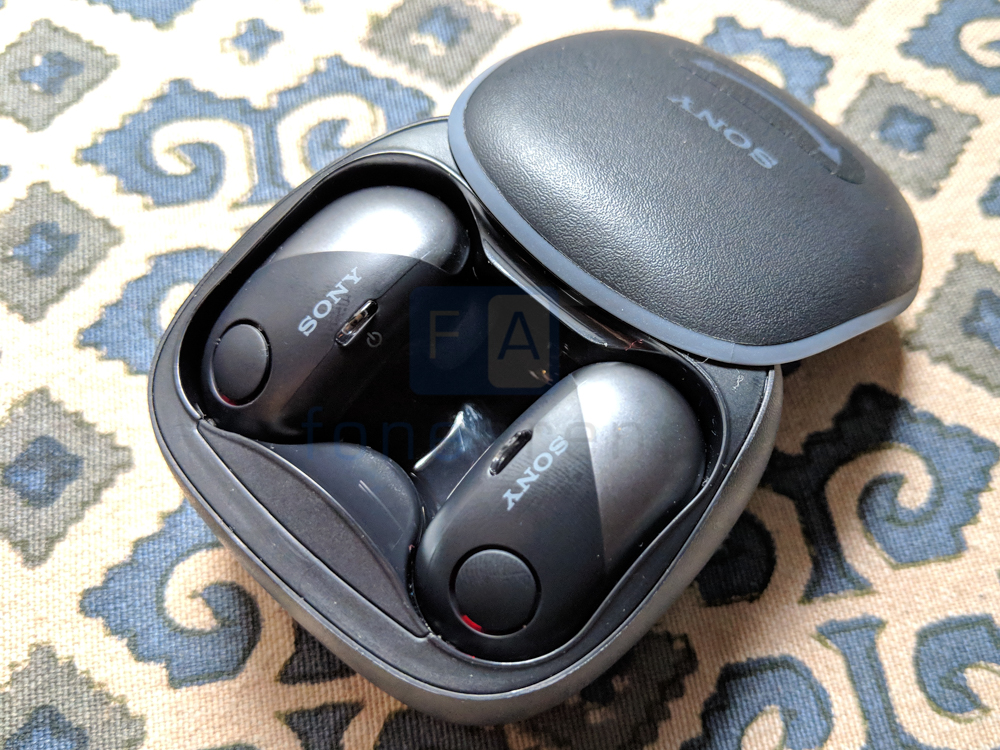 Slotting in the earphones too is ever so slightly harder, a side effect of the more compact case. You’ll have to get the ear hooks tucked in first before pushing down on the earpiece to make sure there is adequate contact with the charging pins. You’ll know that you’ve got it right if you spot a red glow indicating charging status in the earphones. 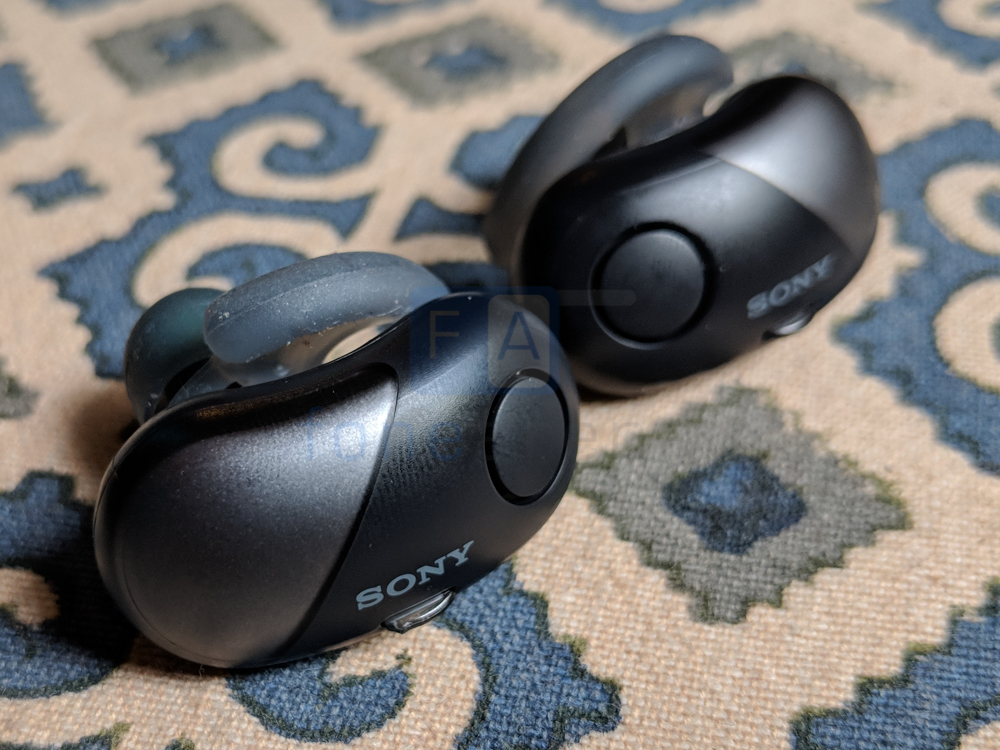 The earphones themselves are a complete departure from the stylish WF-1000X. Now that’s not to say that the SP700N doesn’t look good. It’s just going for a more sporty look. There’s a dual tone silver and grey finish going on here. The entire earpiece can be described as curvy. Not just the edges, the entire body is curved inwards. Honestly, the design is very reminiscent of standalone bluetooth headsets. 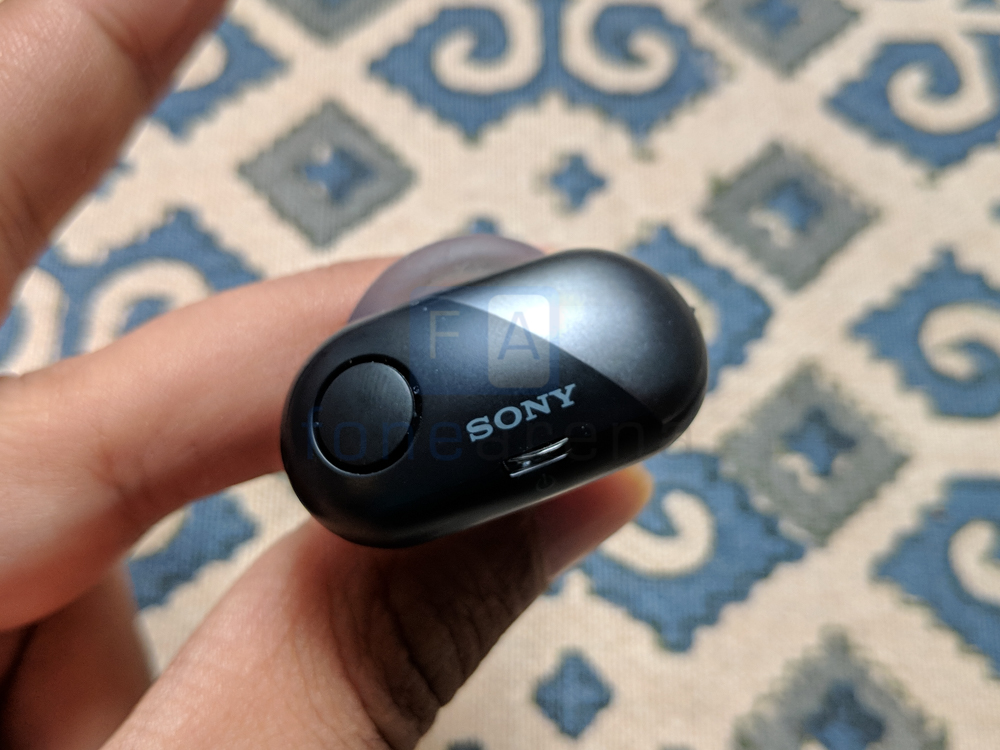 Both the earpieces have a button on them. The one on the right earpiece functions as a toggle between the ambient and noise cancellation modes. Meanwhile, the button on the left side controls play and pause modes. You cannot adjust volume from the headset, a very curious commission. Two circular vents on the earpieces look like buttons but aren’t. 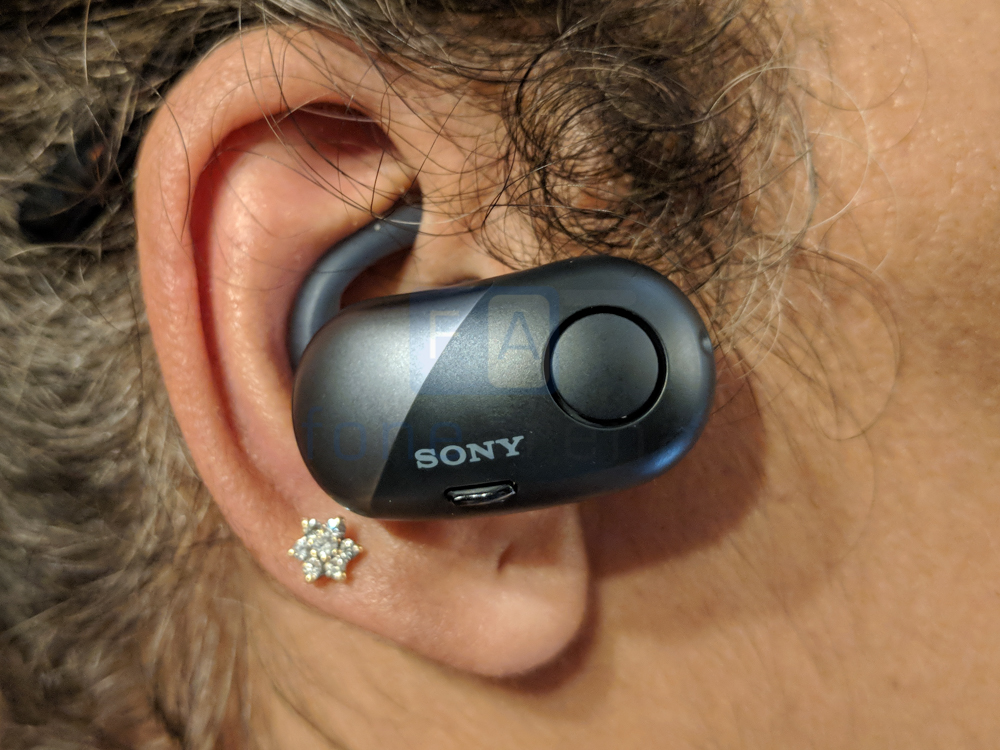 The WF-SP700N ships with three different silicon tips as well as ear hooks. The ear hooks come in handy given the sports oriented nature of the headset. Combined with the general shape of the earphone, the Sony WF-SP700N ranks up there amongst the most comfortable headsets we’ve tried recently. From the length of the stalk to the fit of the provided tips, even the general weight of the SP700N, these are extremely comfortable and you won’t have any issues with wearing them for hours on end. Unfortunately that doesn’t hold true if you decide to lie down and listen to music. The earbuds are simply too big to wear when you are lying down on your side.

There’s nothing balanced about the sound signature on the Sony WF-SP700N. Like many mainstream Sony headsets, the focus is on bass and the earphones deliver oodles of it. The sound signature is musical, generally pleasing for listening to contemporary pop music. Audiophiles steer clear though.

The SP-700N delivers enough clarity across the mids and highs though these aren’t the most resolving earphones by a large margin. The bass is boomy and a bit bloated. You can adjust this via the equaliser in the Sony Headphone Connect app. In fact, we’d highly recommend trying out the various equalisation options to see what works better for you.

We tried out a bunch of albums like the excellent Pieris by Marco Mezquida. The audio reproduction was good enough for on the go listening but there was a lack of depth and the soundstage was nothing extraordinary.

Tracks like In My Feelings by Drake is where the SP700N shined. There’s an impressive amount of bass on offer which works well for hip hop and R&B.

On tracks like Demon of the Fall by Opeth, we felt a distinct lack of the bass slam. All in all, the WF-SP700N are decent enough for truly wireless, sports focussed earphones but they are not what I’d recommend if you are aiming for critical listening. Moreover, the Sony WF-SP700N supports only SBC and AAC codecs for streaming so high quality audio transmission is out of the picture.

Passive noise isolation on the Sony WF-SP700N is pretty good but will also depend entirely on the fit of the included eartips. There’s active noise cancellation on board too but it is a far cry from what you’d experience on Sony’s own WH-1000XM2. That’s not surprising of course given the size difference between the two models. Anyways, noise cancellation does work well enough to the point where it’ll drop down ambient noise by a few decibels. Crank up the volume a little bit and you’ll be completely cut off from the outside world. It isn’t good enough to completely cut outside traffic noise though. The SP700N also offers an ambient noise mode which is similar to the modes offered on other Sony headsets. The idea here is to pipe in outside noise while you are out for a walk or run so that you can hear incoming traffic. It works as you would expect. The voice focussed mode however isn’t as effective. The voice centric ambient sound mode is supposed to let you hear someone talking while still cutting down on ambient noise. In our experience, the headset struggled to differentiate between the two and simply piped in all surrounding sounds.

For a truly wireless headset, battery life on the SP700N is on the shorter end. We got about 2.5 hours of use with active noise cancellation and the volume turned up. You might be able to get close to the 3 hours promised by Sony if you turn off noise cancellation and listen at lower volumes. The charging case includes a built in battery good for another 6 hours. More than the earphones, we’re disappointed by the limited battery life in the case. Most competing headsets ship with cases promising at least 10 hours of spare battery life.

The Sony WF-SP700N is a great fitness oriented headset. The comfort levels are top-notch though the lack of volume controls is perplexing to say the least. Sound quality is good enough though we won’t recommend these if just listening to music is your top priority.

As a runner, truly wireless headsets have been a revelation. The freedom of not having to worry about cables hanging down your neck or getting caught up in hair is fantastic. The Sony WF-SP700N slots in very well in the category by offering IPX4 sweat resistance, a sound signature that works great for workouts and active noise cancellation to boot. Priced at Rs.12,990, the Sony WF-SP700N is definitely one to consider if it fits your use case. The Jabra Elite 65T and Bragi The Headphone are others to consider in the price range. You can get the Sony WF-SP700N from Amazon.in.