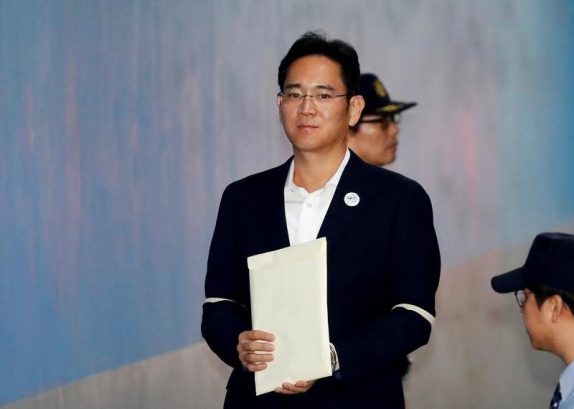 A South Korean appeals court on Monday has suspended Samsung’s Heir Jay Y. Lee’s jail term after a year’s detention over the corruption scandal that brought down the former president. The Seoul High Court jailed Lee for two and a half years, reducing the original term by half, and suspended the sentence for charges including bribery and embezzlement, meaning he does not have to serve time.

Jay Y. Lee was in detention since last February and the President Park Geun-hye was dismissed in March 2016 in a case that brought scrutiny to the nature of the ties between South Korea’s chaebols – big family-owned corporate groups – and its political leaders. However, Park, denied wrongdoing and is currently standing trial accused of bribery, abuse of power and coercion.

Back in August, a lower court had convicted Lee for bribing Park to strengthen his control of Samsung Electronics. The court back in the day said that Samsung’s financial support for entities backed by a friend of Park‘s, Choi Soon-sil, constituted bribery, including 7.2 billion won ($6.4 million) to sponsor the equestrian career of Choi’s daughter.

On Monday, the Presiding senior judge Cheong Hyung-sik called the nature of Lee’s involvement in Samsung’s monetary support for Choi a “passive compliance to political power”. Samsung didn’t comment on the matter yet. Lee with his year-long detention coming to an end, he might continue with his existing roles including director of Samsung Electronics.

According to law firm Cho & Partners, Lee he has been found guilty of some lesser charges and is prohibited from traveling outside South Korea without a judge’s approval. Though Lee didn’t ask for President Park’s help directly, the 2015 merger of two Samsung affiliates did help cement Lee’s control over Samsung Electronics said the lower court in August ruling.

However, Lee’s defense lawyers had challenged the logic and said that the merger was done for business reasons. There is, however, a chance for this issue to stick despite Lee being set free says lawyers.