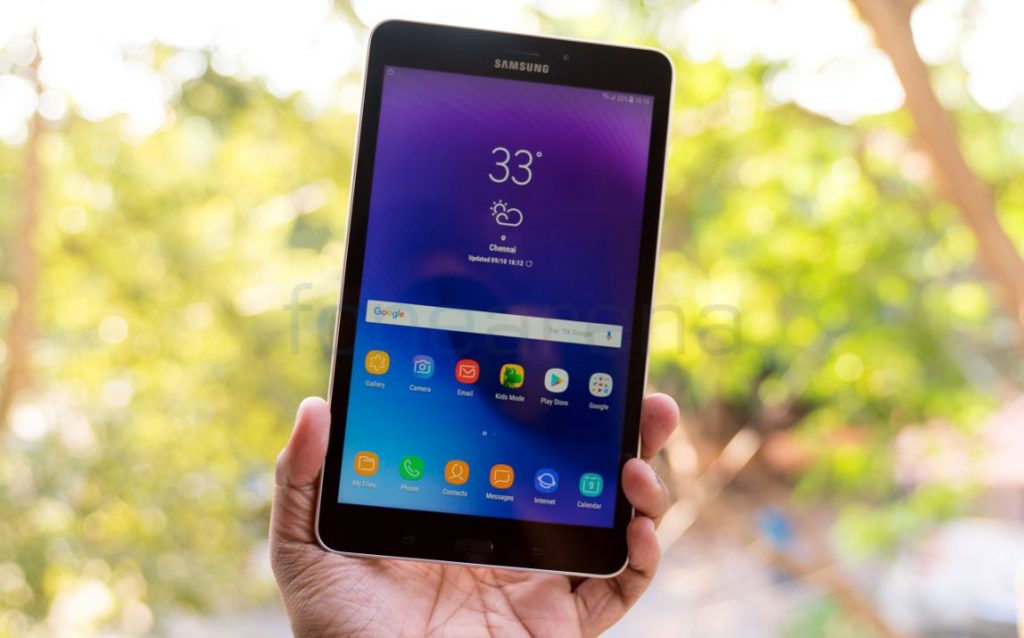 Samsung launched the Galaxy Tab A 8.0 (2017) in India back in October this year. This comes after the Galaxy Tab A 2016 that was introduced last year but the company did not decide to launch that in India, after the Samsung Tab A (SM-T355Y) that we had reviewed back in 2015. This comes with support for voice calling capabilities similar to earlier tablets in the ‘Tab A’ series, but this is the first to include VoLTE support. It also packs a huge 5000mAh battery. Is it worth the price? Let us find out in the review. 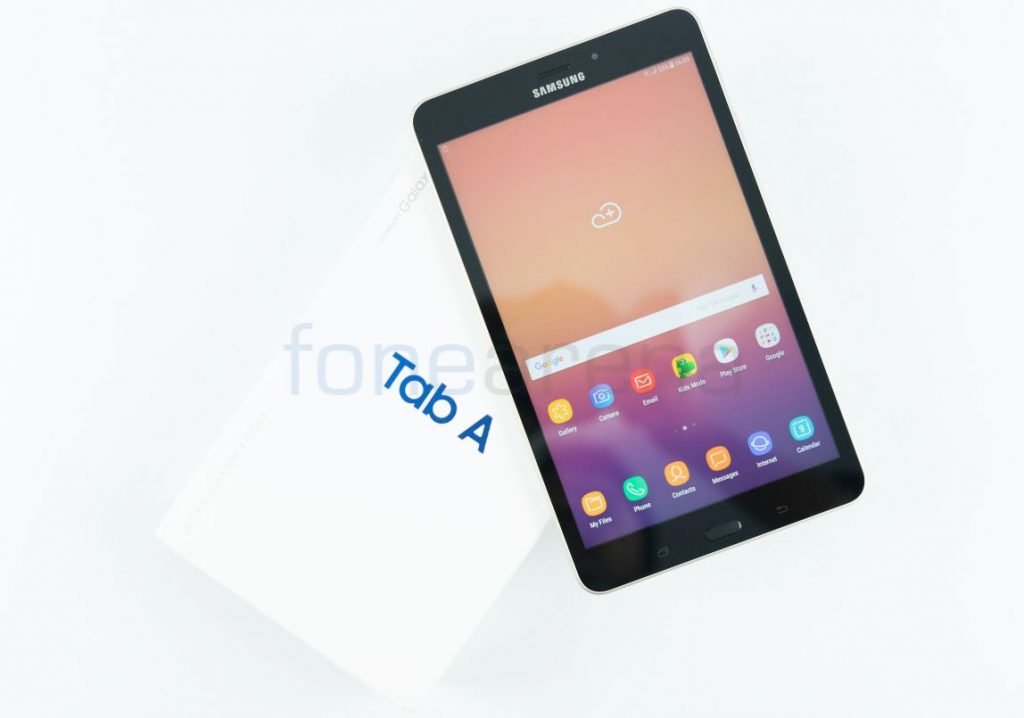 We unboxed the Tab A 2017 recently, check out the video. 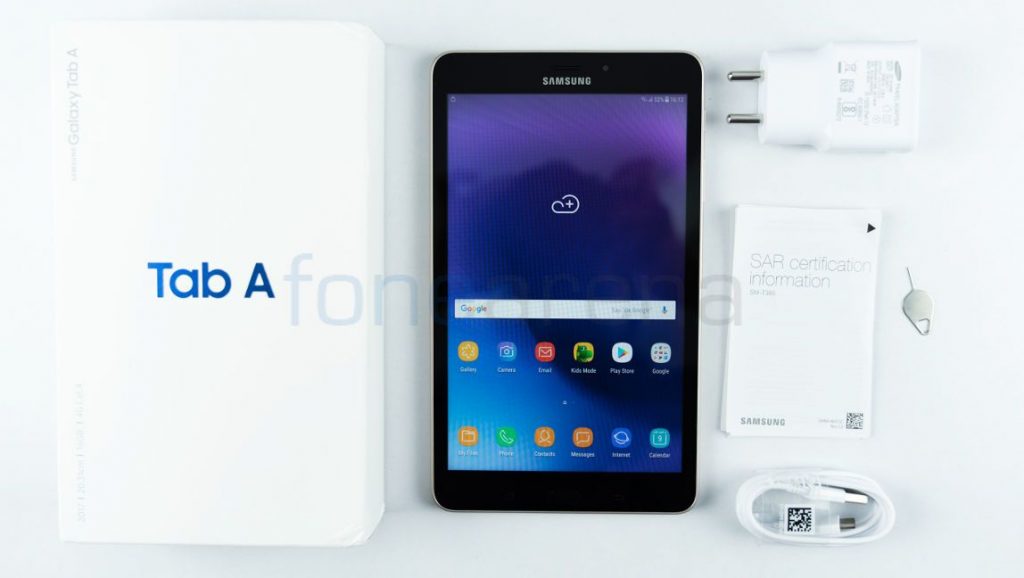 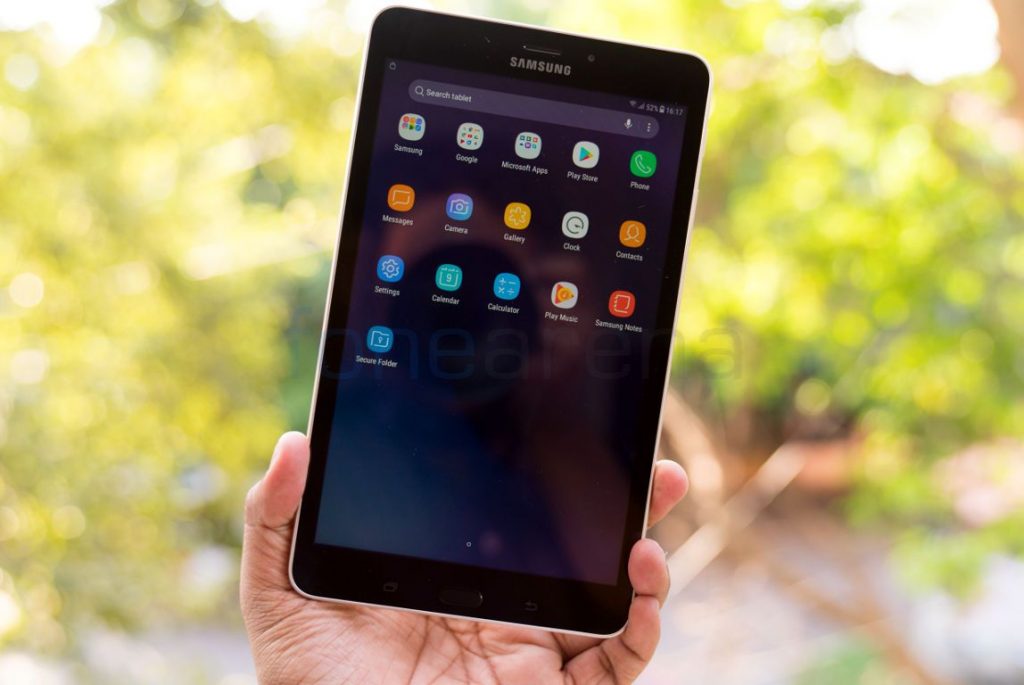 The tablet has a 8-inch TFT display at a resolution of 1280 by 800 pixels at a pixel density of just 188 PPI. Wish the company had offered a 1080p display since the content is not sharp with the WXGA screen. The display is a bit glossy so the sunlight legibility is not the best, but the viewing angles are decent.

Since the display has 16:10 aspect ratio and is 124.1mm wide, it is good for reading and for single-handed usage, but it looks awkward using a huge tablet for voice calls. It is slightly heavy compared to most other tablets so you can’t hold it for long comfortably. Samsung doesn’t say if it uses any kind of scratch-resistant glass for protection. 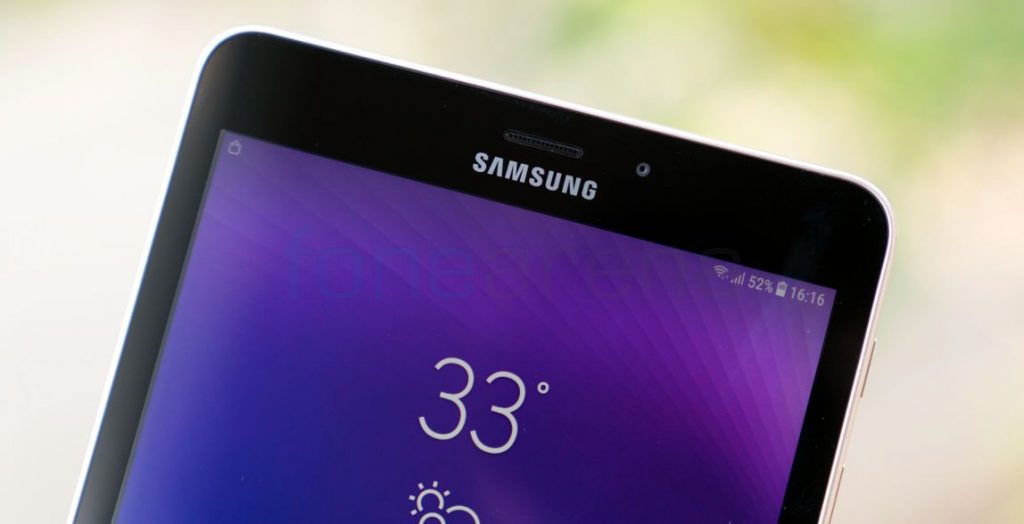 Above the display there is an ear piece. Next to it is a 5-megapixel camera, which is good for selfies and video chats. It can record videos at 1080p resolution. It doesn’t have proximity sensor so when you make a call, the screen doesn’t turn off to save the battery, but actually locks itself. It also lacks an ambient light sensor for auto brightness adjustment. It only has accelerometer for auto orientation and  lacks notification LED, gyroscope and magnetometer or magnetic sensor. Most tablets in the price range at least have ambient light sensor. 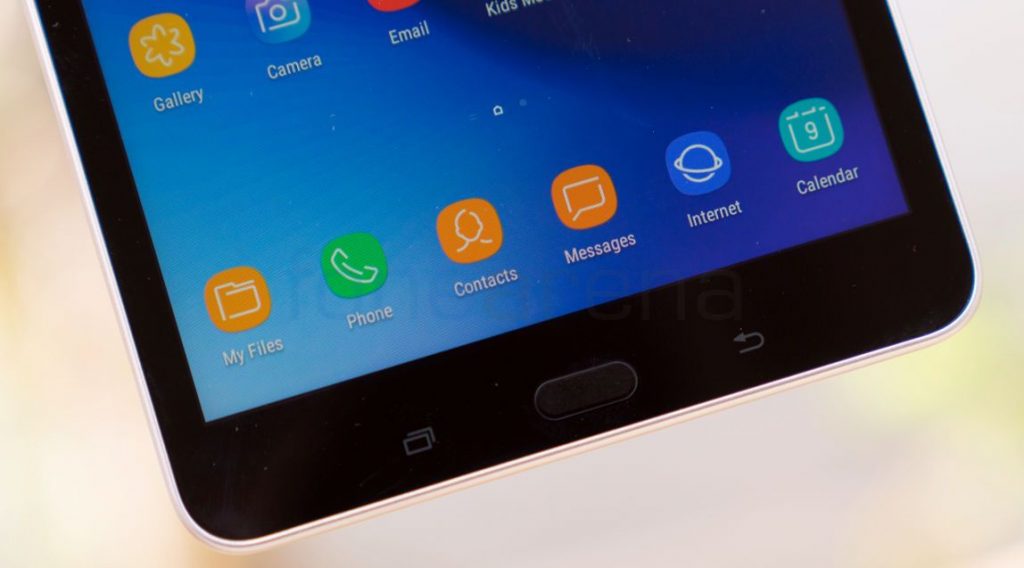 Below the display, there is Samsung’s signature home along with menu and back buttons on either sides. These are not backlit, neither offer haptic feedback when pressed.

It has a power button on the right side along with a volume rocker and the SIM slot with a microSD slot. On the top there is a 3.5mm audio jack and a secondary microphone. You can also see the Qualcomm 4G sticker since the tablet is powered by a Snapdragon SoC. On the bottom there is a loudspeaker grill, primary microphone and a USB Type-C port. 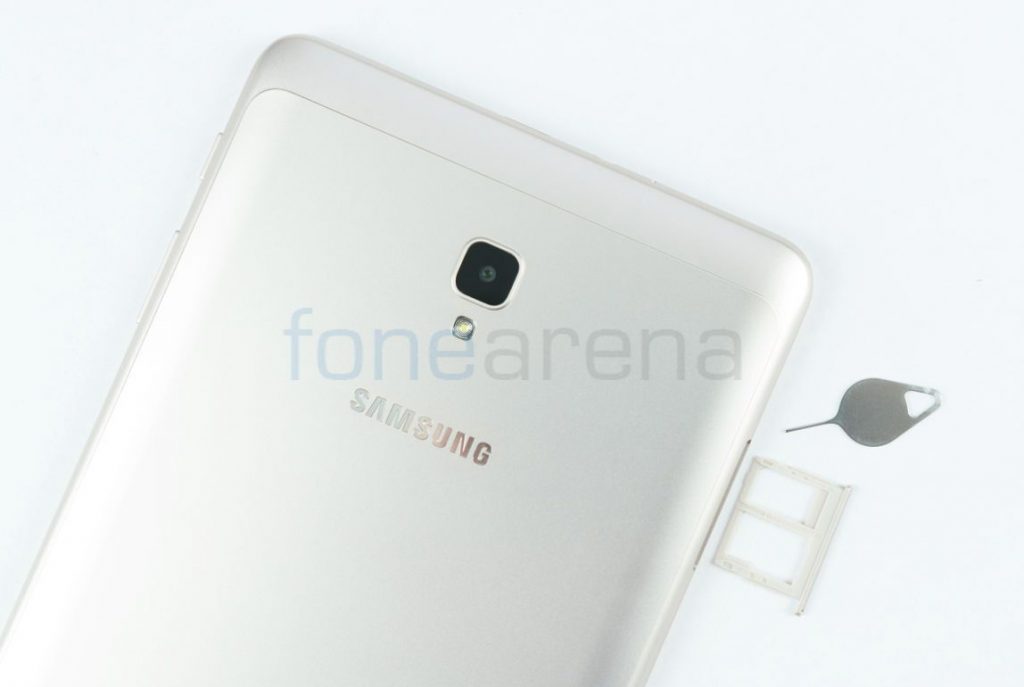 The nano SIM slot is present on the left side along with a microSD slot that is arranged in a single tray. 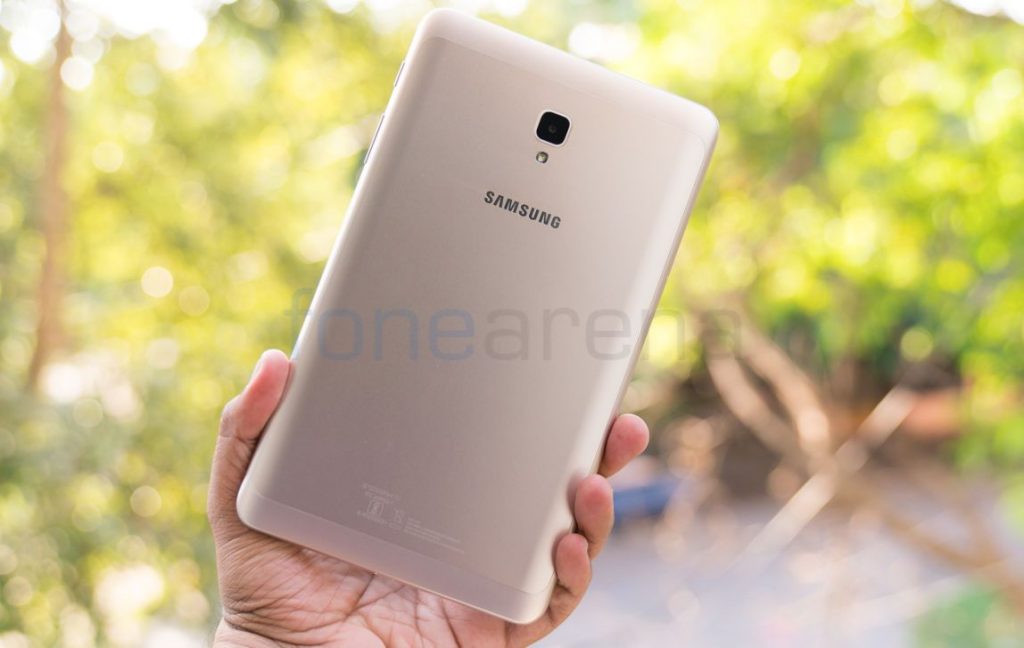 The tablet has a metal-like finish at the center part of the back, and plastic finish on the top and bottom where the antennas are present. On the back there is an 8-megapixel autofocus camera with LED flash below that. There is also a Samsung branding. Under the back cover it packs a huge 5000mAh battery so it weighs 364 grams, making it heavier than the earlier Galaxy A series tablets. Overall the build quality is decent and could have been better. 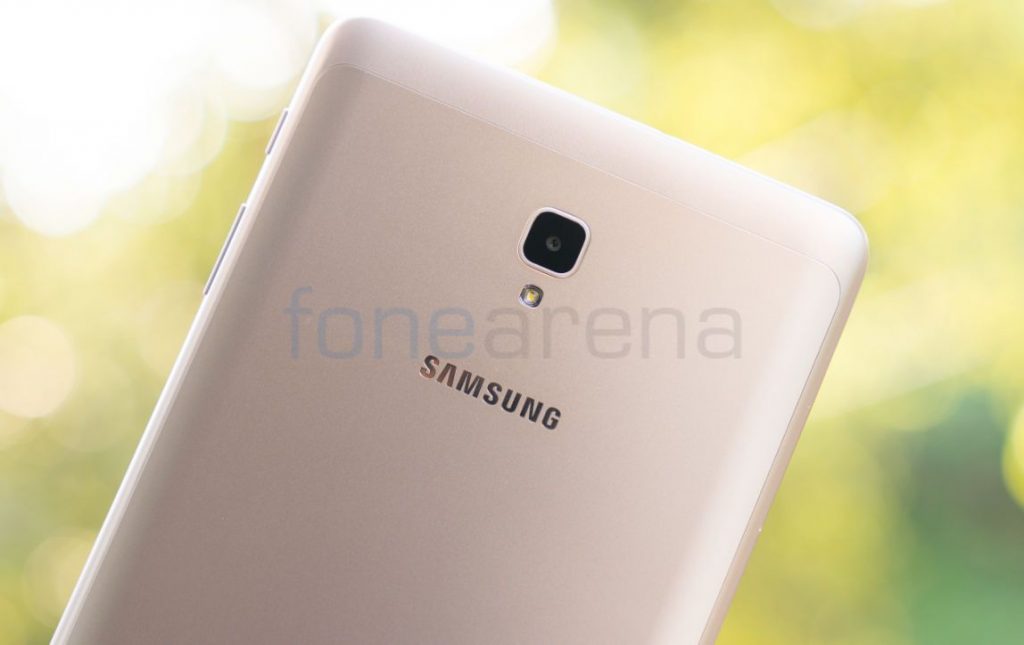 The 8-megapixel auto-focus rear camera  captures good images in daylight for a tablet, but some images were dull in cloudy conditions. Macro shots were decent, thanks to f/1.9 aperture sensor. It also has HDR option and the LED flash helps in low-light conditions. It has different filters and modes including Pro mode, Panorama, Continuous shot, Night, Sports, Sound & Shot and Animated GIF. It can record videos at 1080p HD resolution at 30 fps. The video is decent and audio is crisp, thanks to the secondary microphone.

Check out some camera samples (Click to view the full resolution image). 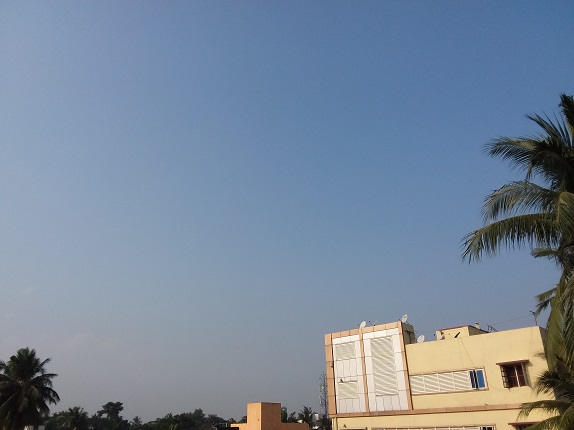 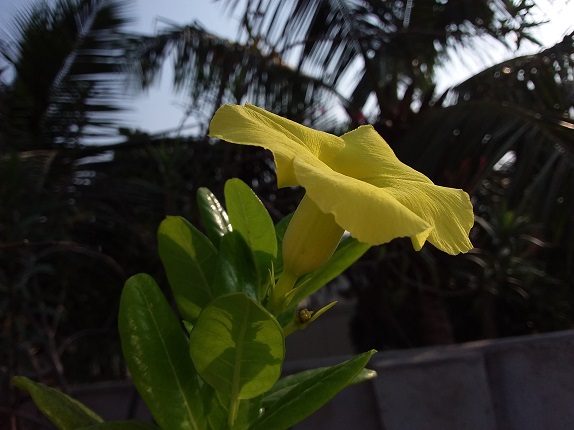 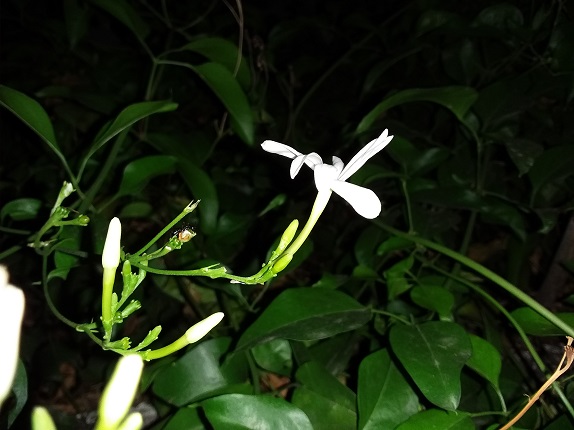 Coming to the software, it runs on Android 7.1.1 (Nougat) with Android security patch for August 2017. Samsung doesn’t say if the tablet will get Oreo update. On the top of Nougat, it has Samsung Experience version 8.5, which is the company’s new UX that is more refined compared to its TouchWiz UX.

The drop-down notification shade shows eight toggles on the top, and more when you swipe down again. You can easily change the button order and the button grid (4×3, 5×3). There are also brightness control slider.

It has vertical swiping interface by default instead of separate apps button, so to navigation between the home screen and app tray you need to swipe up or down. You also have option to add apps screen button to the home screen. You can also simultaneously move multiple apps into a folder easily. You can tap and hold an app icon to open a quick options menu that lets you perform tasks such as uninstalling apps without having to open the app. App icons and typography have also been changed according to the new design language.

The advanced features option has Games Launcher that gathers your games downloaded from Play Store and Galaxy Apps into one place for easy access . Similar to other Android devices it also has Multi Window mode that was first introduced by Samsung several years back. 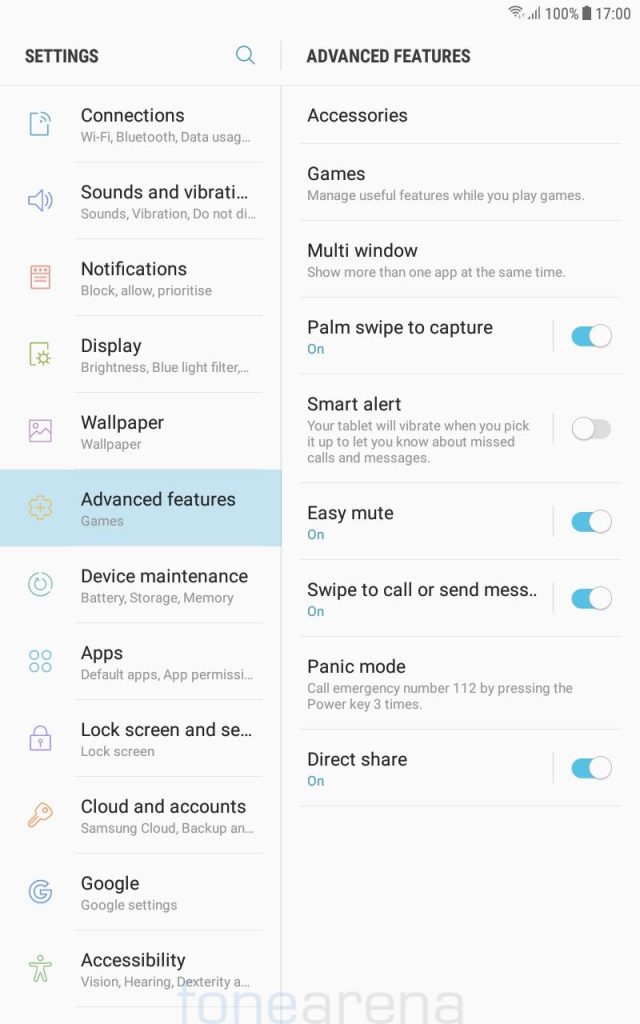 Other options include Palm swipe to capture screenshot, Smart alert to set the device to alert you if you have missed calls or new messages when you pick up the device, Easy mute to mute incoming calls or alarms by using palm motions or facing the device’s screen downwards, Swipe to call or send message, and Panic mode to Send SOS message by pressing the Power key three times, including option to sound recordings along with the message to the recipients, and Direct Share.

The Device maintenance option lets you manage your device’s battery life, storage, RAM usage, and security all in one place. The Samsung Secure Folder that lets you save your personal data and information. Out of 2GB of RAM, you get 1.85GB of usable RAM, out of which about 936MB of RAM is free when the default apps running in the background. Out of 16GB of internal storage, 9.5GB of storage is usable. Wish they had offered 32GB stores, but there is microSD expansion slot that accepts cards up to 256GB.

It also has Bixby Assistant that was first introduced with the Galaxy S8 series. You can slide to the left to view the Bixby screen. It has Home and Reminder features. Home lets users see the content they care most about and Reminder helps users remember important events and to-do tasks.

Apart from the usual set of utility apps and Samsung Apps, it comes with Microsoft Apps – Word, Excel, PowerPoint, OneDrive, OneNote and Skype. It doesn’t have any other bloatware.

Google Play Music is the default music player. It has equalizer, Surround and Tube Amp Pro sound effects that can be enabled from the settings. All these improve the audio when listening through earphones. Audio through the headset is good and the loudspeaker output is good as well. The built-in video player can play a range of formats. It doesn’t have FM Radio.

The dialer and messaging have a familiar UI. Messaging has two-pane layout since this is a tablet. It comes with Samsung keyboard as default. There are no call drops and the earpiece volume is good.

The connectivity options include, WiFi a/b/g/n (2.4 + 5 GHz) HT40, Bluetooth 4.2 and GPS + GLONASS / Beidou.  It has 4G connectivity with support for Voice-over-LTE (VoLTE) support for Reliance Jio. It also has USB OTG support. 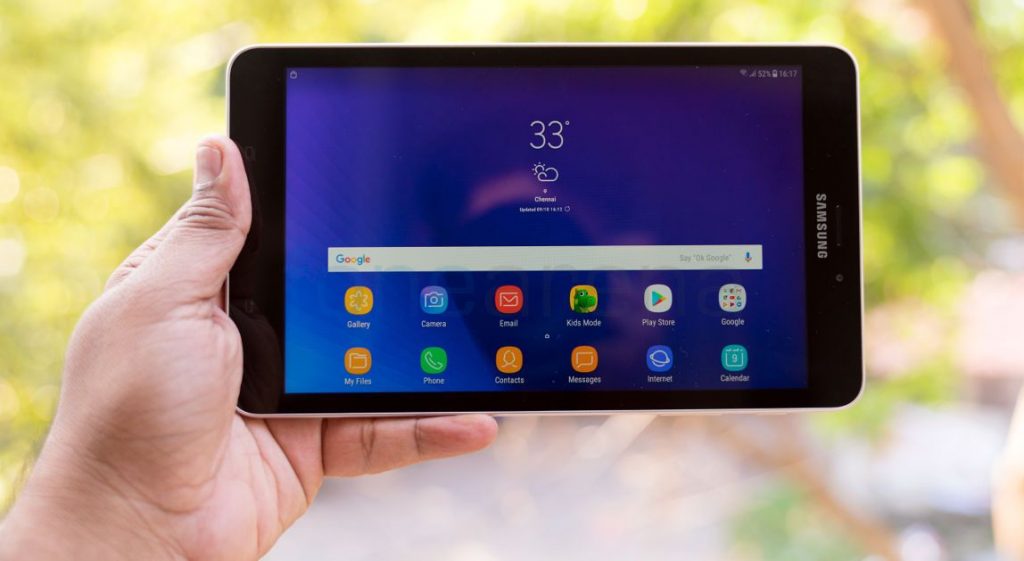 Coming to the performance, the tablet is powered by a quad-core Snapdragon 425 Mobile Platform with four ARM Cortex A53 cores clocked at 1.4GHz per core and has 2GB of RAM, which is more than enough to power the screen. It gets a bit warm on prolonged 4G usage and gaming, but it doesn’t get too hot to handle. The performance is good without any lags. It also has a 500MHz Adreno 308 GPU. Since this is not a powerful SoC the GPU is just average, so the gaming performance is not on par with other tablets. That said, check out some synthetic benchmark scores below.

Coming to battery life, the 5000mAh battery lasts for more than a day with average use since the tablet has a low-resolution display. It should last for the whole day with heavy use if you are binge watching a series, but with 4G browsing and casual gaming, it will last less than a day. Since it doesn’t have support for fast charging, it took 3 hours and 15 minutes to charge the tablet from 0 to 100%.

Overall the Galaxy Tab A 2017 is a decent mid-range tablet from Samsung at a price tag of Rs. 17,990, but it is slightly costly compared to other tablets that offer a 1080p screen. It has 4G VoLTE calling support, which is rare in tablets, offers decent performance and good battery life as well, but it lacks most important sensors and is a bit bulky for an 8-inch tablet, especially for voice calling. It is available from Amazon.in, Flipkart and other online stores as well offline stores. To summarize, here are the pros and cons of the tablet.