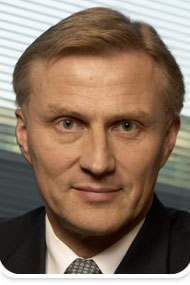 Anssi Vanjoki who is currently heading the Nokia Mobile Solutions unit has resigned from the company. It is important to note that he was the same took responsibility of the Fight Back by the Finnish phone maker. Did Anssi resign due to the failure of the N97 or was he upset at OPK’s removal ?

Ironically , he would still be at Nokia World as he has a 6 months notice period. Here is the press release

Anssi Vanjoki resigns from Nokia
September 13, 2010
Espoo, Finland – Nokia announced today that Anssi Vanjoki, Executive Vice President and a member of Nokia Group Executive Board has given notice of resignation from Nokia. Vanjoki, who currently heads Nokia’s Mobile Solutions unit, has six months notice period and he will continue in his current tasks for the time being.

“I felt the time has come to seek new opportunities in my life,” Anssi Vanjoki says. “At the same time, I am one hundred per cent committed to doing my best for Nokia until my very last working day. I am also really looking forward to this year’s Nokia World and sharing news about exciting new devices and solutions.”