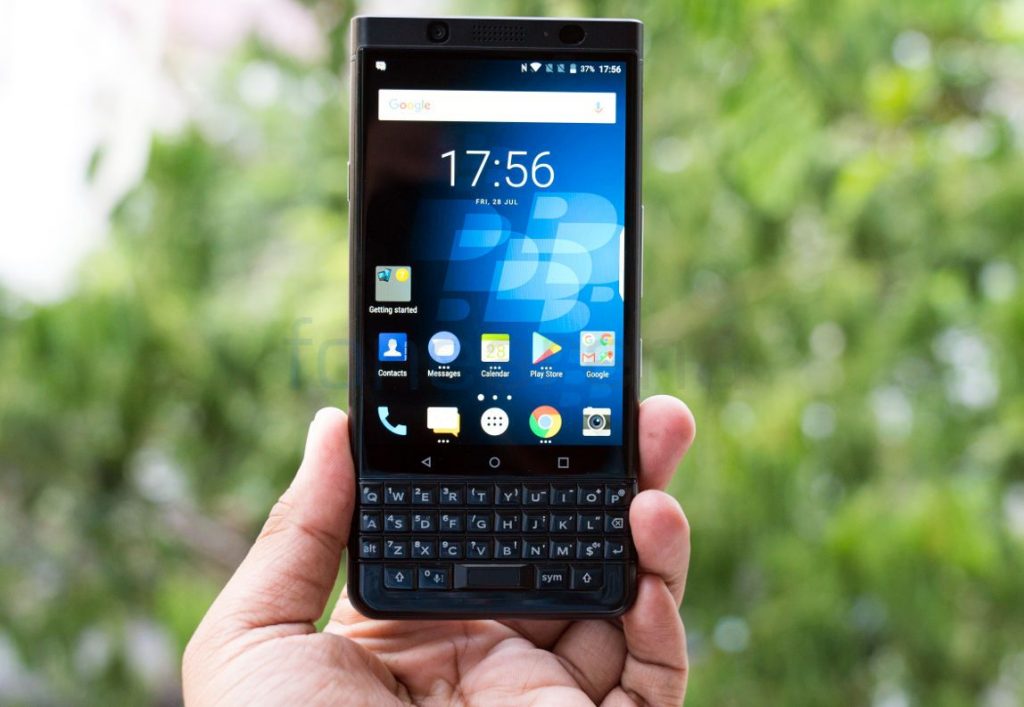 BlackBerry KEYone is the second Android smartphone from the company after the Priv to come with BlackBerry’s signature physical QWERTY keyboard that you rarely see on Android smartphones these days. TCL Communication Technology (TCT) made the phone in some countries like the U.S. but the phone is made and sold by Optiemus in India, Nepal, Sri Lanka and Bangladesh. How good is the smartphone? Let us find out in the review. 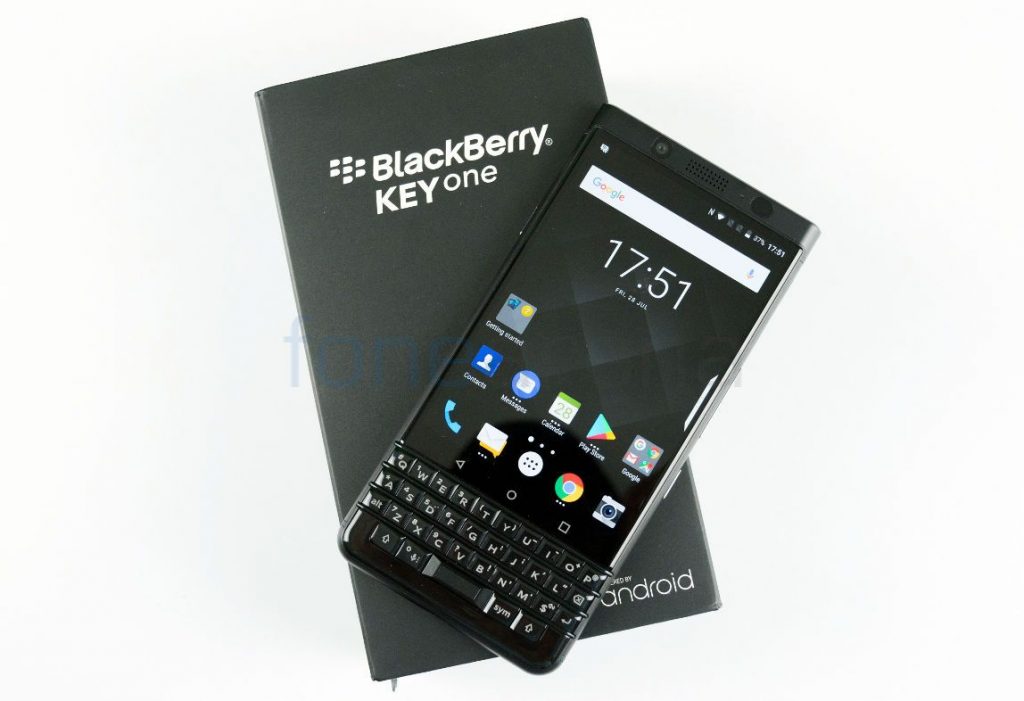 We had unboxed the KEYone recently, check out the video below. 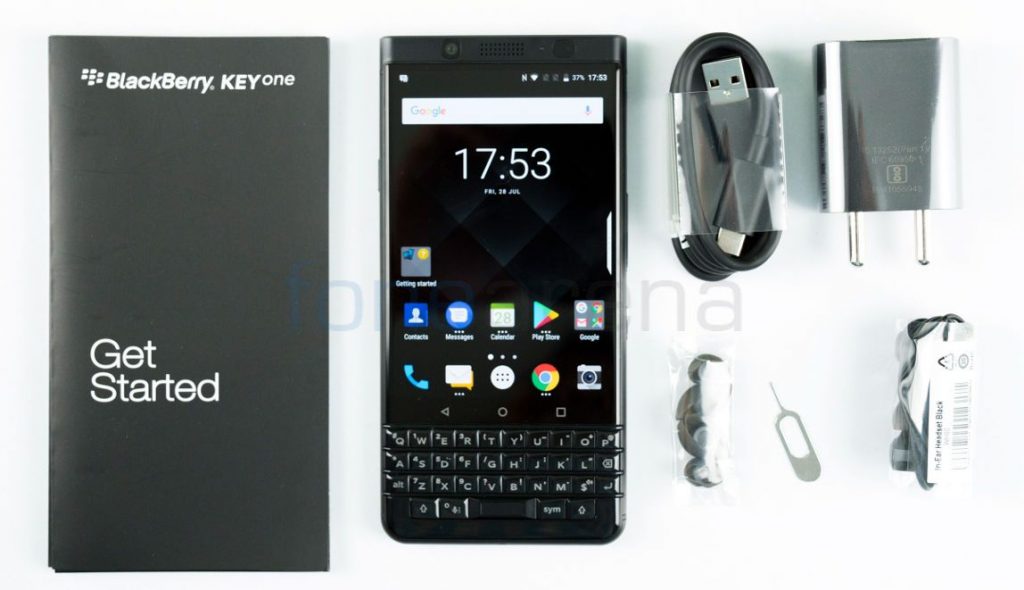 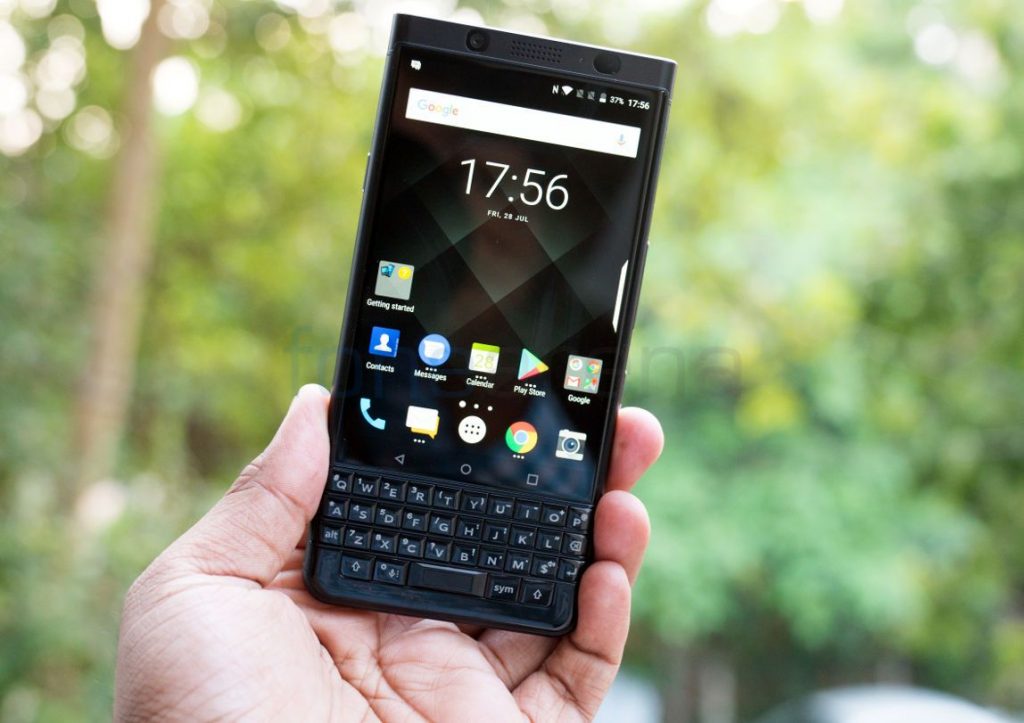 The KEYone has a 4.5-inch display with a resolution of 1620 x 1080 pixels, pixel density of 433 PPI and aspect ratio of 3:2. The display is good offering vibrant color output and the sunlight visibility is good as well. This time BlackBerry has opted for a LCD screen compared to AMOLED screen on the Priv. The display is also small. After using phones with large displays of 5.5-inch or more, using this phone with a small display needs some time to get used to. Also, the phone is definitely not for media consumption since you get black bars when viewing YouTube videos, but when you play videos on the video player, you can stretch it to fill the screen.

The phone has a scratch-resistant glass protection, but the company doesn’t say if it’s Corning Gorilla Glass. 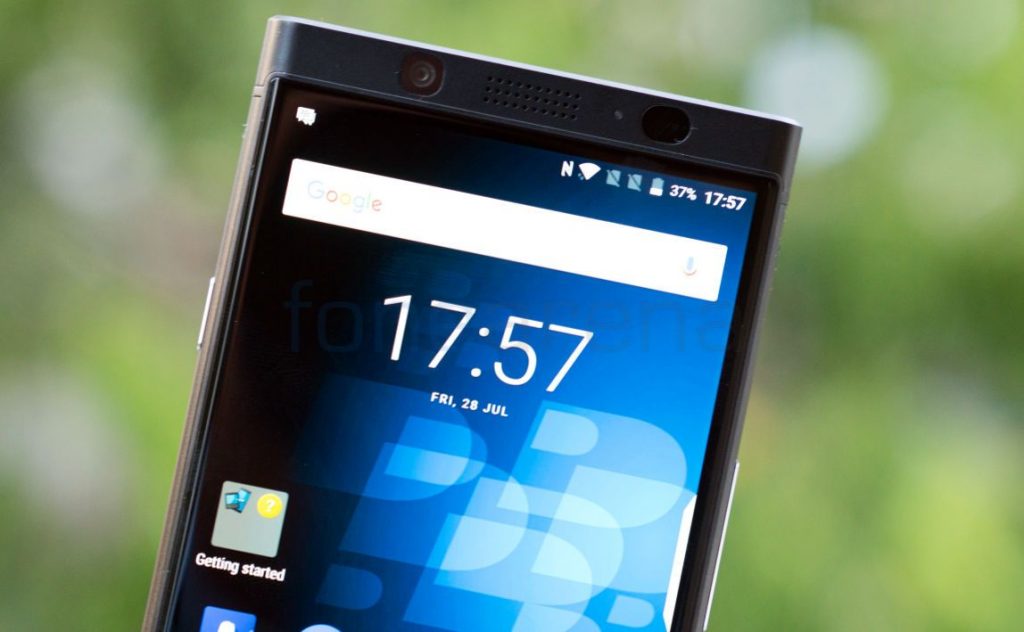 On the top, there is an earpiece with notification LED on the right side of it and an 8-megapixel camera on the left side. On the far right, there are the usual set of proximity and ambient light sensors. The phone also has magnetic sensor (magnetometer) and gyroscope. 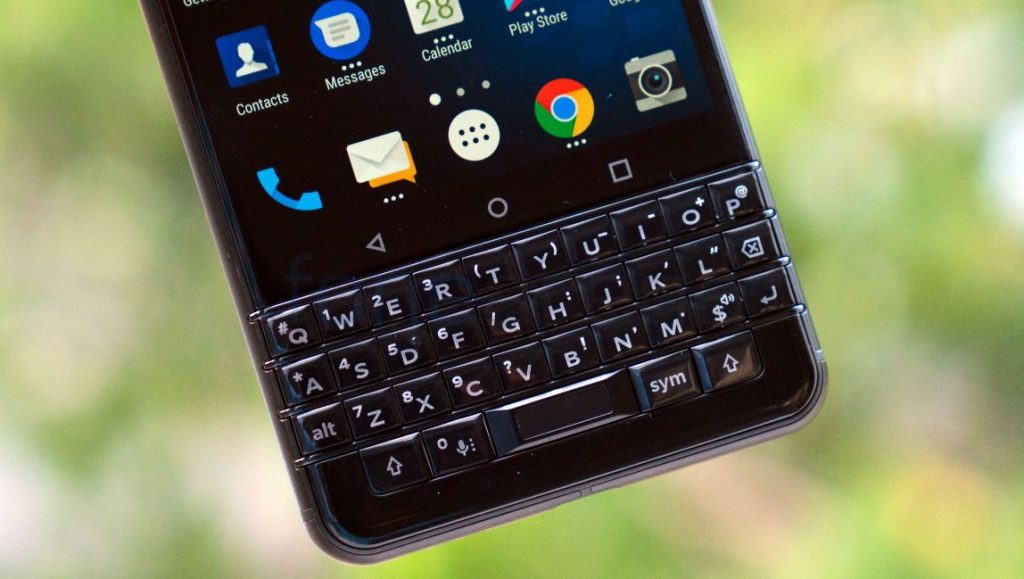 Below the screen there are the usual set of capacitive touch buttons for back, home and recents. These are backlit and offer haptic feedback when pressed. Wish it had on-screen keys so that the display size could have been increased.

The 4-row keyboard is comfortable to type and will be useful for business users who type a lot of emails. The keyboard also has gestures, like the BlackBerry Priv and Passport which comes in handy when scrolling through a long web page. The keys might be small if you have huge hands, but these are well-spaced for normal users so it is easy to type. It even offers prediction, which has improved a lot compared to Priv. There is a fingerprint sensor built into the space bar of the keyboard.

The phone has a brushed anodized aluminum frame that doesn’t slip out of the hand easily. It is 9.4mm thick, same as the Priv. It is 149.3mm tall and 72.5mm wide, similar to most of the phones with a 5.5-inch screen, so it is easy to carry in your pocket. 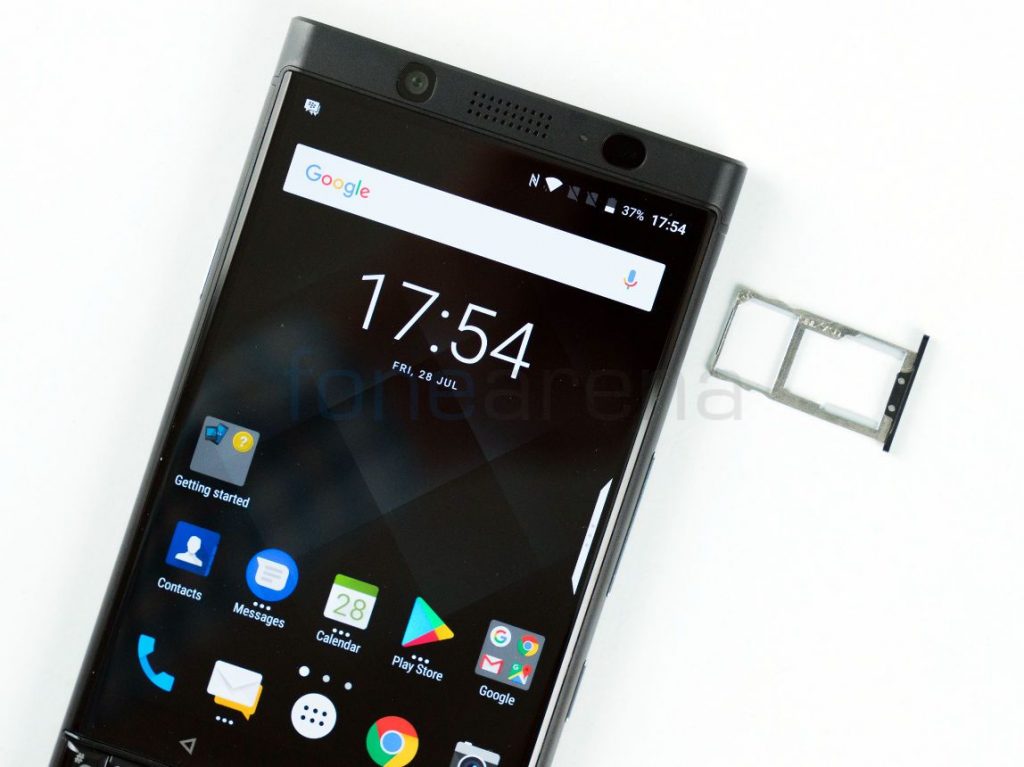 The phone has a hybrid SIM slot that takes two nano SIMs or a nano SIM and a microSD card slot. Wish the company had gone with dedicated SIM slots, but this is better than the single SIM support on the Priv, also 64GB of storage is more than enough for a lot of apps and media. 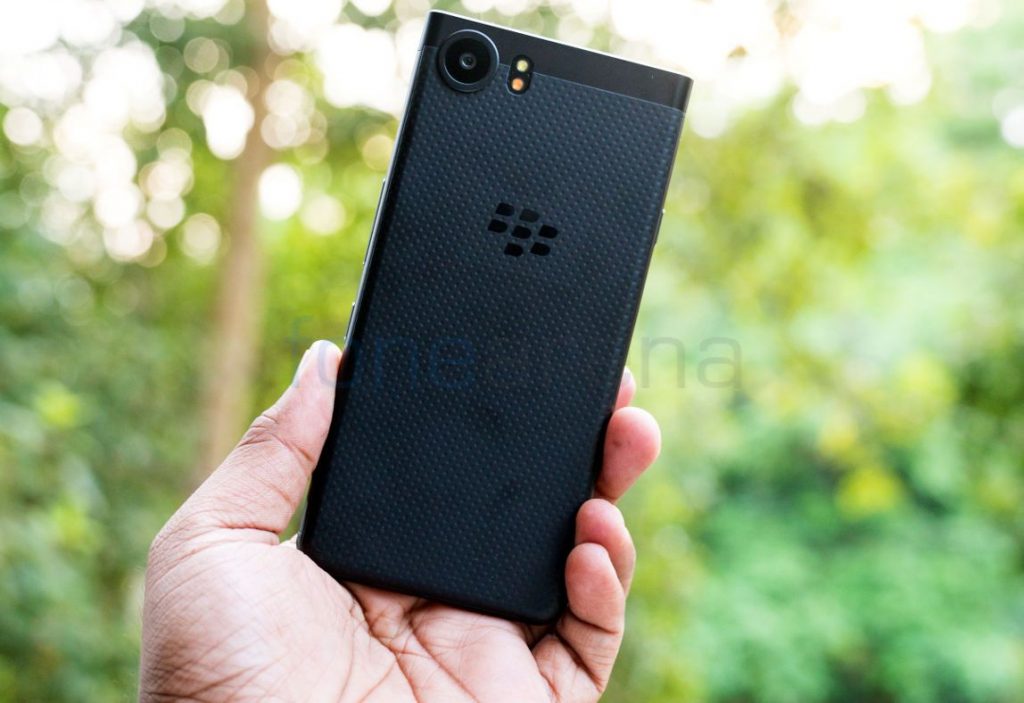 The phone has a 12-megapixel camera on the back with dual-tone LED flash, plastic finish on the top and below that there it has textured finish. The BlackBerry logo is also present in the center part of the back. It has a 3505mAh built-in battery. The phone weighs 180 grams, slightly heavier than most of the phones due to the metal body. Overall the phone has a solid build quality. 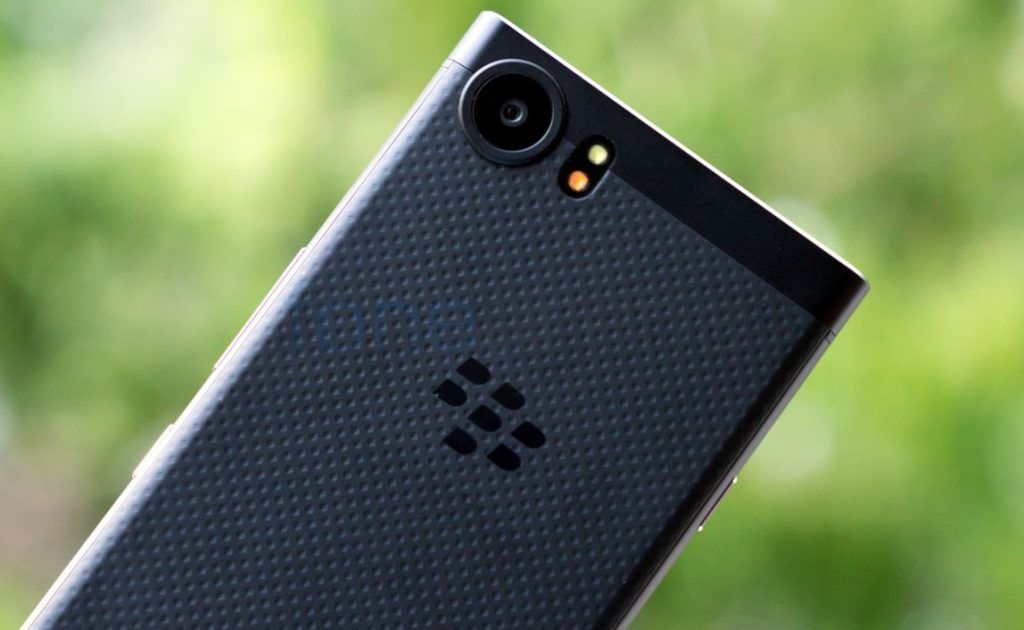 It has a 12-megapixel rear camera with dual-tone LED Flash, Sony IMX378 sensor, the same , 1/2.3” sensor present in the Google Pixel with 1.55μm pixel size, f/2.0 aperture and phase-detection auto-focus (PDAF). It has EIS but lacks OIS.

The phone has a 8-megapixel front-facing camera with 1.12µm pixel size, f/2.2 aperture, which is good for selfies and video chats. 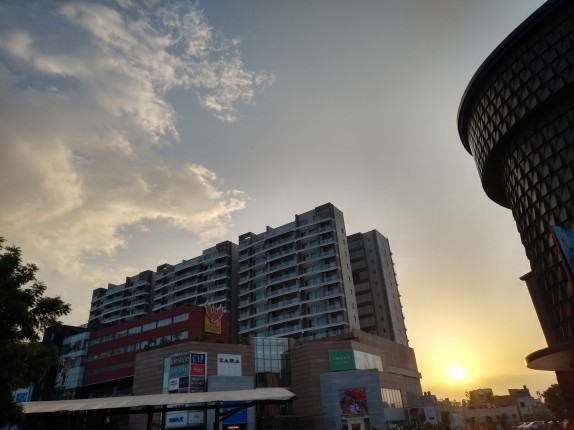 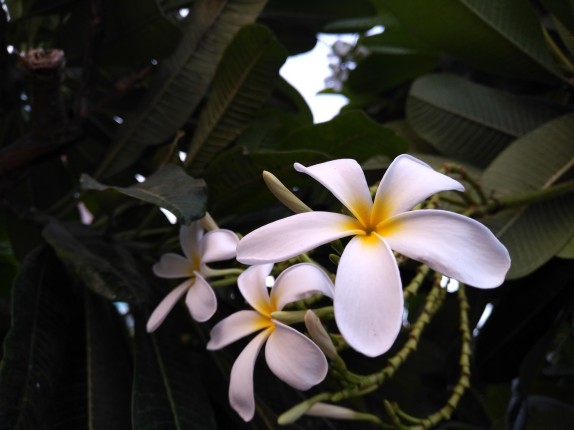 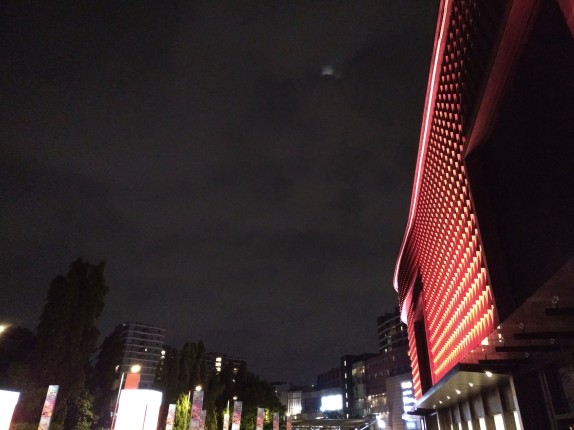 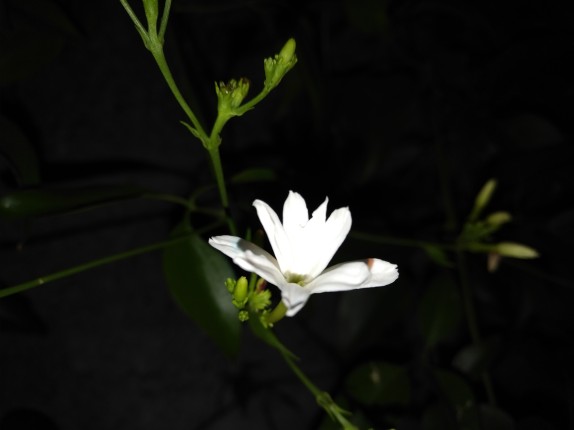 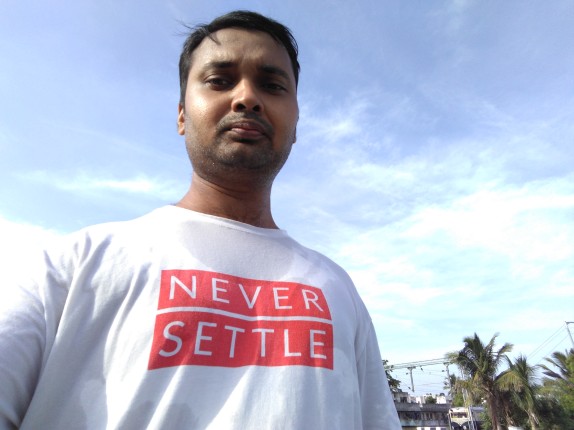 It can record videos at a maximum of 4K UHD (3840 x 2160 pixels) resolution at 30 fps, 1080p full HD or 720p resolution at 60 fps and can also record slow motion 720p video at 30 fps. Video is good and doesn’t miss out on details. Audio is crisp, thanks to the secondary microphone. Check out the video samples below.

It runs on Android 7.1.1 (Nougat), which is almost stock with several custom features added by BlackBerry. There is BlackBerry Device Search app that lets you search the device for files, apps, help, and more. You can also type an Instant Actions command in the search field to perform a task quickly.

The BlackBerry Productivity Tab provides quick access to upcoming events, new messages, tasks, and contacts. The tab is available on all device screens. By default, the tab is turned on and is centered on the right edge of the device screen. You can also turn off the tab, swipe
down from the top of the screen once using two fingers, or twice using one finger. It also has BlackBerry hub that shows text messages, email, Twitter and more in a single screen, which is useful.

The phone can perform a specific action when you press the Convenience key (the round key on the right side of the phone). The phone also has gestures. When it’s enabled from the settings, to quickly open the camera, you can press the power button twice.

Out of 4GB RAM, you get 3.6GB of usable RAM, out of which about 2.3GB of RAM is free when the default apps are running in the background. Out of 64GB of storage, you get 50GB of usable space. It doesn’t have option to move apps to SD card.

Google Play Music is the default music player. It also has equalizer, bass boost and also lets you enable surround sound when you insert earphones. The loudspeaker output is pretty good. Thanks to the placement on the bottom, audio doesn’t get muffled when the phone is placed on a flat surface. Audio through bundled earphones is also good. It also has FM Radio, but it doesn’t have recording option.

It has stock dialer and the Google Messenger is the default messaging app. Since this is a dual SIM phone, you get option to select either SIMs when calling or sending text message. There are no call drops and the earpiece volume is good.

It has 4G LTE connectivity with support for several 4G bands, including support, including VoLTE support for Reliance Jio. Both the SIMs support 4G, but you can enable 4G only in one SIM at a time, while the other goes to 3G. Since this is a dual SIM phone, you can set preferred SIM for voice call, text and data. It has 802.11 ac (2.4 & 5 GHz) MIMO, Wi-Fi Direct, Bluetooth 4.2 LE and NFC. It supports Android Pay in some countries where it is available. 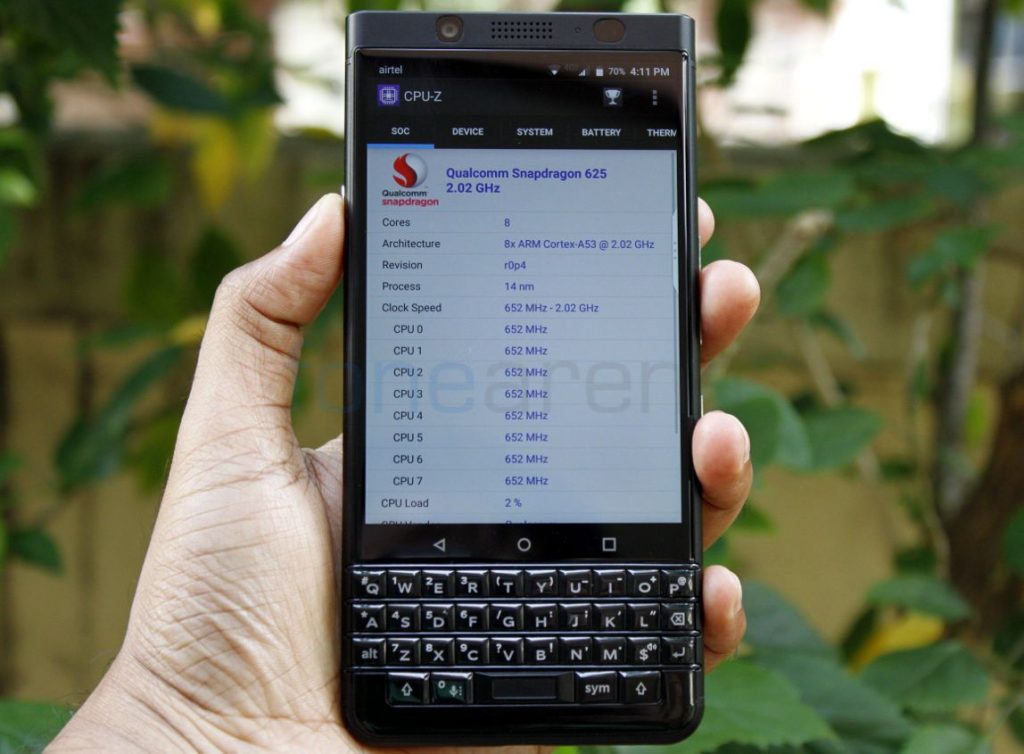 The phone is powered by a 2GHz Octa-Core Qualcomm Snapdragon 626 14nm Mobile Platform with Adreno 506 GPU. There are no lags and 4GB of RAM is enough to run several apps in the background. It gets a bit warm when using 4G and during intensive gaming, but it doesn’t get too hot.

It has 50MHz Adreno 506 GPU. We tried few games, which were smooth and graphics were good too. Since this has a small screen, gaming experience is not great. Still for the price the Snapdragon 625 is a bit outdated. Wish the company had gone with the Snapdragon 820 or 821. Check out some synthetic benchmark scores. 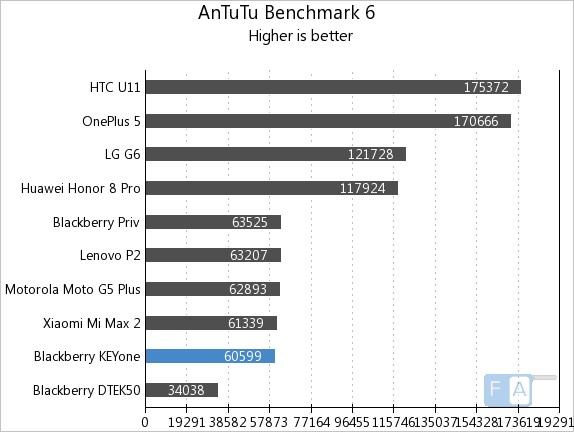 It managed to score 60599 points in the AnTuTu Benchmark 6. 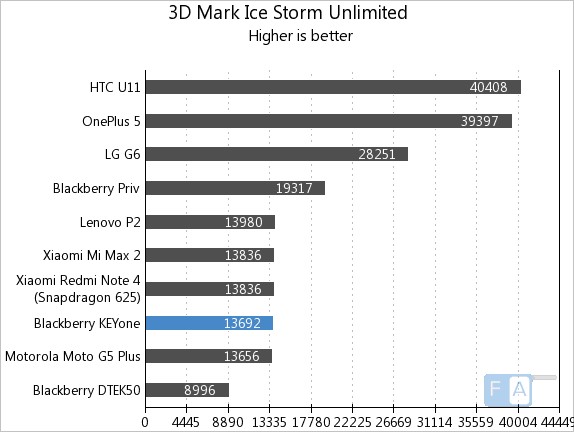 It managed to score 13692 points in the 3D Mark Ice Storm Unlimited GPU benchmark. As you can see, most of the flagship phones with better SoCs are at the top of the chart while phones with Snadpdragon 625 and similar SoCs are at the bottom. This doesn’t mean that the performance of the phone is bad. This is enough to power the small 4.5-inch screen in the phone. 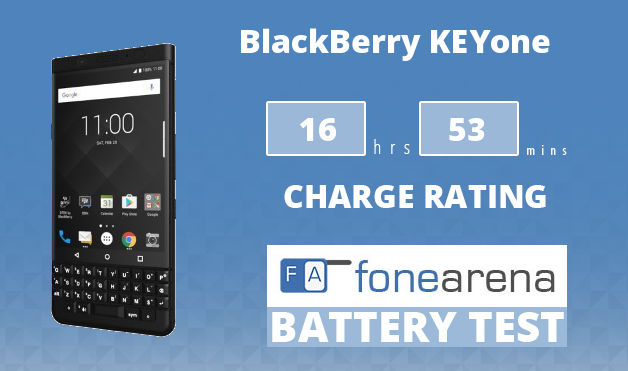 The smartphone has a 3505mAh built-in battery, which is pretty good, which lasts for the whole day even with heavy use and lasts for more than a day with average use. This is mainly due to the small 4.5-inch screen and the power-efficient Snapdragon 625. It has battery saver option that turns on automatically when you reach a certain threshold to extend the battery life.

There is also boost mode that optimizes charging time by minimizing the phone’s power usage when it’s plugged in. 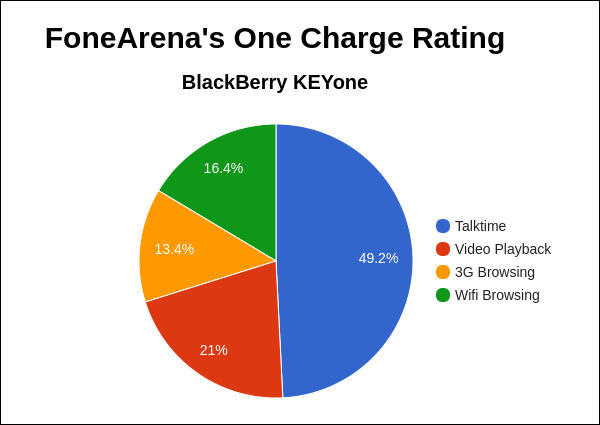 It supports Qualcomm’s Quick Charge 3.0 for faster charging. BlackBerry says that it can be charged up to 50% in just 36 minutes, the phone gets charged fully in 1 hour and 46 minutes. It achieved a One Charge Rating of 16 hours and 53 minutes in our battery test, which is pretty good. Check out the complete set of battery life test results here.

The BlackBerry KEYone is targeted at the business users or those who loved physical keyboard on old BlackBerry phones and want to get the same experience on Android phones. In this segment there is no competition, still a price of Rs. 39,990 is a bit high. It is a good thing that India has got the Limited edition Black version with 4GB of RAM and 64GB of storage, compared to 3GB of RAM and 32GB storage in the Silver version.

Overall, the KEYone offers good performance, has a really good camera, comes with a physical QWERTY keyboard and the battery life is good as well. If you can manage the small display, hybrid SIM and can spend the amount, go for it. It will be available exclusively on Amazon.in starting from August 8th. To summarize, here are the pros and cons of the smartphone.