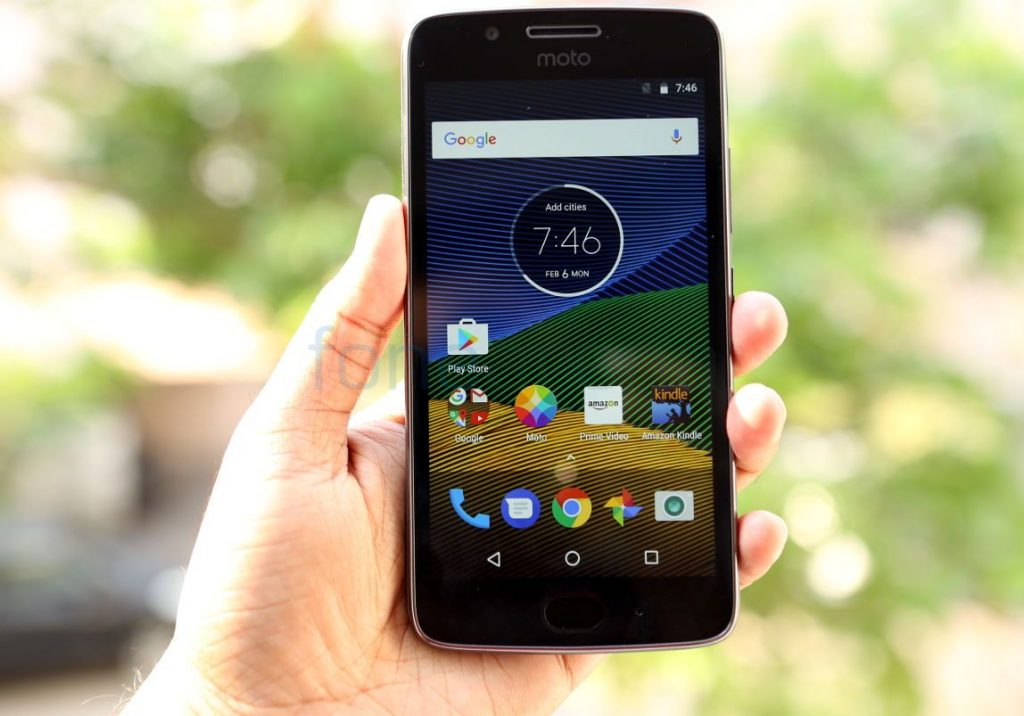 Moto G5, smaller version of the Moto G5 Plus was launched in India last month for Rs. 11,999. This has a smaller 5-inch display, has a removable battery for the first time in the ‘Moto G’ series and also comes with a Water repellent nano-coating similar to other ‘Moto G’ smartphones. Is the smartphone worth the price? Let us find out in the review. 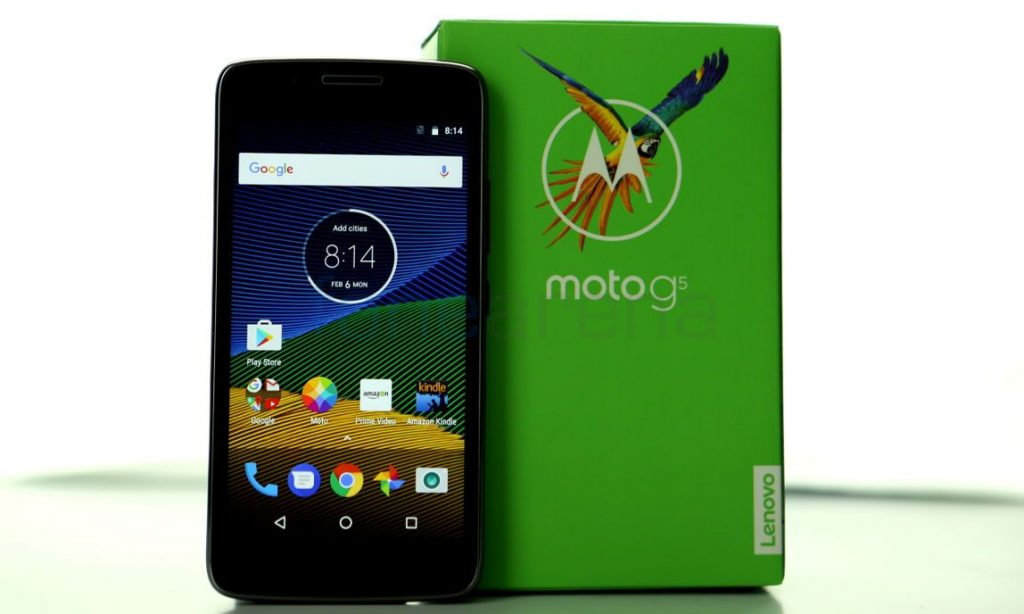 We unboxed the Moto G5 recently, check out the video below. 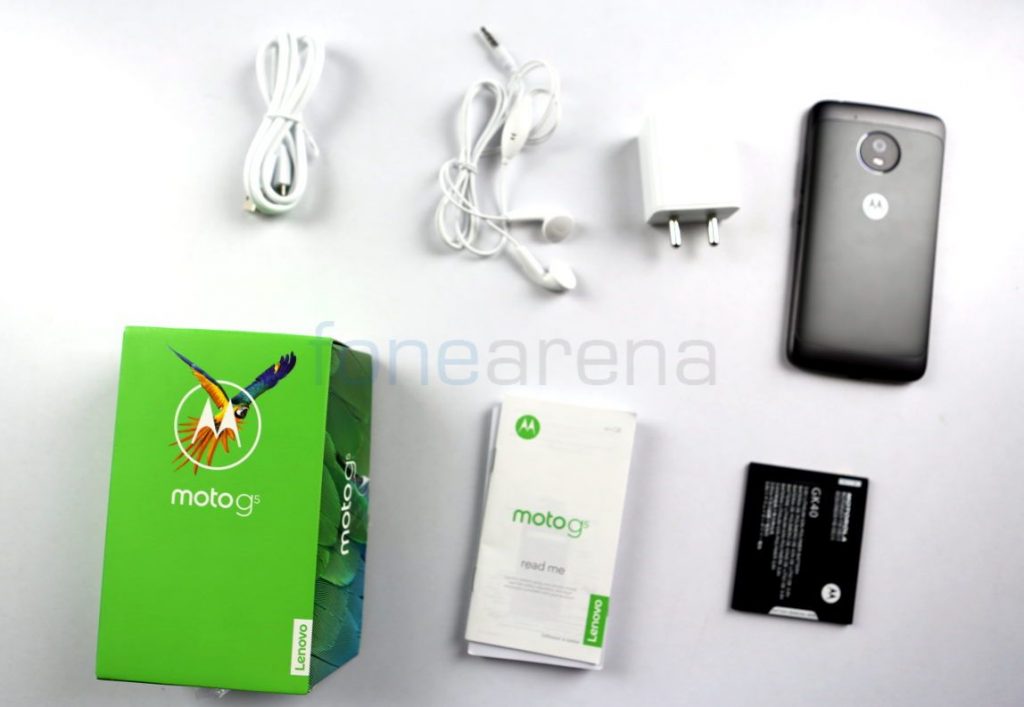 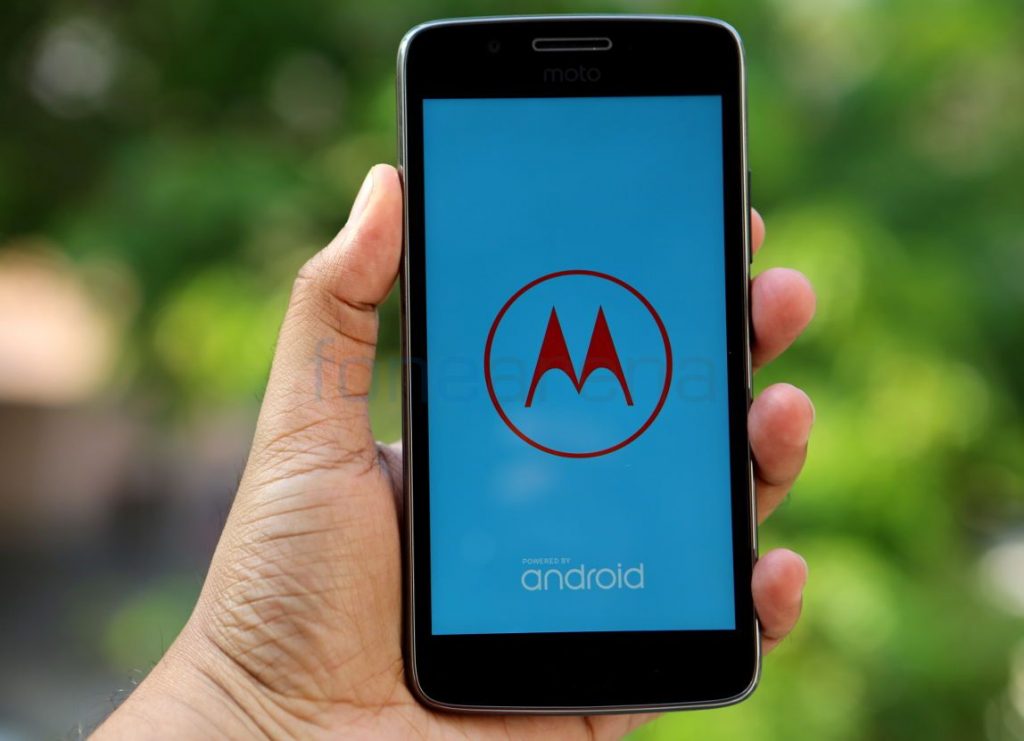 Moto G5 has a 5-inch display with a pixel resolution of 1920 by 1080 pixel and a pixel density of about 441 PPI. This display is bright and offers good color output as well. The sunlight legibility is good as well. Black bezel on the sides of the display looks a bit weird. The phone also comes with Corning Gorilla glass 3 protection. 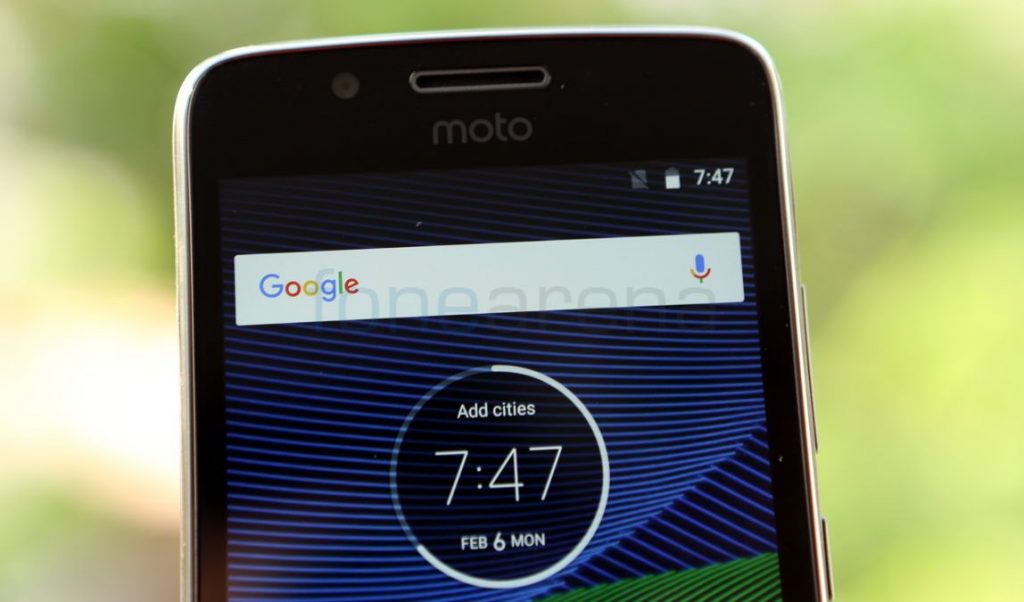 On the top it has an earpiece along with loudspeaker embedded into it and a 5MP front-facing camera, same as the Moto G5 Plus. There are also the usual set of proximity and ambient light sensors on the right side of the earpiece but it misses out on notification LED. It has gyroscope for VR but it lacks a magnetic sensor or magnetometer. 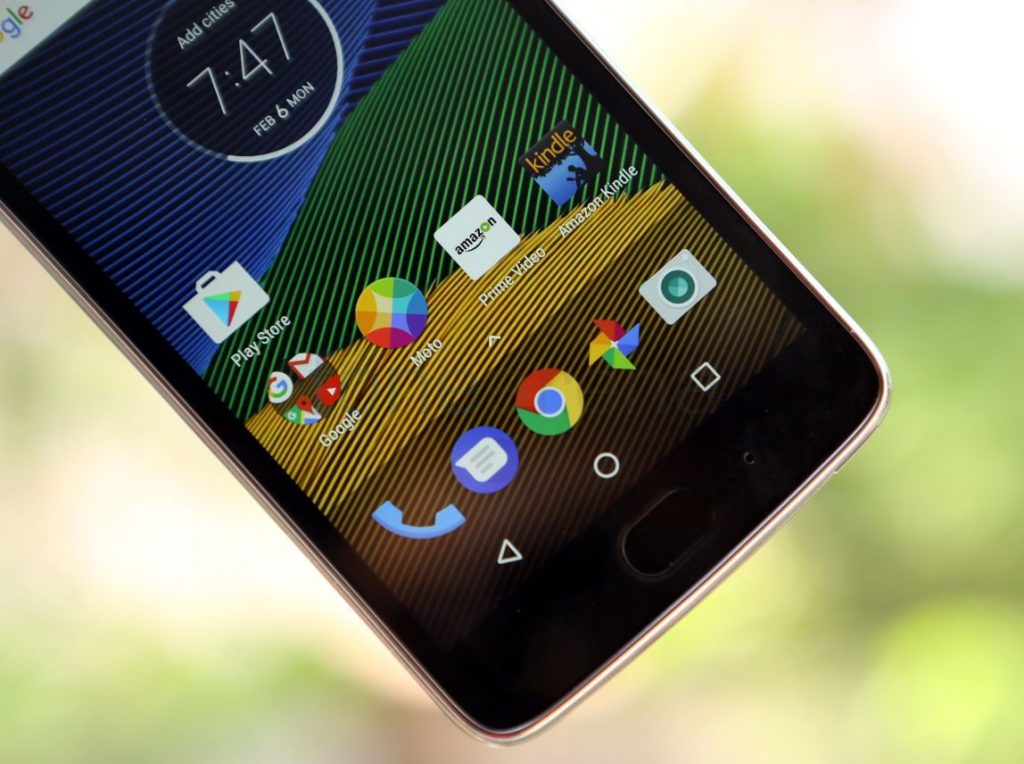 On the right side there is a volume rocker and a power button that has tiny grooves. Since the back cover extends to the side of the phone, these buttons are attached to it. There is nothing on the left side of the phone. It is 9.5m thick and has a shiny metal rim running around the phone. The 3.5mm audio jack is present on the top and the micro USB port is present on the bottom along with a tiny ridge to open the back cover. 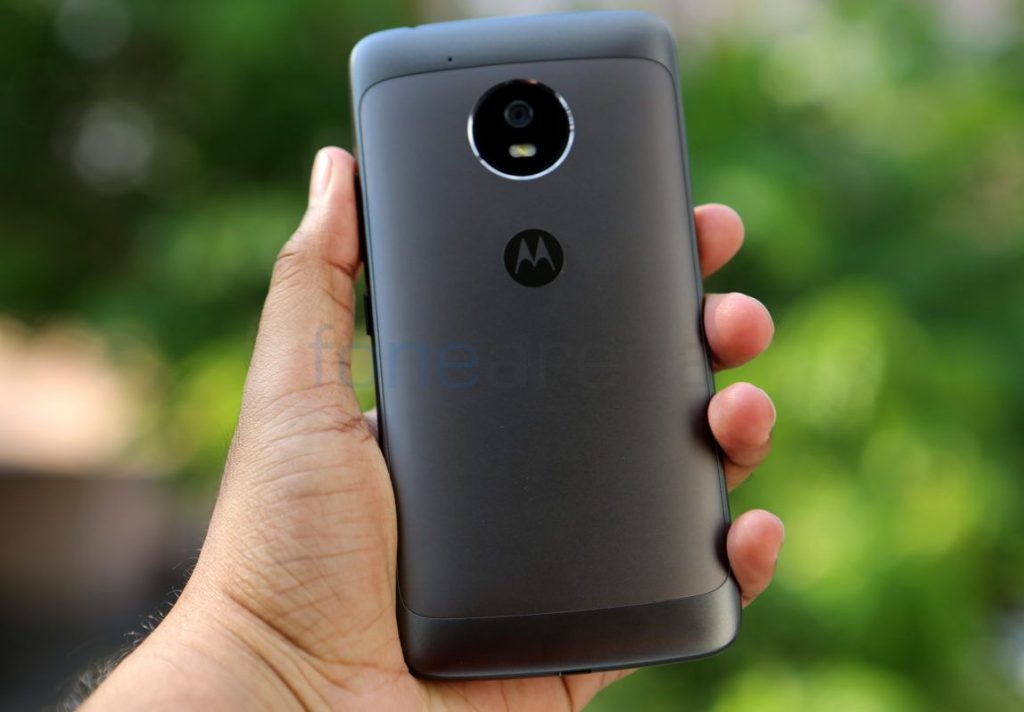 On the back there is a 13-megapixel camera with f/2.0 aperture, LED flash and PDAF. Even though the phone is comfortable to hold, it is 144.3mm tall and 73mm wide, slightly bigger than the Moto G3 that has the same 5-inch HD display. But it weighs just 144.5 grams. 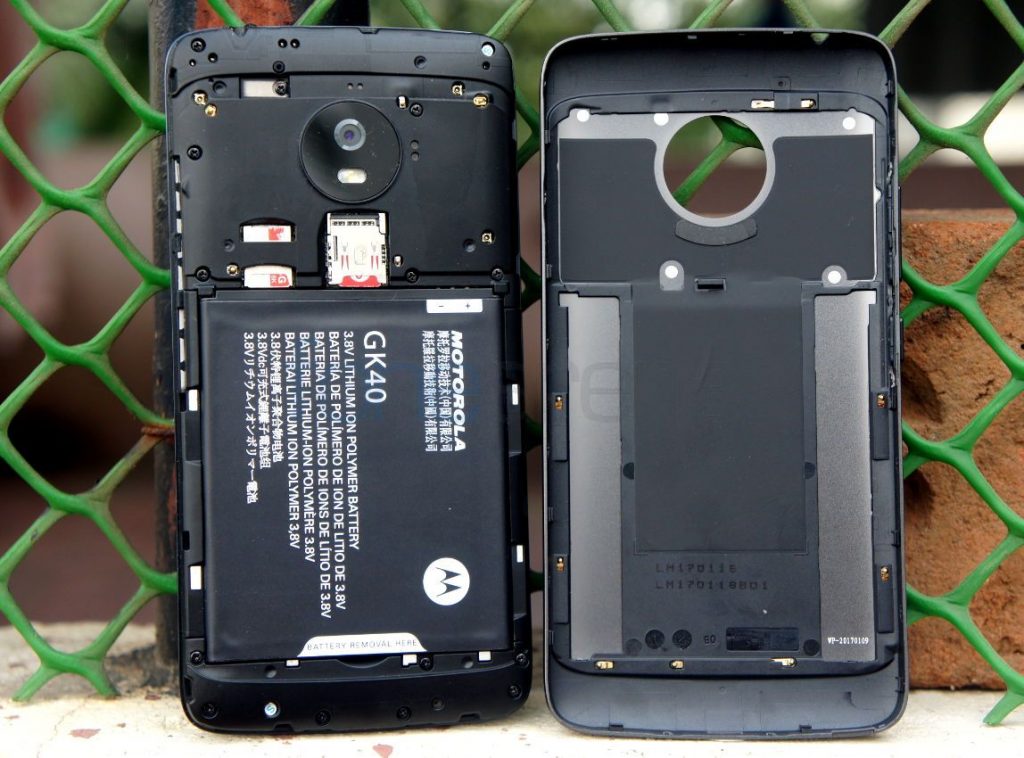 Opening the back cover reveals the slots below the camera and the removable battery. The back cover is not fully metal since the top and bottom part of the back is made of plastic for antenna provision. This part gets scratch easily when you place the phone on a rough surface so it is recommended to use a case. 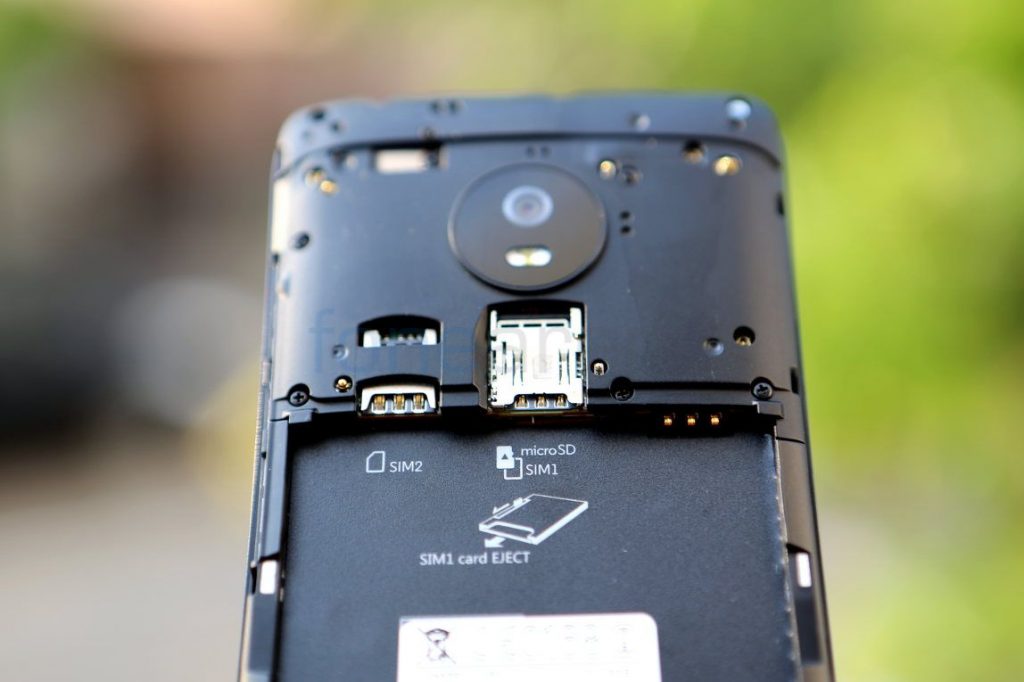 Unlike some of the phones that comes with hybrid dual SIM slots, this has dedicated nano SIM slots and a microSD card slot. You need to remove the battery to insert or remove the SIM or a microSD which might be a hassle for some. The primary SIM goes under the microSD so you need to pull down the pin on the left side to eject the card. 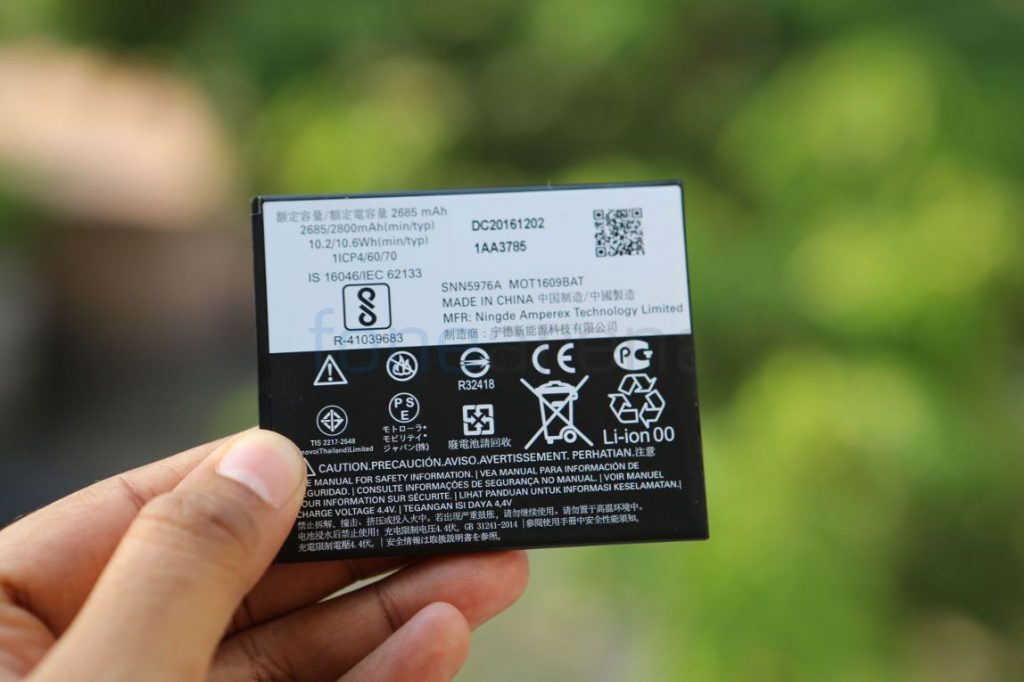 While everyone moving to built-in battery, the Moto G5 is one of the few smartphones with a removable battery. The 2800mAh (typical) / 2685 (minimum) battery also comes with rapid charging. Maybe if the company had used a built-in battery like the Moto G5 Plus, it could have packed a slightly bigger capacity battery. Overall the phone has a good display and build quality. 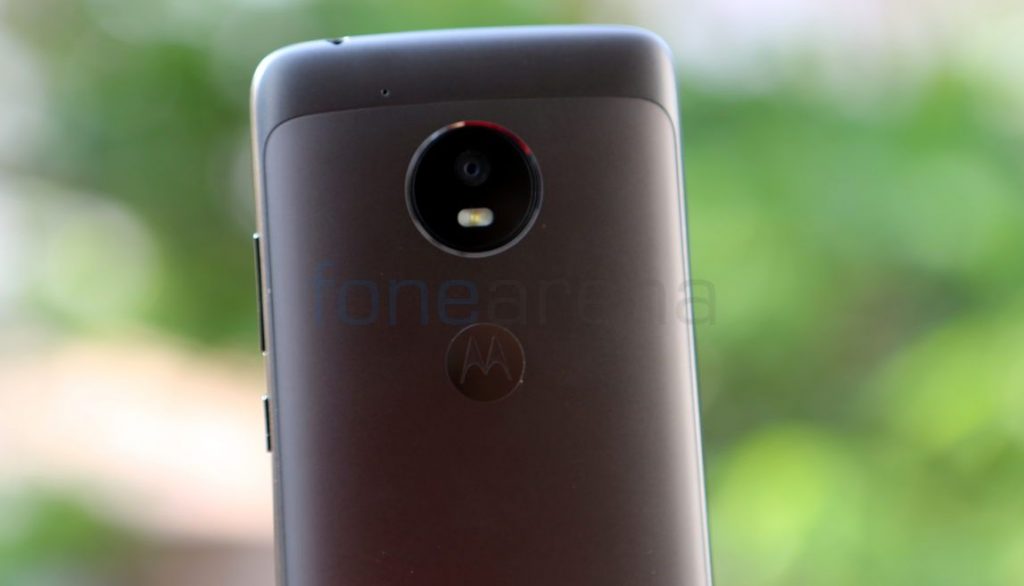 The Moto G5 has a 13-megapixel camera with f/2.0 aperture, LED flash and it has PDAF. It also has a 5-megapixel front-facing camera, OmniVision OV5693 sensor and f/2.2 aperture same as the G5 Plus.

The camera UI is simple with toggles image, video, panorama, slow motion and manual mode that lets you adjust white balance, shutter speed, ISO and more. There is a camera shutter on screen button and toggles for front and rear cameras on the right side. On the left side there is a timer (3 or 10 seconds), Flash toggle (Auto, On, Off) and HDR toggle (Auto, On, Off). It has quick capture mode that lets you twist the phone twice to open the camera or switch between the front and back cameras. You can also launch the camera when you double press the power button even when the phone is locked. Front facing camera has face beauty option and screen flash.

Coming to the image quality. Daylight shots came out well, but some images came out dull during cloudy or poor lighting conditions. Macro shots were good but it is hard to focus small objects. HDR shots were pretty good with improved contrast and saturation. Low-light shots had noise but images were not that bad. Images with flash were decent. Even though it has single LED flash, it might be overpowering for closeup shots. The front-facing camera is decent for selfies and video chats. 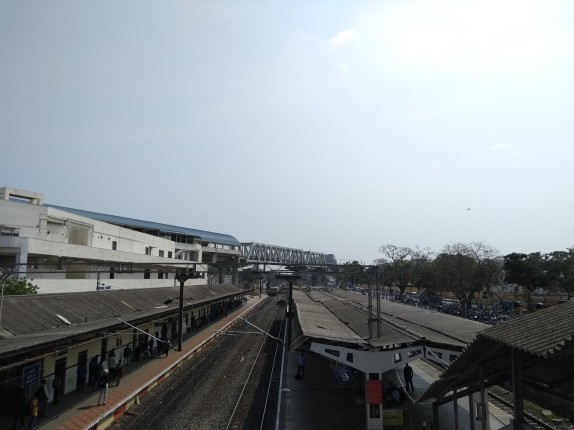 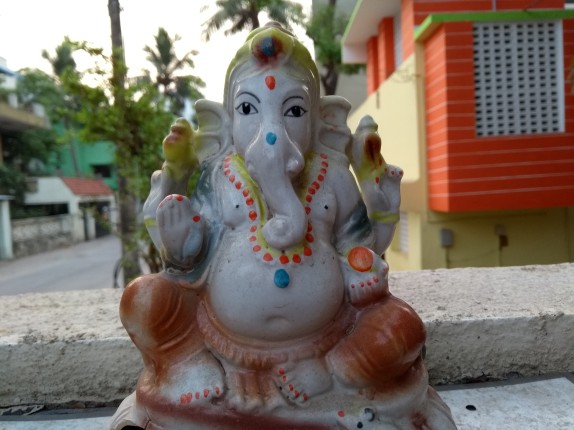 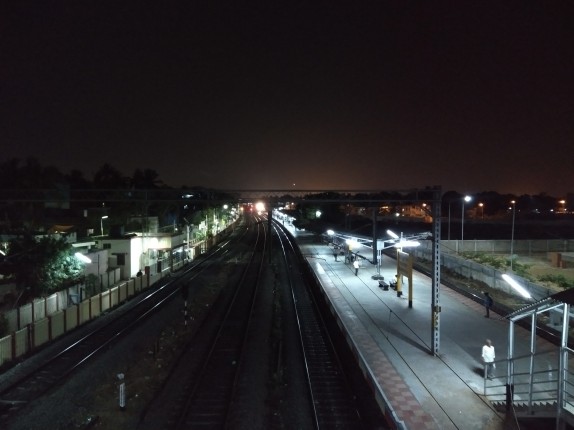 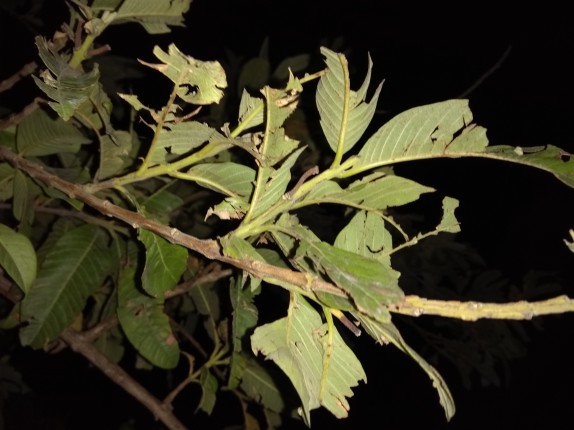 Check out the complete set of Moto G5 camera samples here. It can record videos at 1080p Full HD video resolution. There is also HDR option for video. Quality is good. Thanks to the secondary microphone, audio is crisp. It can also record slow motion videos at 120 fps but only at qHD (960 x 540 pixels) resolution so it is not crisp. Check out video samples below.

The Moto G5 runs on Android 7.0 (Nougat) with Android Security patch for January 1, 2017 which is stock with added Moto features such as Moto app. The company has not announced when it will get the Android 7.1 update. It comes with Home app that is similar to Google Now Launcher but it replaces the apps button on the bottom tray with another slot for icon. You can swipe up to reveal all the apps. You can edit quick settings icons, change the position and replace it with few more in the options. There is nothing to mention about the software in specific since it offers stock Android experience.

It only comes only in 3GB RAM with 16GB storage variant, you get 2884MB of usable RAM, out of which 1.9GB of RAM is free on boot with just the default apps running in the background. Out of 16GB of internal storage you get only 10GB of usable storage since OS and Apps take up 6.48GB of storage. Since this runs on Nougat, you can use the microSD as the internal storage.

It also offers several functions with the one button nav option so there is no need to use on-screen back, home, and overview buttons. A simple swipe or tap of the fingerprint reader can trigger these functions. This also gives haptic feedback when an action is performed.

Apart from the usual set of Google apps and utility apps, it has Kindle, Amazon and Amazon Prime Video Apps since the smartphone has been launched exclusively on Amazon.

It has Moto Actions that has six features – one-button nav, double karate chop to turn the torch on/off, Twist the phone to launch the phone’s camera to capture images quickly, Swipe up, left or right to shrink the screen, pick up to stop ringing and flip the phone for ‘do not disturb’.

The Moto Display offers time at a glance when you pick up the phone and also offers notifications on the black screen when you receive them. You can swipe up to go to particular app that sent the notification or swipe either left or right to dismiss them. Moto Display compensates for the lack of LED notification light.

Google Play Music is the default music player for playback. It also has equalizer. It has FM Radio with FM recording. It can play 1080p Full HD videos smoothly. The front-facing speaker is decent, but not the best since it is a mono speaker and not a stereo. Audio through third-party earphones is good.

It has Dual SIM option in the settings that lets you customize each SIM cards. It has 4G connectivity with support for 4G VoLTE for Reliance Jio. Both the SIM slots have 4G support, but you can use 4G on only one SIM at a time, while the other goes to 2G. There is a connection priority option that lets you choose Data or Voice. If you prefer Data, when you receive incoming calls on the non-data enabled SIM, it will go to voicemail when data is active. Other connectivity features include, WiFi 802.11 a/b/g/n (2.4GHz + 5GHz), Bluetooth 4.2 and GPS. It also has USB OTG (on-the-go) support, but lacks NFC support. 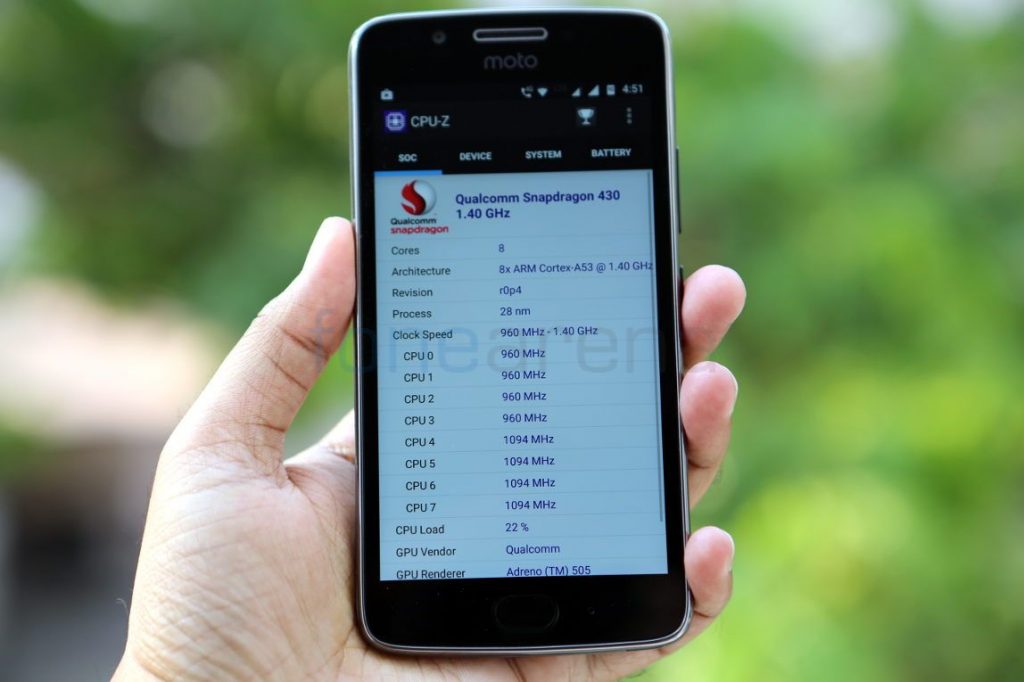 It is powered by an Octa-Core Qualcomm Snapdragon 430 64-bit processor that has eight ARM Cortex A53 cores clocked at 1.4GHz per core. The performance is good. We tested several games, which were smooth and graphics is also good, thanks to the Adreno 505 GPU. The phone gets heated quickly during intensive gaming, when using 4G and when using the camera, the same issue that was faced in the Moto G4 Plus. It gets too hot so that you can’t even place the phone on your ear to attend calls. Since this has a metal back you can easily feel the phone getting heated. Check out some synthetic benchmark scores below. 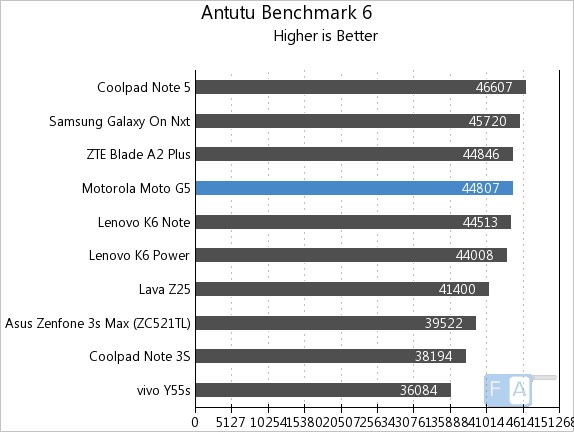 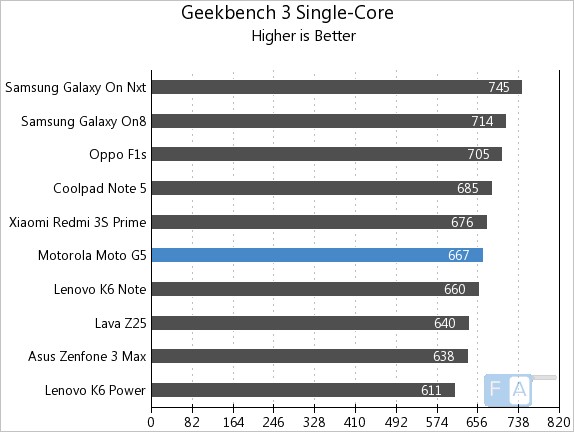 It scored 667 points in the Geekbench 3 Single-Core Benchmark. 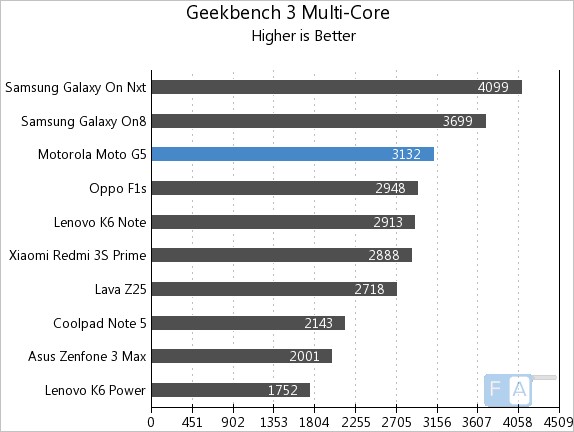 It scored 3132 points in the Geekbench 3 Multi-Core benchmark. 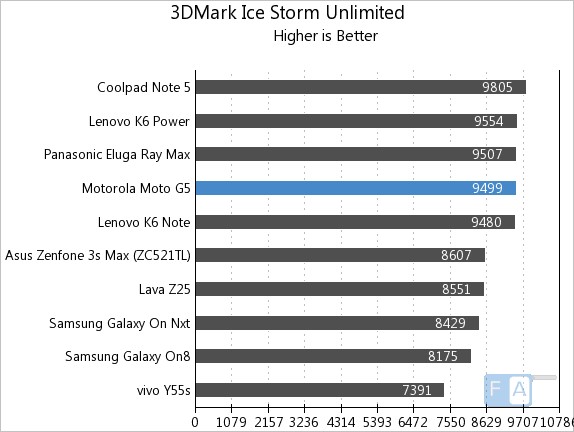 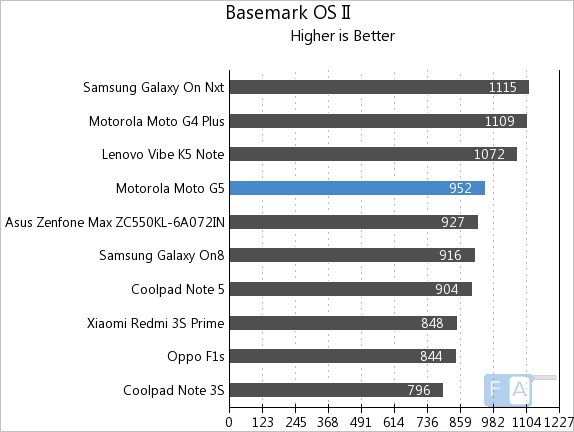 It scored 952 points in the Basemark OS II benchmark. 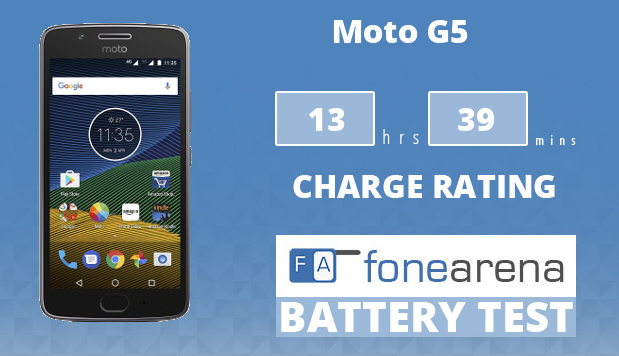 Coming to the battery life, the 2800mAh battery lasts for a day with average use but it doesn’t last for the whole day with heavy use. You can enable battery saver to extend the battery life when the battery is low. Since it comes with 10W rapid charging, it takes about 1 and half hours to charge the phone. 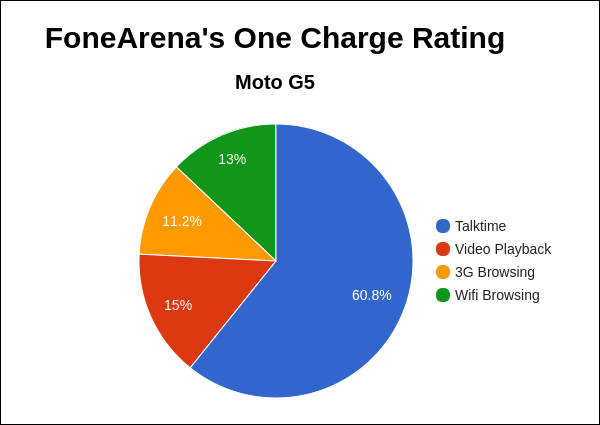 It achieved a One Charge Rating of 13 hours and 39 minutes, which is good mainly due to brilliant talk time, otherwise the rating is not impressive. Check out the complete set of battery life test results here.

Priced at Rs. 11,999, the Moto G5 is a decent successor to last year’s Moto G4 since this comes with a fingerprint sensor and comes with a better build quality. It comes with a removable battery, which is good, but the 2800mAh battery is a bit less compared to other smartphones in the same range.

Even though the phone has a good build quality, camera is decent and the performance is good, the phone has heating issues. This phone will suit those who prefer a small phone with a 5-inch screen, fingerprint sensor, dedicated SIM and microSD slots and stock Android experience. Otherwise there are a smartphones such as Xiaomi Redmi Note 4 in the same price range. The Moto G5 is currently available exclusively from Amazon.in.